Can wildfires this destructive be prevented in the future? It's complicated 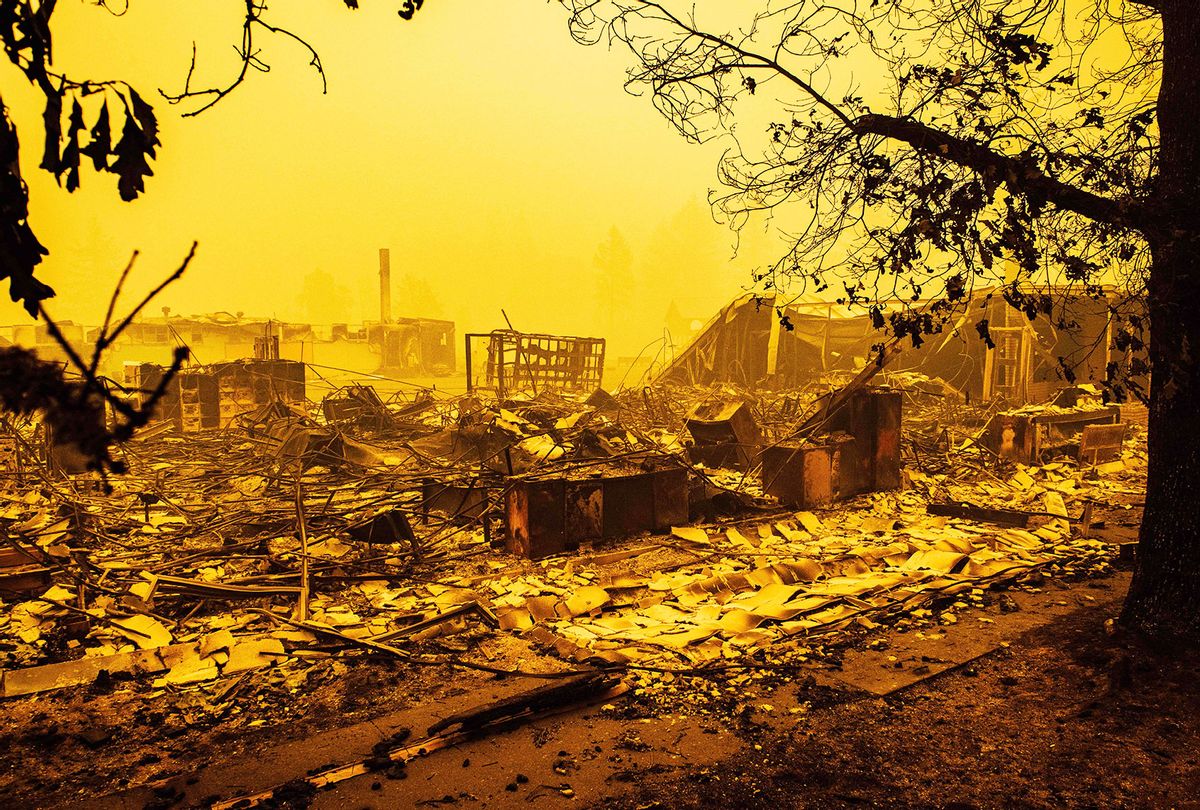 The charred remains of the Gates Elementary School, which was being used as a staging ground by firefighters, are seen after the passage of the Santiam Fire in Gates, Oregon, on September 10, 2020. (KATHRYN ELSESSER/AFP via Getty Images)
--

This year's west coast wildfire season is breathtaking in its scope and its destruction. More than 3.2 million acres have burned in California since the start of 2020; in Oregon, nearly 900,000 acres have burned in the recent series of fires, and five towns completely destroyed. To put that number in perspective: Oregon in the past decade usually would only see 500,000 acres destroyed by wildfires over the span of an entire year. Aside from the deaths and property destruction caused by these fires, their toxic smoke waves have wrought a secondary destruction on the economies and health of citizens who live in any of the nearby major cities, from Vancouver B.C. to San Diego. The extent and volume of smoke is so great that it blew over the east coast today.

Experts agree that human behavior — land management, arson, and the effects of climate change caused by human industrial activity — helped spur these massive fires, worse than any in recent memory. But if these destructive wildfires are directly and indirectly caused by humans, does that also mean humans can prevent them in the future?

That's a more complicated question to answer. Salon spoke with experts who say it's possible that we can stop them from happening to this extent, but doing so will be expensive and politically challenging.

"There's no doubt that climate change is playing a role here," Professor Dean L. Urban, Professor of Environmental Sciences and Policy at Duke University, told Salon via email. "The complicated part is separating climate from weather: climate is essentially the long-term average weather. So in the west now we're seeing a warming climate, plus a long-term drought, plus freakish short-term weather (for example, the lightning storms in [California], and the crazier than usual winds). Climate change and weather are linked, of course, in that under climate change we expect warmer weather but we also expect more extreme events."

Understanding the basis science behind climate change and wildfires will be instrumental in both preventing and containing them in the future, Urban says. It also involves understanding wildfire terms like "fine fuels," which FireWords defines as "fuel with a high surface-area-to-volume ratio that dries readily and is rapidly consumed by fire when dry," and "prescribed fire," or a fire that is deliberately set to meet ecological goals.

"In some areas forest thinning, removal of small and mid-sized trees and shrubs can make a significant difference," Norm Christensen, professor emeritus and founding dean of the Nicholas School of the Environment at Duke University, wrote to Salon. "This is, however, expensive ($2,000 to $3,000 per acre). Logging that does not remove these fine fuels (non-commercial) will only make matters worse. Prescribed fire can be useful in some locations, but is not without risk and is also expensive. It also is challenging from an air-quality standpoint. Land planning and zoning must be considered for the future as well."

He added, "In the long term, we must get much more serious about managing climate change."

Urban elaborated on the importance of gaining control over natural fuels that exist in America's forests, writing to Salon that policymakers need to create "fuel breaks, either natural (rivers, roads) or man-made with bulldozers. These can help protect humans and infrastructure locally."

Professor Francis E. Putz, botanist at the University of Florida, explained that virtually any solution to the wildfire epidemic in America will cost a considerable amount of money.

"It costs money (or you potentially make less money) to manage forests properly," Putz explained. "Companies are insured, so fire losses are covered, and they aren't held responsible if houses burn down due to their greed."

Putz had harsh words for President Donald Trump's response to the crisis.

"If we do not address the climate change issue, no amount of forest management is going to avoid this sort of situation in the future — and note that the rate of change has increased, not decreased or stabilized," Putz explained.

Christensen also told Salon that Trump simply does not understand the science behind wildfires.

"To quote the president, 'You gotta clean your floors, you gotta clean your forests — there are many, many years of leaves and broken trees and they're like, like, so flammable, you touch them and it goes up.' This statement shows a complete and utter lack of understanding of what actually causes and drives wildfires!"

He added, "I have deleted all expletives from my first response to your question."