The docuseries attempts to offer insight, but eventually devolves and fails to truly interrogate Woods' issues 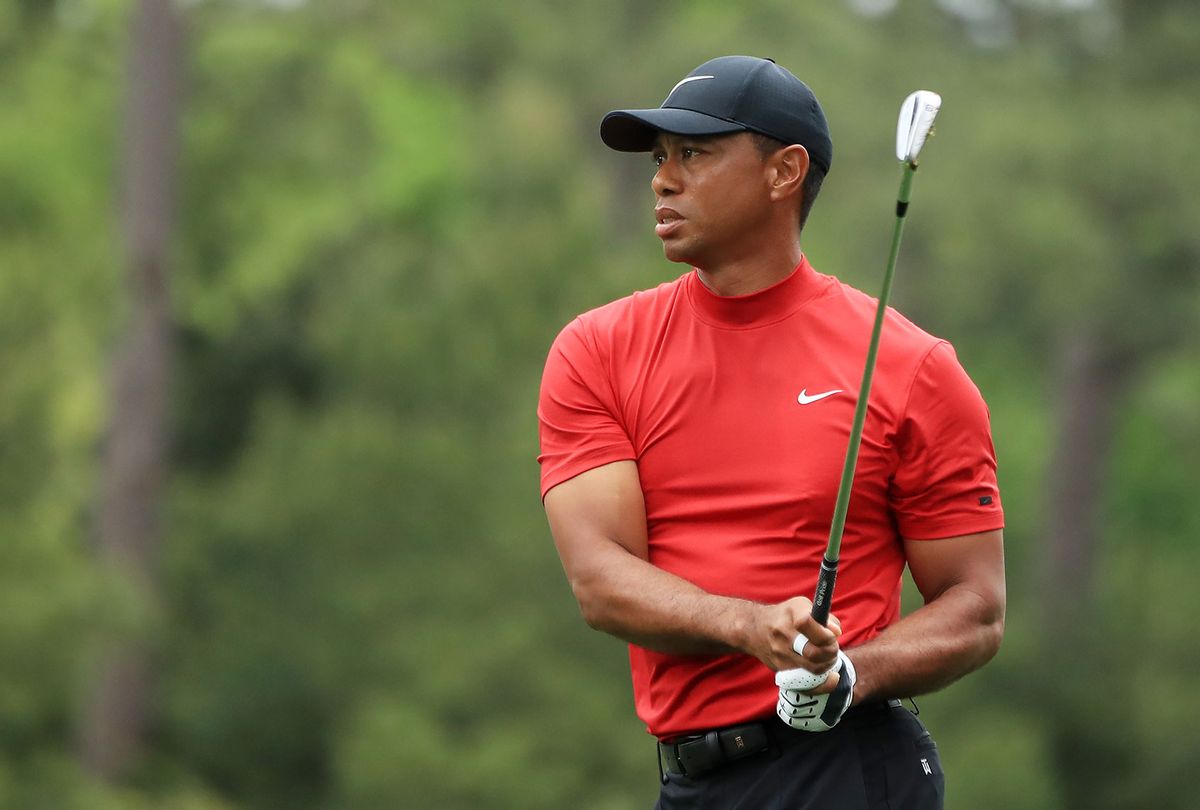 Tiger Woods during the final round of the Masters on April 14, 2019 (Andrew Redington/Getty Images)
--

"Tiger," HBO's new two-part documentary about Tiger Woods, attempts to explain the towering rise, epic downfall, and eventual comeback of one of the greatest athletes in the world. Based on the 2018 biography by Armen Keteyian and Jeff Benedict and with an eye toward separating the man from his carefully constructed public image, the documentary from directors Matthew Heineman and Matthew Hamachek uses never-before-seen footage and new interviews with one-time friends and acquaintances to paint a portrait of a man destined for greatness who became a cautionary tale about the pressure of expectations. Unfortunately, after a relatively strong start, the documentary ultimately unravels in time with its subject.

The first half, which clocks in at just under 90 minutes, is the stronger of the two episodes, buoyed by interviews with family friends Pete McDaniel and Joe Grohman, former caddy Steve Williams, and Woods' first serious girlfriend, Dina Parr, who graciously allowed producers to use her home videos in which Woods appears open and carefree in a way he rarely has since emerging as an elite athlete and global sports icon. The episode frames Woods' rise to the top through his close relationship with his father, Earl Woods, revealing the immense pressure Tiger was under to live up to impossible expectations from a very young age.

Opening with footage from the Haskins Collegiate Award Banquet in 1996, the year Tiger left Stanford University to turn pro, the episode introduces viewers to the elder Woods as he speaks about his son and everything he believes he will do for the world. "[Tiger] will transcend this game and bring to the world a humanitarianism which has never been known before," says the elder Woods, who is visibly emotional. "The world will be a better place to live in by virtue of his existence and his presence."

This borderline worship, odd even for a parent, plays over footage from different moments in Woods' life, both the highs and the lows, so it's apparent from the start that "Tiger" has no interest in being a hagiography in the vein of ESPN's "The Last Dance," which chronicled the career of Michael Jordan with a major emphasis on his final season with the Chicago Bulls.

The many scandals in Woods' closet are part of him, part of his past, and therefore part of his legacy, and the documentary embraces this version of him. But the narrative often slides too far into the salacious aspects of Woods' story rather than dig deep into the obstacles that Woods overcame first on his way to the top and then again in his comeback. In prioritizing the scandals "Tiger" only briefly flirts with the idea of being a compelling commentary on celebrity and expectations, on exploring racism in an elitist, traditionally white sport, and on the way America treats its sports heroes when they're on the way up versus when they're on their way down.

The issues that hold "Tiger" back begin around the time its subject's own problems start, right after his father's death in 2006. It's clear even without the significant time the doc dedicates to Woods' experience with the Navy SEALS, famously chronicled in Wright Thompson's ESPN story from 2016, that he was lost. But "Tiger" doesn't quite know how to tackle its subject's public downfall amid grief, loneliness, and addiction without his participation, so it turns to the only place it thinks it can: the women from his past who are willing to talk.

Much has been written already about "Tiger" featuring the first-ever sit-down interview with Rachel Uchitel, a nightclub manager and the most high profile of Woods' mistresses. Because of this, she has been the focus of many of the news pickups from the documentary. But Uchitel's involvement in the project feels like a mistake. Not only do the directors treat her and the rest of Woods' mistresses as being equally detrimental to his golf career as the series of serious injuries that plagued him beginning in the mid-to-late 2000s, but her presence threatens to overshadow the rest of the documentary and succeeds only in allowing her to become a much bigger piece of the story than she probably ought to be. This is not to shame Uchitel; the treatment she has received from the media and the American public in the last decade, which is featured in the doc, has been nothing short of disturbing and disgusting. She is not to blame for Woods' downfall, but without his participation in the documentary, the second episode becomes a one-sided story that unfortunately gives little insight into the person Woods was at the time of the affair or his corresponding battle with sex addiction.

And this is the crux of "Tiger"'s problem: While the first episode featured interviews with people who had known Woods during his rise and thus was able to provide some sort of "insider" information about the man in order to create a narrative spine, it seems that almost no one who participated in the documentary has had access to Woods in the decade since the fallout of his infamous car accident in 2009. This means there is no insight into the man who was arrested for DUI in 2017 and no insight into the man who completed the ultimate comeback to win the Masters two years later. And when it comes to Woods' return to the top, the doc doesn't even begin to tackle the story until there are 10 minutes left, which reveals an even greater hurdle in the quest to dissect Tiger Woods: how do you tell a story that isn't finished?

Woods is still competing, not nearly at the level he was when he was at the top of the sport, and likely not even at the level he was when he won the Masters in 2019. But nevertheless, Woods' story is still in progress, which means anything produced before his retirement is going to feel incomplete in some way. So while comparisons between "Tiger" and "The Last Dance" abound, as both projects focus on two of the biggest names in sports, the latter has multiple advantages over the former.

"The Last Dance" chronicles the career of a man long since retired from his sport, and it was produced by and featured interviews with its subject, which allowed him to shape the narrative into what he wanted it to be. While this presents its own set of problems, Jordan's involvement also provided much-needed context. For someone like Woods, who has spent his entire life carefully constructing a public persona in order to protect himself from the maw of celebrity and fame, the refusal to participate in the making of "Tiger" is not remotely surprising. But one has to wonder if the documentary would have been less messy, less reliant on salacious stories of infidelity, if he had agreed to appear.

As it stands, "Tiger" introduces a number of significant topics that are worth exploring, not the least of which being the racism Woods, whose background is white, Black, Native American, and Asian but is often treated and referred to in the media as Black, has faced throughout his career but especially after his affairs were made public. However, it fails to investigate them beyond face value. As HBO's Bryant Gumbel notes in the second episode, "All those people who really didn't like [Woods] and were trying to find reasons to bring him down, reasons to say he wasn't this and wasn't that, now they're going to have their moment."

And they did. Woods' life became entertainment. It was tabloid fodder. It was, as "Tiger" shows, referenced across all forms of media, often with an undercurrent of racism, which came to a head in 2010 when Woods was set to play in the Masters. Billy Payne, chairman of Augusta National, publicly reprimanded Woods ahead of the tournament. It was, as former LA Times writer Thomas Bonk notes, "not the place of the tournament to chastise a former champion, especially a champion of color."

The way celebrities are treated when they're at different stages in their career is a running theme throughout "Tiger," but in 2021 the mistreatment of a person of color cannot and should not be a quick aside in a larger story. In the very least, this topic deserves its own episode in order to fully explore how Woods was treated throughout his life, but especially during this particular period, because as New York Times writer Karen Crouse points out following some wins in 2013, hypocrisy was everywhere as fans were quick to forget how they had humiliated Woods once he was winning again. "On a really elemental level, people weren't even looking at Tiger as a person," she said. "They were looking at him as a performer."

While "Tiger" has aspirations of being something deeper, it ultimately suffers the same fate. Rather than being a thorough look at one of the world's most fascinating athletes, "Tiger" eventually fails to treat his story as anything other than entertainment. As such, it seems we'll likely never know the real Tiger Woods, at least not until he's ready to tell his own story. And in that case, we may be waiting a long, long time.

"Tiger" is available to stream on HBO Max.