As McConnell kicks off his plan to filibuster Biden's presidency, his tool for obstruction needs to be taken away 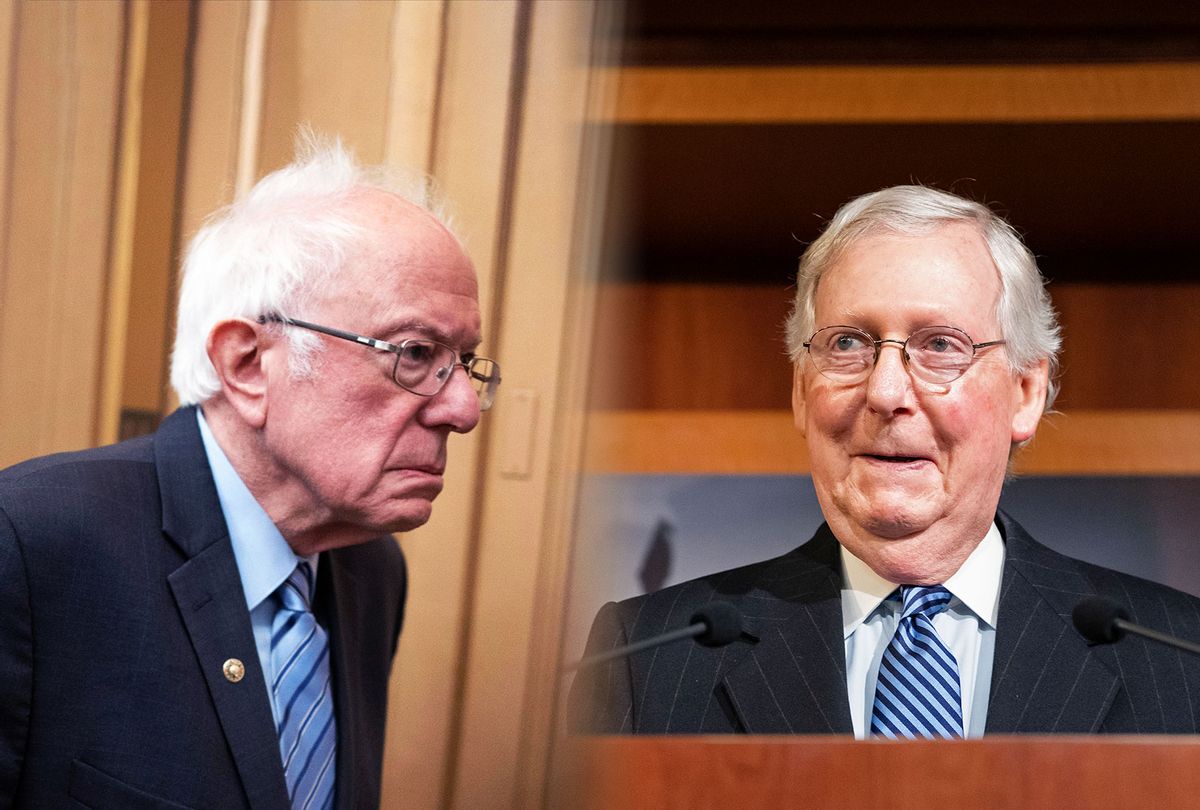 Shortly after President Joe Biden's inauguration on Wednesday, a friend told me he was worried. Senate Minority Leader Mitch McConnell, R-Ky., was smiling way too much during the ceremony, he said, and it made him nervous. The sight of a smiling McConnell, after all, is like seeing a smiling Ted Bundy: It should immediately make you wonder where the bodies are buried.

Sure enough, McConnell wasted no time launching his evil scheme to maintain control of the Senate after losing his Republican majority.

On Thursday, McConnell kicked off the newly Democratically-controlled Senate's first filibuster, not of legislation nor appointments, but of even starting the business of the Senate by assigning committee spots. He demanded that Democrats take the elimination of the filibuster off the table completely before commencing with the basic business of the upper chamber. He justified the move by pompously declaring, "Minority rights on legislation are key to the Senate" and disingenuously appealing to tradition.

This is complete and total nonsense offered with the utmost bad faith, as Sen. Elizabeth Warren, D.-Mass., pointed out. "Mitch McConnell was fine with getting rid of the filibuster to a United States Supreme Court nominee for a lifetime appointment, but he's not okay getting rid of the filibuster for unemployment relief for families that are out of work because of COVID-19," Warren told CNN. "I've just had enough of Mitch McConnell."

Sen. Brian Schatz, D-Hawaii, agreed, reminding the Republican leader: "We won the Senate. We get the gavels."

McConnell is threatening to filibuster the Organizing Resolution which allows Democrats to assume the committee Chair positions. It's an absolutely unprecedented, wacky, counterproductive request. We won the Senate. We get the gavels.

That McConnell is filibustering before Senate business even begins should serve as the surest sign that his strategy going in is to obstruct everything the thin Democratic majority wants to do, tank the ability of the government to serve the people, and force Biden's presidency into failure. This is what McConnell did to Barack Obama, working under the almost certainly correct theory that people blame government failures not on the Republicans who caused them, but the Democrat in the White House. And that's clearly what McConnell intends to do this time around.

"Right now, the chamber that calls itself the world's greatest deliberative body can't even debate how to arrange itself," the editorial board at the Los Angeles Times wrote Friday morning, arguing that McConnell's maneuver is proof enough that it's time to get rid of the filibuster entirely.

It does seem that many to most Democrats in the Senate agree, but the hold-up, according to Politico, is coming from Sens. Kyrsten Sinema of Arizona and Joe Manchin of West Virginia, who "say they want to keep the filibuster, emphasizing that it drives compromise."

McConnell's very obvious plan is to keep anything from getting done, forcing the economy to collapse on itself and the pandemic to continue to spiral out of control. Republicans can then falsely blame Democratic leadership for the destruction — knowing most voters pay very little attention and won't know the truth — to reap the rewards at the ballot box. If the filibuster is not destroyed swiftly, it will be used relentlessly by Republicans to obstruct absolutely everything. To believe anything else is to be a total fool.

McConnell's immediate goal is forcing Biden's presidency to fail, but really, it goes much deeper than that. Ever since Ronald Reagan's administration, Republicans have campaigned on the idea that government is inherently dysfunctional. The idea is to demoralize voters and drive down turnout so that the only people who show up to vote are right-wing culture warriors. And the best possible way to do that is to make absolutely sure that government never works, by tanking any efforts by Democrats to pass bills that actually help people.

That's why it's foolish to believe there's any argument that could be made to lure Republicans over to vote for Democratic bills. Republicans don't want to vote for Biden's proposed coronavirus relief bill, even though it would do a lot of good for their constituents, because they believe — rightfully — that seeing the government work effectively for the common good would do long-term political damage to the Republican Party. They'd rather just keep screwing over their own constituents, and pretending the problem is government itself, and not Republican obstructionism.

The good news is an increasing number of Democrats who understand that Republicans only feign interest in compromise in order to run out the clock, making sure that absolutely no legislation of consequence gets passed. Sen. Chris Murphy, D.-Conn., told Edward Isaac-Dovere of The Atlantic that there's "a consensus that one of the mistakes of '09 was playing footsie for a long time with Republicans who never had any intent to actually get to yes."

Unfortunately, this message doesn't seem to be cracking the thick skulls of the centrist Democrat holdouts like Manchin. What makes this doubly stupid is that, by getting rid of the filibuster, the power of said centrists increases dramatically. Without a filibuster, Manchin can extract all sorts of concessions to get legislation passed, because he's the swing vote. With the filibuster, Republicans hold all the cards — all of them. McConnell would be the real Senate leader, and Senate Majority Leader Chuck Schumer, D.-N.Y., will be leader in name only.

The filibuster is not a sexy debate; parliamentary procedure never is! But it is the most important and pressing issue facing the country right now, because as long as it still exists, there's simply no hope of passing any real legislation on any pressing issue, from the pandemic to climate change.

There is no time to waste. As Ezra Klein of the New York Times writes, Democrats only have "[t]wo years to prove that the American political system can work," and if they fail, "they will open the door for Trumpism or something like it to return, and there is every reason to believe it will be far worse next time."

Again, a lot of congressional Democrats — most, hopefully — seem to get this. But with only 50 Democrats in the Senate, they all need to get on board, and fast. This is about getting relief to people and passing bills that are way overdue. But it's also, as Klein argues, about saving democracy itself. If the people don't see their government working for them, they will drift away and let the Trumpers take over. The only way to stop that is to nuke the filibuster so thoroughly that only a smoking pit remains.