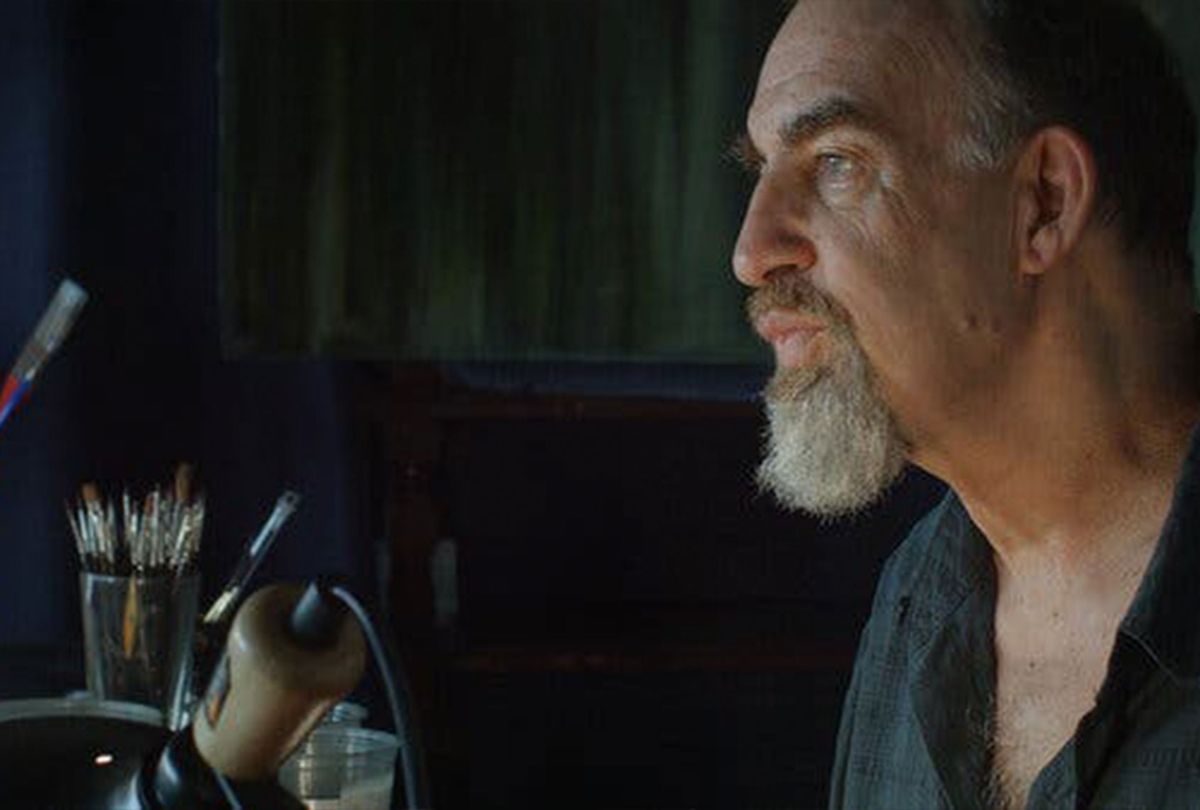 In his new HBO program "Painting with John," John Lurie wants you to know that he knows the comparisons to Bob Ross are inevitable, but he's there to quickly subvert them. "None of the trees in my paintings are happy," he tells viewers as he dabs his paintbrush on to a watercolor palette. "They're all miserable."

Lurie, the founder of the art-jazz band the Lounge Lizards and late-'80s and '90s indie film star, was diagnosed with Advanced Lyme disease in 2004 and ended up resettling in the Caribbean (he refuses to specify which island) after three decades in New York. There, he began painting. Not the kind of painting people often say they're going to do when they're edging up on retirement — still lifes of waxy fruit or pastoral landscapes — but earnest, dreamy work that New York Times critic Roberta Smith said existed "in the gap between William Wegman's drolly captioned early drawings and Jean Michel-Basquiat's acerbic diagrammatic images."

This six-episode unscripted show was advertised by HBO as "part meditative tutorial, part fireside chat," wherein viewers would find "the artist ensconced at his worktable, where he hones his intricate watercolor techniques and shares his reflections on what he's learned about life."

The first episode is titled, "Bob Ross Was Wrong," and as such, I was curious about its proximity in tone and form to "The Joy of Painting," the beloved instructional art program hosted by Ross — who posthumously became something of a patron saint of puffy clouds and happy little accidents.

But it's quickly evident that this is no public television affair — though there is some playful straining against the genre's conventions. Lurie spends a fair amount of the show's introduction debating whether he should offer a "polite smile" in subsequent episodes' introductions. "No," he determines; his polite smile scares people.

And other than the occasional invocation of Ross' name ("Bob Ross was wrong; everybody can't paint," Lurie murmurs in the first episode) Lurie doesn't spend too much time contemplating the artist. "Painting with John" is neither a nihilistic takedown of Ross, nor is it actually instructional — at least not if viewers are wanting a step-by-step guide to creating their own version of "The sky is falling. I am learning to live with it" or "Ghost on stilts."

Instead, it's a dreamy, meandering — sometimes poignant, occasionally dark — contemplation on artistry, celebrity and isolation that vacillates between self-indulgence and self-awareness, all against the backdrop of striking footage of Lurie actually painting. It's a window into his mind and creative process, padded with a layer or two of metaphor.

Take the opening of the second episode, for instance. A camera drone, piloted by Lurie, flies high over a lush tangle of jungle-y foliage. It smashes into a tree. Cut to another drone crashing into a house. Another smacks into a patch of grass, then another ends up catching in some vines. In endeavoring to get the ideal shot, Lurie said, he ended up totalling seven drones.

The audience is left to fill in their own symbolism — perhaps a modern-day Icarus story that centers on the precarious nature of taking risks in one's craft — much in the way Lurie asks, at one point, for viewers to survey a beautiful shot of a sunset and provide their own poem or words of wisdom.

He meant to prepare one, but didn't have the time.

Underlying much of "Painting with John" is a sort of cheeky (mostly) unspoken question from Lurie: "Why are you watching this?" The series is packed with anecdotes that are fun in a sort of "You had to be there," kind of way, like when Lurie details seeing Gore Vidal on a flight to Paris and how he helped him with his bags. Interesting trivia? Sure, especially if you're a particular fan of Lurie.

But in concert with footage of him tossing tires down a hill for fun, or members of his domestic staff giggling as they attempt to put a magnetized toy fish back together after it tumbled off the refrigerator, I was occasionally left wondering whether this was thematically building to something greater than the sum of its parts.

Perhaps this is because the memory of "How To with John Wilson," another experimental unscripted HBO series, is still relatively fresh. In it, documentary filmmaker John Wilson meticulously records the events of everyday life, much in the same way other people keep a diary. He uses those clips to investigate one new topic over the course of each episode. These include things like scaffolding, small talk, splitting the check and covering furniture.

While on the surface, the topics seemed bland or scattered, Wilson ended up creating a shockingly vulnerable meditation on the inherent loneliness of urban living through the inventive use of seemingly mundane footage. In its wake, "Painting with John" registers as a little unwieldy, something that Lurie seems aware of.  "Why am I doing this show?" he asks at one point. "If you're watching, just turn it off."

This differentiates the show from Lurie's 1991 series "Fishing With John," which is now available through the Criterion Collection. That show was a deadpan parody of outdoor programs wherein Lurie, who was not a particularly adept fisher, would take to the open waters with celebrity friends like Willem Dafoe, Tom Waits and  Jim Jarmusch.

Together they would quip back and forth while waiting for bites. Nothing really happens, but the show's narrator (Robb Webb) would occasionally interject with dramatic details (like Dennis Hopper had "seen a map on the wall of the monks' monastery that leads him to believe that somewhere in this area is the lair of the giant squid") despite no footage to support them.

It was absurdist, yes, but clearly polished for a 30-minute segment on IFC. One of the reasons that "Painting with John" likely hits differently is that Lurie initially envisioned the episodes as shorter-form social media content.

"I thought, people are so depressed, let's make a bunch of these one-minute-long things and put them on Instagram, just to cheer people up," he told the New York Times. He said that he never expected it to go to network television: "So if people hate the show and go, 'This is boring,' blame HBO! I didn't tell them to play it."

Where "Painting with John" really thrives though — in a way that a one-minute Instagram video never could have — is in Lurie's grappling with his experiences with and proximity to fame. In the series' fourth episode, Lurie details how he and the late chef and television personality Anthony Bourdain planned on getting lunch together, but wanted to go somewhere where neither would be recognized. Bourdain confided in Lurie that since achieving international fame, he'd developed agoraphobia.

But inevitably, Bourdain was recognized and, as Lurie puts it, some people can be "parasitic" in the presence of celebrity. It's a reflection that is especially poignant in light of Bourdain's death by suicide in 2018. "I'm confused about losing him and I think about it all the time," Lurie said.

Lurie seems uncertain with how comfortable he is with his own fame throughout "Painting with John." At one point, he opines that people who are good at doing television "are probably sociopaths" and that the better he has gotten at it, "the worse and worse" he has become as a person.

Fame has its upsides — how many people can casually drop in conversation, like Lurie does in the first episode, that they did cocaine in a broom closet with Rick James? — but it can also cause some to feel isolated or seek isolation, much like Lurie has for the decade.

Painting has since become the lens through which he views and interrogates the outside world. It's a solitary activity, through which you can actually make something beautiful and new from digressions and memories. As such, as the season goes on, Lurie's views on who should pick up a paintbrush seem to soften a bit. "Just put the paint on the paper and see what you have," he said.

It's sometimes okay to just make art for the sake of expressing oneself and seeing who responds. "Painting with John" is evidence of that.