After Salon inquired about dubious gift, Boebert said she "may purchase it from the current owner in the future" 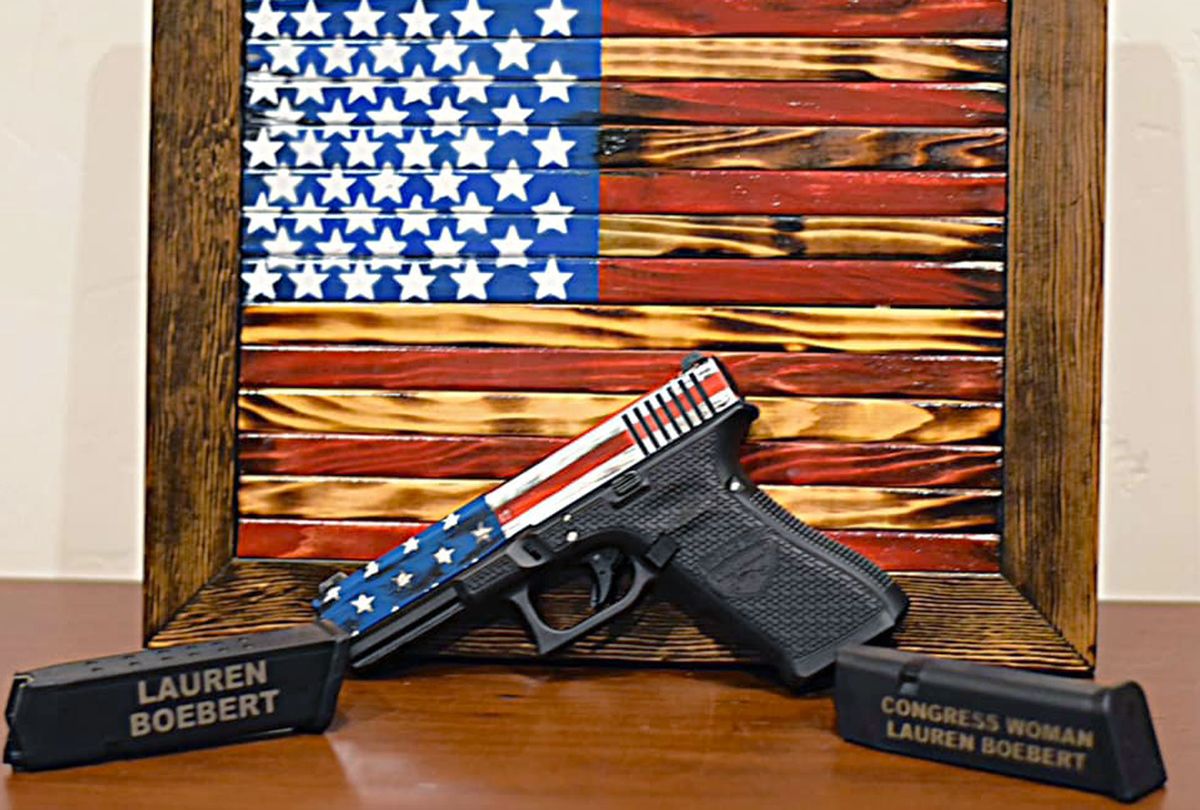 Rep. Lauren Boebert, R-Colo., received this weekend a custom-printed Glock 22 handgun with the congressional seal on the grip as an apparent gift from members of a group called "Boots on the Ground Bikers for Trump." Boebert now says she does not currently have possession of the gun, perhaps because it's a violation of House ethics rules for members to accept gifts worth more than $50. Furthermore, unauthorized use of the official seal of the U.S. Congress seal is a federal crime.

Video posted to Facebook on Sunday shows group member Duke Everest presenting the gun to the freshman conservative at a private event in a Colorado living room with about two dozen people in attendance. He explains that Boebert, who has made a show of flouting gun regulations in Washington, D.C., and within the U.S. Capitol, earned the gift by doing "exactly what we asked you to do."

Everest's Facebook post included the video and a series of photos. "It's been a little works in the making but we finally got to give Lauren her gun tonight. Colorado Chapter — Boots on the Ground — Bikers for Trump put together a Glock 22 for our Freedom Fighter," he wrote, tagging Boebert's Facebook account. "Love you all!"

In the video, Everest begins by telling the crowd, which had gathered in violation of Colorado coronavirus restrictions,  "Unfortunately we weren't able to give our congresswoman the big surprise we wanted to," without explaining what that "big surprise" would have been. "But I did just want to say, thank you, Lauren. In just the couple weeks you've been there, you've been raisin' hell. You've been doing just exactly what we asked you to do, defending our U.S. constitutional rights." Everest holds up what appears to be a small booklet, saying, "This is what it's all about right here. ... It's the Bill of Rights, not the Bill of Suggestions."

Everest continues, "On behalf of the Colorado chapter of Boots on the Ground Bikers for Trump we got a little present for you." He produces a wooden box with the U.S. flag painted on it, and opens it to reveal the pistol, which he describes as a .40-caliber Glock 22, to loud cheers in the room. 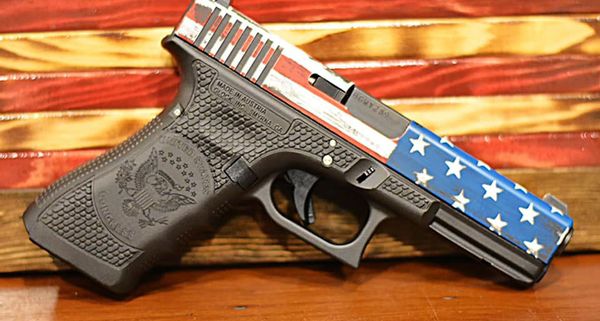 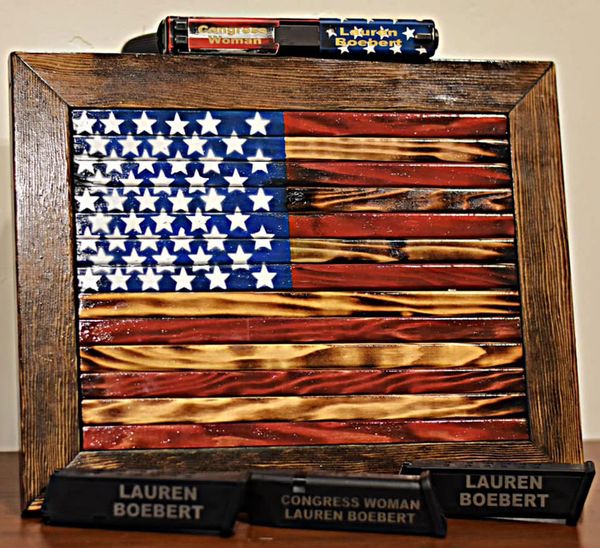 After Everest makes sure the firearm is unloaded, he hands it to the visibly delighted Boebert, and points out the customized grip, with the official congressional seal on one side and the Bikers for Trump logo on the other. The congresswoman poses with it, beaming, and says, "This is incredible. Thank you so much!"

Everest then gives Boebert a custom-printed magazine, and then from a separate drawer retrieves a box of bullets. "These are freedom seeds," Everest says, drawing laughs. 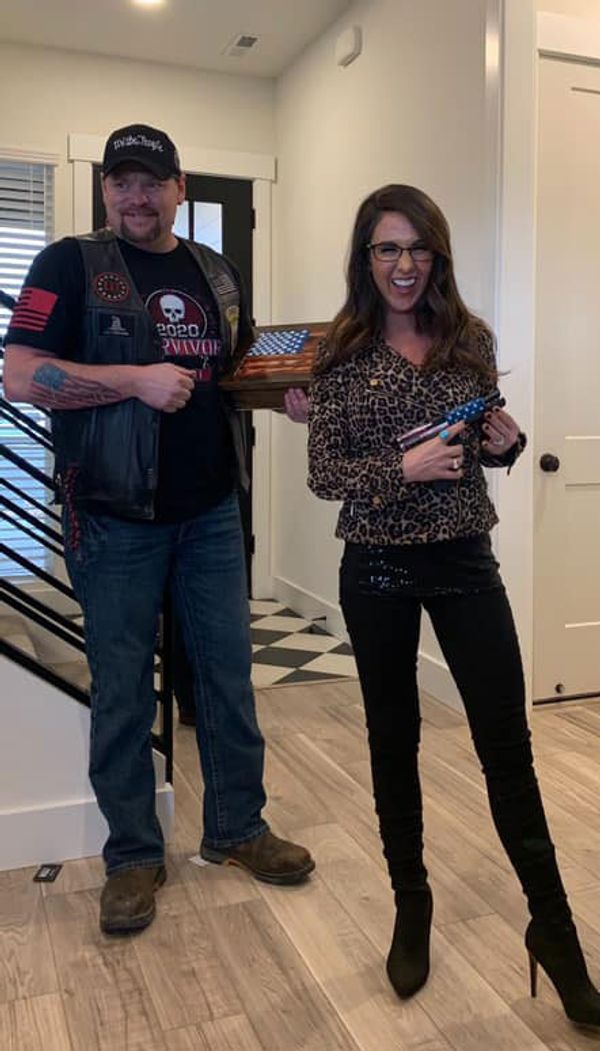 House ethics rules bar members and staff from accepting gifts valued at more than $50, and federal statutes make it a crime to use the congressional seal without authorization. Standard Glocks run between $500 and $600, and magazines can typically range from between $20 and $50.

Asked Monday morning about the gift, Boebert told Salon in a text message, "Who said I accepted it? You saw a presentation." She would not say whether she refused, returned or did not accept the gift, replying: "I didn't leave with it. You're grasping at air here."

Government ethics attorney Brett Kappel told Salon that while House ethics rules bar members and staff from accepting gifts valued at more than $50, certain exemptions apply — such as for commemorative items, like trophies or plaques inscribed with the member's name.

"That's the exception they may be trying to use here," Kappel said. "Unfortunately, the House ethics rules say that this exception does not apply to items that have 'significant utilitarian value' — such as a working firearm — even if it is inscribed with the member's name and presented to her in a special box for display."

Kappel said that Congress has already addressed this question, specifically with firearms. "Both the House and Senate Ethics Committees have dealt with this issue before, when the NRA tried to give guns to members by placing them on display racks and calling them commemorative items," he said. "The Ethics Committees said no dice, unless the rifle was permanently affixed to a plaque and could not be removed for use."

Kappel continued, "She can, however, keep that Glock if she pays Bikers for Trump its fair market value."

In a later text, Boebert cited this loophole: "I do not have possession of the firearm. I may purchase it from the current owner in the future. That has not yet been determined." Asked who that current owner was, Boebert replied, "I'm not telling you or anyone."

An hour after her conversation with Salon, Boebert posted a photo from the event on her official Facebook page, captioned: "I had a great time with Colorado Boots on the Ground Bikers for Trump. Very grateful for their support and for their gesture with this custom Glock 22. I like it so much, I plan on buying it so I can keep it. What a great group of patriots!"

Kappel pointed out that a political group could also give the gun to Boebert's campaign committee as an in-kind contribution, and the committee could auction it off at a fundraising event.

Video of the event was shared on Facebook by Steven Moore, an alleged member of the anti-government Three Percenters militia group who in December 2019 posed in a now-infamous photo with Boebert and other militia members on the steps of the Colorado State Capitol, with a number of them flashing what is commonly understood to be a "white power" sign. Moore appears to have removed the video from his Facebook page not long after Salon inquired with Boebert about his connection to the event.

A few minutes after midnight on the morning of Jan. 6, Moore changed his Facebook cover photo to a picture of a forearm, presumably his, with a fresh tattoo of "1776" and the American flag. Later that morning, Boebert tweeted "1776." The year of American independence is also part of QAnon lore, as code for the day that the people and a secret government coalition, supposedly led by Donald Trump, will rise up in a bloody revolution against Democratic leaders. It was a common refrain among the insurrectionists who tried to take the Capitol later that afternoon, some of whom may have planned to kidnap and execute members of Congress.

"Every day we learn more and more about just how deep Lauren Boebert's ties to White Supremacists go," Rural Colorado United co-chair George Autobee told Salon in an emailed statement. "If she's willing to break laws on camera for them today, what is going on behind the scenes?"

Boebert has faced fierce criticism for her professed admiration of the QAnon conspiracy theory, which helped fuel the attack on the Capitol. Since arriving in Washington, the gun-rights absolutist, who in 2019 drove three hours one-way to tell then-presidential candidate Beto O'Rourke at a campaign event that he would not take her guns away, has sought attention by challenging local and federal firearms laws. Last week she refused to cooperate with Capitol Police after setting off a metal detector in the building. She faces a $5,000 fine.