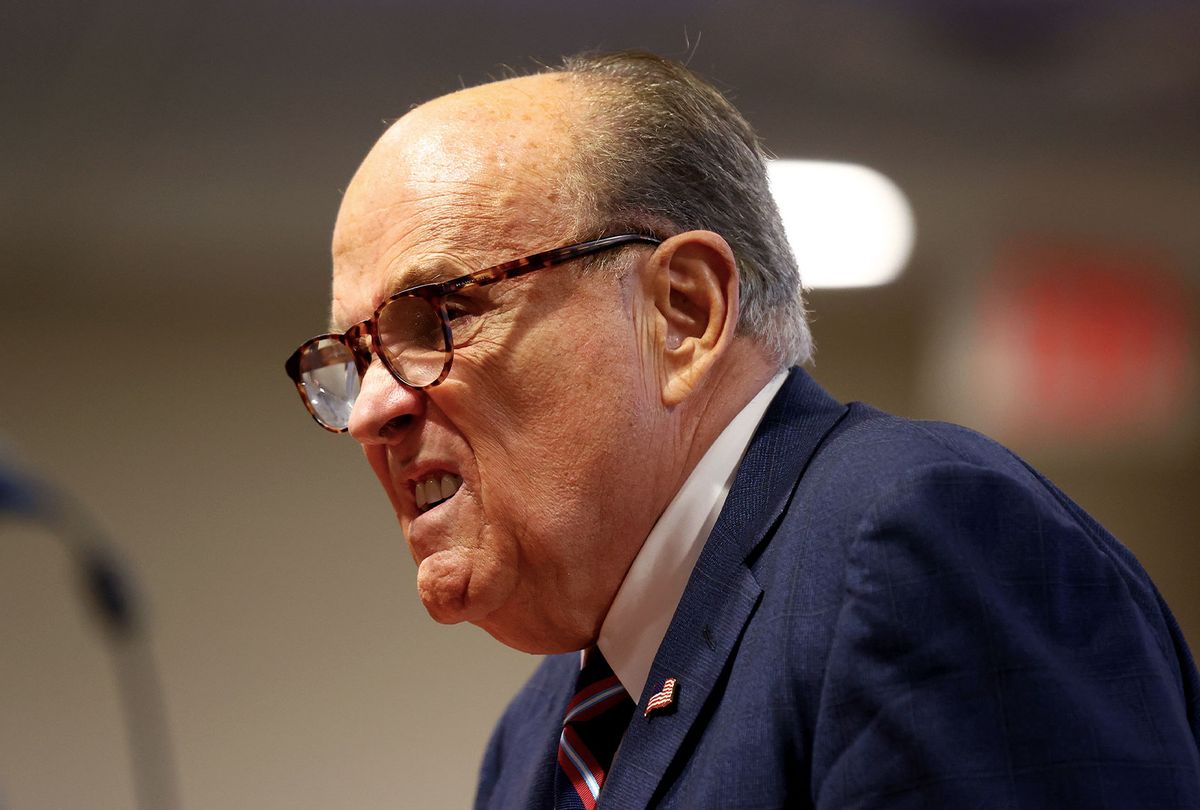 Dominion Voting Systems sued Trump attorney Rudy Giuliani on Monday, accusing the former New York City mayor of pushing a "big lie" about the company to gin up a baseless narrative of election-rigging.

The voting machine manufacturer filed a defamation lawsuit in a federal court in Washington, D.C., seeking $1.3 billion in damages after Giuliani waged a "viral disinformation campaign" based on "demonstrably false" claims, according to the complaint. The company says the false claims have jeopardized its contracts with states around the country and that it expects to lose hundreds of millions over the next five years.

"Just as Giuliani and his allies intended, the Big Lie went viral on social media as people tweeted, retweeted, and raged that Dominion had stolen their votes. While some lies — little lies — flare up on social media and die with the next news cycle, the Big Lie was different," the lawsuit said. "The harm to Dominion's business and reputation is unprecedented and irreparable because of how fervently millions of people believe it."

The company, which has also sued pro-Trump lawyer Sidney Powell for the same amount for similar statements, listed dozens of instances in which Giuliani baselessly alleged that Dominion was linked to former Venezuelan president Hugo Chávez, who died in 2013, had sent votes overseas to be counted and had flipped votes from former President Donald Trump to President Joe Biden. Dominion, the second-largest voting machine company in the country — whose equipment is used in more than half of the 50 states, including many won by Trump — was founded in Canada and has its U.S. headquarters in Denver.

"Dominion was not founded in Venezuela to fix elections for Hugo Chávez," the lawsuit says. "It was founded in 2002 in John Poulos's basement in Toronto to help blind people vote on paper ballots."

The company may file additional lawsuits, according to The New York Times, noting in its complaint that MyPillow founder Mike Lindell, Fox Business host Lou Dobbs and conservative cable news outlets like Fox News and Newsmax also pushed the claims. Thomas Clare, a lawyer for Dominion, told the outlet that the company has not ruled out suing Trump personally as well.

The lawsuit cites numerous false claims that Giuliani made in state legislative hearings, on social media, on conservative news outlets and on his podcast, but notes that he avoided mentioning Dominion in any of the court documents he filed on behalf of Trump's baseless and failed attempt to overturn the results of the election.

"Notably, not a single one of the three complaints signed and filed by Giuliani and other attorneys for the Trump Campaign in the Pennsylvania action contained any allegations about Dominion," the complaint said.

The lawsuit added that Giuliani mentioned Dominion during his speech at the Jan. 6 Trump rally that preceded the deadly Capitol riot.

"Having been deceived by Giuliani and his allies into thinking that they were not criminals — but patriots 'Defend[ing] the Republic' from Dominion and its co-conspirators — [the rioters] then bragged about their involvement in the crime on social media," the lawsuit said.

Clare told the Times that the riot showed the extent to which Trump's followers accepted the baseless claims about the company despite a lack of any evidence.

"From a defamation law perspective, it just demonstrates the depth to which these statements sink in to people," he said. "That people don't just read them and tune them out. It goes to the core of their belief system, which puts them in a position to take action in the real world."

A Dominion executive previously sued Giuliani, Powell, and numerous conservative media outlets and pundits after he said baseless claims linking him to the unfounded conspiracy theory led to death threats and forced him into hiding.

"Giuliani's statements were calculated to — and did in fact — provoke outrage and cause Dominion enormous harm," the suit said.

Poulos, the company's founder and CEO, added that Giuliani's false claims not only "damaged the good name of my company, but they also undermined trust in American democratic institutions."

"The thousands of hand recounts and audits that proved machines counted accurately continue to be overshadowed by disinformation," he said.

The company sent warnings to Giuliani and others in December to stop making false statements about the company but he continued to push the narrative. He called for "phony Dominion voting machines" to be investigated after receiving the warning and last week said on his radio show that he had "boxes of evidence" to back his claim that Dominion is a "clear and present danger."

"Giuliani has not retracted his false claims about Dominion, and many of his false and defamatory television and radio appearances and tweets remain available online to a global internet audience," the lawsuit says. "Indeed, to this day, he continues to double down on the Big Lie."

Dominion's lawsuit also argues that Giuliani used the false claims to enrich himself, noting that he "reportedly demanded $20,000 per day" to represent Trump and "cashed in by hosting a podcast where he exploited election falsehoods to market gold coins, supplements, cigars and protection from 'cyberthieves.'"

The lawsuit is the latest bit of fallout from Giuliani's leading role in the legal campaign to overturn the election that fueled the deadly Capitol riot. He and Powell also face potential legal action from the voting tech firm Smartmatic. Giuliani falsely claimed that Dominion was actually a "front" for Smartmatic even though the companies have no ties to each other, and claimed the latter firm had actually been founded by Chávez and was "designed to fix elections," while offering no evidence. A legal threat from Smartmatic prompted Fox News, Newsmax and others to retract their claims about the company and issue corrections.

New York State Senate Judiciary Committee chairman Brad Hoylman has also asked the state's court system to strip Giuliani of his law license, citing potential ethical violations in the legal challenges and his role in a "violent insurrectionist attack on the United States Capitol." The New York State Bar Association also announced it had launched an investigation into Giuliani that could lead to his expulsion from the group, though it does not have the power to strip his law license.

The riot also led the House to impeach Trump for a second time for inciting the insurrection. Trump himself pushed the Dominion conspiracy theory in a video posted in December.

"On top of everything else, we have a company that's very suspect. Its name is Dominion," he said at the time. "With the turn of a dial or the change of a chip, you could press a button for Trump and the vote goes to Biden. What kind of a system is this?"

Clare told the Times that the company may still sue Trump and others who pushed the narrative against the company.

"We're not ruling anybody out," he said. "Obviously, this lawsuit against the president's lawyer moves one step closer to the former president and understanding what his role was and wasn't."