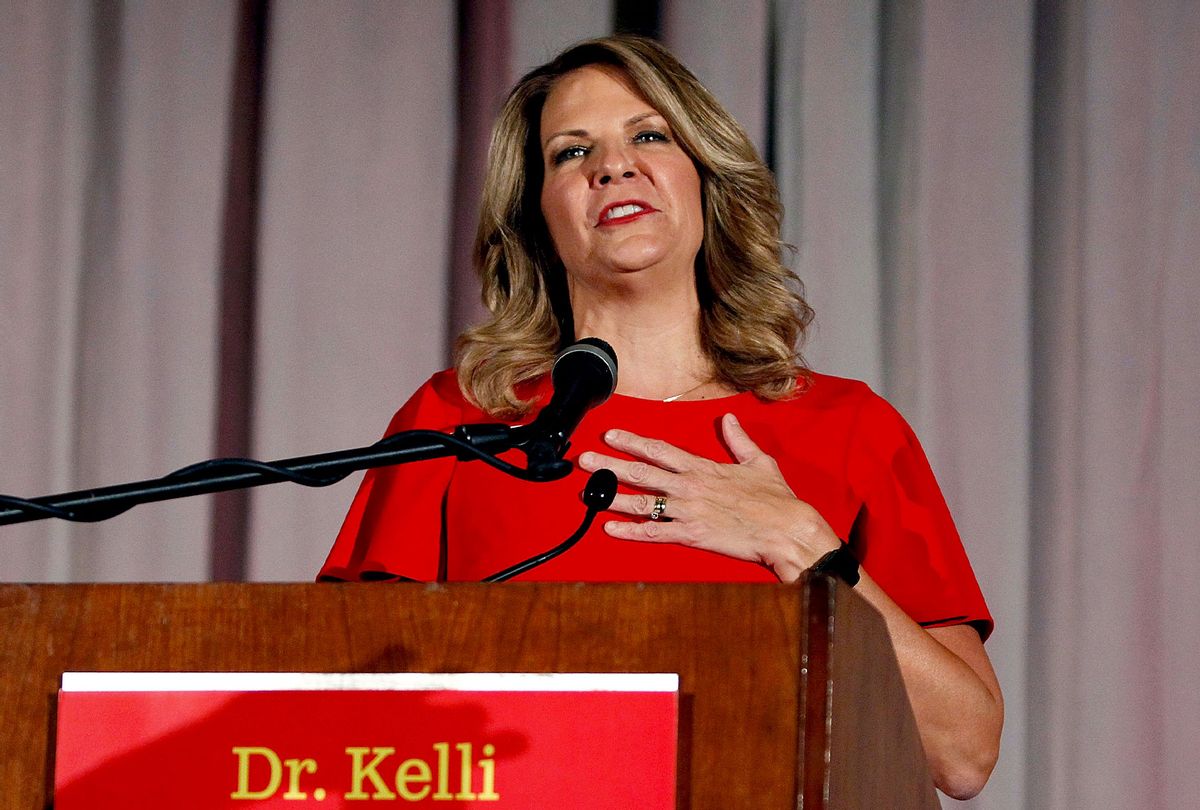 Despite former President Donald Trump's departure from the White House and disappearance from social media, state Republican parties are still promoting pro-Trump conspiracy theories and moving further right than ever. Some Republican lawmakers have seized on the unfounded voter fraud narrative to try to impose new voter restrictions out of concern that widespread voting could hamper their electoral chances.

The Arizona Republican Party on Saturday voted to censure Gov. Doug Ducey, a longtime Republican Trump ally who fell out of favor when he refused to question his own state's election results and certified President Joe Biden's win in the state. The measure, which focused on Ducey's delayed coronavirus restrictions, did not mention his decision to certify the results, though it came up often among the state's Republicans. The Arizona GOP also censured Cindy McCain, widow of the late Sen. John McCain, R-Ariz., and former Sen. Jeff Flake, R-Ariz., who opposed Trump. The party also re-elected chairwoman Kelli Ward, who backed Trump's baseless legal crusade and filed a "meritless" lawsuit to overturn the results of her state's election.

The Hawaii GOP on Saturday defended the baseless QAnon conspiracy theory, which appears to have motivated many members of the pro-Trump mob at the deadly Capitol riot who donned QAnon gear, on its Twitter account.

"We should make it abundantly clear — the people who subscribed to the Q fiction, were largely motivated by a sincere and deep love for America. Patriotism and love of County (sic) should never be ridiculed," one tweet said. Another added that people "who followed Q doesn't deserve mockery," referring to the anonymous 4chan poster who claimed to be a government insider dropping unfounded clues about a secret, cannibalistic Democratic cabal of child-traffickers and the mass arrests Trump was ostensibly planning.

Those tweets were posted by Hawaii Republican vice chairman Edwin Boyette, who has since resigned and had his tweets removed. After stepping down, Boyette blamed "leftist activists and the Democratic establishment attempting to smash any critical speech they can not control."

The Oregon Republican Party last week approved a resolution "condemning the betrayal" of the 10 House Republicans who voted to impeach Trump for his role in stoking the Capitol riot. The members who supported Trump's impeachment are "traitors" who "conspired" with "Leftist forces seeking to establish a dictatorship void of all cherished freedoms and liberties," the resolution said.

The Oregon GOP further claimed there was "growing evidence" that the Capitol attack was a "'false flag' operation" designed to "discredit President Trump, his supporters and all conservative Republicans," even though countless photos, videos, and charging documents show the mob was filled with Trump supporters egged on by the former president's own comments at the rally preceding the siege.

Oregon Republican chair Bill Currier said in a Facebook video last week that the state party is "encouraging and working with the others through a patriot network of RNC members, the national level elected officials from each state" to issue similar resolutions.

Indeed, Washington state's county Republican Party leaders have joined the push, calling for Rep. Dan Newhouse, R-Wash., one of the Republicans who voted to impeach Trump, to resign over his "indefensible" vote, according to the Associated Press. Republican leaders in Pennsylvania have also refused to seat a Democrat state legislator whose win has been certified by state officials.

The Wyoming Republican Party also issued a statement slamming Rep. Liz Cheney, R-Wyo., for aligning with "leftists" to impeach Trump. The House Freedom Caucus is pushing to oust Cheney as the No. 3 Republican in House GOP leadership in response to the vote.

But Republicans are not just eating their own for insufficient fealty to the former president. Many Republican state lawmakers are moving to impose draconian new voting restrictions to combat the alleged widespread fraud that Trump's own Justice Department, Department of Homeland Security and countless Republican judges have clearly said did not happen.

In Georgia, where top Republican state officials repeatedly pushed back on Trump's false claims about the election he lost, GOP lawmakers are pushing to impose a "bevy of changes," including limiting who can vote by mail and the use of drop-boxes, according to Politico. The state Senate's Republicans and Secretary of State Brad Raffensperger, who drew praise for standing up to Trump's lies and pressure campaign, have called to end no-excuse absentee voting in the state. Others have called for voter ID requirements for absentee ballots.

Some Georgia Republicans have cited concerns over election integrity to justify their push to limit voting access, even though Georgia already has some of the most restrictive policies in place and has confirmed the "integrity" of the November vote with multiple recounts and audits.

Some Republicans have made statements similar to Trump's pre-election admission that expanding mail-in voting would hurt Republicans' election chances, even though down-ballot Republicans generally performed far better than Trump in November, and the incumbent president himself outperformed his poll numbers in several states, including Texas and Florida.

"They don't have to change all of them [voting regulations], but they've got to change the major parts of them so that we at least have a shot at winning," Alice O'Lenick, a Republican on the Gwinnett County, Georgia, board of elections said in a newspaper interview last week.

The chairman of the Texas Republican Party called for the legislature to make "election integrity" a top priority this session, calling to shrink the state's early-voting period. VoteRiders, a nonprofit group that helps voters obtain IDs to vote, predicted that at least five other states would move to impose new voter ID requirements, according to Politico. Republican lawmakers in Michigan, Pennsylvania and Wisconsin have also signaled that they want to impose new voter restrictions, although Democratic governors in those states have the power to veto such legislation.

Myrna Pérez, who heads the Brennan Center's Voting Rights and Elections Program, predicted that voting restrictions would be a top priority for Republican lawmakers, since polls show the party's voters believe the election was fraudulent even though it's been "proven time and time again that election fraud is rare."

"What I think will be the trend this year is attacks rolling back mail voting and attacks rolling back accommodations that happened in response to the pandemic, which we usually don't see," she told CBS News. "We usually don't see a lot of people wasting their time and energy on mail voting because the people that used it, liked it, and the states that use it a lot, really like it."

Voting restrictions are just one way state Republicans hope to win back power after losing the White House and both chambers of Congress but holding their majorities in many state legislatures. Republicans are poised to have the power to gerrymander nearly 200 congressional districts while Democrats hold control over the boundaries of just 73 seats. With the 2020 Census already expected to cost states like New York, California and Illinois seats in the House, Republican-led legislatures could further redistrict their way to power and make it extremely difficult for Democrats to keep their narrow House majority in the 2022 midterms, creating a scenario similar to the 2010 midterms during Barack Obama's first term.

"Although conservatives traditionally cast themselves as guardians of governing traditions and institutions, today's Republicans pride themselves on finding ways to subvert them," wrote Thomas Patterson, a professor at Harvard's Kennedy School of Government. "They're out of power in Washington, but the states determine most of the rules governing registration and voting. Republicans control half of the state governments and share control in half of the rest. Sadly, the lesson that Republicans took from their November defeat was that they hadn't gone far enough in their efforts to suppress the vote."