The myth of bipartisanship: Will a fully radicalized GOP finally blow up D.C.'s silliest fantasy? 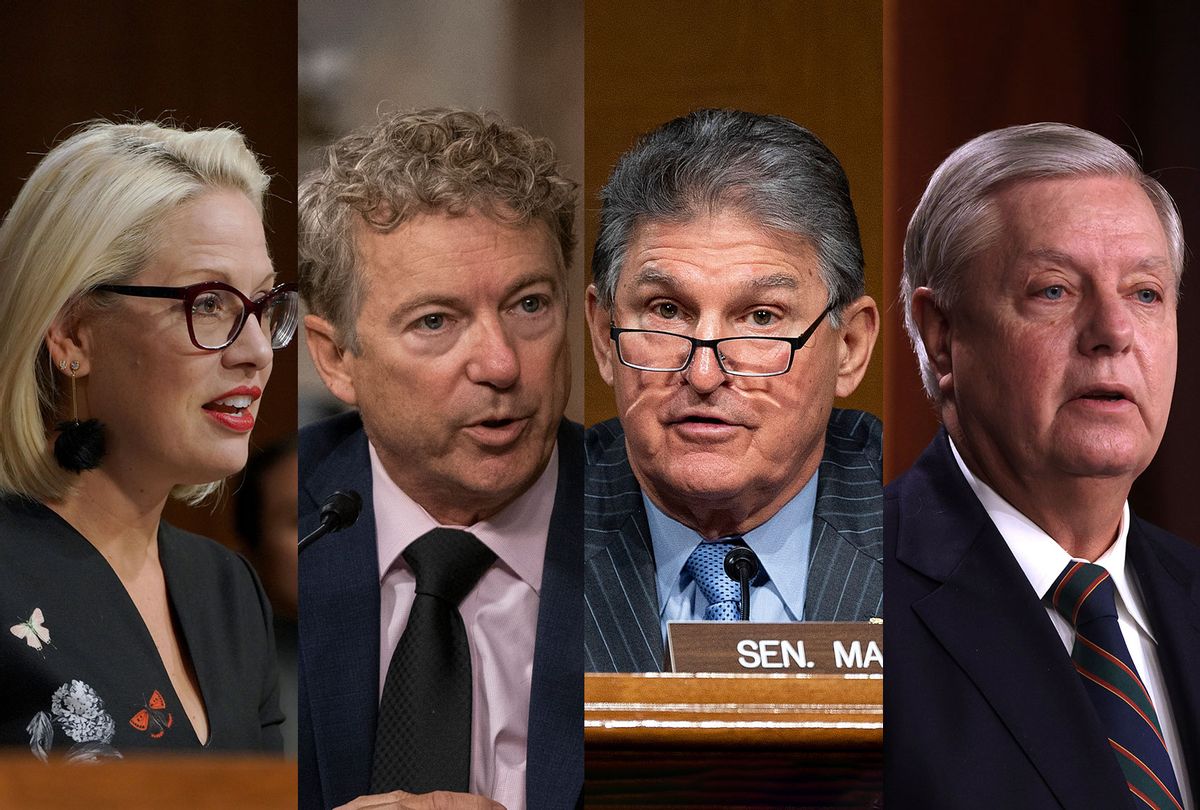 Well, now it's official: On Tuesday, nine out of ten Republican senators blessed Donald Trump's efforts at sending a mob to violently overthrow democracy. Despite the very real threat to their lives posed by the insurrection at the Capitol on January 6, 45 out of 50 Republican senators, answering the call of the ever-showboating Sen. Rand Paul of Kentucky, voted against proceeding with an impeachment trial of Trump for the crime of inciting an insurrection. This, even though Republicans know Trump is guilty. Senate Minority Leader Mitch McConnell, R-Ky., even previously admitted that Trump "provoked" the riot that led to 5 deaths and unhinged mobs roaming the Capitol looking to murder prominent politicians like Speaker of the House Nancy Pelosi and then-Vice President Mike Pence.

Yes, there's some nonsense cover story about how it's a procedural objection, but no one is fooled by this. Tuesday's vote was a proxy vote for the belief that no consequences should flow to Trump for his attempt to violently overthrow democracy. This was made obvious by comments from Sen. Lindsay Graham, R.-S.C., who is helping Trump on his defense and told reporters, "He just needs to keep doing what he's doing, and the trial will be over in a couple of weeks."

Really, it should be no surprise. The Capitol insurrection was just the last-ditch move by Trump, who spent the two and a half months prior looking for every angle he could to void the election results and declare himself a second term president by fiat. At every point in Trump's failed coup, GOP leadership passively supported him — and often actively, as happened with the effort to throw out the election results in Congress that was led by Sens. Ted Cruz of Texas and Josh Hawley of Missouri.

As Heather "Digby" Parton wrote at Salon Wednesday morning, there's "a concerted effort on the part of the entire GOP establishment to cleanse Donald Trump of any responsibility for what he did so that he might emerge once again as the hero they've all been waiting for."

Republicans' consistent support of Trump really should be putting more of a damper on the mewlings about compromise with the GOP from centrist Democratic holdouts like Sen. Kyrsten Sinema of Arizona and Sen. Joe Manchin. These two senators have been in the news lately because of their stated opposition to ending the filibuster. Even President Joe Biden, despite his welcome interest in forging ahead with a series of progressive executive orders, has expressed concerns about eliminating the filibuster, which gives the Republican minority veto power over any meaningful legislation.

The idea that that filibuster is some marvelous tool of bipartisanship has long been a childish fantasy. Republicans have manipulated it so they can pass their priorities — tax cuts and federal judicial appointments — with a straight majority vote, yet it magically remains in place as an insurmountable obstacle for Democratic priorities, such as ethics reform and a minimum wage hike.

Moreover, the notion that a Democratic majority can "work together" with a Republican minority is a cruel joke.

The only goal of Republicans is to make sure not just that Democrats fail, but that government itself fails, so they can continue campaigning on a fatalistic, cynical anti-government platform. This has been true since at least Barack Obama's presidency and has only become more so since them. In light of the widespread GOP support for Trump's insurrection, however, the calculus of the bipartisan feint has shifted even more into the negative. Now it's not only silly and delusional to imagine there can ever be a "working with" Republicans — it's what the kids might call problematic.

Republicans, after all, are the party of Rep. Marjorie Taylor-Greene of Georgia, whose calls for Democrats to be assassinated were just exposed by CNN. And while there's some performative hand-wringing from some Republican leaders on this, the easy bet here is that nothing will be done to sideline or eject Taylor-Greene from their caucus. It is for the same reason that 90% of Republican senators just signed off on the idea of not blocking Trump from running for office again, due to his fascistic insurrection. They know most of their voters are fine with outright overturning democracy now and are only too happy to follow suit.

This isn't a mere matter of political differences. This is an entire political party rejecting the very idea that political differences should be hammered out with democratic deliberation. Instead, they're backing — however cowardly, with their disingenuous process arguments — a president who tried to end democracy through violence.

Democrats have long liked to talk up "bipartisanship" and "compromise" because mainstream pundits reward them for it and voters — especially the kinds of voters who barely follow politics — react warmly to those words during focus groups. It sounds so nice, doesn't it, getting together with people who you disagree with, having a beer and coming to some sort of agreement? Of course, people like that fantasy, especially if they're largely unfamiliar with how obstructionist Republicans have become in the past couple of decades.

And sure, it makes raw political sense to appeal to those fantasies in campaign ads and even to make theatrical but ineffectual gestures towards bipartisanship in public. But what has been foolish for a long time now is actually trying to make good on the idea of compromise with Republicans so radical that their idea of "unity" and "compromise" is they get everything they want and Democrats can walk off a short pier.

Now, the situation has grown more dire. Sitting in a room trying to compromise with Republicans means trying to work with people who are just fine with Trump sending a violent mob after Congress. So fine, in fact, that they aren't interested in taking what should be a sensible step in convicting Trump so that he can't run for office again.

And no, the fact that Trump's coup failed is no excuse to not take it seriously. At the risk of having people yell "Godwin's law" at me (though Mike Godwin himself said it doesn't count in with actual fascism on the rise), it's worth remembering that Hitler's first attempt to overthrow democracy also failed. Giving men like Trump a chance to regroup and try again is not a good idea!

Even the most devout believers in "bipartisanship" must understand that the idea is built upon a more fundamental idea, which is democracy itself. That's the whole point of democratic governance, that different political factions have to work through problems deliberatively, instead of trying to cheat or use violence.

The Republicans have become radicalized against democracy itself. They've elected to put themselves outside of the systems of democratic discourse. It's really okay to take them at their word and stop trying to work in the system with people who are happy to destroy the system. It is furthermore a moral obligation to minimize contact and compromise with people who are just fine with sedition.

There are a lot of reasons to overturn the filibuster sooner rather than later, starting with the fact that Americans elected Democrats to get things done and will not re-elect them if they fail to make good on that promise. But the moral seriousness of the problem just rose dramatically with Tuesday's vote. Republicans are faced with a stark choice between supporting or rejecting democracy. As long as they continue to do the latter, Democrats should shun Republicans as much as possible, instead of carrying on like everything is normal.