Republicans are concern trolling President Biden on his promises of "unity." They should be ignored 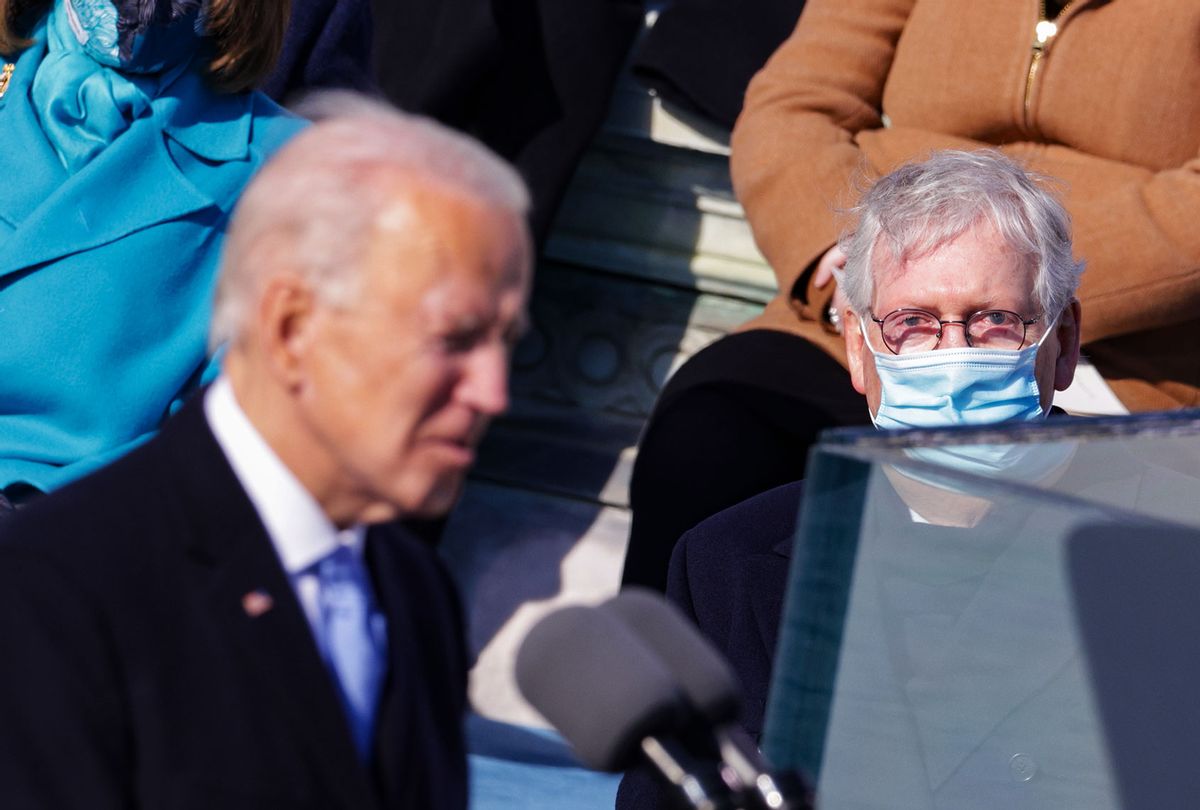 It stands to reason that in a politically divided country like the U.S., presidential hopefuls would run for office promising to bridge the divide and "bring people together." Polling always shows that if there's one thing the people want, it's for the two parties to stop fighting and "get things done." They may say they want compromise and bipartisanship as well. But when you drill down to what they actually mean by that, it's pretty clear that they really want their team to dictate the terms and by "compromise" they really mean they want the other side to capitulate. Bipartisanship is just another word for "my way or the highway."

All of this has gotten demonstrably worse in the last few years with the rise of social media and right-wing media. For Republicans to compromise with the Democrats today it would signal to a whole lot of their constituents that they are giving in to pedophile cannibals who wear the skinned faces of dead children as masks. They've left themselves very little room for good faith negotiations.

On the other side of the table, you have Democrats who have a hard time finding common ground with people who call for their execution, incite insurrection and stand by as a violent mob of supporters storms the Capitol and marauds through the hallways, yelling "I'm coming for you!"

These are things that make "compromise" difficult in today's political climate.

Still, presidential candidates continue to promise to do it. Barack Obama came to national attention four years before he ran with a famous speech at the Democratic National Convention in which he proclaimed that we are not divided by Blue states or Red states. His 2008 campaign was built on the idea of "hope and change" but a big part of that was hope that the country could change and come together in a common purpose.

He really tried to do it too.

Obama's Grand Bargain was designed to bring the Republicans on board with some of his big ideas by getting together with them on cutting social security, Medicare and Medicaid in exchange for limits on carbon emissions and an agreement to raise taxes to help pay down the deficit. I think we know how that went. Rush Limbaugh came out of the box saying he didn't want Obama to succeed and would press Republicans to oppose him every step of the way. Later, Minority Leader Mitch McConnell, R-Ky., made it known that his primary goal was to make Obama a one-term president.

And what did all that obstruction add up to? Obama "failing" to live up to his promise to bring the country together. How convenient?

When he left office, Obama had a 57% approval rating, but only 27% saw the country as more unified. At his final State of the Union address, he admitted it was the greatest regret of his presidency. No doubt Mitch McConnell and Rush Limbaugh felt proud as punch, however.

Obama's so-called failure to unify the nation was followed by the election of the crude demagogue Donald Trump who ran on the most obnoxious, divisive agenda in modern memory. But even he promised unity in his own very special way. On January 15, 2017, just days before he was inaugurated he tweeted:

"For many years our country has been divided, angry and untrusting. Many say it will never change, the hatred is too deep. IT WILL CHANGE!!!!"

That was a day after he had posted that then-Congressman John Lewis, D-GA, a Civil Rights Movement icon, was all talk and no action, advising him to clean up his allegedly crime-infested district in the Atlanta suburbs. I don't think anyone ever did anything but chortle at the idea Trump wanted to unite the country and the many ways in which he ended up exacerbating our divisions would take days to recite.

In fact, when Joe Biden announced his run for president it was explicitly based upon the idea that he wanted to "heal the soul of America" which he said Trump had wounded grievously, particularly with respect to his encouragement of white supremacy and racial division. Days after Donald Trump sicced an angry mob on Congress to try to overturn his election, Biden stood before the country and said, "It is time to end our "uncivil war."'

Of course, the minute he set about enacting the agenda he ran on the Republicans called for the smelling salts, shrieking that he isn't unifying the country, presumably because he isn't enacting their agenda instead. Take for instance the minority whip of the Senate, John Cornyn of Texas, who has apparently been assigned the role of chief GOP unity concern troll:

Actually, Donald Trump only won 46.8% of the vote, but who's counting?

The point is that while McConnell has been holding the Senate hostage, demanding that he be allowed to have veto power over the agenda, and Republicans are planning to stage yet another Trump fealty pageant at his second impeachment trial, they have done exactly nothing to meet the new administration halfway. In fact, quite a few of them refused to accept the election results at all and most of the rest stood silent for weeks as Trump perpetrated the Big Lie that Biden had stolen the election.

As Salon's Amanda Marcotte says, "the Republicans have become radicalized against democracy itself" and any hopes of bipartisanship are whistling past the graveyard.

That should be obvious to anyone paying attention but it didn't stop the New York Times Editorial Board from hand wringing over Biden's use of executive orders, most of which have been reversals of Trump's odious attempts to destroy what was left of the country's international reputation and make the lives of Americans as miserable as possible — a fact curiously unmentioned by the Times. They say legislation is a more durable way to make policy and they are right. But when you have to get it through people whose power depends on constituents who are now convinced Trump is going to be inaugurated on March 4th, I'm afraid it's going to be a waste of time.

Biden will not be able to win over Trump voters or his Republican opponents in Congress who are beholden to them. But he can unify a majority of the country around an agenda that materially improves their lives and makes them feel as if they are living in a civilized country.

According to a new Crooked Media/Change Research poll, "there is an appetite for bold action, and little tolerance for obstruction" among the public and the Democrats have much more to lose by trying to appease the other side than by moving fast and going big, whether it takes Executive Orders, changing the Senate rules or passing legislation through reconciliation.

It's a big job. We haven't ever been truly civilized and we have some very urgent problems facing us. Worrying about the obstructionist Republicans' unity concern trolling isn't one of them.