Trump sabotages Republicans’ planned defense of his insurrection, tries to turn second impeachment into a sideshow 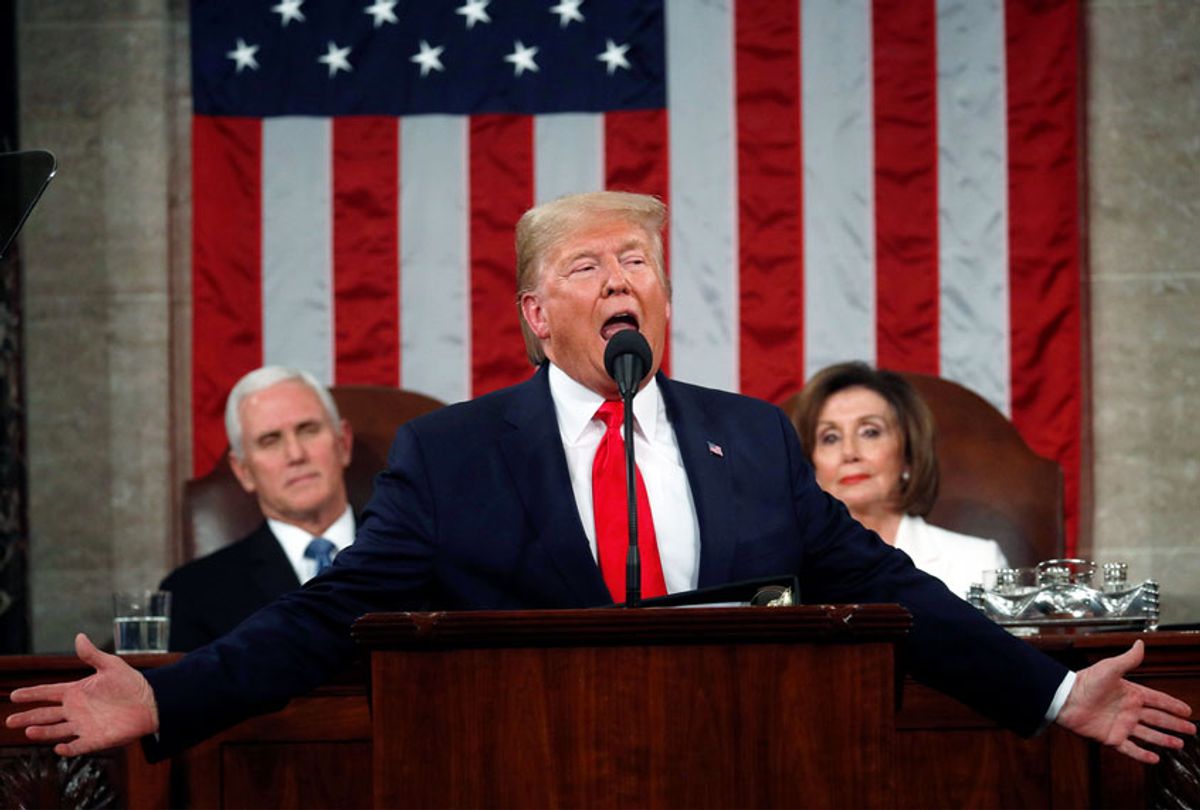 As the second impeachment trial of Donald Trump approaches, we are beginning to get some idea of how the House managers intend to proceed. The single Article of Impeachment alleges that Trump lied repeatedly about the results of the election and called people to Washington, D.C. for a rally at which he incited them to "violent, deadly, destructive and seditious acts." It cites his earlier attempts to subvert and obstruct the certification of the results of the election, including that astonishing phone call in which Trump openly asked an election official in Georgia to "find" the votes needed to overturn the election in his state.

Senate Majority leader Chuck Schumer told MSNBC on Saturday that the trial will "show the American people — vividly, on film — what happened there in the Capitol, what Trump said. … All of America will see it."

There's a lot of video and audio available to tell that story — much of it produced by the insurrectionists themselves. The call between Trump and Georgia Secretary of State Brad Raffensperger, a Republicans, was also taped. There are dozens of court transcripts from indicted insurrectionists who say they believed that the president had told them to do what they did. It is well documented that Trump did what he is accused of doing.

This is why Republicans have offered up a defense for Trump that would evade the charges altogether and argue simply that the Senate has no constitutional right to impeach him at all since he is already out of office. The fact that then-Majority Leader Mitch McConnell, R-Ky., made sure the Senate was not in session to receive the Article of Impeachment until Joe Biden took office gives away the game on that one.

In other words, Republicans believe the best way to let Donald Trump off the hook for telling a crazed mob to march to the Capitol on January 6th to overturn the election they all know he lost, is to pretend that the process is fundamentally illegitimate. This is a highly disputed claim but it's really all they've got.

Trump, however, is apparently having none of it.

Just a little over a week before he is to file briefs in the case, he abruptly parted ways with most of his legal team, a group of respected lawyers from South Carolina led by a former prosecutor named Butch Bowers. The split, which was made public on Saturday, reportedly occurred over differences of opinion about strategy. Trump's former lawyers believed that his best defense was the one the Senate Republicans handed him on a silver platter last week when 45 of them cast a vote making it clear that they backed the "illegitimate process" argument and would acquit Trump of the charges on that basis.

According to both the New York Times and the Washington Post, Trump insisted that his lawyers mount a defense focusing on "his baseless claims about election fraud." Bowers informed Trump they could not do it. The reason for that, of course, is that they would have to lie and like many of the lawyers Trump has employed since the election — other than the unhinged legal freakshow of Rudy Giuliani, Sidney Powell and Jenna Ellis — they refused to break the law on his behalf or participate in his propaganda campaign to undermine the election results.

The Times also reported that the newly pardoned Steve Bannon, back in Trump's good graces and advising him on his future, believes that Trump should go to the floor of the Senate and make his case in-person because "he's the only one who can sell it." There was also speculation that Trump might let his old buddy Giuliani take over as he's been champing at the bit to do from the beginning, but since Giuliani is actually a participant in the incitement, telling the January 6th mob that there should be "trial by combat," it seems the president's advisers have succeeded in keeping him from the case. And it was not entirely unlikely that Trump just would not bother to put up a case at all, allowing McConnell and his other henchmen in the Senate to make his argument for him and call it a day. After all, he already believes he's guaranteed an acquittal as Trump's reportedly told people he couldn't see why he should have to spend money on lawyers if he already has the verdict in the bag.

But Trump did end up hiring two lawyers to replace the team that left on Saturday. Roger Stone's former attorney David Schoen, who had evidently already been working with Trump, now assumes the lead role. Bruce Castor, a former DA from Pennsylvania best known for refusing to prosecute Bill Cosby, has also been added to the team. According to the news release announcing their hiring, they both believe that that the trial is unconstitutional — which doesn't actually say much about how they plan to defend the president.

Both Schoen and Castor have reputations for theatricality. In Schoen's case, that's a literal description since he studied at the Actor's Studio in New York and has recently acted in a docudrama about the late accused child trafficker Jeffrey Epstein, whom he met with just days before Epstein committed suicide. Schoen describes himself as someone who has represented "reputed mobster figures: alleged head of Russian mafia in this country, Israeli mafia and two Italian bosses." Now he's representing Donald Trump. Castor was evidently once an up and coming Republican politician in the state of Pennsylvania but his Cosby decision derailed his career when he turned to mush on the witness stand.

Trump's new attorneys would appear to be the kind of lawyers who will do for his impeachment trial what Dr. Scott Atlas did for his COVID response. When asked about the Democrats' reported trial strategy, Trump adviser Jason Miller told Axios' Mike Allen: "'Emotionally charged' is code for 'We know this is unconstitutional, but we're going to try to put on a show anyway.'"

Trump likely sees this trial as a way to once again rally the base with a spirited "defense" stating the election was stolen, this time with an implicit admission that he believes the insurrection was justified. If he does that all the pundits insist it's going to make the GOP senators very nervous and they might end up voting to convict. Will it? Nah. They'll find a way to make sure he faces no accountability at their hands. We have to stop pretending otherwise.

The question is whether the "show" the Democrats put on to prosecute Trump will be more convincing to the American people than whatever "circus" Trump is planning. If you want emotion, he's got plenty of emotion ready to go. He might even get some of that incitement going all over again. But the evidence of what he did that day is irrefutable. He's guilty as sin.