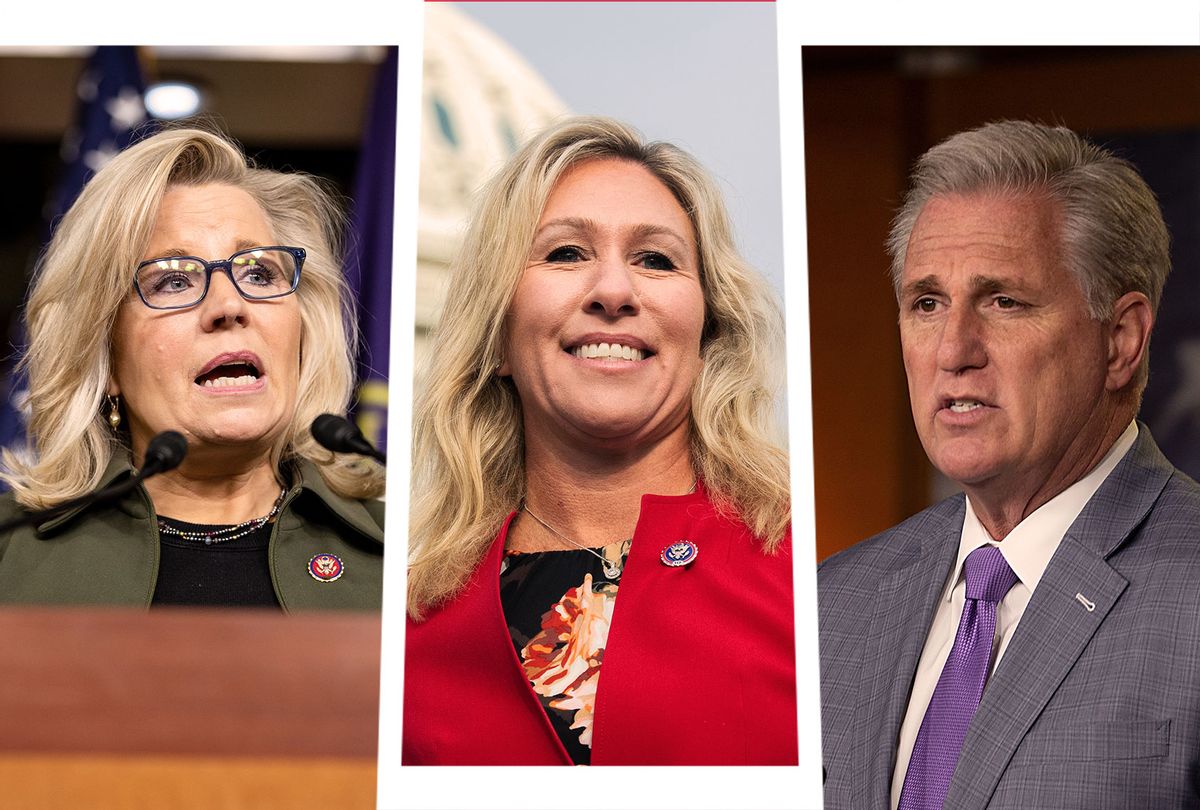 The House GOP caucus voted 145-61 in a secret ballot to keep Cheney, the No. 3 Republican in the chamber, in her leadership position, following a contentious four-hour meeting in response to her vote to impeach former President Donald Trump. The conservative House Freedom Caucus pushed for Cheney to be removed as chairwoman of the House Republican Conference as punishment for her impeachment vote. Rep. Matt Gaetz, R-Fla., who traveled to Wyoming recently to attack Cheney at a rally, insisted on former Trump adviser Steve Bannon's podcast that "we have the votes to remove" Cheney before his caucus overwhelmingly voted in her favor. Trump also worked behind the scenes to push for Cheney to be booted from the GOP leadership, according to CNN.

Cheney, who has said there has "never been a greater betrayal by a president" than Trump's incitement of the deadly Capitol riot, refused to apologize for her vote during the meeting, according to the Associated Press. She gave an eight-minute speech that sources described to CNN as a "calm yet firm defense of the Constitution."

Some of Cheney's critics were combative. Rep. Matt Rosendale, R-Mont., "loudly and angrily" berated Cheney and Rep. Scott Perry, R-Pa., alleging that they had "aided and comforted the enemy," according to CNN. Other Republicans fired back, with Rep. Adam Kinzinger, R-Ill., a frequent critic of Trump, defending Cheney and lashing out at House Minority Leader Kevin McCarthy, R-Calif.

McCarthy, who did not publicly say he would vote in Cheney's favor, told reporters after the meeting that he defended her to his colleagues.

"People can have differences of opinion," he said. "That's what you can have a discussion about. Liz has a right to vote her conscience."

Prior to the vote, Greene, a longtime QAnon conspiracy theorist who is facing removal from House committees for pushing conspiracy theories about school shootings and wildfires and calls to execute top Democrats, apologized to her colleagues. Greene said it was a mistake to subscribe to QAnon conspiracy theories, claimed not to know what "Jewish space lasers" were and defended her comments alleging that the Parkland and Sandy Hook school shootings were "false flag" events, according to The Hill, though it's unclear if she also discussed her calls to execute Democrats. "She received a standing ovation from some members of the caucus at the conclusion of her remarks," the outlet reported.

"I think it would be helpful if you could hear what she told all of us," he said. "Denouncing 'Q-On,' I don't know if I'm saying it right, I don't even know what it is."

McCarthy knows exactly what QAnon is. He was previously forced to denounce the conspiracy theory multiple times after Greene and fellow QAnon supporter Rep. Lauren Boebert, R-Colo., won their primaries and later their elections.

"I do not agree with their beliefs at all," McCarthy said during a press conference last August while discussing Greene's apparent beliefs. "There is no place for QAnon in the Republican Party," he told Fox News that same day.

Though Greene may have apologized during the meeting, she has shown no public contrition for her comments and on Tuesday tried to fundraise off the controversy.

"With your support, the Democrat mob can't cancel me," she tweeted in one fundraising appeal.

Over the weekend, Greene declared, "I won't back down. I'll never apologize." She later said in an interview with former Trump aide Sebastian Gorka that she has "said things I shouldn't say at some time or another, but I don't think I have anything to apologize for."

"It's me this week, and it'll be someone else next week, and our leaders are too weak to stand up against it," she said in another interview with fellow right-wing conspiracy theorist Dinesh D'Souza. "That is why Republican voters will not vote for them anymore."

Greene even insisted in an interview with the Washington Examiner that Democrats were "dumb" and "stupid" because "they don't even realize they're helping me."

House Majority Leader Steny Hoyer, D-Md., said on Wednesday that the House will vote to remove Greene from the House Budget and Education and Labor committees. McCarthy met with Greene and later with Hoyer, and reportedly planned to offer a deal in which Greene would only lose her Education and Labor assignment or trade that position for a seat on the Small Business Committee. Democrats didn't bite.

"It is clear there is no alternative to holding a Floor vote on the resolution to remove Rep. Greene from her committee assignments," Hoyer said after meeting with McCarthy.

McCarthy previously removed former Rep. Steve King, R-Iowa, from his committee assignments after he made comments defending white nationalism and white supremacy. He ultimately lost to another Republican in a 2020 primary.

Republicans have tried to shift blame amid the growing backlash to Greene's comments. McCarthy accused Democrats of "choosing to raise the temperature" with a "partisan powergrab" and compared Greene to Rep. Ilhan Omar, D-Minn., who he said had "spread anti-Semitic tropes." Omar in 2019 criticized Israel's influence in American politics and later apologized after being accused of anti-Semitism.

Republican leaders have privately pushed members to unite against the "harmful" precedent it would set for the majority party to punish a minority member for comments she made before joining Congress.

"If we are now going to start judging what other members have said before they're even members of Congress, I think it's going to be a hard time for the Democrats to place anybody on committee," McCarthy told reporters on Wednesday.

House Rules Committee chairman Jim McGovern, D-Mass., whose committee has advanced a measure to strip Greene of her assignments, said the move was the "right thing to do."

"We have never had a member like this before. This is truly sick stuff," he told reporters. He rejected the Republican argument, asserting that "if the precedent's going to be that if somebody advocates putting a bullet in the head of a member … if that is going to be the new determination as to what it takes to throw people off of committees, I'm fine with that."