Why you should be eating biscuit pizza, an endlessly versatile and crowd-pleasing food with soul

Karter Louis wants us to remember where American food came from, and he feels the route there is on a biscuit 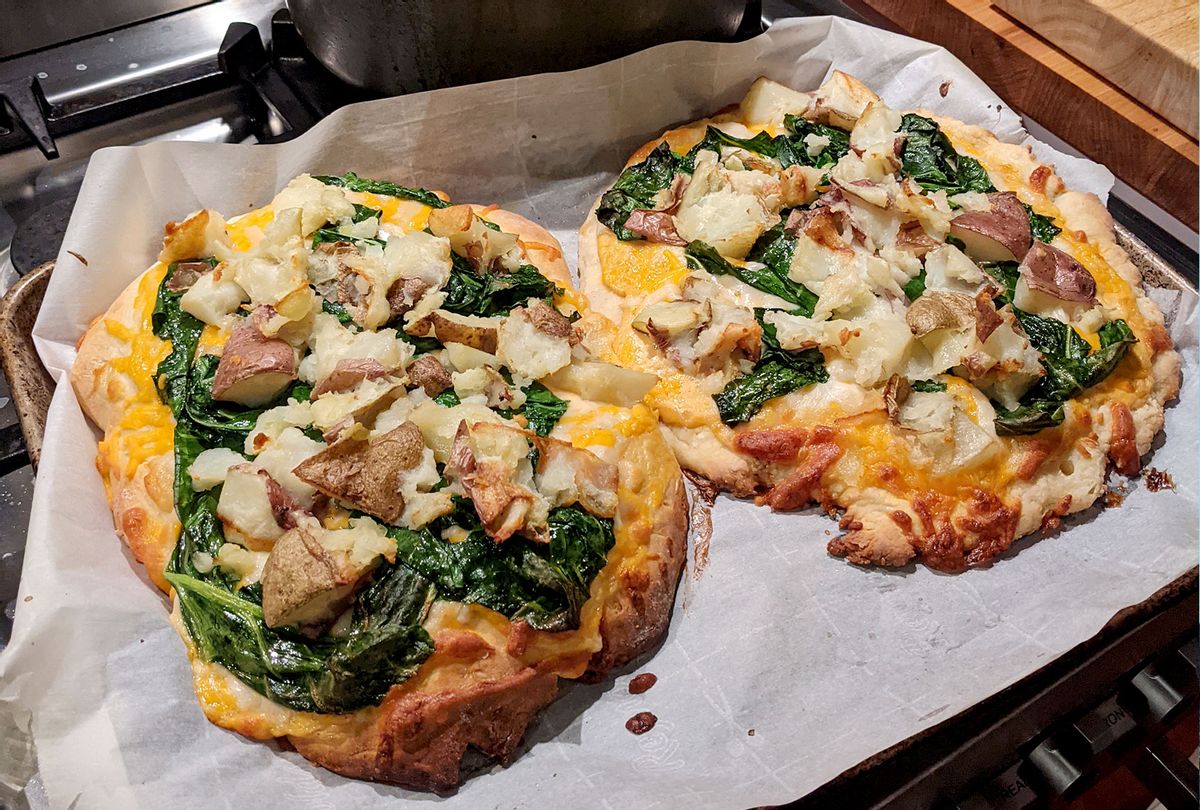 Karter Louis wants us to remember where American food came from, and he feels the route there is on a biscuit. Specifically, a Soul Slice biscuit pizza, the San Francisco by way of Louisville restaurateur's latest venture.

This is not, he hastens to note, to be confused with Italian pizza (another American creation as we know the dish, he would add). No. This is a straight-up biscuit crust, a most American of ingredients, topped with soul food. Because, he says, "the landscape of traditional American cuisine is based on soul food."

"Southern food is just hijacked soul food in a lot of cases," he points out. As for comfort food, well, that's different for everyone and doesn't necessarily have to be what we might call southern or soul. It's nori and rice for him, or ramen, after his years spent living in points across Asia from Shanghai to Taiwan. 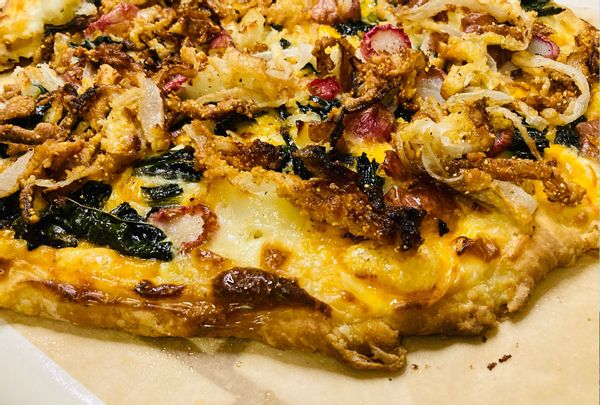 RELATED: The best deep dish pizza is not from Chicago

But for Karter, and for me, it's also biscuits. "Do you know the history of biscuits?" he asked me with his usual exuberance when we met up on Google Meet video chat recently. Um, no. I have enjoyed many a biscuit at Hillbilly Tea, his late, great, Appalachian restaurant in Louisville, Ky. And I certainly grew up on them, loving both my grandma's "Tony biscuits," her homemade drop biscuits I ate with cold bacon and store-bought biscuits that squished satisfyingly out of the can.

It turns out I've been tucking into a quintessentially American food all along. A "biscuit" in the rest of the world is what we'd call a cracker or cookie, Karter says. European sailors relied on an early form of biscuit called hardtack on the journey to North America. Though that hard, dry crackery biscuit tasted awful, it paved the way for what would become the fluffy delight we dig into smothered in gravy at diners now.

I didn't know Karter until about 10 years ago when he opened Hillbilly Tea in Louisville, and we became fast friends, often eating together while we talked non-stop about other food we've eaten or had plans to eat. Somehow, we didn't learn that we each grew up making the same thing: biscuit pizza. The Frankencreation of canned biscuit dough, Ragu red sauce and American cheese that I called pizza was the first thing I cooked for myself as a kid. Without enough spending money to get the real deal from a pizzeria, Karter, too, made biscuit pizza. It never really left his mind, though I hadn't thought about it in years until I learned about his plans.

The plan for a soul food place had been on his back burner for a long time, but it took a catastrophe for it to really spark. Devastated, he says, by how much the pandemic decimated the hospitality industry, Karter wanted to do something positive. Something where employees wouldn't just earn a living wage, but would share in profits and could even become owners. With a business partner, he developed Soul Slice as a B Corp (meaning they have to do good), where every employee starts as a dishwasher, gets cross-trained in every job, is paid a salary and has the opportunity to rise through the ranks.

On the menu? Foods from his childhood. Foods that take us back to our roots as a country. Think yams, collards, fried chicken, green beans, blackeyed peas, ham hocks, okra. And not just because they taste good, and for many of us, are comfort foods. The very idea is to pay homage to, and to honor, the enslaved people who cooked these foods. 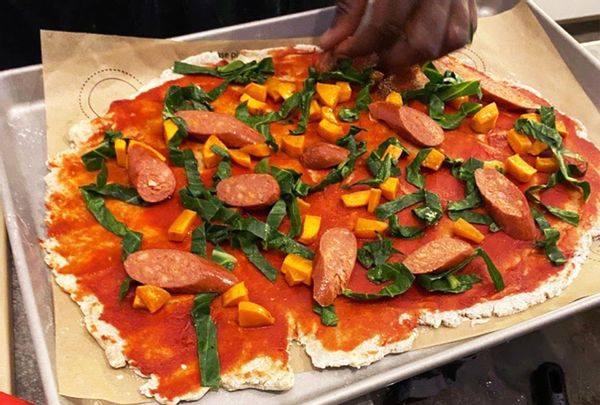 Where do you think many of these foods came from, Karter asks. "How do we have rice? It's not indigenous to America. Rice came in the pockets of the slaves . . . There are many ingredients in American cuisine that we're just like, 'Oh, we just have it?' No, we don't just have it. Like, it was cultivated by someone. And that's the part of soul food that I want to give homage to, because it's forgotten about. We don't get the credit for being the cooks, you know, the slaves were the ones talking to the Native Americans to figure out what would kill us and what would not kill us."

And that ability? "It's not just because we were enslaved and told to cook," he says. "It's because we brought the skill to America to cook."

"Most people don't realize that most slaves came from West Africa," Karter says. And that was a trading post, like a Silk Road "with spices from India, every kind of food and the West Africans were exposed to all this." They knew what to do with these ingredients, he says — and that has never been recognized.

RELATED: Homemade pizza in under an hour is entirely possible — & entirely delicious

So yes, Karter says he takes issue with saying comfort food or southern food when we're talking about soul food.  "The reason why I wanted to do a soul food venture is because I don't think it ever got its due," he says. "If you look on any app — you grab your Caviar, or whatever. If you go to Yelp, soul food is just so shat on. It's not a real category. It became so important to me as I was working on Hillbilly Tea, and southern food was becoming a thing. I didn't like the blurred line."

The foods Karter's topping a biscuit with reflect those special foods that African-American people fell in love with, he says.

He'll open Soul Slice in Oakland, first, as soon as they're funded. His hometown of Louisville is up next, and then they'll branch out based on feedback. "Texas is hot for us," he says, and he'd like to see shops in Harlem and New Orleans. But you don't have to wait for Karter to come to your town. Biscuit pizza is easy enough for a 10 year old, and it translates well to a more discerning palate. 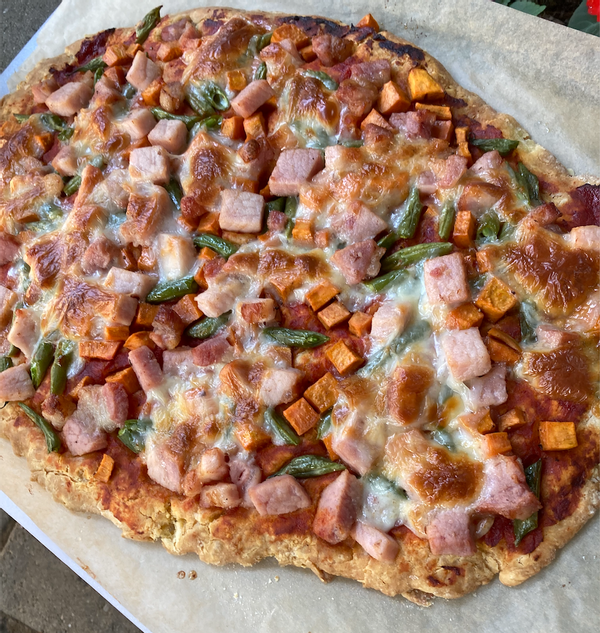 It also adapts to your skill level, as well as how much work you want to do. Pop a can, top it with a jar of sauce and cheese and call it a day. Or make your own homemade dough, and go to town with Karter's mac cheese sauce (bechamel with cheddar mixed in), collards and sweet potatoes. Make a gluten-free crust, or use shortening instead of butter and stick with veggies on top for a vegan version. Biscuit pizza is endlessly versatile and crowd pleasing.

Whatever you do, maybe just take a minute before you sit down to eat. Think about the stories behind the food, the soul of it. And dig in.

For more from our pizza oven, check out: