Owning a home has always been part of the American dream, but the sketch skewered the habit of fantasy scrolling 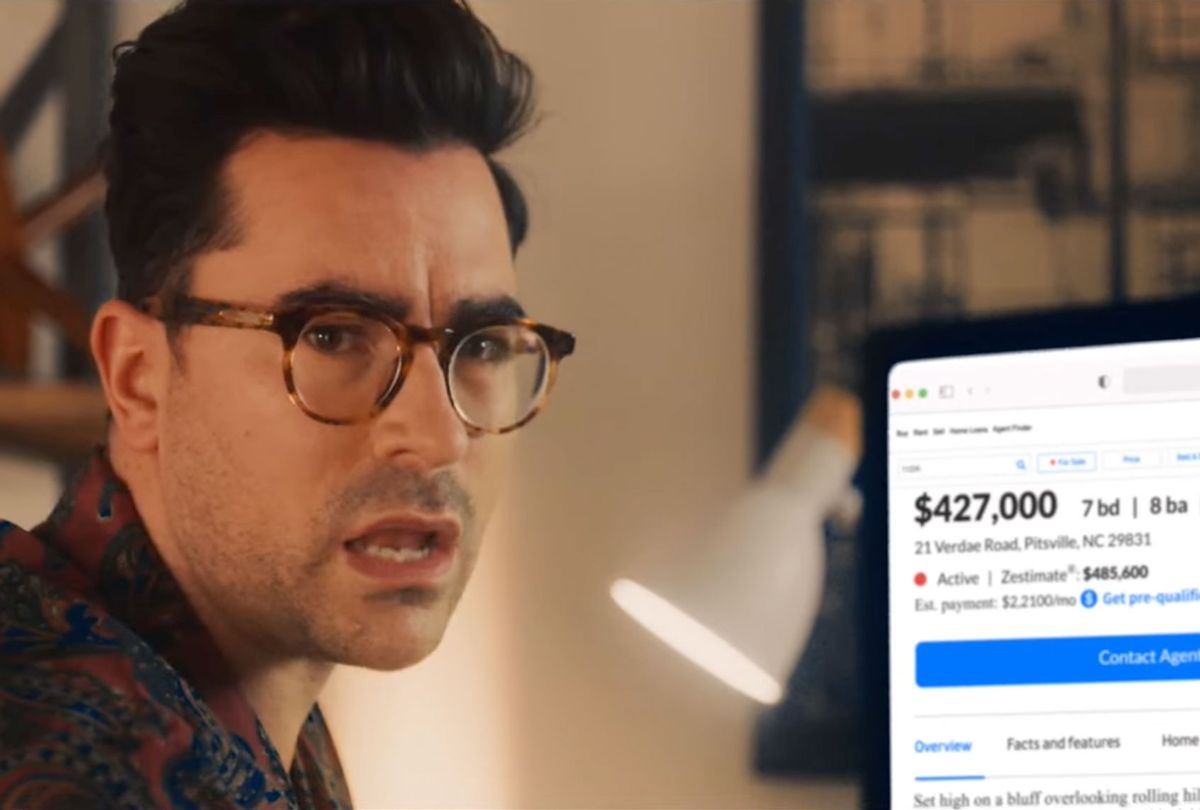 I have a group chat with my three best friends from college and, as the pandemic has dragged on, our conversation has primarily become just a running series of real-estate listings.

"Look at this place," I texted last week, sending a link to a schoolhouse-turned-farmhouse in Vermont, which was in desperate need of some maintenance. My friends responded obligingly, "Oh my god, so much space," one wrote, while another texted, "Think of the things you could do with that kitchen!" They know I have no intention of moving right now, nor do they, but that doesn't stop us from trawling online listings, searching for zany wallpaper, clawfoot tubs and, more recently, conversation pits.

My boyfriend and I play a similar game, beckoning the other to look at listings for pricy lakefront condos in Chicago, where we're both from originally, with a kind of breathless enthusiasm — which is one reason why  this weekend's "Saturday Night Live" sketch, simply titled "Zillow," felt just a little too real.

"The pleasure you once got from sex now comes from looking at other people's houses," Nwodim continues, as the camera eventually pans to Bowen Yang and guest host Dan Levy heading to bed together to scroll through Zillow. "The guest house has its own little kitchen," Levy says. "So bad." Yang proceeds to writhe in ecstasy.

"So what are you waiting for?" Heidi Gardner adds in a voiceover. "Pick up your phone now. Open the app, and tell us what you really want."

Viewers responded immediately. "We may be a divided country but I think most of us can at least agree that the Zillow sketch on SNL hit way too close to home tonight," one Twitter user wrote, while another responded, "As a 35 year old, the Zillow commercial is probably the best, most-accurate SNL skit I've seen."

Even Zillow's CEO, Rich Barton, tweeted a link to the sketch with the caption: "Wait. Have we been marketing Zillow wrong all these years???"

House hunting went from a necessity reserved for when you actually had to move to a kind of spectator sport, a development that was only catalyzed by networks like HGTV —  which, in 2016, overtook CNN as the third most-watched cable channel behind Fox News and ESPN — and publications like Curbed and Apartment Therapy, which break down popular listings and still run headlines like, "A Park Slope One-Bedroom for $528K and a West Village Apartment With Barrel-Vaulted Ceilings."

It's a lot of fantasy fodder, especially as home ownership feels further and further out of reach for many millennials, many of whom have weathered two recessions during their careers. Additionally, as NPR reported in 2019, student loan debt in the United States has more than doubled over the past decade to about $1.5 trillion, and the Federal Reserve now estimates that it is cutting into millennials' ability to buy homes.

"Homeownership rates for people ages 24 to 32 dropped nearly 9 percentage points between 2005 and 2014 — effectively driving down homeownership rates overall," wrote reporter Yuki Noguchi. "In January, the Fed estimated 20% of that decline is attributable to student loan debt."

In many cases, the pandemic has only exacerbated housing inequality across the nation as approximately 34 million people are in danger of eviction. However, home sales have boomed over the last calendar year because, as the Washington Post reported, Americans who have savings, stable jobs and good credit scores are taking advantage of the cheapest mortgage rates on record to bargain shop for larger home (a draw when you're social distancing and can't go out).

In July, new mortgage applications hit a level not seen since 2008 and, as realtor James Dietsche told the publication, "People are literally trying to get back to a house in the suburbs with a yard and a fence. Those are the houses that are blown off the market in two seconds."

The pandemic also had people who lived in more densely populated urban centers contemplating what it would be like to move to that kind of suburban home with a yard, and what their city rents could do when applied to a smaller town mortgage — which has perhaps become the hottest real estate fantasy.

Something that "SNL" writers obviously know too well.

"I'd never live in North Carolina," Dan Levy said during the sketch with a seductive smile. "But if I did, I could buy a big, gross mansion."