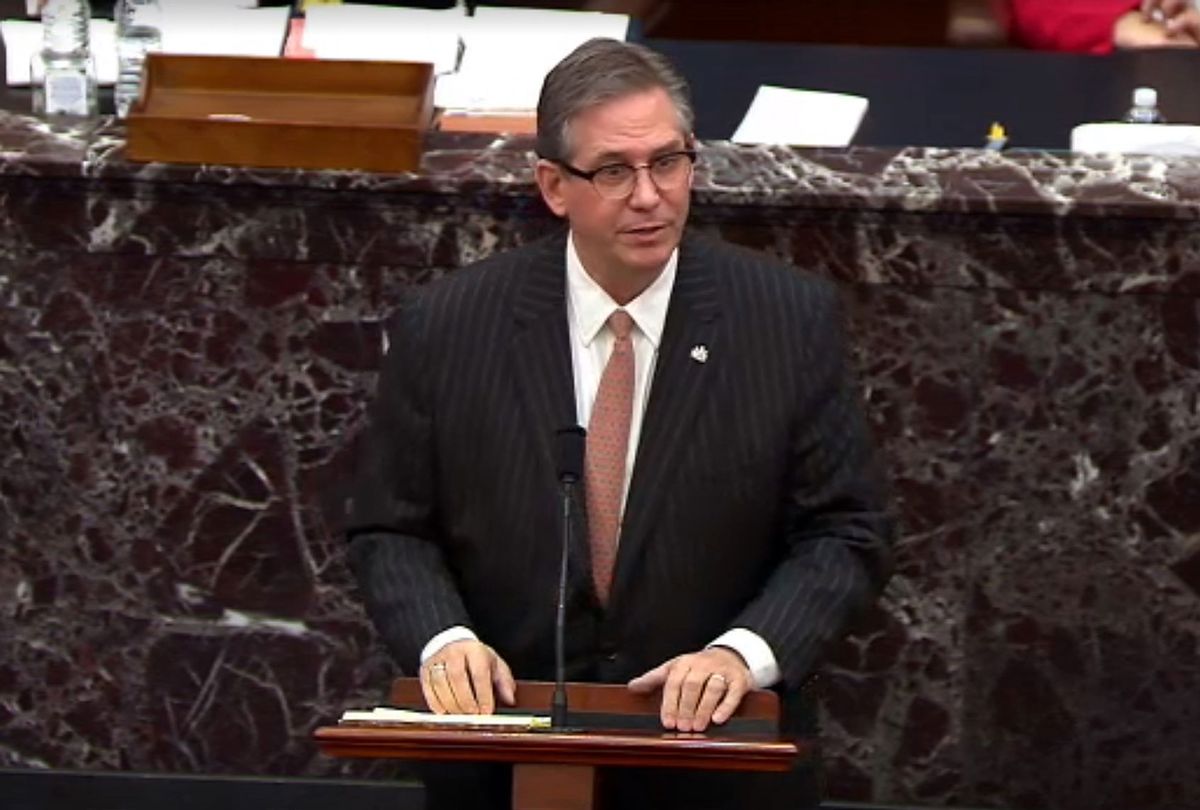 In this screenshot taken from a congress.gov webcast, Bruce Castor Jr. defense lawyer for former President Donald Trump speaks on the first day of former President Donald Trump's second impeachment trial at the U.S. Capitol on February 9, 2021 in Washington, DC. House impeachment managers will make the case that Trump was “singularly responsible” for the January 6th attack at the U.S. Capitol and he should be convicted and barred from ever holding public office again. (congress.gov via Getty Images)
--

Tuesday was the first day of Donald Trump's impeachment trial for inciting an insurrection, and, frustratingly, the day was devoted to the question of whether it was legal to even try Trump, now a former president, in the first place. The whole thing was a dog-and-pony show for Senate Republicans, who don't want to be caught looking supportive of an insurrection that failed. But they also don't want to offend their voters, who are still largely enthused about fascist insurrections and want to give Trump an A for effort. And so Republicans have settled on pretending they're springing Trump on a technicality — even though no one really believes such a technicality exists — in a pathetic bid to have it both ways. It felt like a waste of time because no one actually believes this trial is unconstitutional.

But there's one silver lining: The Democrats who are arguing the case as the House managers so thoroughly smoked Trump's defense that even Trump knows it.

Rep. Jamie Raskin of Maryland introduced a devastating video underscoring how Trump very deliberately sent an angry mob to storm the Capitol on Jan. 6 — telling them, "you're allowed to go by very different rules" than the usual expectations of non-violence — and highlighting the horrors of the insurrection, which left five people dead and multiple police officers seriously injured.

Raskin ended the House managers' arguments with a terrifying description of his own experiences that day, breaking into tears as he recounted the terror of his family members who were visiting him following the funeral of his young son the day before.

In contrast, Trump's lawyers presented arguments that were equal parts smug and incoherent. His first lawyer, Bruce Castor, condescendingly suggested that because people are understandably emotional about the insurrection their arguments are rendered irrational. It's an especially offensive argument to be made in defense of Trump, a man who is all id and no rationality. Castor's patronizing tone was made all the more annoying by the fact that his arguments were erratic and inconsistent nonsense. That's especially so compared to the devastating case made earlier in the afternoon by Rep. Joe Neguse of Colorado, who painstakingly laid out why the trial was constitutional and that no one doubted it before they needed a convenient excuse to let Trump off the hook.

But hey, don't take my word for it that the House managers left Trump's defense team a smoking crater. Trump himself reportedly believes it.

CNN's Kaitlin Collins corroborated the account. "I'm being told by two people familiar with former President Trump's reaction, he was deeply unhappy with that performance and borderline screaming," Collins reported.

"The former president — monitoring the trial on television from Florida — had expected a swashbuckling lawyer and instead watched what was a confusing and disjointed performance," Ashley Parker and Josh Daswey at the Washington Post wrote.

"As [Trump's lawyers] droned on, he grew increasingly frustrated with the sharp contrast between their muted response and the prosecution's opening salvo," Gabby Orr and Meredith McGraw at Politico reported.

To be fair to Castor and David Schoen, Trump's other lawyer who argued on Tuesday, their task is impossible. There's no way to mount a convincing defense of Trump, who spent months publicly inciting his followers to violence in incredibly unsubtle ways. But Trump, ever the believer in the magic of bullshit, clearly believes there's some way to spin this so he looks like the good guy. And why not? "The Apprentice" used TV stratagems to trick Americans into believing Trump was a successful businessman. He successfully bamboozled 74 million Americans into thinking he was qualified to be president. Why shouldn't he imagine that a little razzle-dazzle would work this time around?

In any world where Senate Republicans gave a crap about justice, rationality, good argumentation, or even reality, Trump's conviction would be a done deal. Sadly, however, Republicans care for none of those values. Only one Republican, Sen. Bill Cassidy of Louisiana, was so embarrassed by how bad Trump's legal arguments were that he switched from opposing the trial to supporting it, joining only five other Republican senators who are acceding to reality on this one. The other 44 Republicans spent the trial looking away, doodling, faking interest in paperwork, or otherwise distracting themselves from their own choice to self-humiliate by pretending to believe a word of Trump's stupid defense arguments.

Still, the former president's fury tells us something.

Trump is a profoundly stupid man, but he has an animalistic instinct for what makes for watchable TV. He clearly understands that the House managers trying the case are making him look bad. That is all the more reason why Democrats shouldn't want to hurry this trial along, but draw out the pain by calling witnesses. Republicans are too cowardly to convict Trump. Democrats only have one chance of humiliating him so badly that he withdraws from politics for good. It very well might be a faint chance, but it's a better bet than expecting the majority of Republican senators to grow a spine and vote to convict.