Bon Appetit, Sqirl and the importance of food safety amid the home canning resurgence

With the rise of home canning, master canners and food preservers worry there could be a rise in botulism 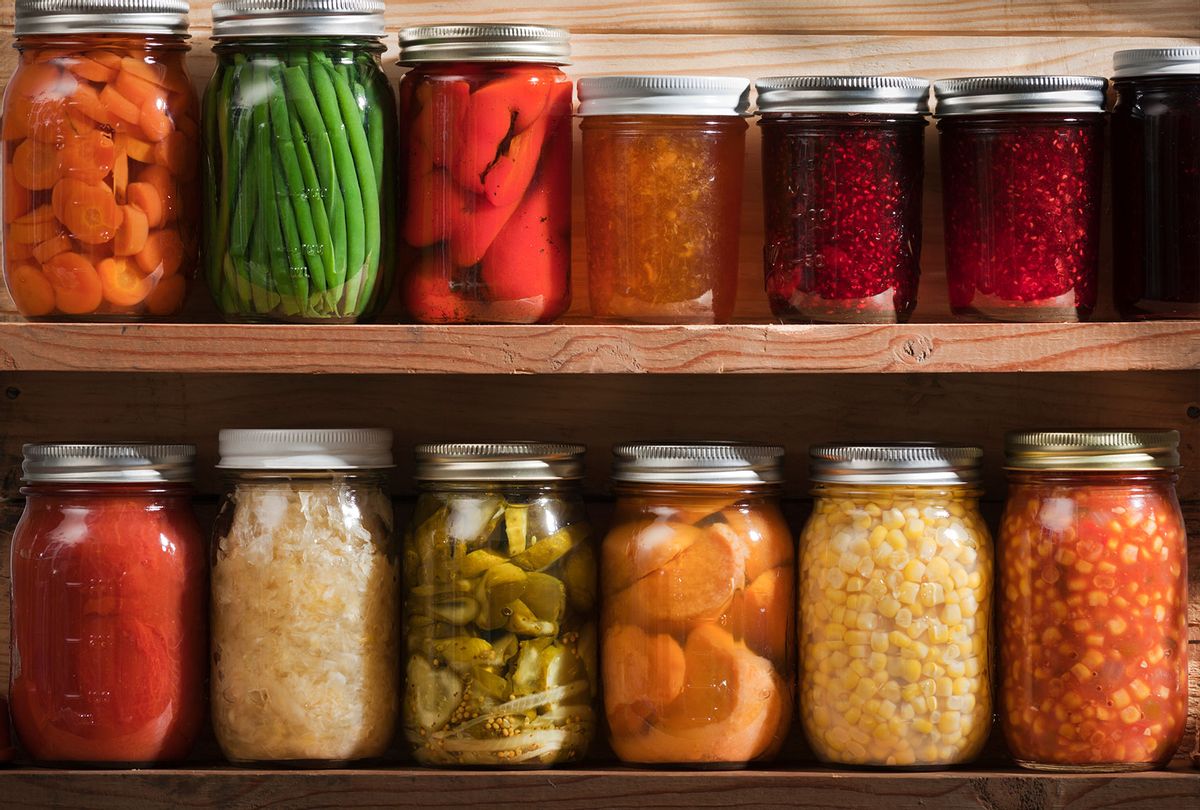 Two wooden shelves holding a variety of canned vegetables and fruits, lined up in rows of glass jars. (Getty Images)
--

Leni Sorensen, a home provisioning skills instructor who has been growing and processing her own food for almost 50 years, says that "canning has taken off volcanically" over the past year.

It makes sense — we all know people who decided to join the informal urban homesteading movement that grew out of the pandemic. Some began baking bread, while others started practicing fabric crafts, purchasing baby chickens and setting up victory gardens. There was a collective desire to become more self-sufficient in the face of disruptions in food supply chains, which combined with panic buying, left many grocery shelves briefly empty. The fact that there was often an Instagram-worthy result — freshly-scored loaves and flourishing raised beds — likely bolstered the trend.

Canning was an obvious next step, both as a way to preserve the food these urban homesteaders had grown and — to borrow a term from cultural anthropologist Sharon Macdonald — as "the fetishization of past everyday life." There's an undeniable hipster appeal to food in Ball jars; the plot of Simon Rich's "American Pickle" and Portlandia's "We Can Pickle That!" sketch are proof. As a result, there have been numerous, nationwide jar, lid and pressure canner shortages since last March.

While Sorensen is encouraged by the increased interest in preserving food, she's also worried that it will lead to an increase in foodborne illness, specifically botulism — a relatively rare but deadly illness caused by a poison produced by the germ known as Clostridium botulinum. Found in soil, the germ can survive, grow and produce a toxin in certain conditions, such as when food is improperly canned. You can't smell or taste it, but it can cause severe nerve damage, resulting in paralysis — or even death.

Sorensen is involved in several Facebook groups about canning. Membership has surged, as have posts and photos showing risky techniques. "Some people who are new to canning just don't seem to have an idea of the potential dangers, because I don't think botulism is as common a term in our lexicon as it used to be," she said.

Sorensen is correct — botulism outbreaks are less common than they used to be, but a deadly outbreak is what gave rise to America's food safety system. As Anna Zeide wrote for Smithsonian Magazine, industrial canners worried about it deeply.

"Their worst fears materialized in late 1919 and early 1920, when a series of deadly botulism cases struck unassuming consumers throughout the country, killing 18 people in Ohio, Michigan and New York, with smaller outbreaks in other states," she wrote. "The deaths were traced back to canned black olives, a mainstay of hors d'oeuvre plates and a delicacy often reserved for special occasions. The olives had been packed in California and then shipped across the country to far-flung destinations, the result of a newly nationalized commercial food system."

This led to the formation of a Botulism Commission, which eventually resulted in strict regulations for the processing of various grocery items.

But the term "botulism" was seen more in headlines in early February than likely over the last decade combined. On his popular "It's Alive" series for the Bon Appétit Test Kitchen, host Brad Leone prepared canned mussels and lobster using a technique known as the water-bath method.

The process is widely considered to be unsuitable for seafood preservation. A pressure canner must instead be used for the safe canning of meats and seafood, according to the Food and Drug Administration's canning guidelines.

As The Washington Post reported, Bon Appétit initially kept the video online and added a comment that said the method in the video was only being used "for camera" to show viewers "how proteins coagulate and flavors change during the canning process."

However, Bon Appétit admitted that the product wasn't meant to be shelf-stable. It went on to delete the video, and issued an apology.

"We know how important it is to show safe food handling for our audiences and realize this wasn't a responsible way of demonstrating the process," the statement reads. "We made a mistake, and we promise to learn from it."

Leone released a similar statement on Instargram: "I apologize and if you did see the recent it's alive episode—please don't water bath your cans. I Apologize again and will do better as a teacher and student of food."

Canning safety was also in the news last summer when Sqirl, a hip Los Angeles café, faced scrutiny after photos were posted online appearing to show a thick layer of mold on top of a bulk container of the restaurant's signature jam. Allegations that employees were simply instructed to scrape the mold off the jam before serving ensued.

"Some users claimed that the entire jam production and storage area was actually an unlicensed food facility that Koslow kept hidden from Department of Public Health inspectors, adding that workers would be 'locked in the dark' inside of the unlicensed area if they were already inside when an inspector showed up unannounced," Farley Elliott, a reporter at Eater Los Angeles, wrote in July.

"We don't use commercial pectin, sweeteners or stabilizers, and to highlight the fruit, we add a little sugar," Koslow wrote on Instagram. "And put simply, a low-sugar jam is more susceptible to the growth of mold. The same types of mold that develop on some cheese, charcuterie, dry aged beef, and lots of other preserved foods."

As the LAist reported, Stephen Wade, a master food preserver, disagreed. If you see mold on your jam, "[it] must be assumed contaminated (unseen spores, release of toxins, secretions into the mix) at all levels, and destroyed," he wrote.

Sorensen doesn't want to dissuade new canners from the activity, but she recommends that they go beyond social media and YouTube videos for their safety information. In the absence of being able to attend classes with a master food preserver or extension agent, she points her students to resources like the U.S. Department of Agriculture's Complete Guide to Home Canning and the Ball Blue Book Guide to Preserving.

She also wants to remind home cooks that there's no rush.

"It's not a competition," she said. "Take it slow, do your research and enjoy what you made safely."