At its heart, Obama and Springsteen's podcast is redefining the toxic masculinity upheld by Trump

In "Renegades: Born in the USA" Obama and the Boss "explore modern manhood" and discuss their lives and influences 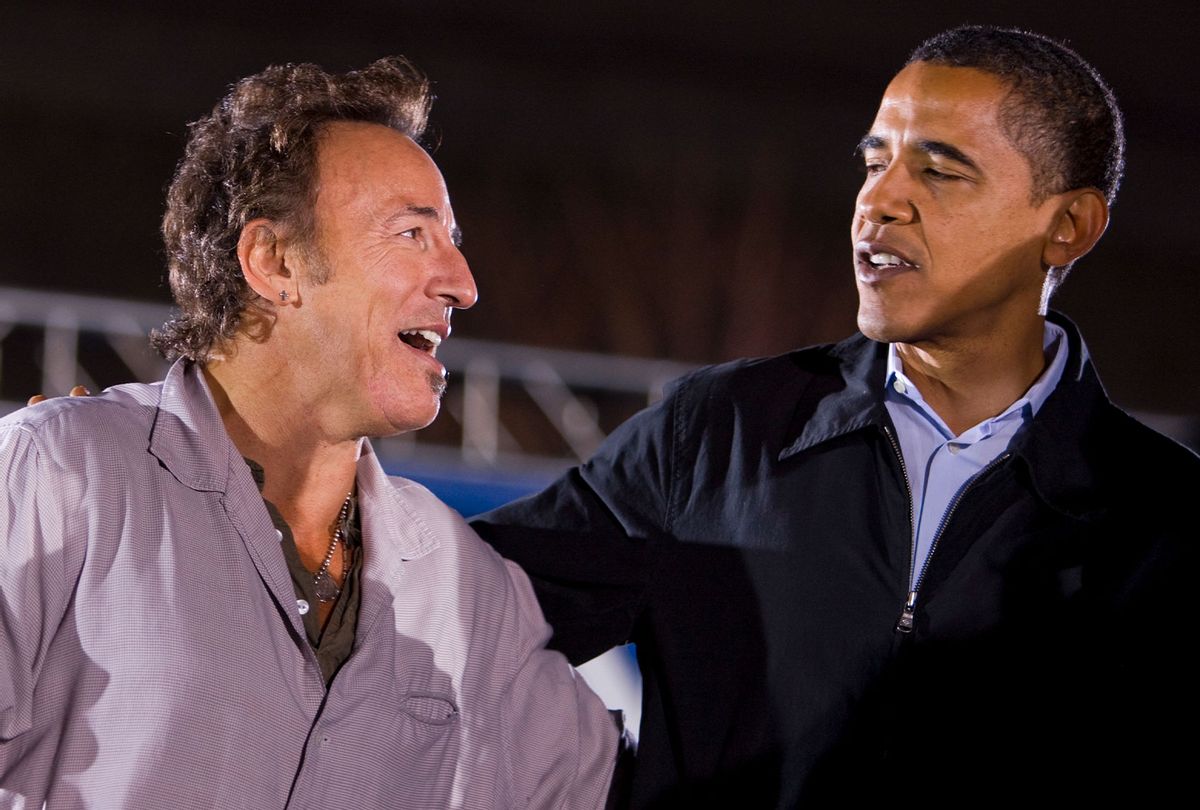 Springsteen and Obama have been friends for over a decade, and the podcast features them, as Spotify put it, "in deep and revealing conversation," which took place in Springsteen's New Jersey recording studio.

"On the surface, Bruce and I don't have a lot in common," Obama said in the introduction to the first episode. "He's a white guy from a small town in Jersey. I'm a Black guy of mixed race born in Hawaii with a childhood that took me around the world. He's a rock n' roll icon. I'm a lawyer and politician — not as cool."

He continued: "But over the years, what we've found is that we've got a shared sensibility. About work, about family and about America."

The first two episodes of "Renegades" are primarily centered on race and racism. Obama talked about feeling like an outsider in Hawaii. Springsteen discussed the racial makeup of Freehold, New Jersey, and integrated neighborhoods. Both talked about the life and legacy of civil rights activist John Lewis.

But a thread that already runs through "Renegades," and is slated to be discussed specifically in a future episode of the podcast, is what modern masculinity can and should look like — a topic that was brought to the cultural forefront throughout Trump's presidency, which was, in many ways, guided by his own pugilistic, narrow definition of manhood.

Take this section from the first episode of the podcast, in which Springsteen and Obama discussed that their wives, Patti Scialfa and Michelle Obama, had hit it off.

"Michelle was very pleased in the insights you had about your failings as a man," Obama said with a laugh. "And after we would leave a dinner, or a party, or a conversation, she'd say, 'You see how Bruce understands his shortcomings and has come to terms with them in a way that you have not? Uh, you should spend some more time with Bruce, because he's put in the work.' So there was also a little of the sense that I needed to be coached in how to be a proper husband."

Springsteen, also laughing, responds: "It's been my pleasure."

Already some key tenets of their shared understanding of masculinity come to light through that simple exchange: respecting your spouse as a partner, being cognizant of and owning up to your limitations, and continuting to work to become a better man and husband, which often means shedding some of the more toxic trappings of American masculinity.

Both men have discussed the concept of toxic masculinity before. During a 2016 interview with NPR's "Fresh Air," Springsteen detailed how he had to shed the idea that there is a singular pathway to being recognized as a man.

"You're young and you're always in pursuit of your young manhood," he said. "You're trying to figure out, what does that mean? There's a lot of pressure on young men to sort that out and we tend to gravitate towards one-dimensional iconography as far as what it means to be a fully grown man."

He also clarified to "Fresh Air" host Terry Gross that his early on-stage persona was just that.

"If you just looked at the outside, it's pretty alpha-male, which is a little ironic, because that was personally never exactly really me," Springsteen said. "I think I created my particular stage persona out of my dad's life and perhaps I even built it to suit him to some degree."

Several years later, during a 2019 conference for his My Brother's Keeper initiative in Oakland, Obama spoke about how racism plays a role in perpetuating toxic masculinity.

"Racism historically in this society sends a message that you are 'less than,'" Obama said. "We feel we have to compensate by exaggerating stereotypical ways men are supposed to act. And that's a trap."

Later in the presentation, he said that "the notion that somehow defining yourself as a man is dependent on, are you able to put somebody else down — able to dominate — that is an old view."

But it's a view that did define Trump's presidency.

From shrugging off his "grab 'em by the pussy" rhetoric as "locker room talk," to talking about his literal testosterone count, to portraying wearing a mask to prevent the spread of the novel coronavirus as a form of weakness — and then allegedly wanting to rip open his shirt to reveal a Superman t-shirt after leaving Walter Reed after he was hospitalized for coronavirus —Trump's form of masculinity was a kind of caricatured machismo.

"Donald's masculinity is a cartoon version of masculinity – it is all bluster," author Tom Digby told Salon in 2020. "Donald is all about bravado; he never demonstrates actual bravery. From his reliance on fake bone spurs to avoid the Vietnam War to his present attempt to escape political defeat by sabotaging the Postal Service, Donald has consistently demonstrated a total absence of courage."

However, as Salon's Matthew Rozsa reported in January, a recent study found that support for a dominating style of masculinity could be used to predict one's love for Trump. "Trump strategically used rhetoric in both his 2016 presidential campaign and during his presidency that evoked elements of hegemonic masculinity and attempted to position him as the 'ideal man," Schermerhorn wrote to Salon at the time.

These limited views on what masculinity entails — stoicism, virility, dominance — can contribute to a fear of social and political movements that would upend current gender, race, and class-based status quos, which can result in aggression and violence. Through this lens, it's not a surprise that Trump's presidency culminated in an attempted insurrection at the United States Capitol.

"Renegades: Born in the USA" promises to be a balm for that. At a time when the country is so fractured, due, in large part, to a president who refused to admit he was wrong, it's refreshing to hear two men — who both represent America in their own ways — enthusiastically discuss overcoming their shortcomings and coming out better on the other side. As Springsteen puts it in the podcast, to change, you've got to forsake ego and "empty out and become a vessel" for empathy.

Episodes of "Renegades: Born in the USA" will be released weekly on Mondays on Spotify.