"This is who Andrew Cuomo is, and anyone who is surprised should start paying attention" 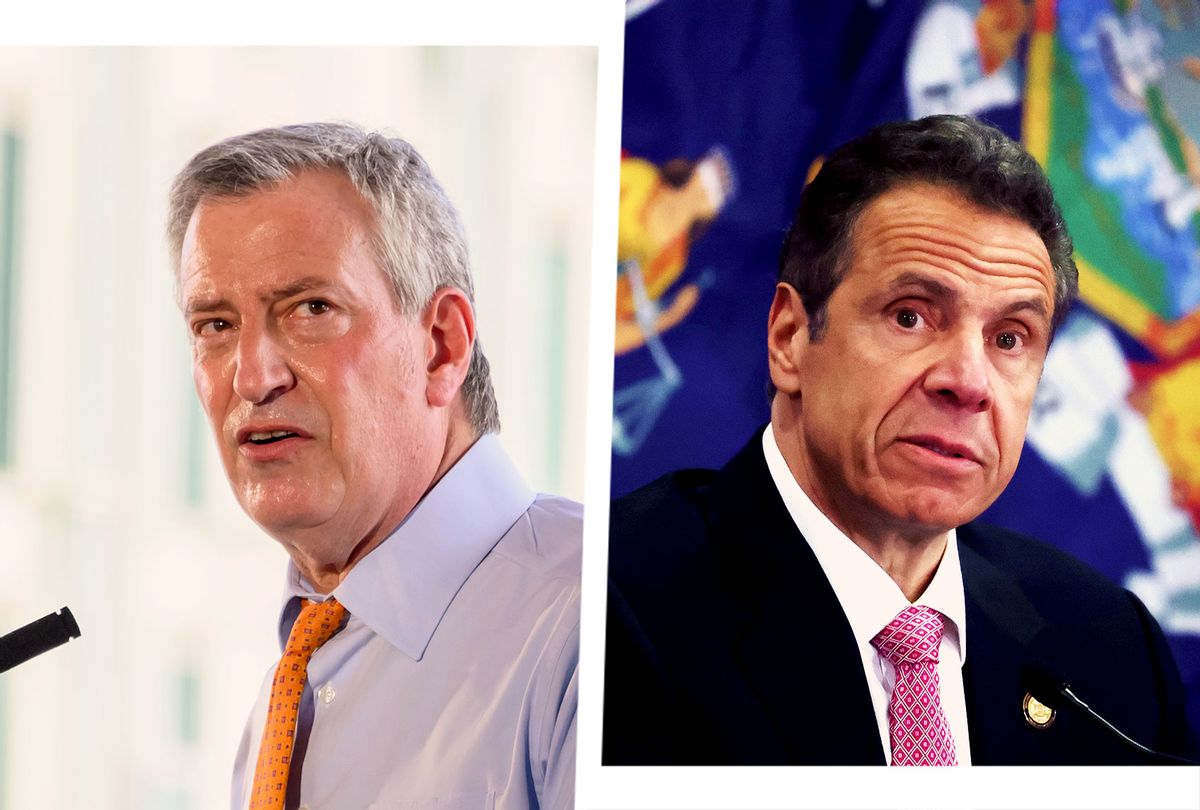 New York City Mayor Bill de Blasio recently made clear he's not all surprised that Gov. Andrew Cuomo is publicly lashing out at—and reportedly threatening to "destroy"—state Assemblyman Ron Kim, one of the few Democratic lawmakers who has been willing to criticize the powerful governor over his disastrous handling of nursing homes during the coronavirus pandemic.

"It's a sad thing to say... but that's classic Andrew Cuomo," de Blasio said in an appearance on MSNBC last week. "A lot of people in New York state have received those phone calls. The bullying is nothing new. I believe Ron Kim, and it's very very sad. No public servant, not person who's telling the truth should be treated that way."

"The threats, the belittling, the demand that someone change their statement right that moment—many, many times I've heard that, and I know a lot of other people in this state have heard that," de Blasio continued.

The mayor's comments came after Cuomo held a press conference last week during which he accused Kim, a Queens representative, of running an unethical and potentially illegal "pay to pay" scheme involving local nail salon owners.

In a statement following Cuomo's public attack, Kim said the governor is attempting to "smear" him to "distract us from his fatally incompetent management."

"But these facts are not going away because they are the facts—unacceptable facts that hold him accountable," Kim added.

The origin of the intensifying public spat between Cuomo and Kim dates back to March of last year, when the New York state health department issued an advisory requiring nursing homes to accept still-recovering Covid-19 patients, despite the risk that they could spread the virus to other vulnerable people in the facilities. While Cuomo effectively rescinded the directive in May amid widespread backlash, critics said the order had deadly consequences for nursing home residents, as Common Dreams reported at the time.

In July, Kim demanded the creation of an independent, bipartisan panel to investigate the Cuomo administration's handling of nursing homes during the coronavirus crisis. The assemblyman also called on the governor to be fully transparent about the coronavirus death toll at New York's nursing homes, which he and other lawmakers believed was being significantly undercounted by the state government.

That suspicion was vindicated last week when Melissa DeRosa, a top Cuomo aide, admitted that the state government intentionally withheld information on the nursing home death count—which is now estimated to be around 15,000—out of fear that the staggering figure would be "used against us" by the Trump Justice Department. Earlier state reports of the death toll didn't include the thousands of nursing home residents who ultimately died at hospitals.

Cuomo rejected allegations of a cover-up, saying after DeRosa's comments were reported that there was simply "a delay in providing the press and the public all that additional information."

"Everyone was busy," the governor said. "We're in the midst of managing a pandemic."

Federal prosecutors with the U.S. attorney's office for the Eastern District of New York are now investigating the Cuomo administration's handling of Covid-19 at nursing homes, the Wall Street Journal reported.

In response to DeRosa's admission, Kim told the New York Post last week that it the Cuomo government appeared to be "trying to dodge having any incriminating evidence that might put the administration or the [Health Department] in further trouble with the Department of Justice."

Kim told the New York Times that hours after his comments to the Post went to press, he received an angry late-night call from Cuomo, who proceeded to yell at Kim for 10 minutes and demand that he walk back his remarks.

"He goes off about how I hadn't seen his wrath and anger, that he would destroy me and he would go out tomorrow and start telling how bad of a person I am and I would be finished and how he had bit his tongue about me for months," Kim said. "This was all yelling. It wasn't a pleasant tone."

Refusing to back down in the face of Cuomo's threats, Kim used his statement Wednesday to slam Cuomo for slipping "legal immunity into our state budget bill for hospital executives and for-profit nursing homes at the request of powerful lobbyists like the Greater New York Hospital Association (GNYHA)—a group that donated $1.25 million towards his campaign."

As The Daily Poster's David Sirota pointed out, "GNYHA said it 'drafted' the provision, which did not merely shield frontline healthcare workers from lawsuits, but also extended such liability protection to top corporate officials who make staffing and safety decisions."

"Critics argued that shielding hospital and nursing home executives from the threat of lawsuits would remove a deterrent to cost-cutting, profit-maximizing decisions that endanger lives," Sirota wrote. "They were ignored."

Kim went on to note that Cuomo's administration "was grossly under-reporting nursing home deaths by as much as 50 percent and withholding information about the situation to federal and state officials—a move that benefited the same healthcare donors helping his campaign over the years."

"As legislators we have a duty to uncover the truth behind the nursing home deaths and the governor's explanations do not add up," Kim said. "While he claims he was taking time to answer the Justice Department, we saw him gallivant around on a book tour and victory lap across prime time cable shows. Again, all while his top aide deliberately hid the information in fear of political and legal consequences."