Republican hypocrisy is not a good reason to support Neera Tanden

For the left, Tanden's "mean tweets" are not the problem. Her long-term crusade to torpedo progressive causes is 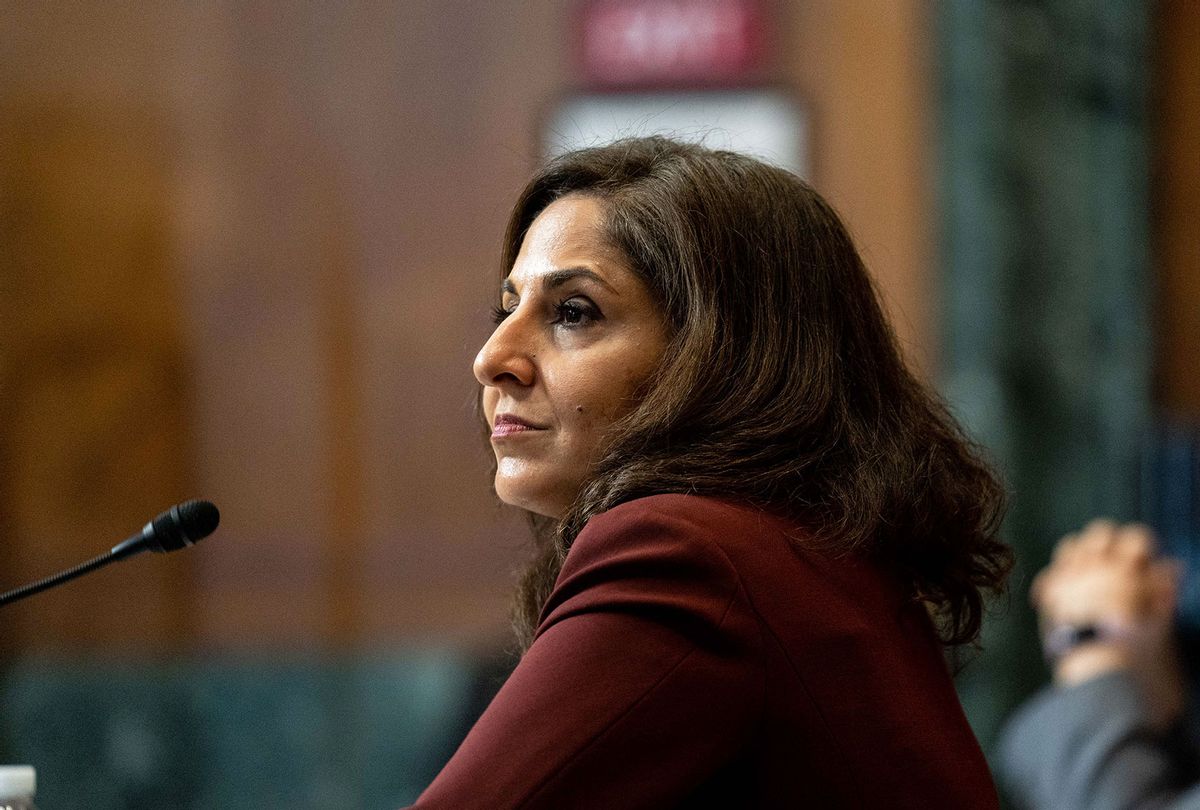 Neera Tanden, nominee for Director of the Office of Management and Budget (OMB), testifies at her confirmation hearing before the Senate Budget Committee on February 10, 2021 at the U.S. Capitol in Washington, DC. Tanden helped found the Center for American Progress, a policy research and advocacy organization and has held senior advisory positions in Democratic politics since the Clinton administration. (Anna Moneymaker-Pool/Getty Images)
--

Most corporate media outlets have depicted President Biden's effort to win Senate confirmation of Neera Tanden as a battle to overcome Republican hypocrisy about her "mean tweets," name-calling and nasty partisanship. But there are very important reasons to prevent Tanden from becoming the Office of Management and Budget director. They have nothing to do with her nasty tweets and everything to do with her political orientation.

Tanden has a record as one of the most anti-progressive operators among Democratic Party movers and shakers. Long enmeshed with corporate elites, she has been vehemently hostile to the Bernie Sanders wing of the party. Progressive activists have ample cause to be alarmed at the prospect of her becoming OMB director — one of the most powerful and consequential positions in the entire executive branch.

Yet some leaders of left-leaning groups have bought into spin that carefully ignores Tanden's fervent embrace of corporate power and touts her as eminently suitable for the OMB job. Media coverage has been a key factor. The newspaper owned by the richest person on the planet, Jeff Bezos, is a good example.

With the Tanden battle intensifying last weekend, the Washington Post launched an opinion spree to defend her while repeatedly expressing alarm and indignation that she might not be confirmed. The day after news broke that Tanden's nomination was in serious trouble, the newspaper's barrage started with a piece by right-wing pundit Hugh Hewitt, who urged Senate Republicans "to forgive the small stuff and encourage the recruitment of talent." That was on Saturday.

On Monday, the Post's editorial board weighed in, proclaiming the newspaper's official position: "Yes, Ms. Tanden has been undiplomatic," but hypocritical GOP senators had approved Donald Trump's nominees who were even nastier, and the Senate should confirm her.

By then, the national media mold was set, and countless words quickly poured into it — including six more pro-Tanden pieces that the Post published in the next two days. On Tuesday, the Tanden defenders were staff columnists Greg Sargent and Karen Tumulty as well as the paper's chief political correspondent Dan Balz. On Wednesday, staff columnists Dana Milbank and Jennifer Rubin shared the polemical duties with feminist author Jill Filipovic.

The Post's writers denounced conservative objections to confirming Tanden as director of OMB, which the newspaper has aptly described as "the nerve center of the federal government." Meanwhile, there was no space for substantive criticism of Tanden; the paper's opinion section didn't offer a pixel with a contrary outlook, let alone a progressive critique.

Much of the left has a strong aversion to Tanden. Days ago, Common Dreams reported on "her history of pushing cuts to Social Security, disparaging Medicare for All and other popular ideas, and raising money from massive corporations." As president of the Center for American Progress, she sought and received between $1.5 million and $3 million in donations from the United Arab Emirates monarchy; later, CAP remained silent about a bipartisan congressional resolution to end the U.S. government's assistance to the continual Saudi-UAE warfare killing huge numbers of Yemeni civilians.

But some progressive organizations have voiced support for Tanden's nomination, turning a blind eye to such matters as her close fundraising ties with corporate elites, Big Tech, Wall Street, Walmart, health insurers and military contractor Northrop Grumman. Yet ties like that would create foreseeable conflicts of interest in the top OMB job, which oversees regulatory processes across the federal government.

Such concerns went unmentioned Thursday afternoon when the liberal group MoveOn emailed an action alert to its big list, promoting a petition to senators that urges them to "stop holding up the nomination of Neera Tanden." The organization's email offered nothing but the official line coming from the White House, reflecting an eagerness to serve the Democratic administration more than progressive principles.

It was not a good sign when a usually-laudable progressive organizer told CNN viewers that Tanden should be confirmed. And given Tanden's record of opposing Medicare for All, opposing a $15 federal minimum wage and advocating for collaboration with Republican leaders in potential cuts to Social Security, Medicare and Medicaid, something is seriously amiss when a leading advocate for women's health rights urges confirmation.

In a tweet last week, NARAL president Ilyse Hogue called Tanden "a committed progressive" and added: "How about assessing her work, competence and vision instead of the tone of her tweets? Stop sinking good women because they are outspoken."

Oddly, the director of the excellent Revolving Door Project, Jeff Hauser, publicly defended Tanden days ago, telling the New York Times: "The last decade has seen mediocre or worse cabinet appointments rubber-stamped by the Senate with regularity. It is unconscionable that the rare exception to that norm might be based on feelings hurt by imprudent tweets and suggests that senators vote more on egos than substance."

I contacted Hauser for clarification, since it seemed that he was using the hypocrisy of Senate Republicans to justify support for Tanden's nomination. In effect, he appeared to be adding some drops of WD-40 to hinges on the particular revolving door that Tanden is trying to move through.

When I asked Hauser if he supported confirmation of Tanden and whether he considered her to be part of the revolving-door phenomenon, he replied: "We oppose the arguments actually endangering her confirmation, which are from [Sen. Joe] Manchin and [Sen. Susan] Collins and the like, and hold that it makes no sense to confirm the likes of Richard Grenell and Brett Kavanaugh but not Neera Tanden. But we do not lobby, so we do not formally urge votes one way or another once a person is actually nominated for a job."

Hauser added: "I don't think Tanden is 'revolving door,' but I stand by the concerns I raised about CAP fundraising in the Washington Post." Ironically, the Post news article that Hauser was citing, published in December 2020, scrutinized Tanden's longtime corporate entanglements via her Center for American Progress and reported: "Founded in 2003 by allies of Bill and Hillary Clinton, CAP is widely viewed as a Democratic administration-in-waiting, with a revolving door between the think tank and the White House."

At RootsAction, which has been working to defeat Neera Tanden's nomination, my colleague Jeff Cohen has a very different perspective than what can be heard from Tanden's enablers: "We've opposed Tanden not because of her 'mean tweets' but because of her close funding relationships with corporate titans and foreign governments. What's stunning is the silence from Senate Democrats about the potential conflicts of interest raised by her decade of aggressive fundraising from powerful interests."

That kind of silence, whether from the U.S. Senate or from big-budget progressive groups, could help the Biden administration to do its worst instead of its potential best.