Why chefs are reaching for Japanese mayo (and you should be, too)

“The acid is a bit higher, it’s a little sweeter and the umami content is a little stronger, as well" 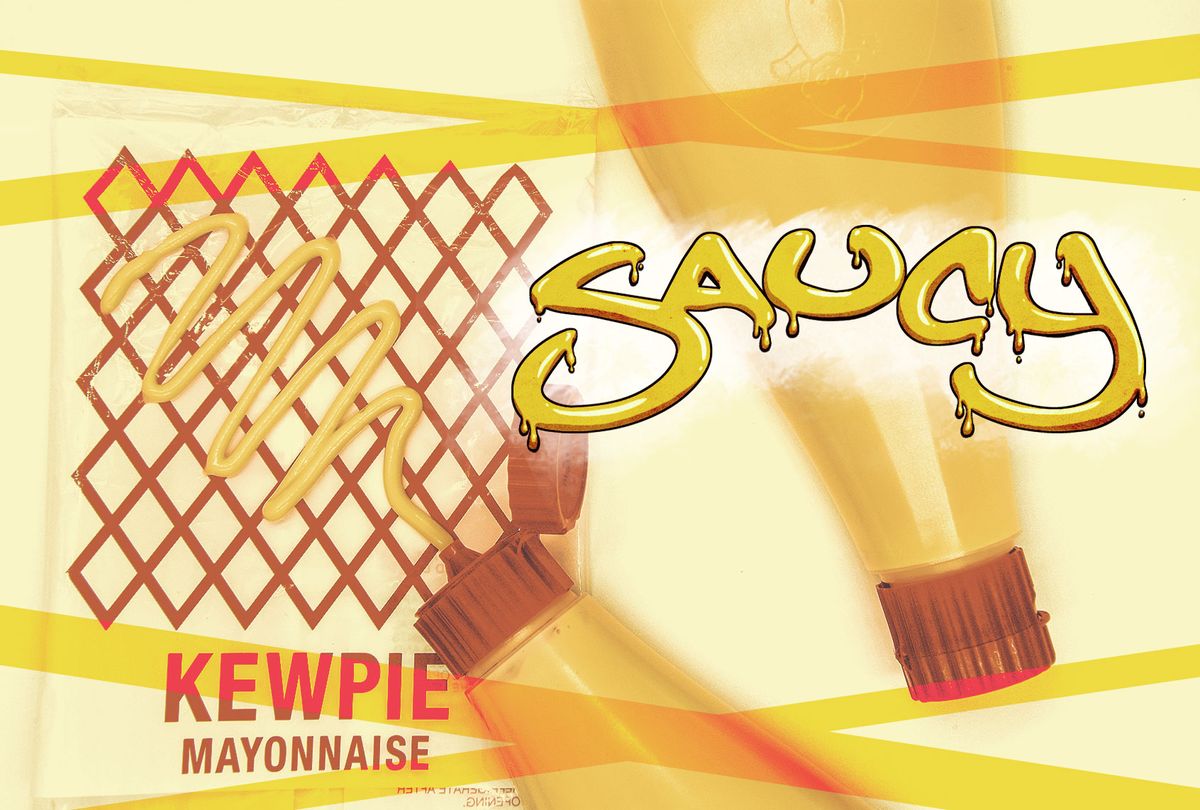 What is Japanese mayo?

Unlike its American counterpart, Japanese mayo is made using just egg yolks, compared to the entire egg. Add a splash of rice vinegar and a hit of umami flavor, and you end up with one of the most craveable condiments on the planet. Kewpie is the original and best-known producer of Japanese mayo.

Why chefs are reaching for Japanese mayo (and you should be, too)

Chicago chef Mari Katsumura jokes that, as a Japanese-American, she keeps a pretty heavy stockpile of Kewpie mayo in her home kitchen. If she runs out? "Oh, my mom always has like five backup bottles, so I can just run and grab one from her house."

Katsumura, who owns the Michelen-starred restaurant Yugen, describes the Japanese mayonnaise as being more "assertive" than many American brands. It typically only contains egg yolks, giving it a more custardy consistency when compared to American mayonnaise, which contains both the yolk and the whites. It's also usually made with rice vinegar, as opposed to the distilled vinegar common in many vinegar recipes.

Oh, and David Chang, the founder of the Momofuku empire, said in 2015, "[It's] the best mayonnaise in the world because it has MSG." (It should be noted that the American formulation of Kewpie does leave out the monosodium glutamate due to Americans' largely unfounded fears about the additive.)

At her restaurant, Katsumura and her staff make it from scratch, but Kewpie is the most popular brand of Japanese mayonnaise in the world.

Kewpie mayonnaise was invented in 1924 by Toichiro Nakashima, who had first encountered mayonnaise while spending about three years in the U.K. and U.S. as an overseas intern of the then Japan Department of Agriculture and Commerce. According to the Kewpie Corporation's history, "Nakashima saw its way of life changing, one example being the Westernization of female students' clothes [and] he sensed that change would come to the Japanese diet, as well."

He decided to create a "highly nutritious mayonnaise made using only egg yolks" that could be used as an accompaniment for vegetables. Like all mayonnaise, it's made through magical art of emulsification. Vinegar and egg yolks — which contain the emulsifier lecithin — are rapidly whisked together. Then oil is added, drop by drop, as the entire mixture begins to thicken and take on a slightly golden, glossy sheen.

Nakashima had a product, but he needed a name. After some deliberation, he settled on "Kewpie," which was a brand of cupid-esque dolls and figurines that were originally conceived as comic strip characters by Missouri cartoonist Rose O'Neill in 1909. According to the State Historical Society of Missouri, O'Neill described the characters as "a sort of little round fairy whose one idea is to teach people to be merry and kind at the same time."

Details on where Nakashima first encountered the "Kewpie babies" is fuzzy. It's likely that he at least saw them while living in the U.S., as both Kewpie paper dolls and bisque figurines were popular at the time, and a variety of O'Neill's characters were used in advertisements for companies like Jell-O, Colgate, Kellogg's Corn Flakes and Sears. It's also possible he first encountered them closer to home. In the mid-1920s, celluloid versions of Kewpies, which were smaller and cheaper than their ceramic counterparts, began to be manufactured in Japan.

Regardless, Kewpies were internationally ubiquitous at the time Nakashima launched his mayonnaise, and he decided to lift the name and logo.

That decision wasn't without controversy. According to a 1998 Associated Press report, Kazuo Kitagawa, who acquired the Kewpie doll's Japanese copyright in May from the Missouri-based Rose O'Neill Foundation, demanded $7 million in damages from the Kewpie Corporation (or Q.P. Corp). Kitagawa, who ran a doll museum and toy shop in Japan, said at the time that he was "only trying to do right by Kewpie," and his lawyer said that their aim was "to promote the true Kewpie."

In response, Q.P.'s spokesman Masafumi Taga said the company had the legal right to the Kewpie figure, citing a then-73-year old trademark granted in Japan.

"All Kewpies are not the same. There are many Kewpies," Taga said. "Kewpies are in the public domain."

The courts agreed, and the little baby-face mascot still graces the company's tube bottle with its signature red cap — and just as the Kewpie figurines were once internationally ubiquitous, Kewpie mayonnaise has become a global sensation. In 2020, Kewpie reported annual consolidated net sales of 531,103 million yen (or just more than $5 billion).

According to Katsumura, it's still very much a staple in Japanese cuisine. Kewpie-themed cafés occasionally pop up across the country, and in Tokyo, visitors can spend the day at MayoTerrace, a museum dedicated to the condiment.

"It's pretty prevalent all across the board," she said. "It's notoriously used for the egg salad sandwiches that you find in convenience stores everywhere in Japan. It's also a topping for okonomiyaki, the Japanese pancakes, and it's a topping for takoyaki, which are those little octopus balls that are common in Osaka. So it's a pretty versatile product."

But over the last decade, Kewpie has found a bunch of fans stateside.

It's become a darling of food professionals. As Food & Wine reported in 2015, Chef Dino Tsaknis of Chicago's Primehouse has sung Kewpie's praises, while Jason Halverson of San Francisco's Stones Throw has said that "Kewpie Mayonnaise is like mayo on crack." Halverson uses it in everything from coleslaws to sandwiches and sauces, he said.

And it's well-loved by food-lovers who just want a yolkier, more savory mayonnaise. As a result, floating around on the internet right now are how-tos for Kewpie Halloween costumes, Kewpie-themed stud earrings for sale on Etsy, and posts from people lusting after elusive articles of clothing from the Uniqlo/Kewpie collaboration.

How should I use Kewpie mayo at home?

As Katsumura said, Kewpie is pretty versatile. It can go anywhere you put regular mayonnaise, but one of my favorite ways to utilize it at home is in Japanese-style egg salad sandwiches. Katsumura also does this at Yugen.

It's a really simple dish, made better by better-than-basic ingredients: spongy Japanese milk bread, organic eggs (if you can find them), and of course, Kewpie mayo. It's not necessarily traditional, but I occasionally like to add whatever finely chopped herbs I have on hand — flat-leaf parsley, chives, scallions — to the mix. Dill is always a good choice.

1. Place the hard-boiled eggs and Kewpie mayo into a food processor. Pulse until combined; the mixture should still have some texture, but it should be closer to a paste. Season with salt and pepper and herbs, if desired.

2. Spread the egg salad on the bread, and enjoy it.

Obviously, if you want to eat Kewpie mayo . . . you should buy Kewpie mayo. However, there are several other really delicious Japanese mayos on the market that you can use to pep up home cooking.

You can also make homemade Japanese-style mayo at home. I played with a few versions before settling on this ratio. (But I've got to be honest: I typically just reach for the Kewpie sitting in my refrigerator.)

1. In a food processor, or a large bowl using an immersion blender, combine the egg yolk and mustard and process for 20 seconds.

2. Slowly drizzle about 1/4 cup of oil into the mixture while continuously blending. The mixture should begin to thicken and emulsify.

3. Add the salt, sugar and MSG/dashi/umami powder, then continue to blend the mayo, slowly drizzling another 1/4 cup of oil into the mixture.

4. Finally, add the rice vinegar, and drizzle the remaining oil to the mayo, all while blending continuously.

5. Test the mayo, and adjust the salt to your liking. The mayo can be stored in the fridge in an airtight container for up to one week.