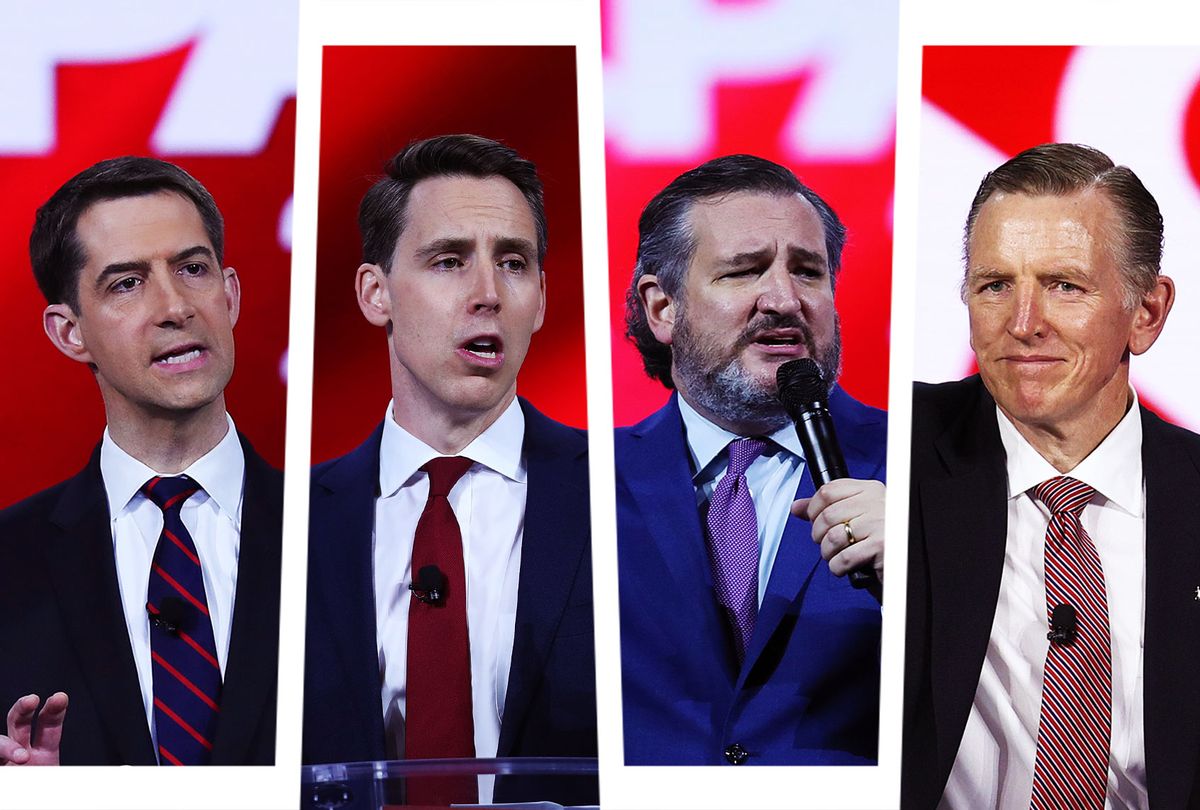 If you want a perfect emblem of the current state of Republican politics, look to the story of how Rep. Paul Gosar, R-Ariz., spent this past weekend.

On Friday night, Gosar attended a conference for unvarnished fascists, where the main organizer gave a speech calling for America to be white nationalist country and openly celebrated the insurrection spearheaded by Donald Trump on Jan. 6. On Saturday, while speaking at the Conservative Political Action Conference (CPAC), Gosar lamely claimed to denounce "white racism," clearly feeling that those magic words erased his participation in and support for those who are organizing white racists to take over the country through force.

It should be silly that Gosar believes that simply declaring "I denounce" is enough to negate all his concrete actions in favor of white nationalism, but the sad fact is that he has good reason to think it will work. After all, that's how things have been working for years in this country. Call it the fascism two-step: First, Republicans do something overtly fascist. Then they wave off concerns about their fascism by faking umbrage and relying on the widespread belief that "it can never happen here" to paint their critics as hysterical. Gosar was just a particularly blunt and obvious example, but it's the strategy that's been used throughout Trump's presidency and now is being heavily employed to minimize the attempted insurrection.

Much was written, both on social and plain old regular media, about how CPAC this year was cementing Trump's power over the GOP and turning the party into a cult of personality for their orange-hued buffoon of a leader. Indeed, it's both alarming and darkly funny, from the rapturous reception of his predictably whiny stemwinder to the ridiculous gold statue of Trump that was on display, which drew thousands of jokes about golden calves. But really, the Trump worship is only part of what is the bigger and much scarier story of CPAC.

The conference was geared around the task of completing the transformation of the Republican party into an overtly authoritarian — even fascist — party that is focused on seizing and holding power against the will of the American people. The Trump idolatry is part of that — what's a fascist party without a cult around a narcissistic leader? — but ultimately, Trump still functions as he always has, which is as a tool for his followers to get what they want, and not an ends in himself. And what they want, as CPAC made quite clear, is to make the U.S. a white nationalist country, which is always what the "MAGA" slogan stood for.

The CPAC straw poll showed only 55% of attendees endorsed Trump as their favorite for the Republican presidential nominee. However, a full 97% approved of Trump's performance in office, despite him ending his presidency by launching a coup that ended in a bloody attack on the Capitol. Trump himself they can leave or take. But the insurrection and the violent assault on American democracy? That is what the CPAC crowd is all about.

As Heather "Digby" Parton noted at Salon Monday morning, "Trump went out of his way to cancel a whole lot of Republicans he considers disloyal, promising to do everything in his power to 'get rid of 'em all,'" and then proceeded to name "every single GOP politician who voted for impeachment individually, his voice dripping with venom."

This is a result, of course, of Trump's famous narcissism and his obsessive cataloging of his enemies. But it is also, and more importantly, about something else: Purging the party of anyone who isn't on board with a fascist agenda. The targets of Trump's wrath are the only Republicans who drew the line at a violent attempt to overthrow the government. This isn't about just remaking the party in his own image, but remaking they party as one explicitly supportive of violent insurrections. Frankly, it won't be a hard task, since, as his pathetically short list showed, few Republicans were even interested in opposing his coup in the first place.

CPAC's anti-democratic agenda was made clear by all the non-Trump programming of the conference. Multiple panels and individual speakers hyped Trump's lies about how he is the "real" winner of the election, less out of mindless Trump worship and more because those lies fit their larger agenda: Denying the legitimacy of Democratic voters, especially voters of color. The subtext was made textual but Sen. Josh Hawley of Missouri, who gave a speech explicitly declaring: "We can have a republic where the people rule or we can have an oligarchy where Big Tech and the liberals rule."

Hawley's a formulation that puts liberals outside of the category of "the people." As Philip Bump of the Washington Post wrote, "The reason 'the liberals' have power in Washington at the moment is that more Americans voted for Democrats in the 2020 election" and Hawley's dichotomy suggests "liberals aren't Americans who have a voice in government."

The "liberals aren't legitimate Americans" notion was baked directly into Trump's coup efforts, which — until the Captiol riot, anyway — were largely focused on throwing out the votes in big, liberal cities, by declaring these votes "corrupt" and "fake". No evidence of illegal voting either was introduced nor was it needed. For Trump voters, the fact that these voters are racially diverse and prefer Democrats inherently renders their votes illegitimate.

On top of the anti-democracy rhetoric, CPAC was heavy on another major feature of fascism: An eagerness to use violence, especially against racial minorities, to stifle political opposition.

Sen. Tom Cotton of Arkansas, for instance, defended his "very simple message" from a notorious 2020 New York Times op-ed. In it, he lied about Black Lives Matter protests, characterizing them as "riots" when the vast majority were peaceful and used these lies as a pretext to demand martial law and the use of violence to put down protests. Sen. Ted Cruz of Texas also pushed the violent fantasies of putting down Black Lives Matter protesters by declaring, "In Houston where I live, I have to tell you, there weren't any rioters because let's be very clear, if there had been, they would discover what the state of Texas thinks about the 2nd amendment right to keep and bear arms."

In reality, the reason there weren't any riots was that violence was quite rare at Black Lives Matter protests generally. Rigorous analysis from the fall shows that 93% of the protests nationwide were peaceful and, furthermore, most of the violence was directed against the protesters, and not caused by them. For instance, in Washington D.C., Trump set law enforcement to tear gas a peaceful crowd of protesters in Lafayette Park. In Philadelphia, police gassed a group of peaceful protesters, who were trapped by a fence. Houston's lack of violence probably has more to do with the surprisingly progressive police chief who chose to march with the protesters over assaulting them.

But these facts don't matter. The point is putting up a thin pretext of concern about largely non-existent "riots" to excuse what these speakers and their audience really wants: To use violence to silence political protest. And at a conference that was organized around feigned concern for "free speech", no less.

There were innumerable more examples. I was particularly struck by Sen. Marsha Blackburn of Tennessee expressing outrage that anyone would dare "fact-check" Trump, a distillation of the authoritarian belief that "truth" is what Dear Leader says it is, actual facts be damned.

But overall, the picture painted at CPAC was clear, even before Trump set foot on the stage. This crowd is blatantly fascist. They oppose any democracy that includes people of color as equals, believe the "winner" of an election is the guy who got the most white voters and wallow in fantasies of violently suppressing Black protesters. And they are remaking the GOP in their image, whether they use Trump or some other repulsive figure as their figurehead to do it.