After Tom Cotton's "Send in the troops" op-ed, NYT staff stages a rebellion 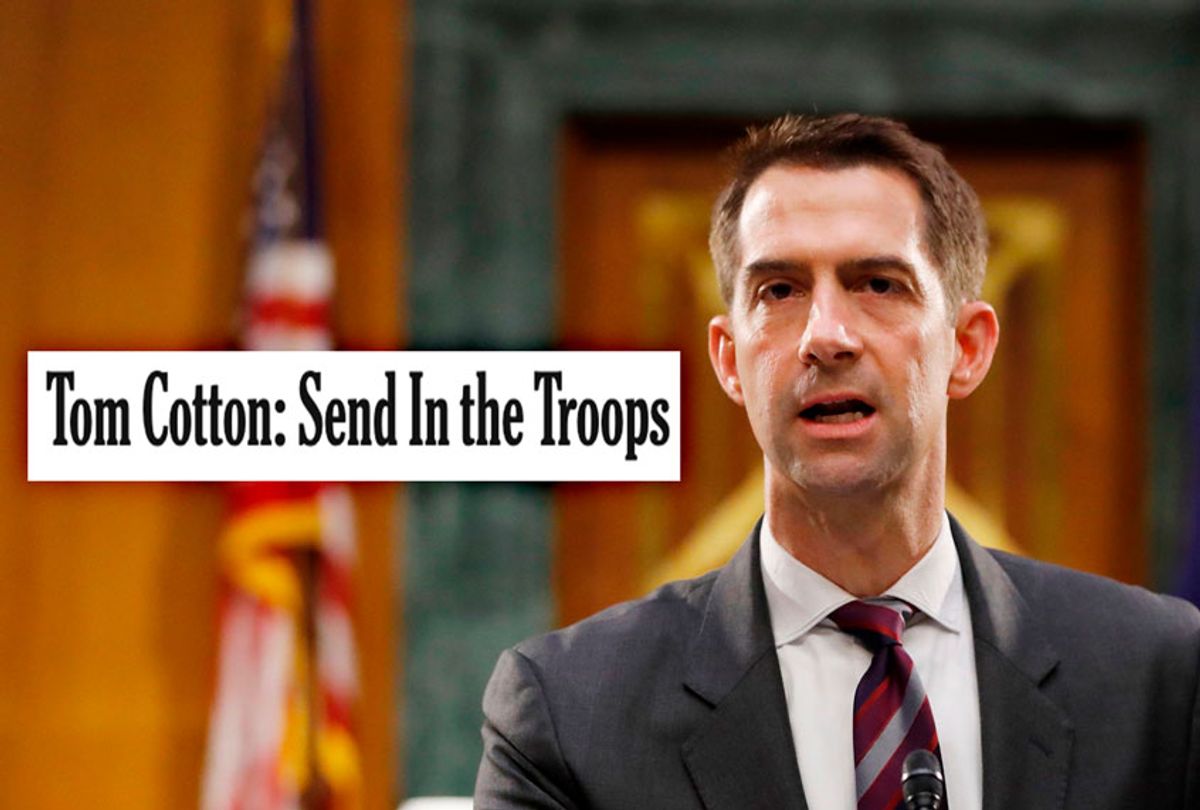 The New York Times' decision on Wednesday to publish an op-ed by Sen. Tom Cotton — in which the Arkansas Republican called for the federal government to "Send in the Troops" to forcibly subdue the "rioters" who he claimed have "plunged many American cities into anarchy" — resulted in a remarkable public denunciation from readers and even the newspaper's own staff members.

Dozens of Times staffers risked the ire of Times management by tweeting the singular message: "Running this puts black @nytimes staff in danger."

The NewsGuild of New York, which represents many Times journalists, released a statement declaring, "This is a particularly vulnerable moment in American history. Cotton's Op-Ed pours gasoline on the fire."

The statement explained: "Though we understand the Op-Ed desk's responsibility to publish a diverse array of opinions, we find the publication of this essay to be an irresponsible choice. Its lack of context, inadequate vetting by editorial management, spread of misinformation, and the timing of its call to arms gravely undermine the work we do every day. This rhetoric could inspire further use of force at protests — protests many of us and our colleagues are covering in person."

On Thursday evening, the Times capitulated — up to a point. Eileen Murphy, a Times spokeswoman, said in a statement that "a rushed editorial process led to the publication of an Op-Ed that did not meet our standards." The statement said the Times would expand its fact-checking operation and publish fewer pieces.

But that didn't actually resolve a lot of the issues that the Cotton op-ed raised. What standards did it fail to meet? What are we to make of the two spirited defenses of the decision to publish it — from Times publisher A.G. Sulzberger and editorial page editor James Bennet, no less? Are those no longer operative? What's the lesson learned?

The lesson I hope the paper's editors and management learned is that when the Times publishes op-eds, it is making a conscious choice to amplify them. It is putting the Times imprimatur on the authors and their views. And that can be a hugely consequential decision.

The publisher steps in it

Sulzberger, the publisher, initially defended the publication of the Cotton op-ed in a message to staff on Thursday, writing: "I believe in the principle of openness to a range of opinions, even those we may disagree with, and this piece was published in that spirit. "

But he also wrote: "We don't publish just any argument — they need to be accurate, good faith explorations of the issues of the day."

And that's where I think he tripped himself up. Because by publishing the op-ed, the Times was vouching for its accuracy and its good faith, and was validating its topic as a legitimate topic worthy of serious debate.

The op-ed, in reality, was riddled with inaccuracies, conflations and conspiracy theories. And it was inflammatory to its core — hardly a subject of reasonable political discourse.

Times investigative reporter Jennifer Valentino-DeVries, using the Times's own ad slogan as a thematic device, posted a series of tweets that amounted to a devastating fact-check on Cotton's piece:

Cotton wrote of "cadres of left-wing radicals like antifa infiltrating protest marches to exploit Floyd's death for their own anarchic purposes." Valentino-DeVries pointed out that the Times itself has reported that unsubstantiated theories about antifa are among the primary pieces of misinformation being spread about current protests and unrest.

Rather than a reasoned argument, Cotton's op-ed was a self-serving embrace of the kind of authoritarianism that used to be unthinkable in this country. Political analyst Jared Yates Sexton tweeted:

Sewell Chan, a former deputy editor of the New York Times op-ed page (he is now editorial page editor at the Los Angeles Times) explained on Twitter that he wouldn't have run the Cotton piece, which he noted "isn't original, or even timely."

Coming at a time when the vulnerability to violence of black and brown bodies is being felt so acutely, especially by black and brown people, Cotton's op-ed struck some as particularly threatening and hostile. Karen Attiah, an opinion editor at the Washington Post, tweeted:

Bennet, the editorial page editor, also initially defended his decision on Wednesday, with a number of unctuous straw-man arguments. For instance, he wrote: "It would undermine the integrity and independence of The New York Times if we only published views that editors like me agreed with, and it would betray what I think of as our fundamental purpose — not to tell you what to think, but to help you think for yourself." Ick.

His response to the concern that the Times legitimated Cotton's point of view was this: "I worry we'd be misleading our readers if we concluded that by ignoring Cotton's argument we would diminish it." Huh?

Bennet even suggested that the Times performed some sort of public service by having Cotton expand his tweets into a full op-ed: "[H]aving to stand up an argument in an essay is very different than making a point in a tweet," Bennet wrote. "Readers who might be inclined to oppose Cotton's position need to be fully aware of it, and reckon with it, if they hope to defeat it."

The op-ed, in reality, was cotton candy compared to Cotton's original tweets, which were widely interpreted as a call for the military invasion of cities and the summary execution of American citizens.

Did someone at the Times really look at those tweets and say: "Hey, let's hit him up for an op-ed?"

Bennet reportedly told colleagues later on Thursday that he had not read the Cotton op-ed before publication.  But he still bears the responsibility. His staff does what he wants them to do. And he initially defended the decision, even if he has now backed down.

The wrong men at the wrong time

At a time when the video of a police officer snuffing out George Floyd's life, the massive surge of impassioned protests and the violent suppression of so many of those protests have profoundly shaken the public — including many journalists — why would anyone even consider publishing a fanatical incitement to more pain and violence?

I actually have an answer of sorts. Although I've been watching Dean Baquet, the Times's top news editor, more closely than I've been watching Bennet, the two men seem to have an awful lot in common (which may be why Bennet is often considered Baquet's most likely successor).

To be blunt, one of the things they have in common is precisely what I think makes them entirely unsuited for their jobs in this day and age: a sense of moral and emotional detachment from the news at a time when democratic values are being challenged, when the very notion of truth is under attack and, now, when the ugly, festering wound of racism and police violence has once again been exposed.

Their mantra is: Don't take sides. In Bennet's case, that means publishing a range of often inaccurate, bad-faith arguments from the right, in an effort to counter the centrist and liberal voices that dominate his pages.

In Baquet's case, that means doing terrible things to the Times' political coverage: normalizing Trump, engaging in false equivalence, being overly credulous to official sources and generally preventing capable reporters from calling it like they see it.

He has made it clear that Times political reporters will not be "taking sides" — even when one side is the truth and the other side is a lie — as long as he remains editor.

But what I believe critics of the decision to publish Cotton's op-ed are saying – and what Times staffers themselves have said — is that, yes, sometimes you do take sides. That doesn't mean you become a partisan. It means you recognize that a lie is a lie. And you recognize that some ideas – like advocating the violent suppression of what would almost inevitably be mostly black and brown people — are so abhorrent, so unhinged, so dangerous and so consequential that it is irresponsible just to put them out there without contextualizing them, explaining them and fully refuting them.