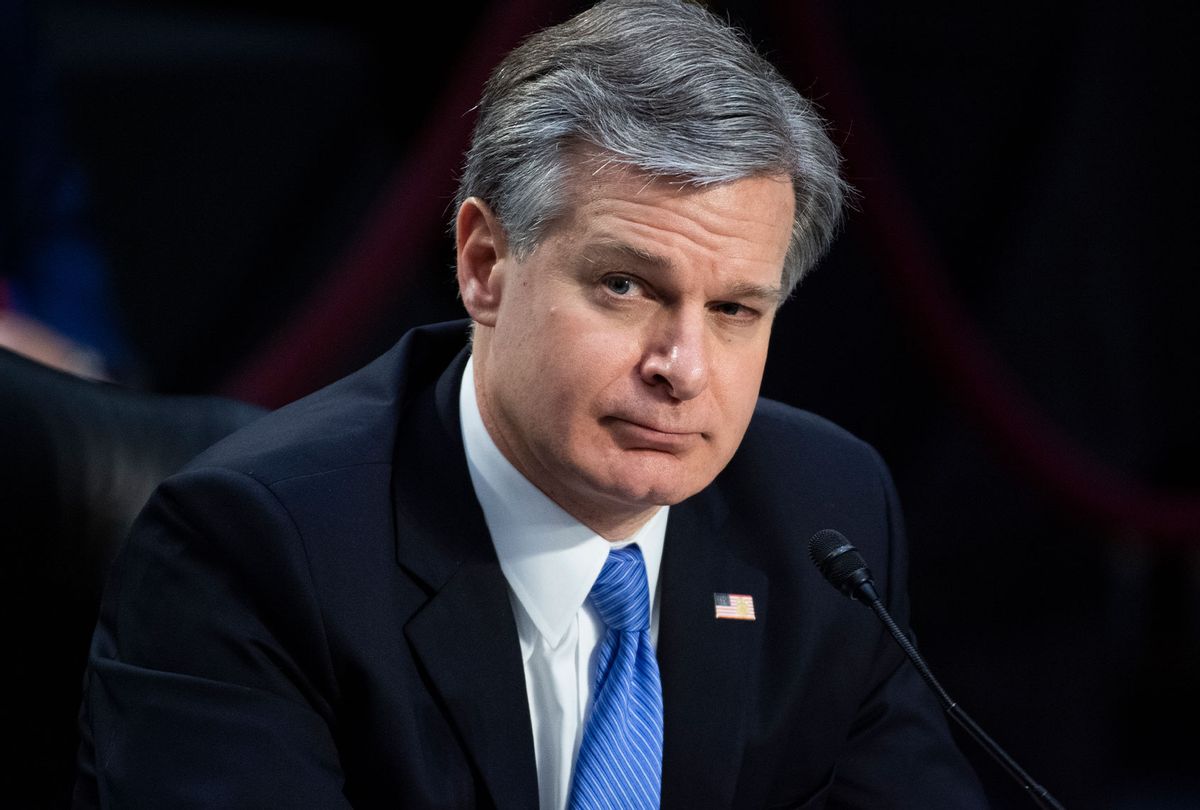 FBI Director Christopher Wray didn't mince words on Tuesday during his congressional testimony: The Jan. 6 attack on the very building he was sitting in was an act of "domestic terrorism," and those who carried it out were in no way "fake Trump supporters."

"We have not, to date, seen any evidence of anarchist violent extremists or people subscribing to antifa in connection with the 6th," Wray testified before the Senate Judiciary Committee, which was examining the bureau's response to the insurrection. He labeled white supremacy a "persistent evolving threat" and "the biggest chunk of our domestic terrorism portfolio."

While he was careful not to directly blame the former commander in chief for inciting the deadly insurrection, Wray put to bed the conspiracy peddled by conservatives and Trump loyalists that the rioters were disguised antifa anarchists — or so it seemed.

Even as the Capitol attack remains in the limelight, some Republicans appeared interested in attempting to draw comparisons between seemingly unrelated events: an insurrection attempting to overthrow democracy based on lies that the 2020 election was stolen and the protests against racial injustice last summer sparked by the killing of an unarmed Black man, which in a few cases turned violent.

Sen. Chuck Grassley, R-Iowa, the panel's top Republican, spent a considerable amount of his time addressing and inquiring about antifa and left-wing anarchists.

"We're not serious about tackling domestic extremism," Grassley said, "if we tolerate mobs that attack some police officers but not all police officers … if we care about some government buildings being attacked but not others … [and] if we only focus on white supremacy movements, which isn't the only ideology that's responsible for murders."

At one point, Sen. John Cornyn, R-Texas, suggested that a certain "narrative" had been created about the insurrection and that some people — without mentioning names — were now "try[ing] to search for facts that might bolster that narrative."

"I've heard the expression that here in Washington, whoever has the best narrative wins," Cornyn said. "But, as you said, the fact is these extremist groups are not monolithic."

Sen. Ted Cruz, R-Texas, who has faced criticism for his role in helping former President Trump try to overturn the election, homed in on how the FBI has responding to what he called the summer's "ongoing pattern of domestic terrorism."

Questions have swirled around the delay in deploying the National Guard to the Capitol to assist local officers. Plenty of blame has gone around, too. But that issue has now become politicized in narrow partisan terms, based on a debunked conspiracy pushed by some Republicans that House Speaker Nancy Pelosi was somehow responsible.

Prompted by several GOP senators about the sluggish response of federal troops, Wray declined to weigh in, noting that he has no authority over such matters. But in his line of questioning about the topic, Sen. John Kennedy, R-La., promoted the false notion that Washington, D.C., Mayor Muriel Bowser had the ability to call for the National Guard. That power is reserved for governors, with the president controlling any troop response within the nation's capital — another reason why advocates say the District of Columbia should become the country's 51st state.

At times, the hearing was contentious. Wray faced a bipartisan shellacking over what lawmakers from both parties have said was a failure in intelligence gathering to properly prepare and warn Capitol security officials of the potential violence. He adamantly defended the bureau, stating that it had been difficult to determine the seriousness of the online chatter consisting largely of unverified threats, but that Capitol officials were offered warnings through several communication channels.

Although several Republicans sought to shift the focus toward antifa or left-wing extremists from events last summer, none appeared willing to go quite as far as Sen. Ron Johnson, R-Wis. Last week, Johnson pushed the debunked conspiracy theory during a congressional hearing featuring former top Capitol security officials, suggesting that "provocateurs" and "fake Trump supporters" had stormed the Capitol — rather than the ex-president's loyalists who had heard his speech at a nearby rally just hours earlier.