Being an overbearing creep falls short of sexual harassment, but more social opprobrium would help stop the louts 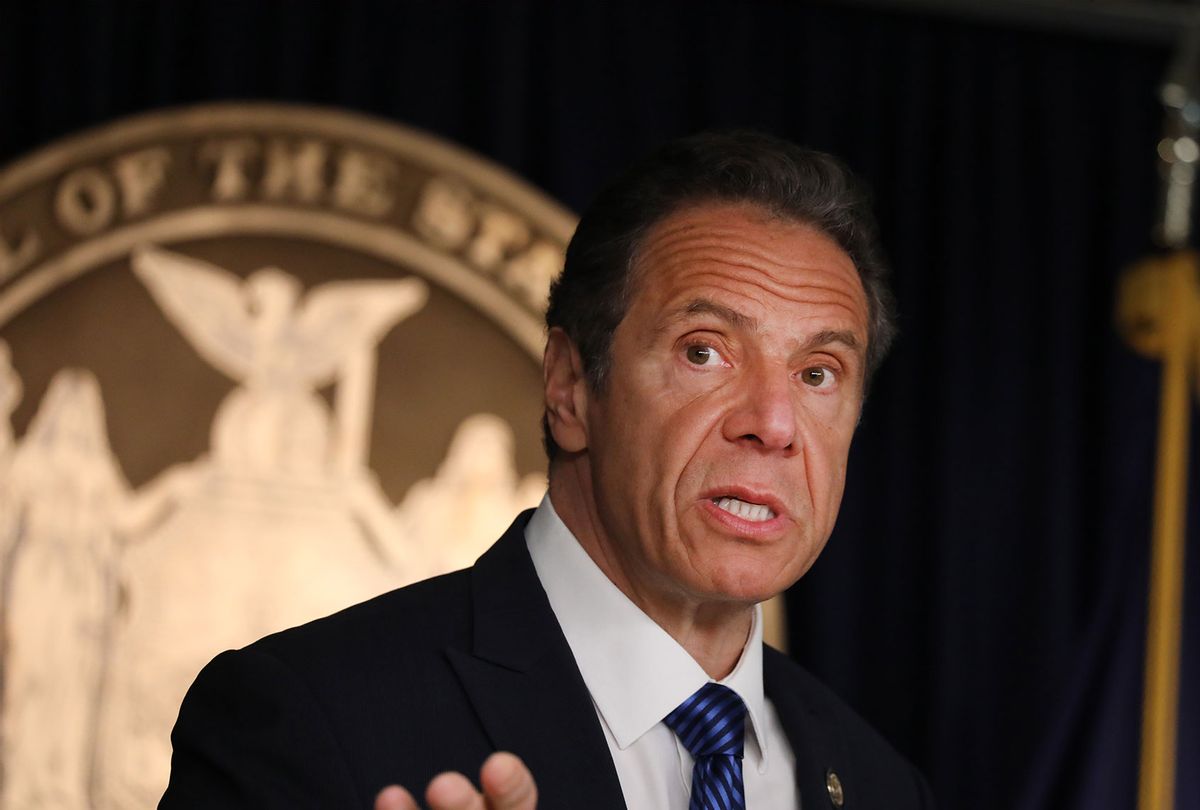 New York Governor Andrew Cuomo speaks to members of the media at a news conference on May 21, 2020 in New York City. While the governor continued to say that New York City is seeing a steady decline in coronavirus cases, he also mentioned that the number of countries reporting a mysterious illness in children believed to be connected to COVID-19 has nearly doubled in just one week. (Spencer Platt/Getty Images)
--

Monday night, a third woman stepped forward to accuse Gov. Andrew Cuomo of being what a 19th century author might delicately describe as "overly familiar." Anna Ruch, speaking with the New York Times, described meeting New York's Democratic governor at a wedding in 2019, at which he, moments after meeting her, put his hands on her bare lower back, asked if he could kiss her, and called her "aggressive" when she removed his hands from her body.

"I was so confused and shocked and embarrassed," Ruch told the Times, corroborating her story with a friend's account and a picture that makes clear how gross the entire situation was for her.

Ruch's account follows two other accusations from two other women who worked under Cuomo in the governor's office.

Charlotte Bennett worked as an executive assistant and health policy adviser to Cuomo. The New York Times reports allegations that he engaged her in intrusive conversations about sex and dating, "including whether she thought age made a difference in romantic relationships, and had said that he was open to relationships with women in their 20s — comments she interpreted as clear overtures to a sexual relationship."

The other accusation, from former aide Lindsey Boylan — who is currently running to be the Manhattan borough president — is far more serious. In an essay published at Medium, Boylan describes Cuomo forcibly kissing her, asking her to play strip poker, and constantly finding excuses to touch her inappropriately. Unlike with the other two accusations — which the governor responded to with a tacit but still blame-deflecting admission that he's done things that "have been misinterpreted as an unwanted flirtation" — Cuomo's office has adamantly denied Boylan's account.

While Republicans have been hypocritically calling on Cuomo to resign, Democrats have largely been more circumspect. The response has largely been to call for an investigation, not an immediate resignation.

Michelle Goldberg of the New York Times interpreted this response as evidence that power of the #MeToo movement has weakened, especially in light of "tremendous bitterness toward those who pressured Al Franken to leave the Senate in 2018 after he was accused of grabbing several women's butts." She also points out that "many Democrats are sick of holding themselves to a set of standards that Republicans feel no need to try to meet."

The latter is absolutely true. The same Republicans who stood by Trump or Justice Brett Kavanaugh are pretending to care about these allegations for nakedly opportunistic reasons. And certainly, there's no doubt still many Democrats still support Franken, and clearly believe a little bit of unwanted ass-grabbing is something women should just put up with. But I wouldn't be writing the eulogy for the #MeToo movement just yet. It's just as likely that people are slow-walking this Cuomo story for reasons other than a declining interest in fighting sexual harassment.

For one thing, despite the repeated efforts to paint the #MeToo movement as a bunch of hysterical ninnies whining about being flirted with, the reality is the vast majority of stories unearthed during the height of the movement in 2017 and 2018 were about blatantly illegal behavior from men. Most men exposed had been getting away with violations ranging from illegal workplace harassment to outright criminal assault and rape. And while a lot of Democrats still defend Franken, it's important to recall that some of the accusations against him involved groping, which falls under the umbrella of "sexual battery" in most states.

Bennett and Ruch's accusations fall into more of a legal gray zone.

Bennett describes Cuomo dropping a lot of hints but not outright hitting on her, which may or may not fall outside of the legal definition of sexual harassment, depending on how persistent it was. Ruch's story is gross, but even the most Valerie Solanas-loving feminist probably doesn't like the idea of using the blunt instrument of the law to handle men pressing their luck with women at parties. Boylan's accusations are more serious, but she is unwilling to talk to journalists who can do the leg work of investigating her claims, and feminists — despite accusations to the contrary — do not want to punish men over unverified accusations. Under the circumstances, waiting for results from an investigation into claims isn't overly cautious, but common sense.

Ruch's account, aided by unsettling photographic evidence, does open some questions, like how to talk about the problem of sexually domineering behavior that doesn't cross legal lines but is still creepy and unfair to women who deserve to move through their lives without having to navigate intrusive behavior from men. There's very few women alive who don't have stories like Ruch's, of men who keep crossing boundaries women set. These men exploit the fact that women draw more social penalities for "acting out" or "being a bitch" for setting the boundary than men do for being jerks. Ruch's telling illustrates this phenomenon. She tried to gently set a boundary by removing Cuomo's hands before he immediately called her "aggressive." One can only imagine how bad it would be if she had actually been aggressive. Women who push back harder often get called names or yelled at. Or worse. Men act like creeps because they know it's women who get the social disapproval for pushing back, and not the men who necessitated the pushback.

The ugly truth is that the only real solution for this problem is social shifts, so that men face more opprobrium for crossing lines than women do for setting them.

The problem is, despite all the hand-wringing about "cancel culture" and "#MeToo going too far," most people live in a world where there's still a greater social penalty for women who say no than for men who keep pushing. I don't have the answer for how we get there. The best I can offer is to keep talking and telling stories and making men uncomfortable and standing up for women when this happens, rather than the current situation, where it's women and not creepy men who get accused of "making a scene." Cultural change requires a lot of diligence and small but persistent choices made on a daily basis by large numbers of people. But it can be done. I've seen a lot of change in the course of my own life, in terms of men behaving with more respect in social situations. We have a long way to go, but that amount of change suggests more is possible.

So far, the Cuomo scandal illustrates the limits of what the law can do to force men to be better. We can arrest men for sexual assault. We can sue them and fire them for sexual harassment. But no one wants to call the cops on someone for being a lech at a wedding. That falls into the more complex realm of social policing, and that will require ordinary people to actively choose, on a daily basis, to stop prioritizing men's feelings over women's freedoms. It can be done, but only if we keep talking and telling our stories.