Mink farms are notoriously oppressive, but COVID-19 outbreaks at facilities are putting them in the spotlight 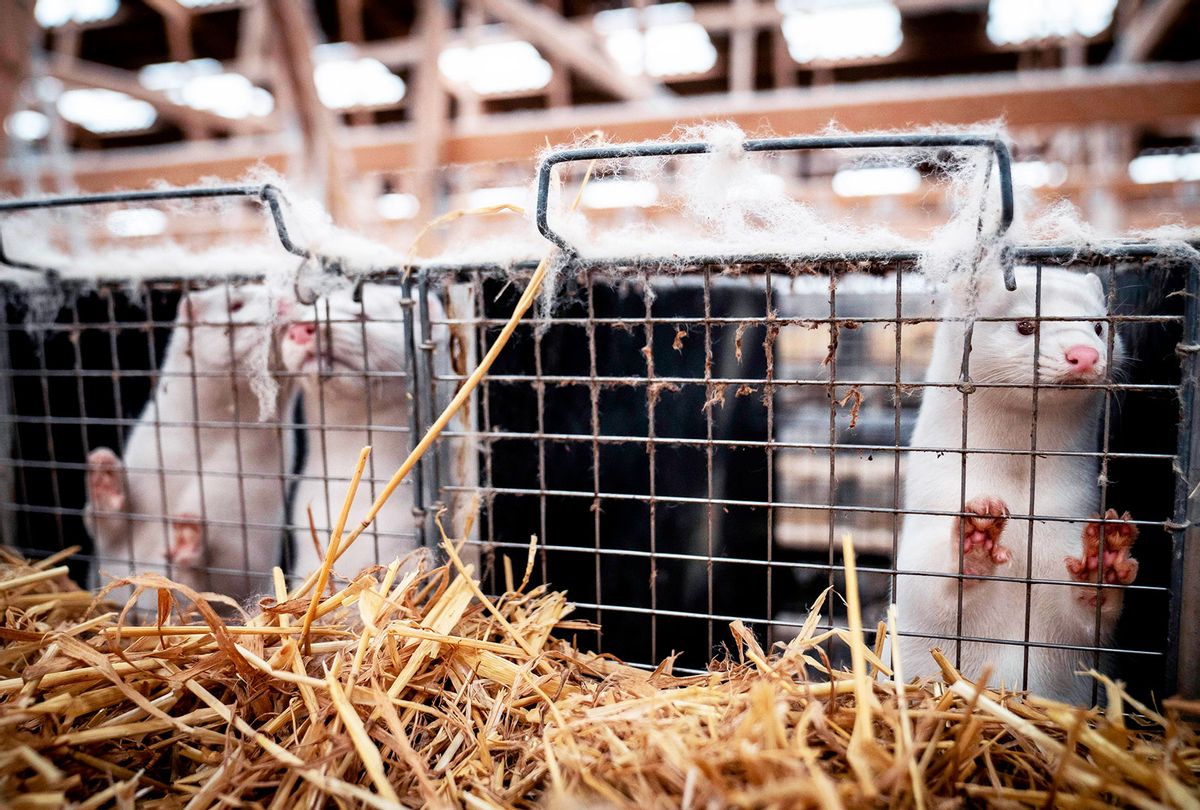 Mink look out from their cage at the farm of Henrik Nordgaard Hansen and Ann-Mona Kulsoe Larsen as they have to kill off their herd, which consists of 3000 mother mink and their cubs on their farm near Naestved, Denmark, on November 6, 2020 (MADS CLAUS RASMUSSEN/Ritzau Scanpix/AFP via Getty Images)
--

Scott Beckstead remembers the mink that died from terror.

She was a beautiful female with a bluish shade to her coat — they're known as "sapphires" in the mink industry — and he was at a mink farm owned by his grandfather. Beckstead describes his grandfather as a "kind, wonderful, generous man" who "sincerely tried to give his animals the best life he could." That said, Beckstead recalled sadly, "there are some realities about mink farming that are just unavoidable."

This was one of them.

"The foreman pulled out this sapphire female, and she struggled and she screamed," Beckstead told Salon, describing an incident that occurred in one of the last years that he visited his grandfather's southern Idaho mink farm. "Then she went limp. She literally died. There is no doubt that she was terrified. She had watched what was happening to the mink next to her. I think, honestly, the only explanation is that she died of sheer terror."

His grandfather "cursed" when he saw that; "the sapphires are so fragile," he rued. Beckstead was struck by the fact that his grandfather was genuinely upset at how that mink died. Though she was to be killed for her fur ultimately, he did not want her life to end in the way that it did.

Beckstead is now the director of campaigns for animal wellness action at the Center for a Humane Economy. The organization, a non-profit that tries to change how businesses behave in order to create a humane economic order, is supporting a recently-proposed bill that would ban mink farms in Oregon. There are many reasons to ban mink farms strictly from the perspective of animal rights, but a new reason has incentivized that movement: The COVID-19 pandemic.

For biological reasons, the novel coronavirus is particularly prevalent among mink, as mink and other mustelidae such as ferrets are notorious for unwittingly serving as virus mutation factories. Mink are so prone to developing COVID-19 infections that outbreaks have repeatedly and disproportionately cropped up in areas with mink farms. The problem is extremely serious, to the point that last year Denmark ordered thousands of mink to be killed and buried in shallow graves to halt the spread of SARS-CoV-2. This led to the unappealing sight of bloated, decayed mink carcasses literally rising out of their graves as their corpses filled with gas.

"When they're put in confinement, they are in this very unnatural situation," Lori Ann Burd, environmental health director at the Center for Biological Diversity, told Salon. Unlike pigs, cows, chickens and other animals that have spent generations being domesticated, mink don't have that history; they still think and behave like wild animals. This is not to say that factory farms aren't already vectors for disease and pollution (they are), or that mink won't already be particularly prone to illness from living in such close quarters (they will).

In any case, mink strongly resist being held captive in small cages. And those wild instincts exacerbate matters.

"They're extremely stressed in those situations," Burd explained. "Because that confinement is so unnatural, mink are extraordinarily good escape artists." There was already one instance where an Oregon farm had a COVID-19 outbreak and, despite being under quarantine, three of the mink managed to escape. Of those mink, two tested positive for COVID-19.

"We don't have any exact numbers on the percent of mink that escape, but it's obvious that escapes are common," Burd explained. "They happen even when the facility is supposed to be under a strict quarantine."

Not surprisingly, Oregon mink farmers are fighting against Senate Bill 832, which would ban mink farms in the state. Burd told Salon that to address this reality, the bill would offer assistance to people who would lose their jobs as a result of the ban. Yet many Oregon officials seem inclined to sweep the issue under the rug.

"They said, you know, 'Don't worry about it. We have everything under control,'" Burd recalled when describing how Oregon authorities reacted after her organization contacted them with concerns about mink farming and COVID-19 outbreaks. "That very day, the first outbreak at an Oregon farm was reported." The Center for Biological Diversity reached out again to express concern that mink could spread the disease to wild animals, which subsequently happened.

Despite their concerns being validated, however, the facility ended its quarantine after testing a "minuscule" percentage of the mink and found them to be negative.

"Workers can come and go freely," Burd told Salon. "Mink breeding is continuing and we're very, very concerned because just because a few of the mink tested negative, [that] does not mean it's not in this facility, and COVID-19 in mink is unpredictable in its manifestations."

Beckstead echoed Burd's concerns, describing how the mink farming crisis has reached a new level of urgency because the conditions there make them ripe for COVID-19 outbreaks. He also spoke from the heart about how, when one understands the mind of a mink, it is easy to see how the farming practices are inherently cruel.

"This is an animal that has the instinct to be out roaming over vast territory," Beckstead explained. "The animals are semi-aquatic, so they have a strong instinct to spend a lot of time in the water. To take a wild species and raise it on factory farm conditions is inherently cruel, which I think is why the animal welfare community has long wished that they would eventually become obsolete or extinct."

He recalled another story from the days on his grandfather's mink farm, the fact that he was not allowed to visit the mink yard when the females were having their babies because "the slightest disturbance would cause them to cannibalize their litters."

"Those kinds of stories just speak to me of how unnatural of a setting these mink farms are," Beckstead explained. "This is not a species that belongs on factory farms. I mean, no species belongs in factory farms, but to factory farm an inherently wild species, I think, adds an additional layer of suffering and misery."