"It makes zero sense to abandon precautions," one public health expert says of the move 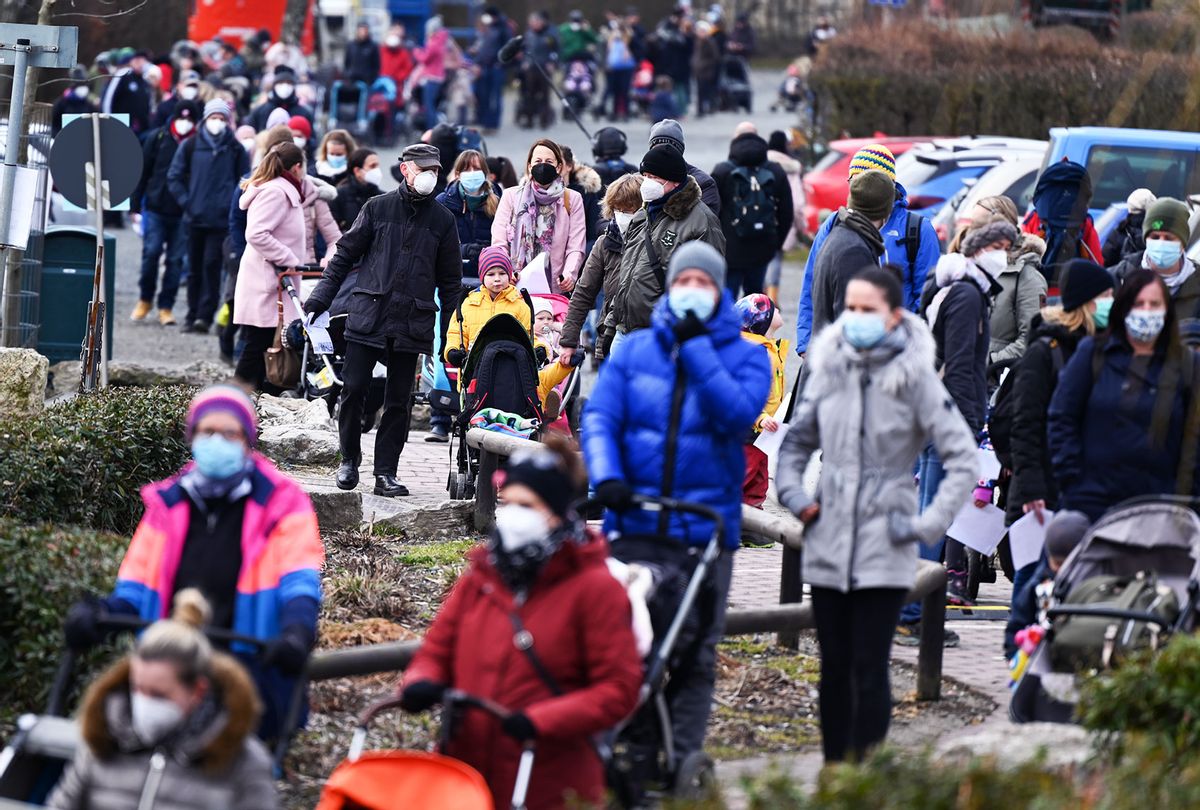 Families queue up in front of the entrance to the Opel Zoo before its reopening. The extensive measures to protect against infection with the corona virus have been relaxed somewhat in Hesse. On the first opening day after the lockdown, the rush was great. (Arne Dedert/picture alliance via Getty Images)
--

West University, a small city in Texas' Greater Houston metropolitan area, is grappling with the state's impending removal of COVID-19 mask mandates and business restrictions. Even though the policies are set to be implemented on Wednesday, many business owners in the state are unsure how to respond to it.

"I don't believe the onus should be on small business, especially in the hospitality industry," Al Jara, owner of a West University watering hole called Marquis II, told Houston ABC affiliate KTRK when describing his frustration over figuring out how to best satisfy his customers. "Over the last year, we've been hurt the most, and requiring us now to take a side on the mask isn't right in my opinion."

Texas is not alone in rolling back COVID-19 restrictions designed to protect public health. Last week Republican governors in West Virginia, Mississippi and Alabama joined Texas' Gov. Greg Abbott in announcing varying degrees of loosening or phasing out pandemic regulations that had been put into place over the past year. Some states, like Alaska and Georgia, never implemented mask mandates in the first place. Others, like Florida, decided to reopen their businesses months ago (September in the case of Florida).

In Texas specifically, Abbott has vowed to open the state "100 percent" by ending a mask mandate implemented in July and telling businesses they can reopen. Mississippi has already ended its statewide mask mandates and state-imposed pandemic restrictions. In West Virginia, the governor announced that restaurants and bars will be able to operate at 100 percent seating capacity, but he drew the line at revoking the mask mandate.

It seems political leaders in the South are particularly fed up with pandemic-related public health restrictions. Alabama Gov. Kay Ivey actually announced that she was extending the statewide mask mandate until April 19, but it is currently expected to expire at that time. Arkansas announced an end to most of its indoor capacity restrictions last month and said that, if the state falls below certain thresholds in hospitalizations and test positivity, it will end its mask mandate on March 31.

Public health experts have been unequivocally horrified at the moves, and say prematurely removing mask mandates and fully reopening businesses is a very bad idea.

"The decision to reduce mask wearing and reopen business anywhere in the US in extremely unwise and in fact dangerous," Dr. William Haseltine, a biologist and chair of Access Health International, told Salon by email. "Twice we reopened prematurely and have suffered grievously in terms of numbers of dead and of those who are suffering from long term Covid-related disease."

Haseltine was not alone in expressing this concern.

"From a public health perspective it makes zero sense to abandon pandemic precautions at this time!" Dr. Alfred Sommer, professor of epidemiology at Johns Hopkins University, wrote to Salon. "Only a small percentage of our population has been vaccinated as yet — we won't have herd immunity that would materially reduce our collective risk until 70+ percent have been immunized. Nothing has changed that should embolden relaxing our guard at this point."