Britney Spears apparently has some pretty big fans in Congress 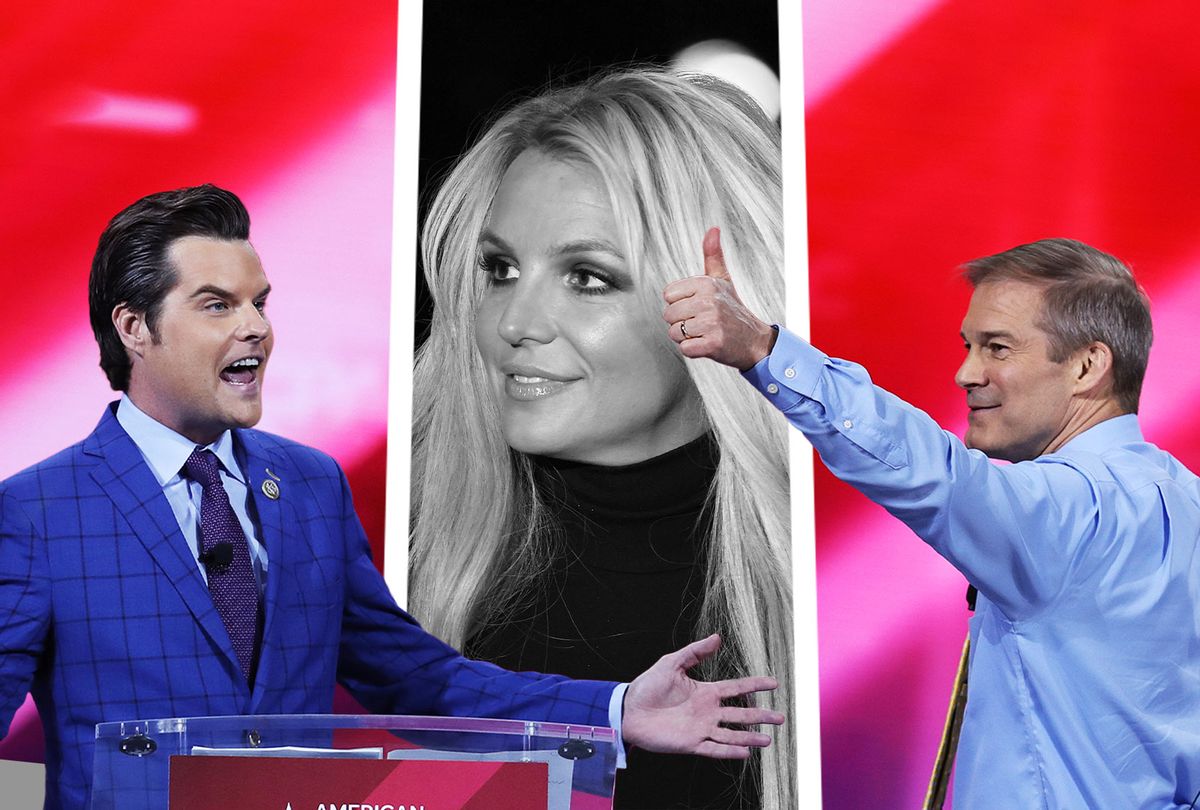 Britney Spears apparently has some pretty big fans in Congress.

In a letter sent to the House Judiciary Committee, Rep. Matt Gaetz, R-Fla. –– apparently, a longtime Britney stan –– and fellow Freedom Caucus member Rep. Jim Jordan, R-Ohio, cited Spears' high-profile case, recently covered in The New York Times Present's Framing Britney Spears, as a prime example of how vulnerable people can be coerced into handing over their finances to an exploitive third party. The pair argued that conservatorships, like the one Spears was placed under, have the dangerous potential to strip people of their civil liberties.

"The House Committee on the Judiciary is charged with safeguarding the rights affording to Americans by the U.S. Constitution," their letter states, "These rights include having the free will to guide one's own affairs and the legal autonomy over one's own finances. When situations suggest the unjust deprivation of those rights by the government, we have an obligation to conduct oversight and explore potential remedies."

"Ms. Spears is not alone," Gaetz and Jordan continued, "There are countless other Americans unjustly stripped of their freedoms by others with little recourse. Given the constitutional freedoms at stake and opaqueness of these agreements, it is incumbent upon our Committee to convene a hearing to examine whether Americans are trapped unjustly in conservatorships."

Appearing on Fox News this week, Gaetz called on the pop star to testify before Congress.

"I think Britney would be a great witness," the Florida Republican argued, "and would likely have a lot to say on this subject."

Jordan and Gaetz specifically questioned the motives of her father, Jamie Spears, who has been Britney Spears' legal conservator since a court-ordered arrangement in 2008, effectively deeming Brittney unequipped to handle her finances, as well as many other aspects of her personal life.

"The facts and circumstances giving rise to this arrangement remain in dispute," the letter states, "but involve questionable motives and legal tactics by her father and now-conservator, Jamie Spears." At the time, Spears' father had argued to the court that many people in his daughter's personal life were taking advantage of her, hence the seeming need for a conservatorship and pushed back on Gaetz and Jordan via a statement from his lawyer.

In 2019, a social movement called #FreeBritney coalesced, dedicating itself to bringing Spears' legal entanglement to light and freeing her from it.

The letter also alluded to the case of Daniel Gross, a Long Island elderly resident who was involuntarily put into a court-ordered conservatorship and assigned to a nursing home for ten months, despite several pleas for release. The two Congressmen also cite a GAO report from 2010, which identifies a number of  examples of legal guardians improperly gaining access to millions of dollars by way of conservatorships, with "hundreds of allegations of physical abuse, neglect and financial exploitation by guardians in 45 states and the District of Columbia between 1990 and 2010."

Gaetz told Business Insider that watching Framing Britney Spears is what motivated him to tackle the issue. "After seeing the Britney Spears documentary," he said, "I reached out to a number of policy experts [...] to refresh my understanding of the federal due process implications. I'm very familiar with the issue as a Floridian. I served on the judiciary committee in the Florida House of Representatives, and we have a lot of elderly people that get taken advantage of in the guardianship process."

It remains unclear, however, the extent to which Gaetz and Jordan will make conservatorship a part of their political platform, given that they appear thoroughly occupied conserving the chaos and conspiracy of the Republican Party — like ensuring OANN remains on televisions across Capitol Hill.