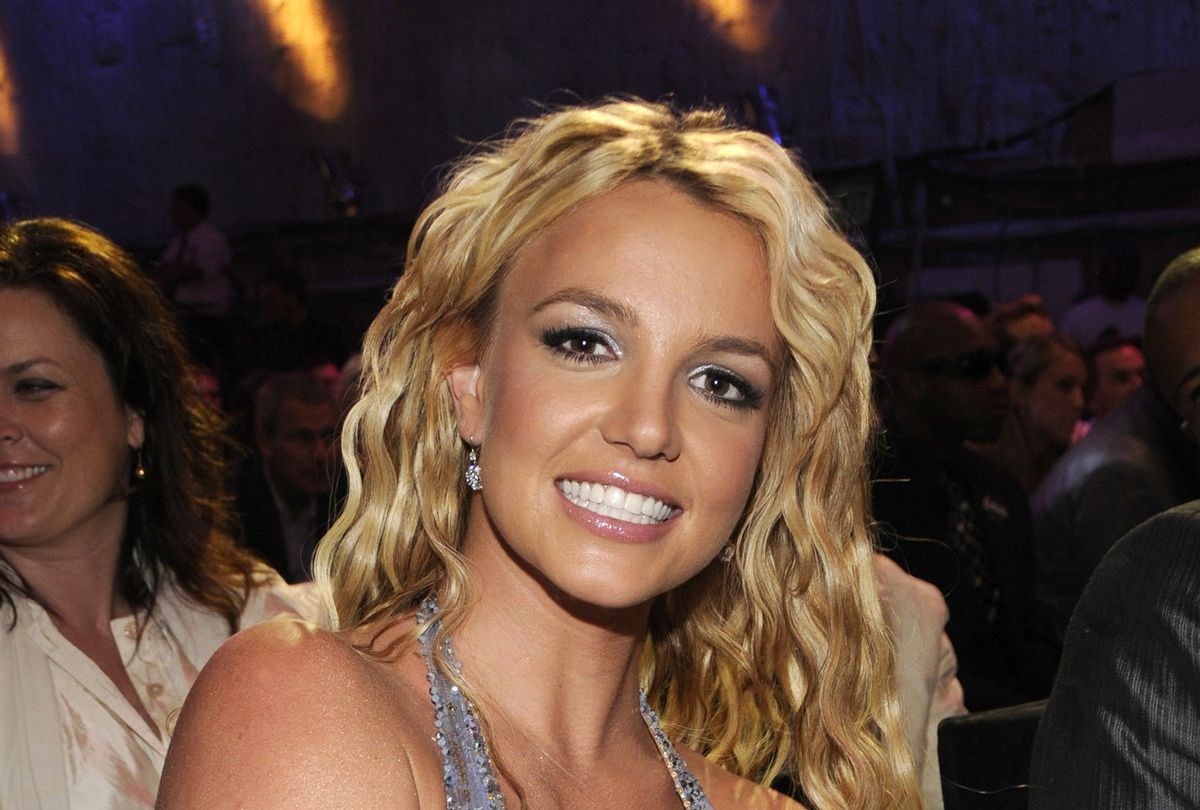 Britney Spears in the audience at the 2008 MTV Video Music Awards at Paramount Pictures Studios on September 7, 2008 in Los Angeles, California. (Kevin Mazur/WireImage)
--

At first blush, it's a little strange that the New York Times documentary "Framing Britney Spears," which first aired on FX and streams on Hulu, did so much to capture the national imagination. The show does a good job of presenting the case, advocated by the #FreeBritney movement, that Jamie Spears, Britney's father, exploited the misogynistic and overblown coverage of the star's otherwise treatable mental health issues to falsely portray her as permanently unfit, thereby gaining legal control over her life and money. But it is also true that this is a unique situation that affects one person in the whole world, and not, at least on its surface, a widespread social problem affecting people not named "Spears." So why has it inspired so much fascination and so many think pieces and social media conversations?

The easy answer is that we live in a celebrity culture where ordinary people overly relate to famous people, a phenomenon so common psychologists created a term for it: "parasocial relationships."

I think it runs much deeper than that, however. People relate to Spears, not because they are also under conservatorships run by controlling and greedy fathers, but because her story is such a profound symbol of what was done, in general, to her generation — especially the women and queer people who make up the #FreeBritney movement. The voyeuristic, sexist, controlling, judgemental abuse that was heaped onto Spears by the press for the first decade-plus of the 21st century was clearly the first shot in what was an all-out sexist assault on millennials. It started with "abstinence-only" and played out all the way through the election of a creepy old boomer who bragged about how he grabbed the women of Spears age "by the pussy."

I was 21 when Spears's first record, "....Baby One More Time" came out, and my memory of the whole Britney phenomenon was primarily that it was weird. The 90s had hardly been perfect, but it was a time of great progress for women in music. Tori Amos, TLC, P.J. Harvey, Bjork, Missy Elliott, Hole, Salt-N-Pepa, Liz Phair and Lauryn Hill all made a huge impact, often with songs that told women's stories from their own, sex-positive perspective.

Then, at the end of the decade, there's a sudden interest in the virginity of this sexy young starlet. The Britney Virginity Watch — which was soon accompanied by the Jessica Simpson Virginity Watch and the Olsen Twins 18th Birthday Countdown — became a national obsession. This wasn't just some weird pop culture thing. The hymen statuses of the up-and-coming millennial generation soon became a political fixation.

After the election of George W. Bush in 2000, the newly empowered religious right went to war on young people. Abstinence-only education, which preached against the use of contraception and told kids to "wait" until marriage, was foisted on public schools. Purity rings and virginity pledges became trends, especially in red America. Sex-shaming myths — that sexually active women can't fall in love, that women are "naturally" modest, that female-controlled contraception is "abortion" — spread wildly. Hysterical and often false stories about youth sexuality caused a national panic about "hook-up culture." The Bush administration kept blocking the legalization of emergency contraception.

It may have started with the religious right, but the sex panic swept the country in the early 21st century.

In retrospect, it makes a lot of sense, because it was all happening as the millennials were coming of age. Unlike the relatively small generation X, millennials had the numbers — there's more of them than there are of boomers! — and therefore were expected to have real social power. Moreover, the girls had been raised in an era of "girl power" and there was real reason to believe that this generation could grow up to be more egalitarian and feminist than any before. Recall, the average age of marriage and first childbirth was rising rapidly in the 21st century. Women were outnumbering men on college campuses.

Unfortunately, such social progress often leads to an ugly backlash — and the abuse of Spears in the public eye foreshadowed what was coming for millennial women writ large.

The virginity fixation and shaming of premarital sex was a huge part of this. It was quite clearly about trapping millennial women with unplanned pregnancies and early marriage, as well as discouraging the use of birth control, a major tool young women need to finish college and get a good start in their careers. The perfect encapsulation of this, at least until Trump ran on his woman-hating platform, was the way that Rush Limbaugh — the embodiment of the worst kind of right-wing boomer — waged war on Sandra Fluke, a millennial law student who spoke out for insurance coverage of birth control. Even by his usual standards, Limbaugh's leering sexism was off-the-charts, unleashing 46 separate personal attacks on the young activist, calling her a "slut" and a "prostitute" and demanding that she make sex tapes for his personal enjoyment. All because she spoke out for birth control, a service 99% of women who have sex with men will use at some point.

But while sex was a centerpiece in this war on millennials, it was hardly the only front it was being fought on.

The first couple of decades witnessed the rise of an entire anti-feminist industrial complex that was geared largely around preventing millennial women from accessing the gains that were promised in their "girl power" youths. Anti-feminists — who were often older women exploiting sexist fears — like Christina Hoff Somners and Caitlin Flanagan penned well-publicized tomes declaring that it was boys who were the "real" victims of sexist oppression, how "girl power" was ruining young women, and how women are secretly happier being housewives. This era also saw the rise of the "men's rights" movement, which has rapidly expanded into all manners of sexist hate communities, from the incels to the Jordan Peterson fans to the Proud Boys.

To a large extent, this backlash worked, at least on a lot of millennial men. Polling shows millennials, especially white men, are more likely than gen-Xers to agree that husbands should be the primary authority in the family. Millennial men tend to reflexively view women as less intelligent than men and they still expect their wives to do most of the housework. And while millennial men and women both less conservative than the older generations, there is a persistent gender gap, with 44% of millennial men voting Republican compared to only 31% of millennial women. No wonder, when the coronavirus hit, it was working mothers and not fathers who took most of the economic blow from scrambling for childcare.

Unsurprisingly, then, the press treatment of Spears set a template that is used to abuse women who are far less famous than she, especially in the age of social media. Gamergate, in which an angry and mostly male group of social media users unleashed relentless abuse on anyone perceived as "feminist" in gaming circles, is the most prominent example, but the problem goes well beyond that. Women, for instance, are twice as likely to have experienced harassment on a dating app than men.

So ultimately, it makes a lot of sense that Britney's story resonates. Hers is an extreme situation, but one that reflects a lot of pressures on millennial women. Like her, they grew up to be hard-working and ambitious, only to find that society was far more interested in policing their sexualities and putting them down than celebrating their talents. Yes, the #FreeBritney movement is about helping this one woman whose music clearly means a lot to people. But it's also a symbol for those in her generation who are fed up and ready to start claiming the equality and independence that was promised to them as their birthright.