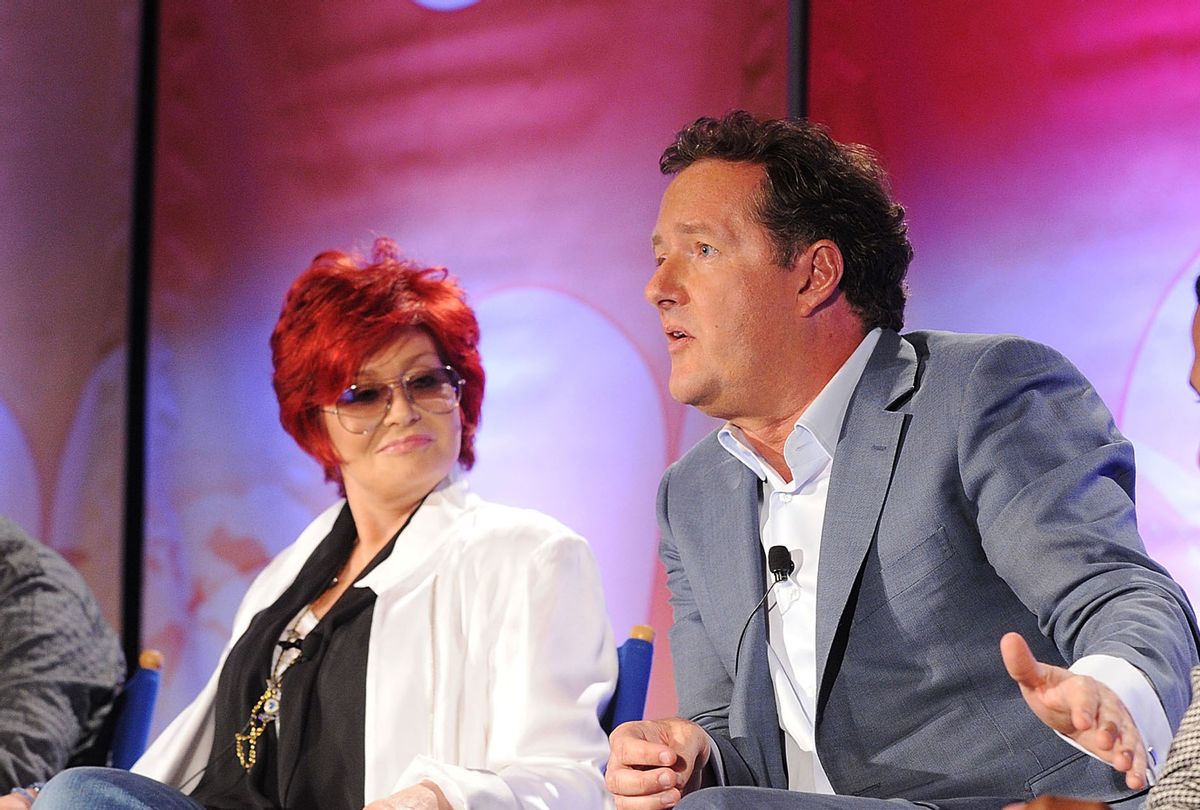 This week Sharon Osbourne achieved the previously unthinkable by making "The Talk" more of a conversation piece than "The View." Granted, its ABC rival had a strong start on Monday, but all it took for Osbourne to unseat Whoopi Goldberg and Meghan McCain was to take Piers Morgan's side in his one-sided war with Prince Harry and Meghan Markle, the Duke and Duchess of Sussex, and fail to comprehend why the public responded by accusing her of racism.

To review: Morgan reminded us of what a peach he is on Monday by responding to the vulnerability Markle showed during Sunday's "Oprah with Meghan and Harry" special on CBS, including her confession that at one point she "didn't want to be alive anymore," by declaring on ITV's "Good Morning Britain" that he didn't believe a word she said.

In response some 41,000 viewers complained to the network about Morgan's comment, including the Duchess herself. On Tuesday his colleague Alex Beresford took him to task for his hateful obsession with Markle, leading Morgan to storm off the set mid-show and tender his resignation.

That alone would have given Osbourne and everyone else on "The Talk" a pile of thoughts to sort. But she unwittingly (and perhaps witlessly) redirected the squall back on her by tweeting "@piersmorgan I am with you. I stand by you. People forget that you're paid for your opinion and that you're just speaking your truth." For clear reasons to nearly everybody but Osbourne herself, the public turned on her.

This brings us to Wednesday's episode of "The Talk," of which it's safe to say most people have seen approximately two minutes and 20 seconds.

Within this timespan Osbourne attempts to address her gaffe head-on, letting us and co-hosts Sheryl Underwood, Elaine Welteroth and Amanda Kloots know how disquieted she is to be called a racist. Mind you, she didn't say this with as much clarity as she proved it by subjecting the audience to an expletive-laced insistent rant while, in a burst of extreme irony, attacking Underwood, one of her Black colleagues.

Osbourne seems calm at first. "I feel even like I'm about to be put in the electric chair because I have a friend who many people think is a racist. So that makes me a racist," she opines. "And for me, at 68 years of age, to have to turn around and say, 'I ain't racist.' What's it got to do with me?"

Blindsided by her fury, Underwood does her level best to throw to a commercial with, "Well . . ." before Osbourne interjects with an aggressive, "Well what?!"

"Well," Underwood resumes, "we will be right back. We have more topics, so don't go away." Before the producers cut the mics they pick up one more rabid morsel from Osbourne: "And I think we should stop this fu—"

After the break production cuts in as a noticeably rattled Underwood is speaking. "We are doing live TV right now," she says, her voice straining not to break as she keeps on trying to save Osbourne from herself. "But I want you to hear from me –"

"I will ask you again, Sheryl," Osbourne snipes at Underwood with boiling indignation, clutching a tissue in her hand.  "I've been asking you during the break. I am asking you again. And," – she jabs her finger at Underwood – "don't try and cry because if anyone should be crying, it should be me! This is the situation. You tell me where you have heard him say – educate me, tell me – when you have heard him say racist things. Educate me! Tell me!"

Underwood is under no obligation to do that, but she does her best anyway, explaining that words themselves don't have to be racist – the implication of what Markle understood is enough. For Morgan to try to dismiss that or downplay the gravity is racist, Underwood continued before adding, "But right now, I'm talking to a woman who I believe is my friend. And I don't want anybody here to watch this and think the we're attacking you for being racist. And that for that, if I articulated –"

But Osbourne is unmoved. "It's too late!" she sniffles. "I think that seed's already been sown."

To address this kind of struggle, "Inside Amy Schumer" once produced a parody infomercial for a place called "Generations," advertised as "a revolutionary new facility where we give your elderly loved ones the politically correct social skills they need to get along in the modern world."

On its menu of offerings are various classes designed to help clients overcome deeply rooted stereotypes, including a "two-week Asian intensive" where "your loved one will first learn what words are 'never says.'"

Although "Generations" was made in 2014 that sketch has bobbed to the surface of my consciousness over the past year because of an uptick in encounters and exchanges like Osbourne and Underwood's. Or maybe it isn't that these moments have increased so much as the feeling that women of color have grown tired of handling them with a dignity such questioners do not afford them in return.

Perhaps it's knowing that people who cry "Educate me! Tell me!" aren't seeking understanding as much as they want absolution without amends. They're content with saying sorry to make themselves feel better and they want to be able to say they've apologized without honestly making an effort to grapple with the reasons they were wrong. The "never says" aren't the issue; it's what they're doing, refusing to do and refusing to recognize.

One of the unfortunate roles we assign to daytime personalities cast on a panel shows like "The Talk" is the obligation to express points of view that segments of the audience are feeling but don't have the confidence or the knowledge to articulate.

Because of this, it can burden some members of the cast with the expectation of having all the answers while others can play upon their personality and skate free from disasters they've created. Paroxysms of this magnitude aren't typical on "The Talk," but people who tune in to see Osbourne think of her as the foul-mouthed but jolly mom from "America's Got Talent" or MTV's "The Osbournes." They enjoy the woman who threw a ham over a fence to protest a noisy neighbor and overlook the fact that she's also done things like kneed a man in the nuts after he defaulted on money she was owed.

To be clear, the unfortunate party here isn't Osbourne. It's Underwood and Welteroth, who cogently take on the emotional labor that Osbourne won't do for herself. That part can only be witnessed in the full 20 minutes of back-and-forth surrounding that viral clip, and if you care enough to find out why Osbourne's reflexive support for Morgan felt to many women like a jab in the eye, it is worth a watch.

A fuller examination of Osbourne's meltdown doesn't exonerate her, understand. If anything it'll remind viewers that despite her protests, nobody should expect Sharon Osbourne to be particularly enlightened when it comes to racism. This is a woman who has spent most of her life insulated within a fame bubble with an opaque membrane.

Instead, the reason to watch it is to see how Underwood and Welteroth handle their colleague's freak-out in order to understand why this clip angers Black women in ways that are specific and distinct. The short answer is that many of them have some version of a Sharon Osbourne in their lives they're forced to navigate and placate. But they don't have a camera rolling when these interactions happen, granting them the agency to tell those people to do their own homework while knowing they probably won't.

Underwood and Welteroth couldn't do that without opening themselves up to criticism about their inability to verbalize why Osbourne was wrong to all of the viewers who identify with her. As such, they found themselves with extra chores on their plates.

What we didn't see in that two-minute clip was Underwood telling Osbourne, "to speak upon something and not accept that what she is saying, what Meghan has been saying – it could be true. . . . And the fact that you don't even want to take into consideration that her desire to want to end her own life is connected to her race, that dismissal makes it a racist situation."

Neither does the clip show what Welteroth says to Osbourne prior to her implosion to explain why expressing support for Morgan wasn't a good look. "In this moment, we need people to stand up for anti-racism," she explains. "People feel that he's racist, people have receipts. I wish we had them today so that we could actually go deeper into this conversation, so people could see why people feel that he's racist and sexist. And I mean, there's a lot, but we don't have those receipts here."

At this, Osbourne only thinks to ask Welteroth to explain what she means by "receipts."

Remember Underwood and Welteroth came to set that day expecting to debate cancel culture and Pepe Le Pew and chat up Lisa Vanderpump. That's what makes this unfair. They didn't expect to teach a masterclass in misogynoir to a woman who doesn't understand why she can't be there for her friend in his time of need.

Welteroth does have an answer for her: "When we kind of give passes or give space to people . . . who are saying damaging harmful things, what we're kind of doing is permitting it," she says, before introducing Osbourne to the term unconscious bias. Mrs. O's head explodes anyway, but not due to overstuffing with new information.

"The Talk" is to "The View," its ABC rival, what curling is to hockey, which is to say its fans show up to enjoy its gentility and maybe laugh at the thorny cluelessness of Mrs. O. She's been with the show since its debut, when creator Sara Gilbert envisioned it as a show speaking from a mother's perspective as opposed to a kaffeeklatsch of frenemies.

That is one of the reasons "The Talk" attracts about half the viewership of "The View" – people enjoy conflict and especially love hating on McCain. This is not to suggest "The Talk" should add more trauma into its schedule to succeed so much as to observe what got people to notice and discuss this show is the very thing nobody wants to talk about, playing out in front of our faces.

If "Generations" were real, this episode would be central material for an advanced class in weaponized privilege and white lady tears, gaslighting and the expectation too many white women place upon Black women to incentivize them to be anti-racist.

Underwood, Welteroth and fellow cohost Carrie Ann Inaba, who was out on Wednesday, should never have such discomfort sprung upon them or be forced to attempt dispel a co-star's ignorance.

"This is challenging," Welteroth said. "This is a really challenging thing to have to talk about on national television." Yes it was. But her and Underwood rising to meet that challenge ended up having a lot more staying power than a meme, and more meaning than simply staring stupidity in the face and moving on with a simple "Okaay."

The March 10th episode of "The Talk" is currently streaming on Paramount + and at CBS.com.