Trump can't save vaccine hesitant Republicans: Fox News has turned the GOP into a death cult 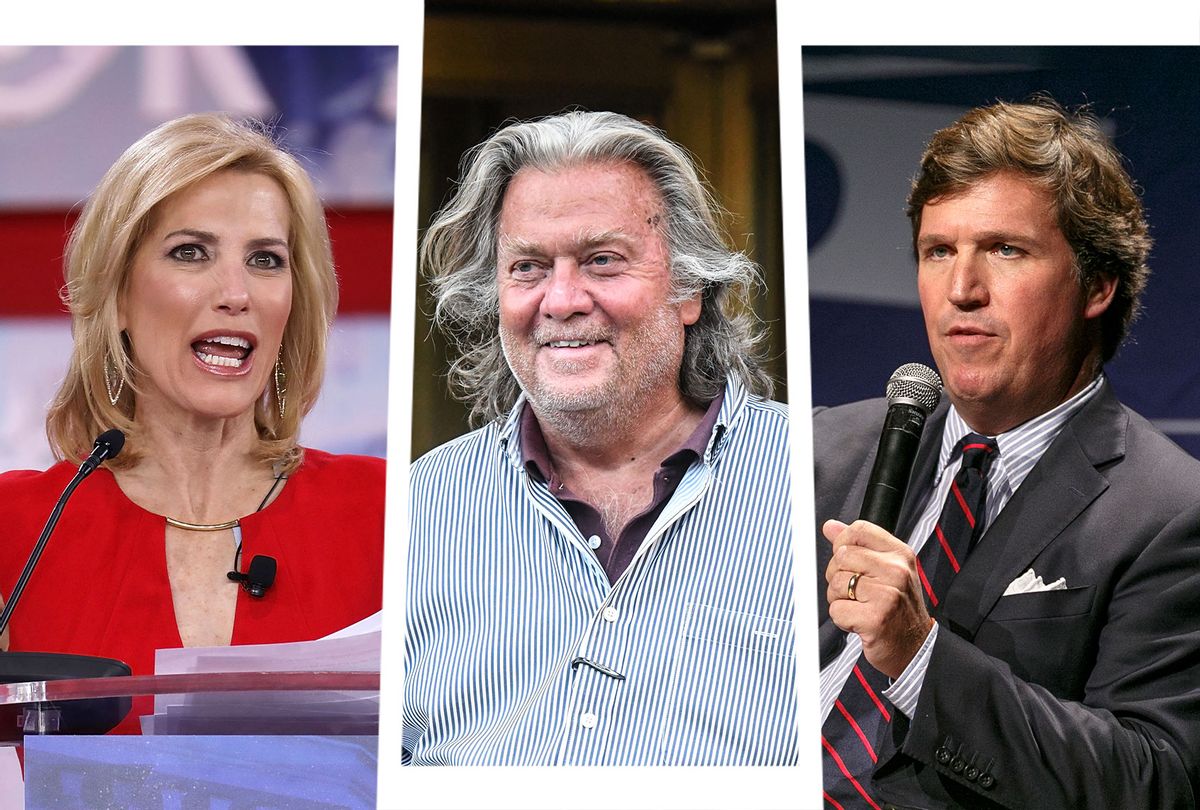 Tucker Carlson really wants his audience to die. The notorious Fox News host and primary mainstreamer of white nationalist views was at it again on Monday night, presenting the coronavirus vaccine as some kind of evil conspiracy and discouraging his audience from getting it.

"How effective is this coronavirus vaccine?" How necessary is it to take the vaccine?" Carlson asked, with his usual feigned expression of skepticism.

He went on to defend the honor of "anti-vaxxers" and lambast social media sites for kicking off people who spread misinformation, claiming, falsely, "there are things we don't know about the effects of this vaccine and all vaccines by the way." This is typical Carlson rhetoric. He doesn't exactly come right out and tell people that vaccines are a nefarious plot. He simply claims he's "asking questions," allowing the audience to believe they are practicing critical thinking when what they're doing is the opposite: rejecting evidence in favor of outrageous conspiracy theories.

When Republican pollster Frank Luntz — who has been critical of anti-vaccination rhetoric and researching strategies to convince Republican voters to get the vaccine — held an online focus group with vaccine-hesitant GOP voters, he found that they had convinced themselves that they were simply engaging in healthy skepticism. "We want to be educated, not indoctrinated," one focus group member told Luntz.

This is, of course, the opposite of true. They are rejecting education in favor of Carlson-style indoctrination, as evidenced by their unwillingness to even read a mainstream news article or the CDC website for the answer to whether or not the vaccine is effective. (It is.) The good news, as Luntz found, is that exposing them to even a small amount of helpful information helped these folks grow more comfortable with vaccination. The bad news is that most of them live in a media bubble, unwilling to listen to anyone outside of the right-wing media circus.

Unfortunately, the cacophany of anti-vaccination lies, which are always presented as "skepticism" of "elites," is only growing louder.

Steve Bannon insisted on his podcast that the vaccines "are not technically vaccines" but instead "experimental gene therapies." (This is a lie. The vaccines work like all vaccines — by training the body to be immune to the coronavirus.) Laura Ingraham accused President Joe Biden of peddling "vaccine propaganda," which again, flatters anti-vaxxers as if they were critical thinkers, instead of people who shut themselves off from and refuse to engage evidence. Right-wing Facebook pages are a major vector of anti-vaccination propaganda.

What's weird about this situation, as many people have pointed out, is that Carlson, Ingraham, etc. are actively trying to get their own audiences killed. Nearly 2% of people who test positive for COVID-19 die of it. For Fox News viewers, who tend to lean older, the risk of death is much higher. Nearly half of male GOP voters say they won't get the vaccine, and it's a certainty that many of them will die because of it. It's usually not considered particularly smart business practice to get your own customers killed, but that's exactly what Carlson and his fellow travelers are doing.

As I noted in Tuesday's Standing Room Only newsletter, there's one obvious reason Fox News is willing to actively kill their own audience: to tank Biden's presidency. So much of Biden's success will depend on getting this pandemic under control. By convincing their own viewers to be disease vectors who keep transmission, hospitalization, and death rates high, Fox News can help keep the pandemic going. It also helps if, by keeping the U.S. from reaching herd immunity, Fox News can keep the country from re-opening. (Which is why it's unwise to wait for conservatives to get vaccinated before lifting restrictions.)

But it's not just about tanking Biden, one dead Fox News viewer at a time. There's also something deeper and more sinister going on with the anti-vaccination propaganda being pushed by Carlson and the right wing punditry in general. It really is about turning their audiences into something closer to a cult — even, apparently, a death cult.

One of the most important tools that cult leaders use is to control their followers to convince them to separate themselves as much as possible from the mainstream. Followers are encouraged to see mainstream society as evil, and to distinguish themselves as much as possible in their political views and personal practices. Adopting a different diet or rejecting "Western" medicine is often a part of cult indoctrination.

This is what the right-wing media is doing with vaccines but on a larger scale.

By encouraging their viewers to see even something as mundane and necessary as a vaccine as "liberal" and therefore contaminated, Carlson and his allies can help accelerate the process of alienating their viewers from anything resembling mainstream society. Viewers are then encouraged, like cult followers, to only trust information coming from Fox News and to reject everything else as part of the "liberal" conspiracy. Paranoia, which is already rampant on the right, becomes the main tool in cultivating this cult-like following.

The worst part about it is that Carlson is doing this while pretending to promote critical thinking. His infatuation with the idea of cults isn't exactly subtle. He frequently does segments apologizing for or covering up for QAnon, even going so far as to encourage viewers to get involved. He's clearly inspired by and learning from QAnon's recruitment strategies, which involve instructing people to "do their research" and tricking them into believing that they're engaging in critical thinking, when they are actually getting indoctrinated into a cult.

This is why the Biden administration is wise not to waste energy trying to get Donald Trump to do more to promote the vaccination. Not only is it useless to try to convince a sociopathic narcissist to do something to help others, but it would probably backfire anyway. As Luntz's research shows, vaccine-hesitant Republicans would probably just assume Trump is being manipulated by the "deep state" and reject his advice anyway, especially if Fox News encouraged this view. That's the beauty of mistaking paranoia for critical thinking — even the most beloved figureheads on the right can be easily reimagined as mere parrots for the all-powerful liberal elite.

Not all is hopeless, however.

Luntz's focus group was open to information they believed was "apolitical," suggesting that one road to getting more conservatives to vaccinate is to drain the political salience from the issue. That will be hard to do with Fox News politicizing it every night, of course, but still, the Biden administration can do their part. One strategy will likely have to be lifting coronavirus restrictions not when we reach herd immunity, but once there's more vaccines than demand. While that does carry some risks for disease spread, it also will help de-politicize the act of getting vaccinated, by ending the association of the vaccine with Biden's call for everyone to do their part, which only causes rebellion among Republican voters.

Unfortunately, the vaccine paranoia is just a part of what is ultimately a larger and more intractable problem, which is that a well-funded right wing propaganda apparatus — with Fox News at its center — is increasingly relying on tactics that are indecipherable from cult indoctrination to alienate their audiences from the rest of society and increase their psychological hold over them. This pandemic of paranoia and cult-like behavior simply cannot be cured with a shot.