Do not rage-cook mapo tofu, and other emotional kitchen lessons

Save over-spicing the mapo tofu for when you want to dole out punishment. You can't just anger-cook any old dish 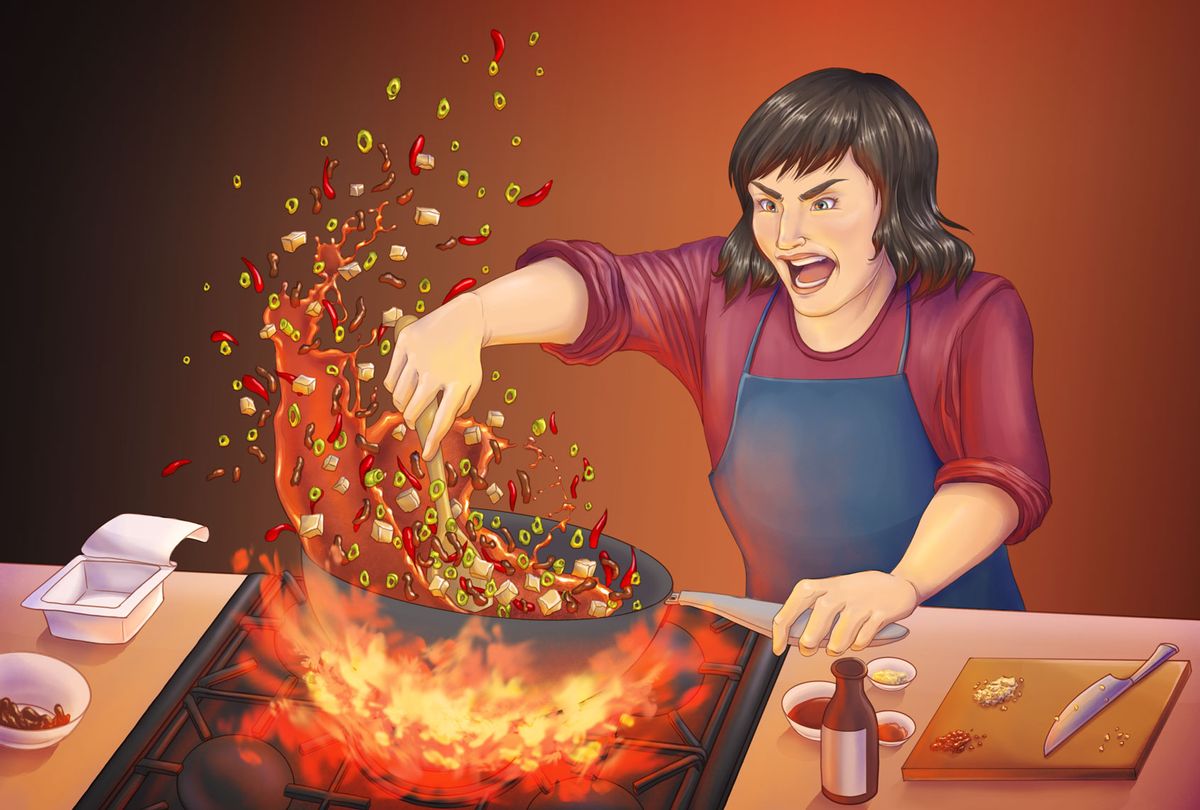 In a recent state of ire about unfettered capitalism, I unsuccessfully rage-cooked a batch of mapo tofu — the intoxicating Sichuan dish of tofu and minced fatty meat suspended in thin, tingly spiced sauce. Though generally pretty forgiving in terms of ratios and substitutes, it requires some subtlety when applying the dried chiles and spices. In other words, blindly crushing and throwing in handful upon handful of numbing Sichuan peppercorns may result in a punishing (not in a good way) meal. As my husband and I crunched through the tingling pods in a silence made tenser by the fact that I was now also mad about ruining dinner, I made an important realization. You can't just anger-cook any old dish.

In this year-plus of quarantine cooking through isolation, sadness and monotony, I've made my share of emotionally charged meals. I know there's something to the very immediate nature of cooking that's supposed to jolt us out of our heads and back to the moment, but what if those heads are especially, stubbornly overloaded? This is where the more physical pounding, hacking, searing and whipping comes in — within limits, of course. Luckily, I've learned enough lessons the hard way, so maybe you won't have to.

For example, do not anger-knead bagels. The dough is far too stiff, which carries an added risk of making you feel physically weak (dare I say helpless?) as you fruitlessly attempt to develop the gluten. You're far better off pummeling something stretchier and more yielding like pizza dough.

I can confirm that stress-chopping vegetables for ratatouille is an excellent release (assuming your knife is sharp enough). After smashing fat garlic cloves to smithereens, you get to hack your way through a veritable garden of onions, peppers, spongy eggplant, squashes and tomatoes. Then there's plenty of time to brood over, say, passive-aggressive door slamming while you sauté each component separately — splashing in generous glugs of white wine whenever the bottom of the pan looks too brown. (Though perhaps consider sipping it at a slightly, uh, gentler pace.)

On that note, nothing beats a good angry meat-sear, sandwich-griddling or fried rice smush — caramelization likes a strong, heavy hand. This logic also applies to pounding out chicken or pork fillets to bread and fry in a skillet, as well as to furiously whipping cream. I'll add one caveat to the latter, aside from starting with a cold bowl: The stabilized version of hand-whipped cream, made so with a late addition of softened cream cheese, stands up taller and holds up longer — which in turn can prop up unstable souls. In fact, I'm a huge proponent of any good, sweaty whisking as a deeply satisfying release; in one of life's delightful contradictions, ferociously beating eggs just before pouring them into the pan both vents frustration and makes for fluffier scrambled eggs.

Tossing, on the other hand, is riskier. Omelets can and will flop out of the pan, noodles will stick to the hood and pine nuts tossed aggressively during toasting will ping across the counter and nestle irritatingly into the crevices between the stove and countertop.

On a deeper level, all this hot-blooded meal prep has me thinking about the relationship between rage and agency, especially in family structures like mine where one person does most, if not all, the cooking.

I, who've eked out a fulfilling, if meager, living these past dozen years as a food and drink journalist, on the whole find real joy and release in preparing a meal, despite the occasional rage-fail. But what about the women in my family who came before — for whom cooking partially represented their limitations?

RELATED: A love letter to all the produce I haven't picked

Take my mom, an artist who stayed home to raise my sister and me while my dad traveled much of each month for his job. She's a terrific, naturally curious self-taught cook, but did she ever resent putting her painting career on the backburner to cook day in and day out for her family?

I don't have many rage-cooking memories of Mom, save for one especially visceral, rage-baking tradition—the painful annual ritual of making Christmas cookies using the same old-ass cookie-stamping gun Mom inherited from my grandma. Over and over, Mom would throw her whole body into jamming that old gun into the baking sheet as it slowly groaned out misshapen trees and snowflakes — 'til she was red in the face and, frankly, pretty pissed. Meanwhile, my sister and I looked on disinterestedly, stole bits of butter-cookie dough, then complained about having so many cookies to decorate.

Why keep up this thankless tradition? Because it was her mom's, she said.

"I always helped my mother in the kitchen, because she was always — um— driven," she said. "Let's face it: They were European immigrants."

My grandparents left Germany during World War II and followed my grandmother's sister to Connecticut. My grandma — Oma to us — worked part-time in retail while raising three kids and maintaining possibly the most impressive backyard garden of all time (85 tomato plants!). A triple-threat cook, baker and preserver who loved and spoiled us grandkids, she was the dogged, suspicious sort who'd peel all our grapes (seriously) and thoroughly wash eggs before cracking them and meat before cooking it. I was five when she passed away, but memories loom large of stealing juicy raspberries from the bucket in her sweltering Connecticut kitchen while she fretfully boiled the rest into jam in the heat of summer and of the fear that permeated the house whenever she made bread — thundering at anyone who dared open the kitchen door to possibly deflate her proofing dough.

Sometimes it was hard to tell whether Oma enjoyed it. So much depended on the perfection of the produce, the bread baking up just right or the roast not being dry — maybe because these were the elements she could control. That she'd set herself such a high bar might also explain why her rage never ruined our dinner. It always left us feeling loved and nourished, if slightly overfed.

The financial hardship and loneliness my grandparents endured dealt easier hands to those of us who followed, though the same intensity and perfectionism burns just as bright. Maybe it's just how we express love.

The thing is, whoever you're feeding will almost never care as much as you did that you seared the meat a little too hard or accidentally over whipped the cream into sweet butter because, maybe, you flew into a rage about how your mayor redirected coronavirus funds or that 19 of your last 20 pitches were turned down.

But perhaps save over-spicing the mapo tofu for when you want to dole out some real punishment.