Republicans who tried to overturn election vote against medals for Capitol, D.C. police 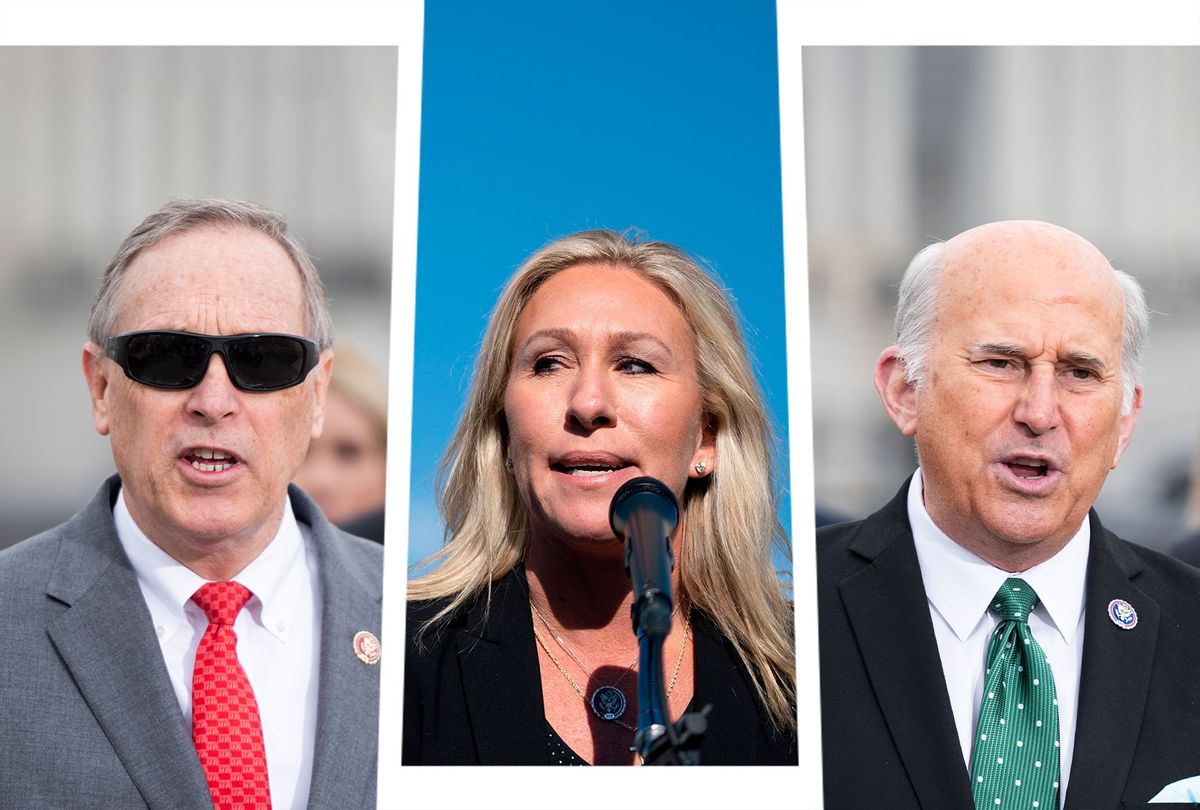 A dozen House Republicans on Wednesday voted against awarding Congressional medals to police departments that protected them during the deadly Jan. 6 Capitol riot.

The House voted 413-12 to award Congressional Gold Medals to the Capitol Police and D.C. Metro Police, as well as a third medal for the Smithsonian Institution to display in honor of other law enforcement agencies that assisted in response to the Capitol attack. The bill was scheduled for a vote last week but some Republicans used procedural measures to delay the vote. The resolution now heads to the Senate, which already voted to award a Congressional Gold Medal to Officer Eugene Goodman, who led rioters away from the Senate chamber.

House Majority Leader Steny Hoyer, D-Md., lashed out at Republicans who opposed the bill, accusing them of trying to "erase the events of January 6 and deny the responsibility of a far-right, insurrectionist mob incited by former President Trump."

The 12 GOP members who voted no featured an all-star cast of far-right Trump supporters: Andy Biggs of Arizona, Marjorie Taylor Greene of Georgia, Thomas Massie of Kentucky., Matt Gaetz of Florida, Louie Gohmert of Texas, Andy Harris of Maryland, Lance Gooden of Texas, Michael Cloud of Texas, Andrew Clyde of Georgia, Greg Steube of Florida, Bob Good of Virginia and John Rose of Tennessee. Their opposition was largely framed in terms of what they described as partisan language.

Every Republican who opposed the bill, except Massie, had objected to the counting of electoral votes from certain states after the pro-Trump mob stormed the Capitol. Five people were killed, including Capitol Police Officer Brian Sicknick. Two other officers died by suicide in the subsequent weeks. Biggs, the chairman of the House Freedom Caucus, was accused by Ali Alexander, who organized the "Stop the Steal" rally that preceded the riot, of having "schemed up" the event along with Rep. Paul Gosar, R-Ariz., and Rep. Mo Brooks, R-Ala. Biggs and Brooks have denied their involvement, though Biggs unsuccessfully sought a pardon from former President Donald Trump related to his role in the riot, according to CNN.

Some members of the group took issue with the use of the term "insurrectionists" in the resolution.

"On January 6, 2021, a mob of insurrectionists forced its way into the U.S. Capitol building and congressional office buildings and engaged in acts of vandalism, looting, and violently attacked Capitol Police officers," the resolution says.

"It's just offensive that we literally logrolled recognition of the Capitol Police," Gaetz told Roll Call, complaining that Democrats chose to "combine it with these editorial comments about the Jan. 6 sequence of events."

Massie told the outlet he worried that using the term "insurrection" may come up in "somebody's prosecution."

Other Republicans complained that the resolution referred to the Capitol as a "temple."

"The desecration of the U.S. Capitol, which is the temple of our American Democracy, and the violence targeting Congress are horrors that will forever stain our Nation's history," the resolution said.

"Calling this a temple is a little too sacrilegious for me," Massie said. "This is not a religion here. This is a government. We separate our religion from our government."

Harris said in a statement that he could not support "partisan charged language found in this bill."

Gohmert even circulated a competing bill obtained by Politico that did not mention the Capitol riot or Jan. 6. Gohmert's bill honored the three officers who "all passed in January 2021." Gohmert said in a statement that his bill "removed the speaker's false and politicized narrative." Politico called it the latest "effort by some of Trump's most hardcore backers to rewrite history" and described it as "totally bonkers and extremely dangerous."

Hoyer said in a statement that Gohmert's bill "insults the memory of the officer who was killed defending the Capitol and the two others who died as a result of the attack in its immediate aftermath, using language implying that the three officers did not lose their lives in the line of duty."

The statement added that "such disrespect for the heroes who courageously tried to protect the American people's Capitol is disgusting."

Rep. Jim McGovern, D-Mass., chairman of the House Rules Committee, told Politico that Republican efforts to minimize the events of Jan. 6 are "not only wrong, unforgivable, but unconscionable."

"There are a lot of raw feelings around here," he said. "To try to make believe it's something that it wasn't only increases the likelihood that it happens again."

McGovern also lashed out at members who delayed the vote.

"The fact that there is any member, I don't care what their political party, would want to delay providing a gold medal to Capitol Police who protected us on Jan. 6, it really is kind of disgusting," he told the outlet. "It shows the pettiness and the tone-deafness that's really shocking."