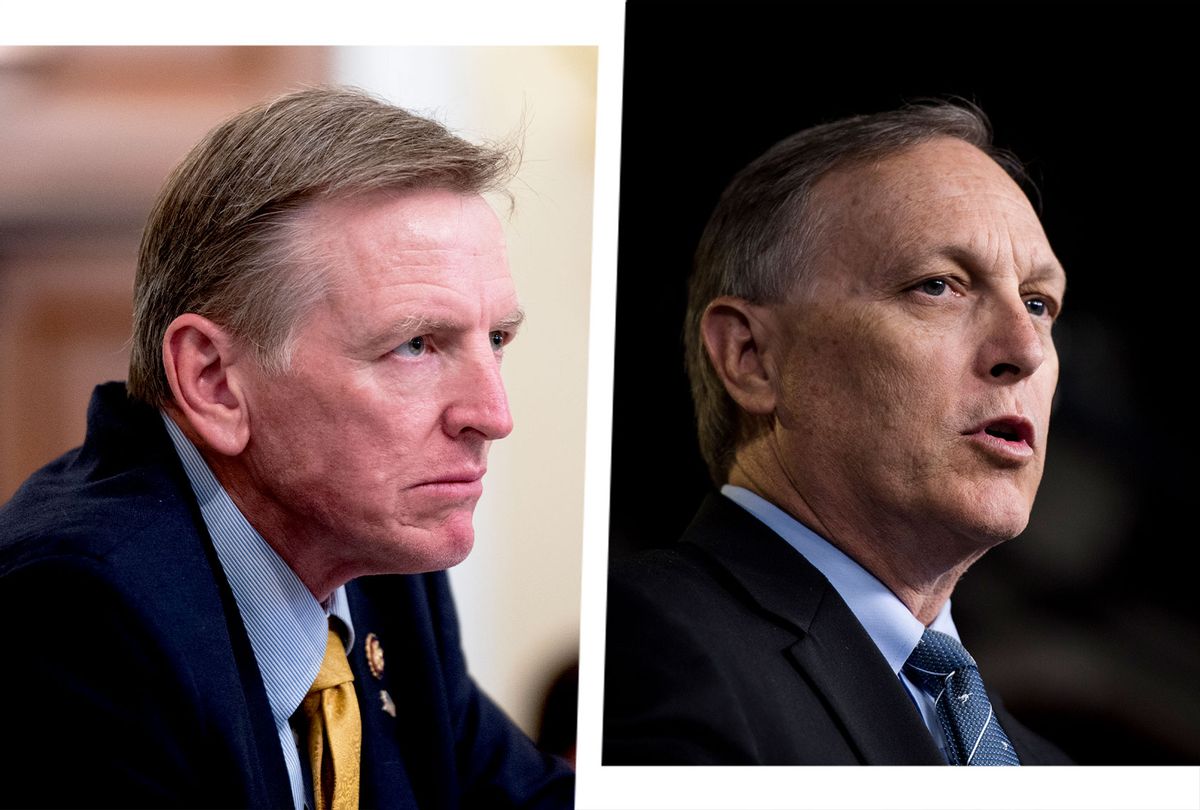 Arizona Republican Reps. Paul Gosar and Andy Biggs reportedly asked former President Donald Trump for pardons relating to their involvement in the events leading up to the Jan. 6 terrorist attack on the Capitol. He turned them down.

On Tuesday, CNN reported that the two Arizonans were among a number of GOP lawmakers who sought clemency in Trump's final days in connection to the rally in front of the White House that flowed into the deadly riot. The former president, who still faces an impeachment trial in the Senate for his own role in the insurrection, reportedly declined to grant the requests after a lengthy meeting with legal advisers over the weekend.

The concerns went beyond the elected officials who had promoted or attended the rally — including Gosar, Biggs and Rep. Mo Brooks of Alabama — and extended to conservatives who had helped organize and raise money for the event, CNN reported, including Trump's oldest adult son Donald Trump Jr. and his significant other Kimberly Guilfoyle, both of whom addressed the crowd.

Trump issued 143 pardons in a late-night blitz on Tuesday, but the Arizona congressmen were not among them, and neither were any of the outgoing president's family members. Ultimately, Trump did not pardon anyone associated with the rally or siege, likely because the Constitution limits the pardon power in cases related to impeachment. (After the attack, Trump had told the violent mob in a video statement, "We love you. You're very special.")

Itinerant right-wing blogger Ali Alexander, one of the key organizers and a driving force behind the nationwide "Stop the Steal" protests that led up to the rally, claimed in a number of since-deleted videos that he had collaborated ahead of the event with Gosar, Biggs and Brooks in an effort to put "max pressure on Congress." When the rioters breached the Capitol, lawmakers were debating the legitimacy of electoral votes from Gosar and Biggs' home state of Arizona, a challenge endorsed by both congressmen, forcing members and staff. Investigators have concluded that some of the attackers, inspired by unfounded accusations that Gosar, Biggs and Brooks had all parroted, had invaded the building with the intention of kidnapping and executing elected leaders, including former Vice President Mike Pence. Six people ultimately died as a result of the siege, including two Capitol Police officers.

In an interview with MSNBC's Joy Reid that aired on Tuesday, House Speaker Nancy Pelosi said that Trump, as a lead instigator of the failed coup attempt, was an accessory to murder.

"Presidents' words are important. They weigh a ton. And they used his words to come here," Pelosi said, referencing Trump's fierce speech just ahead of the riot, in which he implored the crowd several times to "fight."

The California Democrat added that if Trump and members of Congress were shown to have collaborated with attackers, they could potentially qualify as accessories to the crimes committed during the siege.

"The crime, in some cases, was murder," she said. "And this president is an accessory to that crime because he instigated that insurrection that caused those deaths and this destruction."

While some law enforcement officials, such as D.C. Attorney General Karl Racine, have said they plan to look into Trump's role in the attack as a criminal matter, none have indicated that he may face charges of accessory to murder.

Republicans have not spoken of Trump's actions in criminal terms, but a number of them have blamed him for the violence, including now-Minority Leader Mitch McConnell, who said earlier this week that Trump had "provoked" the insurrection.

"The mob was fed lies," McConnell said from the Senate floor on Tuesday. "They were provoked by the president and other powerful people. And they tried to use fear and violence to stop a specific proceeding of the first branch of the federal government which they did not like. But we pressed on."

Last week, Rep. Sean Patrick Maloney, D-N.Y., told MSNBC's Nicole Wallace that a lawmaker alleged to have shown members of the mob around the Capitol the day before the riot had engaged in "criminal behavior under federal sedition laws." While Maloney did not name the lawmaker, he said, "That's going to be a real story."