Was the Capitol raid an "inside job"? Some Democrats think so — and evidence is mounting

Democratic lawmakers have referred GOP colleagues to investigators, amid suggestions of "suspicious" visitors 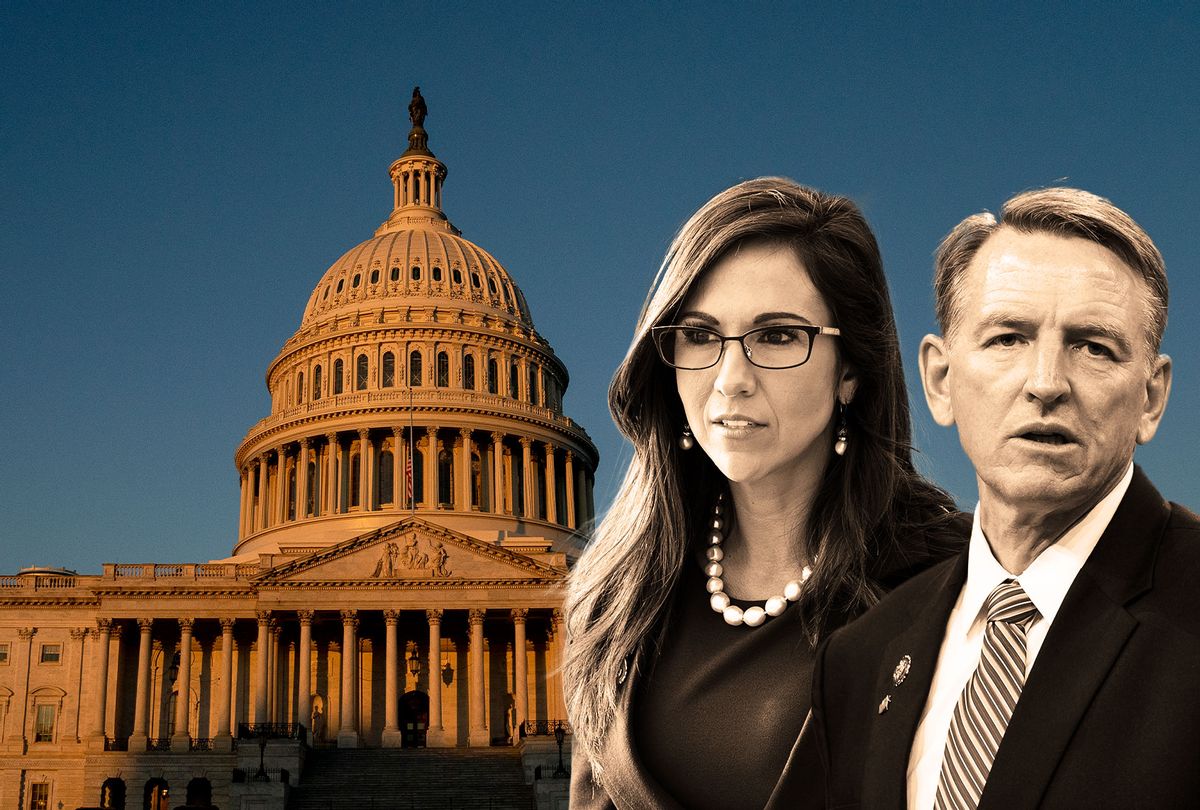 More than 30 House Democrats sent a letter to the acting House sergeant-at-arms on Wednesday calling for an investigation into "suspicious" groups of visitors inside the Capitol building the day before the Jan. 6 attack. Some of the lawmakers, the letter says, had encountered tour guests who later appeared connected with the next day's Stop the Steal event by the White House.

Some of the signees are military veterans "trained to recognize suspicious activity," the letter says, who witnessed "an extremely high number of outside groups" in the building on Jan. 5.

"This is unusual for several reasons," the letter continues, "including the fact that access to the Capitol Complex has been restricted since public tours ended in March due to the pandemic," prompting top staff to question the sergeant-at-arms about the activity that same day.

"The visitors encountered by some of the Members of Congress on this letter appeared to be associated with the rally at the White House the following day," the members wrote, adding: "Members of the group that attacked the Capitol seemed to have an unusually detailed knowledge of the layout of the Capitol Complex. The presence of these groups within the Capitol Complex was indeed suspicious."

The letter asks whether logbooks from that day include names of visitors admitted by their colleagues — who are not specified but assumed to be Republicans — and whether video logs documenting those visits are available. Pointedly, the group also asks whether law enforcement has also tried to access visitor information.

Ahead of the letter, several Democrats had previously, albeit somewhat cryptically, raised the possibility that preparations for the invasion extended into the halls of Congress, including among some of their fellow members. No one has yet offered hard evidence of outright collaboration or formal organization, but circumstantial evidence in the public record, combined with inside accounts, suggests that the plans unfolded for a number of weeks among a leaderless and to some extent coordinated network of like-minded people who converged at the same target on the same day.

Speculation about such coordination has been simmering online since the attack, but on Tuesday Rep. Mikie Sherrill, D-N.J., sent it viral, claiming in a Facebook video that she saw unnamed fellow representatives guiding what she characterized as "reconnaissance" tours in the Capitol the day before the attack.

Though Sherrill did not explain why she described the alleged Jan. 5 tours as "reconnaissance" for the deadly siege that played out the next day, she said in the video that she had passed her information to authorities.

"We're requesting an investigation right now with certain agencies," she told Politico. On Wednesday she joined the group that notified the Sergeant at Arms.

Rep. Tim Ryan, D-Ohio, chair of the subcommittee that oversees funding for the Capitol Police, offered more detail, saying that "a couple" of his colleagues seemed to fit Sherrill's description, and that this information had been passed to law enforcement as early as the night of the attack. Ryan added that "handfuls" of people had been escorted through the building on Jan. 5, and that clearly they were not "one-on-one" or "small family" tours.

"You look back on certain things and you look at it differently," said the Democrat, who told reporters the day after the siege that he would launch an investigation into the Capitol Police response.

These claims are at least somewhat plausible, based on the public record. A number of Republican elected officials supported and heavily promoted the rally, most specifically Rep. Paul Gosar of Arizona, who had coordinated for weeks with event organizers. One organizer cited Gosar and two other Republicans by name as helping foment a "maximum pressure" campaign on Congress.

Other Republican lawmakers have also drawn circumstantial suspicion, such as newly elected Rep. Lauren Boebert of Colorado, who has expressed admiration for QAnon conspiracy theories. Boebert's tweets about the location of Speaker Nancy Pelosi and others during the attack have led to calls for her arrest.

Speaking more broadly, many Republicans lent their support to the rally and its central cause: Objecting to the Electoral College votes. More than 140 representatives and a dozen senators had announced before the Jan. 6 joint session that they would object, and many of them, including Sens. Josh Hawley, R-Mo., and Ted Cruz, R-Texas, routinely promoted the false claims of election fraud that fueled the insurrection.

Some officials have suggested that the attackers displayed uncanny knowledge of the Capitol complex, perhaps indicating advance or insider access to the building. Sarah Groh, chief of staff to Rep. Ayanna Pressley, D-Mass., told the Boston Globe on Wednesday that panic buttons in the congresswoman's office appeared to have been ripped out of the wall.

"Every panic button in my office had been torn out — the whole unit," Groh said, explaining that the panic buttons had been installed because Pressley, one of the group of four Democratic congresswomen of color known as "the Squad," had received a number of death threats.

Also this week, Rep. Hank Johnson, D-Ga., told radio host Rashad Richey that he believed the attack was an "inside job."

These startling allegations have drawn more attention as law enforcement begins to sort through the chaos and arrest suspects, but they popped up last week as well. One senior Senate aide, asked by Salon last Thursday how the invaders found the Senate parliamentarian's office — an obscure space deep in the building where electoral votes were stored, and which the mob ransacked — said that it was a "fascinating question."

"Honestly, I don't know," the aide said. "They somehow got into every nook and cranny."

On Friday, House Majority Whip James Clyburn of South Carolina told CBS News that he believed "somebody on the inside" had helped the insurrectionists.

"They knew where to go. I've been told ... by some other congresspeople that their staff are saying that they saw people being allowed into the building through side doors," Clyburn said.

"Who opened those side doors for these protesters, or I call them these mobsters, to come into the building, not through the main entrance where magnetometers are but through side doors. Yes, somebody on the inside of those buildings were complicit in this," said the veteran Democratic leader.

Clyburn also observed that the rioters ignored the office marked with his name plate, but said that the unmarked office "where I do most of my work in, they were on that floor and outside that door," indicating insider knowledge. He added that police were "not just derelict. You could say they were complicit."

Other evidence comes from the attackers themselves. In a since-deleted video from December, Ali Alexander, self-styled right-wing provocateur and chief organizer of Stop the Steal, said that he had worked with Arizona Reps. Paul Gosar and Andy Biggs and Rep. Mo Brooks of Alabama on a plan to apply "maximum pressure on Congress while they were voting."

"It was to build momentum and pressure and then on the day change hearts and minds of congresspeople who weren't yet decided or who saw everyone outside and said, 'I can't be on the other side of that mob,'" Ali said, though he did not explicitly call for violence or an invasion of the Capitol building.

While social media posts show that Gosar's relationship with Alexander and Stop the Steal goes back at least to late November, a Biggs spokesperson told The New York Times that the congressman was "not aware of hearing of or meeting Mr. Alexander at any point," and "did not have any contact with protesters or rioters, nor did he ever encourage or foster the rally or protests on Jan. 6."

Alexander also claimed in a Tuesday afternoon interview with Alex Jones that the Secret Service had escorted the two of them from the rally to the Capitol, but they were waylaid en route.

"The fact is that you and I were escorted out by Secret Service in order to lead the overflow crowd of our event with the president to the U.S. Capitol peacefully," Alexander claimed, adding that a 10-minute speech on the way saved them "by the grace of god" from "the front line on the U.S. Capitol."

"And we would have been blamed," he added.

Jones has also claimed that the White House set up a Secret Service escort for him, but said that he and Alexander, like President Trump, never found themselves at risk — they broadcast instead from a landmark rooftop with a clear view of the chaos.