How sex addiction is (wrongly) used as a cover for violence 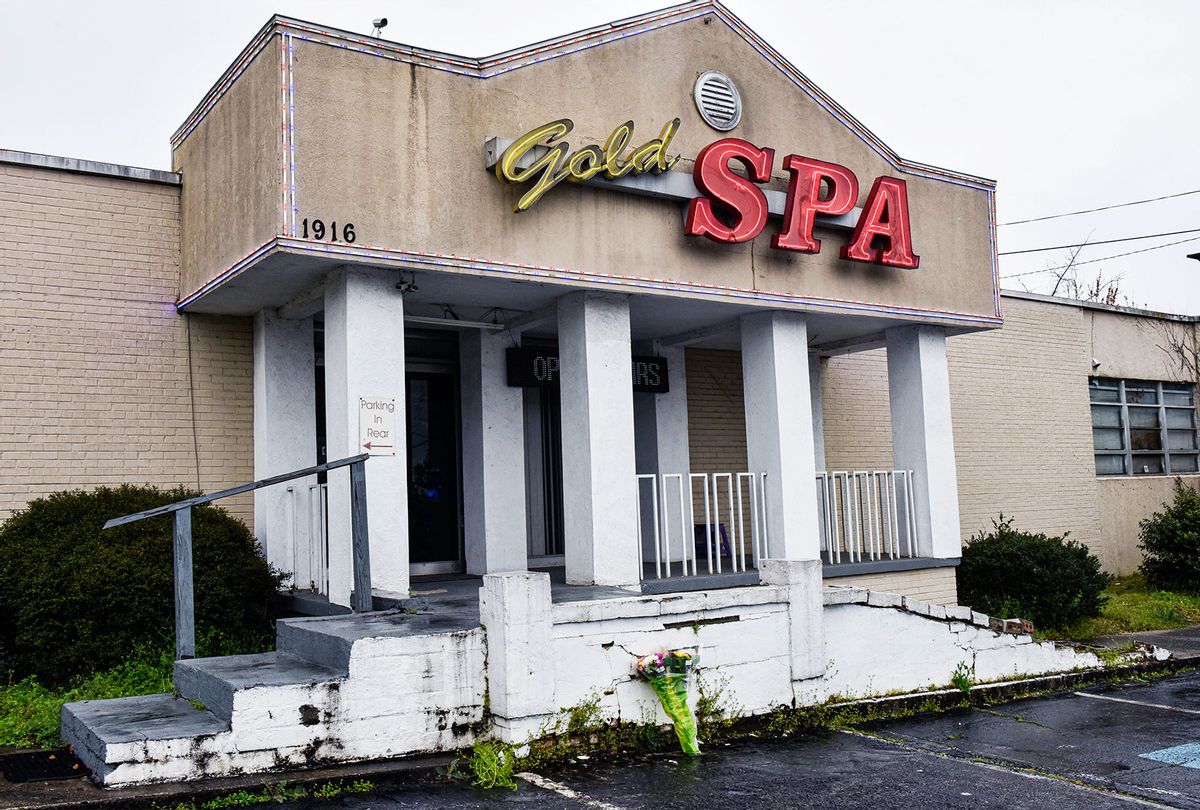 The site of Gold Spa, is viewed on March 17, 2021, one of the three Asian massage parlors that was hit by deadly shooting attacks in Northeast Atlanta, Georgia on March 16, 2021. - Six Asian women were among eight people shot and killed at spas around the US city of Atlanta, raising fears March 17, 2021 that it might be the most violent chapter yet in a wave of attacks on Asian-Americans. A white man is in custody on suspicion of staging all three attacks, police said as a Georgia state Democratic party leader suggested the attack matched "a pattern" of violence on Asian-Americans during the pandemic. (VIRGINIE KIPPELEN/AFP via Getty Images)
--

More details are surfacing about Robert Aaron Long, the 21-year-old white man who has been charged with killing eight people, and what motivated the alleged gunman to take so many lives at three separate spa shootings outside of Atlanta, Georgia, on March 16. Seven of the gunman's eight victims were women; six were identified as Asian and at least four of those killed were of Korean descent. The victims of the shootings who have been identified by time of publication, according to CNN, are Delaina Yaun, Paul Andre Michels, Xiaojie Tan, and Daoyou Feng. One man, Elcias Hernandez-Ortiz, survived.

These details, coupled with the influx in hate incidents against Asian Americans over the last year, have prompted speculation that the murders were racially motivated. Yet hours after the police arrested Long, who took responsibility for the shootings, he was reportedly pushing a new narrative about motive — specifically, that he suffered from "sex addiction."

At a press conference on March 17, Cherokee County sheriff's deputy Captain Jay Baker reported that Long said he "wanted to eliminate" his "temptation" by killing eight people who worked at establishments that he reportedly saw as "an outlet" for his alleged addiction to sex.

"He said it was not racially motivated," law enforcement officials said in a statement.

But the narrative unfolding about Long is raising ire among mental health professionals, who say that sex addiction doesn't drive its sufferers to violence. Likewise, many psychologists and therapists have been privy to a long debate to recognize sex addiction as an actual psychological disorder in the first place, and are wary of trivializing it or misapplying the label to those who are using it as a scapegoat for violence.

Indeed, this isn't the first time that sex addiction has been weaponized into an excuse for a horrific crime. Disgraced Hollywood mogul Harvey Weinstein, now in prison for one count of third-degree rape and committing a criminal sex act, tried to excuse his behavior as the work of a "sex addict" — a diagnosis psychologists disagreed with as an explanation for his behavior. Serial killer Ted Bundy claimed his so-called sex addiction to pornography was what led him to rape and murder women. Ariel Castro, who help three teenagers captive in his Cleveland basement, also cast blame on his alleged porn and sex addiction.

Notably, the American Psychiatric Association did not include it in a 2012 updated version of "The Diagnostic and Statistical Manual of Mental Disorders" (DSM), which is considered the "bible" of diagnostic categories for mental health in the United States. The manual is updated every few years, and is what mental health professionals rely on when giving a diagnosis. Technically, "sex addiction" is not an official diagnosis, per the DSM.

That's not to say that compulsive sexual behavior disorder isn't real — rather, that killing people is not part of the disorder as far as any experts are concerned.

"Homicidal behavior has not been found by any study I am aware of occurring at a higher frequency among men who feel sexually out of control and label their experience as having an identity of a sex addict, or who have been a patient at a sex addiction treatment center for their consensual sexual behavior," Doug Braun-Harvey, a sexual health author, trainer and psychotherapist, told Salon via email.

Dr. Stefanie Carnes, president of the International Institute for Trauma and Addiction Professionals, agreed. She added that she fears that sex addiction is being mislabeled once again to give an excuse to a violent individual.

"Sex addiction or compulsive sexual behavior disorder does not typically cause violent tendencies," Carnes said. "When somebody actually kills somebody we're dealing with sociopathy or psychoticism, a psychotic behavior — something along those lines, typically."

"It's not the same thing," she said, noting one of the main concerns about adding compulsive sexual behavior disorder to the DSM is that it could "be used in court cases to get sex offenders and violent individuals a reduced sentence."

"It's an issue because we really do need a diagnosis for it, so that it does legitimize the disorder and we can work on de-stigmatizing and getting people treatment," Carnes said. She said that falsely equating sex addiction with violence could be harmful to people who actually have compulsive sexual behavior disorder.

There appears to be a correlation between Long's faith and views on sex. The New York Times reported that Long's former roommate, Tyler Bayless, corroborated Long's alleged addiction. Bayless told The Times that it "tore him [Long] up inside," in part because of his Christian faith. "I'll never forget him looking at me and saying, 'I'm falling out of God's grace,'" Bayless said.

According to The Times, Long belonged to the Crabapple First Baptist Church. He also reportedly got treatment at HopeQuest, a Christian addiction center.

As Salon writer Ashlie Stevens has reported extensively, there is a massive focus on purity culture in Evangelical circles. And massage parlors have long been demonized by many conservative religious groups. For example, a religious anti-pornography group called Exodus Cry has publicly decried "Asian massage parlors" as "often fronts for brothels, prostitution, and trafficking."

Over the next weeks and days more details will emerge about Long's case, but one thing appears to be clear: psychologists agree that murder has nothing to do with sex addiction, and say that it is time to stop using "sex addiction" as an excuse for abuse, violence and hate.