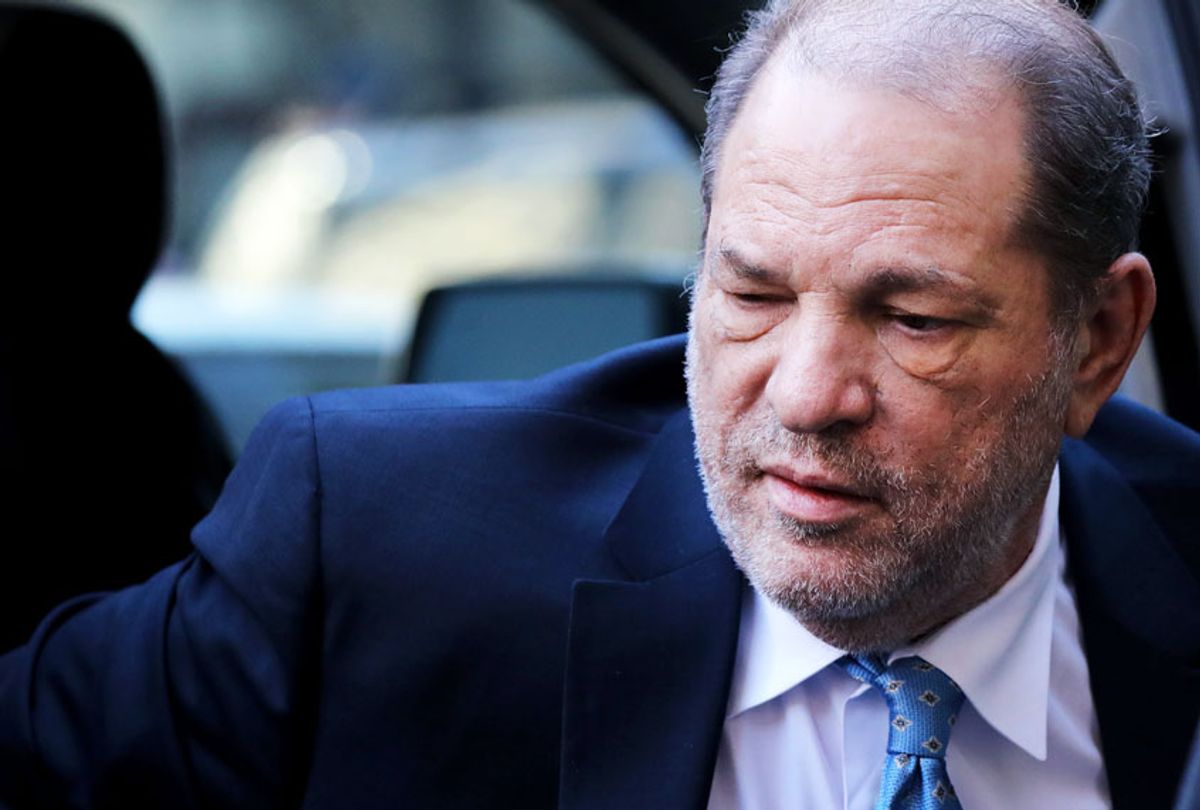 Harvey Weinstein enters a Manhattan court house as a jury continues with deliberations in his trial on February 24, 2020 in New York City. (Spencer Platt/Getty Images)
--

This is a breaking news update. Stay tune to Salon for additional information.

Disgraced film producer Harvey Weinstein has been sentenced to 23 years in prison by a New York judge after being convicted of one count of third-degree rape and one count of committing a criminal sex act.

Weinstein's attorneys pleaded for the statutory minimum sentence Monday, arguing that their client "cannot walk outside without being heckled, he has lost his means to earn a living, simply put, his fall from grace has been historic, perhaps unmatched in the age of social media. Deserved or not, this is certainly a unique and extremely severe consequence that Mr. Weinstein had to endure, and in the age of social media and given his fame, virtually unrivaled when compared to any other defendant in the state of New York if not nationally."

But Assistant District Attorney Joan Illuzzi made the case for a much stiffer sentence Friday in her own sentencing memorandum. Illuzzi argued that in addition to the rape and criminal sex act convictions, Weinstein's alleged history of sexual harassment, assault and bullying "viewed in the totality, establish that throughout his entire adult professional life, defendant has displayed a staggering lack of empathy, treating others with disdain and inhumanity."

Under sentencing guidelines, the once powerful Hollywood mogul could have received as many 29 years in prison and as few as five.

Weinstein was convicted last month of raping former actress Jessica Mann in 2013 and committing a criminal sex act against former production assistant Miriam Haley (then Mimi Haleyi) in 2006. Four other women accused of Weinstein of sex crimes during the trial, though they were unable to press criminal charges because the statute of limitations had passed. These included model Lauren Young, who claimed that Weinstein groped her and ejaculated in her presence; "The Sopranos" star Annabella Sciorra, who alleged that Weinstein raped her; and former waitresses Tarale Wulff and Dawn Dunning, who both accused Weinstein of sexually assault.

Roughly 100 women in total have accused Weinstein of sexual misconduct, who was charged with one count of rape and one count of sexual assault in a separate trial scheduled to begin in Los Angeles.

Since the start of his New York trial, Weinstein has seemingly displayed a number of health problems. He would often be seen entering and exiting the courtroom with a walker, though he did not use one in jail following his trial. Doctors reportedly inserted a stent into Weinstein's heart last week. The former producer later suffered a concussion during a fall Sunday at Rikers Island jail, his publicist said.

Documents unsealed Monday revealed Weinstein's response as the accusations against him began to mount. He reached out to a number of fellow business leaders during that period, including Apple CEO Tim Cook, Amazon CEO Jeff Bezos and Bloomberg L.P. owner Michael Bloomberg. In a letter to Bloomberg, Weinstein said that "my board is thinking of firing me. All I'm asking for is, let me take a leave of absence and get into heavy therapy and counseling whether it be in a facility or somewhere else, and allow me to resurrect myself with a second chance."

Weinstein described himself as addicted to sex and anger and as "suicidal" during this period. His brother Bob Weinstein, who worked with Harvey as a producer, was unsympathetic, writing in an email that "U deserve a lifetime achievement award for the sheer savagery and immorality and inhumanness, for the acts u have perpetrated. Oh I forgot. They were all consensual."

The claims against Weinstein motivated women around the world to come forward with allegations of sexual harassment at the hands of powerful men, catalyzing the decades-old #MeToo movement.