Harvey Weinstein accusers question his hospitalization, use of a walker post-conviction

The film mogul still has a Los Angeles trial to go through, and the women known as the Silence Breakers are ready 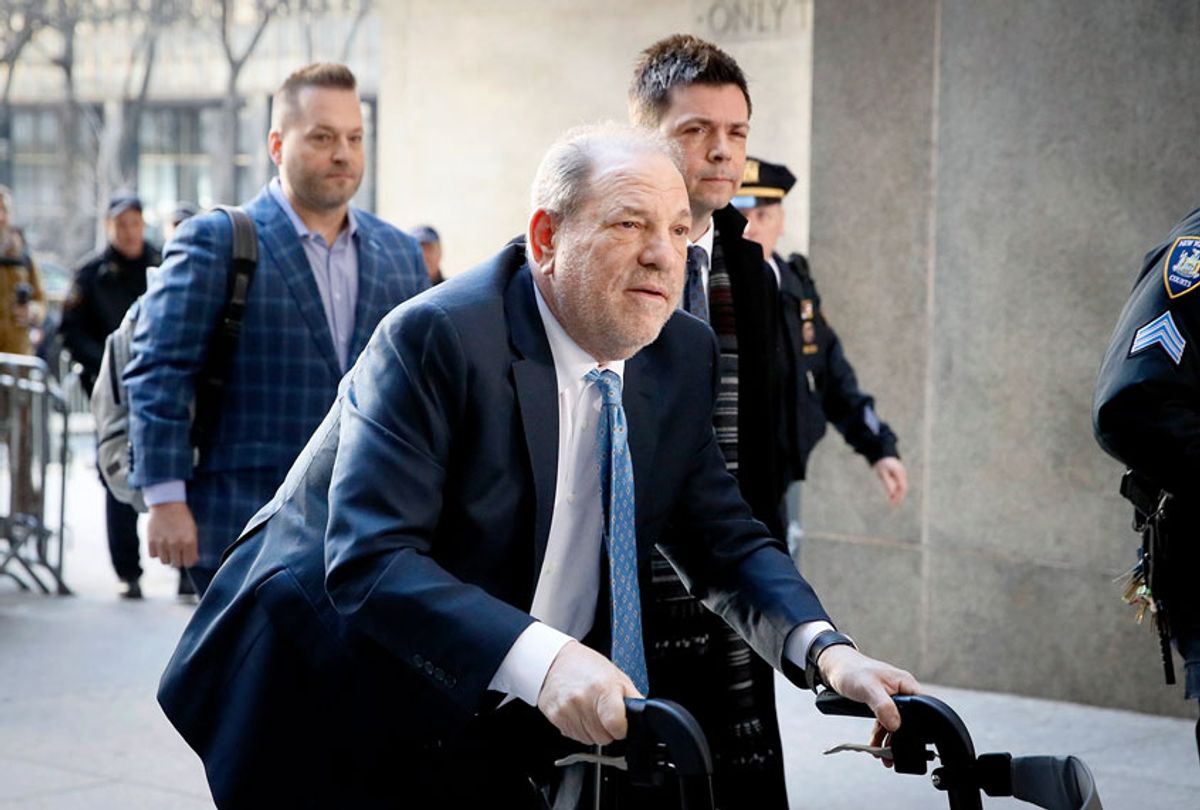 Although Harvey Weinstein was recently convicted of rape and a criminal sexual act, his time in the hot seat hasn't ended. He still has to stand trial in Los Angeles, and 11 women who accused the disgraced Hollywood mogul of sexual misconduct in that case spoke out on Tuesday.

A group known as the Silence Breakers gathered at Los Angeles City Hall on Tuesday to discuss the Weinstein case. The women included Caitlin Dulany, Jessica Barth, Katherine Kendall, Larissa Gomes, Lauren O'Connor, Lauren Sivan, Louise Godbold, Louisette Geiss, Melissa Sagemiller Nesic, Sarah Ann Masse and Rosanna Arquette. During the press conference, they discussed how Weinstein was hospitalized for chest pains after he was convicted in New York on Monday of a criminal sexual act and third-degree rape. He is also facing charges of rape and sexual assault in Los Angeles.

Sivan pointed out that Weinstein was being treated differently because of his wealth, telling reporters, "I think we should all take a moment to realize that if that this wasn't Harvey Weinstein and was just anyone that didn't have money and power and couldn't afford world's best attorneys, they would be in jail, they wouldn't get to go to the hospital."

Geiss observed that Weinstein is "a very good actor" and added, "this is a man who knows how to manipulate the press and clearly he's done so with his iconic walker; let's just say I know women who are literally dying who are also victims and I say let's give them the help. If he's got to go to the hospital it should be in jail, that kind of hospital, not one where he has his own suite." Since the start of the trial Weinstein had been seen using a walker, with some speculating that he was using it in a bid for sympathy or to remake his image into that of a sickly man.

The women also spoke out against the street art that has appeared in Los Angeles with Streep's face and the words "She knew," insinuating that the acclaimed actress was aware of Weinstein's predatory actions but said nothing to prevent them.

Kendall told reporters that the art "angers me" because "it's just taking it right off of Harvey again and the men that were complicit. To think that because she did a movie with him she knew all of his gossip is preposterous, he was probably busy doing her work and people can have things hidden from them."

Masse made a similar point, arguing, "Just because a man abuses hundreds of women doesn't mean that he abuses every woman that he's ever worked with, so it is possible for a woman to have worked with him and be treated with respect by him. I'm sure Meryl Streep didn't know. She's been very supportive and when he tried to use her in the press against us, she came out and repudiated it, so let's not make this about the women."

Streep told The New York Times in 2018 that when she first learned about Weinstein's alleged actions, it "really underlined my own sense of cluelessness, and also how evil, deeply evil, and duplicitous, a person he was, yet such a champion of really great work." She also said that she experienced a lot of "inexcusable" behavior when she was "young and pretty" but added, "Now that people are older, and more sober, there has to be forgiveness, and that's the way I feel about it."

The following month, when Weinstein attempted to use her name and one of her statements to discredit a sexual misconduct lawsuit against him, she distanced herself from him in a statement.

"Harvey Weinstein's attorneys' use of my (true) statement — that he was not sexually transgressive or physically abusive in our business relationship — as evidence that he was not abusive with many OTHER women is pathetic and exploitive," Streep wrote at the time.