Pramila Jayapal, Cori Bush lead meeting with Ron Klain, tell Biden fight for $15 "is a matter of life and death" 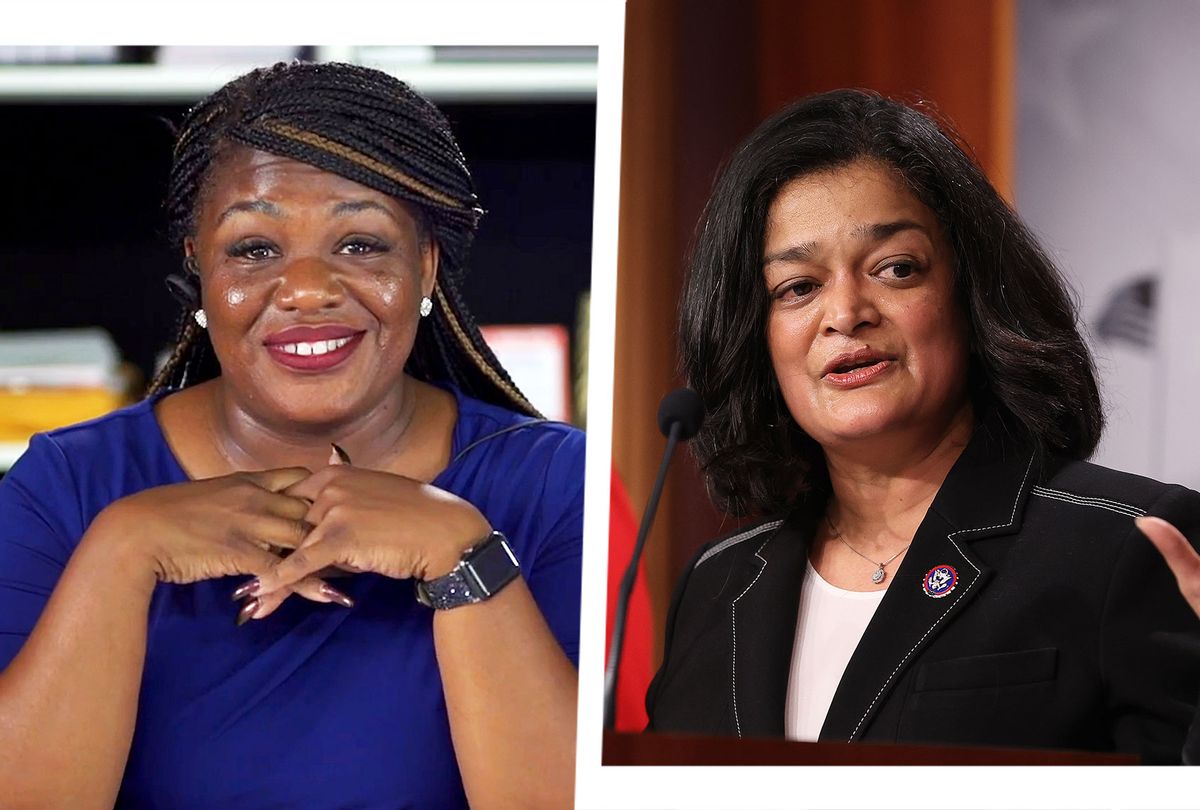 The path forward for the popular $15 minimum wage measure has been uncertain since the unelected Senate parliamentarian advised lawmakers late last month that the pay increase would run afoul of the arcane rules of budget reconciliation, the filibuster-proof process congressional Democrats used to pass the American Rescue Plan without any Republican support.

Rejecting vocal demands from progressive lawmakers and grassroots activists, Vice President Kamala Harris and Senate Democrats refused to overrule the parliamentarian on the $15 minimum wage, despite the official's complete lack of constitutional authority.

Jayapal, the chair of the CPC, told Politico that while "there was no consensus around" the best strategy, the progressive lawmakers "got a very clear sense that this is a real commitment for the White House, and they're very willing to work with us on what that looks like."

The Washington Democrat offered a similar assessment on Twitter, calling the meeting "productive" and welcoming "the opportunity to share ideas on how we pass the boldest legislation through Congress so every American has the opportunity to thrive — not just survive."

"We look forward to regular collaboration," Jayapal added, "and to continuing these conversations at a second meeting this week."

The meeting itself — also attended by Reps. Barbara Lee, D-Calif., Ilhan Omar, D-Minn., Mark Pocan, D-Wis., and Cori Bush, D-Mo. — was viewed as a reflection of the growing influence of the nearly 100-member CPC as well as the more moderate Biden administration's approach to dealing with the Democratic Party's left flank, which the Obama administration frequently derided, alienated and dismissed.

"A few years ago, the group was viewed as a bunch of radicals with no clout," Politico noted, referring to the CPC. "Now they're flexing and commanding the attention of the White House. Biden called Jayapal after the American Rescue Plan passed, and she told him she wants these kinds of meetings to happen regularly."

Following Wednesday's meeting, Bush — a freshman member of Congress and progressive firebrand — wrote on Twitter that she asked Klain "to share what's in my heart with the president: the fight for at least $15 is a matter of life and death in St. Louis."

"Poverty is killing us," Bush added. "We agreed to work together on this. Thank you, Mr. Klain."

In an analysis earlier this month, the Economic Policy Institute estimated that raising the federal minimum wage to $15 an hour by 2025 would lift around 3.7 million people in the U.S. out of poverty.

In addition to pressing Klain on the minimum wage, progressive lawmakers also stressed the importance of making permanent key elements of the American Rescue Plan, such as the law's year-long expansion of the child tax credit. Analysts have predicted that the temporary policy would cut child poverty in half, meaning that child poverty could double in 2022 without further action from lawmakers.

"The American Rescue Act is a big step forward in the fight to end childhood poverty — but the fight does not stop there," Lee tweeted Wednesday. "We must protect all children by making the expanded Child Tax Credit permanent."

Politico reported that progressives also pushed for a commitment that Biden's coming jobs and infrastructure plan "will address not only transportation but climate change, healthcare, and so-called family infrastructure, things like child care and paid leave."

Echoing the concerns of progressive climate groups, Jayapal warned the Biden administration not to ditch bold climate proposals in a likely futile attempt to win bipartisan support for the new package, which the White House is reportedly considering breaking up into as many as three separate bills.

"We can either go green, or we can go bipartisan, because I just don't think that Republicans are ready to have a transformative package," Jayapal told Politico. "And so I said that at the White House."