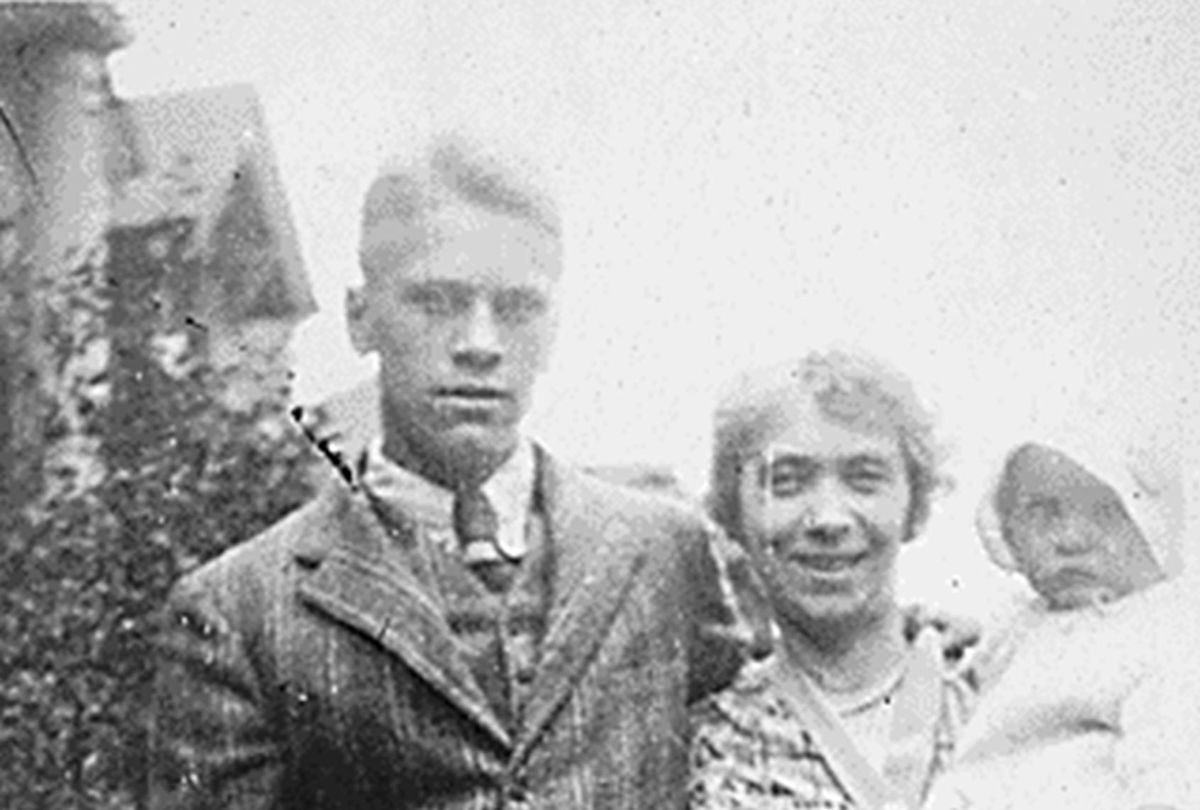 One recent president — at least relatively recent, in historical terms — wasn't born rich. He was raised in the Great Depression as an ordinary middle-class teenager. During his teen years in his Midwestern hometown, he made money by flipping burgers and washing dishes at a restaurant across the street from his high school. He liked to listen to big-band jazz on the radio while he worked. Many scenes from his life wouldn't have been out of place in a Normal Rockwell painting or a black-and-white sitcom.

One day he noticed a large middle-aged man staring at him. He tried to focus on his job, but the lurker was making him nervous. Eventually the mystery man introduced himself. His name was Leslie King and he had a secret to share: He was the young man's actual father, although he hadn't been around to raise him.

The teenage boy went out with King and his wife to a nearby restaurant, as Donald Holloway, curator of this future president's museum, tells the story to Salon. "They talk about football, about a variety of different things, but then King asks whether Leslie Jr. [the boy's original name] will come back with him to Wyoming." The boy didn't have to think about it more than a second: The answer was no. He'd had an archetypal all-American upbringing, he was a hard-working student and a high school athlete, and he didn't want to uproot his current life to go away with a father he had never known.

Many years later the future president recalled that by that he had already learned "indirectly, by inference" that the man he knew as his father wasn't his biological parent. Yet he always viewed that man as his dad, and eventually took his name. As you probably know, we've never had a president named Leslie King Jr. — but we did have one named Gerald R. Ford Jr., who named himself after his stepfather.

That's an interesting American tale, and essentially unique in the annals of the U.S. presidency. But neither the elder nor the younger Gerald Ford is the hero in this story. That would be Dorothy Ayer Gardner, the younger Ford's mother, who ended her abusive relationship with the cruel and violent Leslie King shortly after she married him in the 1910s, and got a divorce in an era when domestic abuse was rarely discussed in public and divorce — especially for women — was often seen as a mark of shame.

According to Holloway, King became physically, verbally and psychologically abusive toward Gardner soon after they got married. He insulted and threatened her, slapped and beat her and tried to keep her away from her family. Within days of their son's birth, he reportedly threatened her with a knife, and she'd had enough. In Gardner's baby book of the young Leslie Jr. (soon to be Gerald), the boy's "first outings" were train rides to a better life in the Midwest. After a hotly contested (and very public) divorce, a judge ordered that King should pay Gardner alimony. He never did, although his family was wealthy and could easily afford it. It wasn't until the future president was an adult that he was able to help his mother find a good lawyer who got the deadbeat King thrown in jail, which incentivized him to pay a settlement.

Abusive relationships of all kinds have always been extremely difficult to leave. As we honor Women's History Month, it is worth examining how Gardner raised a future American president — one who helped heal the nation after Richard Nixon's 1974 resignation — by defeating an abuser more than a century ago, at a time when social mores were far more patriarchal and misogynistic than they are today.

"First of all, it took a long time to recognize domestic violence as domestic violence," Stephanie Coontz, a historian at Evergreen State College and director of research at the Council on Contemporary Families, explained to Salon. As late as the 19th century some state courts ruled that in certain situations a man was within his rights to beat his wife, although by the close of that century domestic abuse was widely considered socially unacceptable. Even so, there were still "experts" who argued that such abuse could be provoked, or at least understandable, a mindset that has not entirely disappeared today.

"We have a long, long history in America of tolerating domestic abuse, of psychiatrists who said that the woman was too efficient and aggressive and that threatened the man," Coontz told Salon, adding that some people argued that physical abuse "restored the marital equilibrium." Despite these prejudices, it was possible for an abused woman to seek a divorce, but exceptionally difficult: Courts might deny her petition if she had fought back in any way, and therefore did not have "clean hands."

Gardner was white and came from a family of means — privileges that many other women did not possess, then as now — but she was still taking a "tremendous risk." Women often bore a stigma of being seen as responsible for divorce, and perhaps even of being unfaithful or having some other reason to be ashamed.

Salon reached out to two of Gerald Ford's nieces, who described the late president's mother as a woman who did not share many details about her experiences. They said she had taught the young Gerald great respect for women, and told her female relatives to stand up for themselves.

Julie Foster is the daughter of one of President Ford's three half-brothers from his mother's marriage to Gerald Ford Sr., in her case a Michigan state legislator named Tom Ford. "My grandmother was a very strong woman," Foster told Salon. She recalls being told by her mother that her grandmother had had a "beautiful wedding," followed by a pattern of abuse that started on the wedding night. In raising four boys, Foster said, her grandmother, "handled them and demanded respect, being polite and kind." Her mother once told her that when Gardner saw "Jerry" — the future president — developing a temper, "she addressed that right away, because she saw that in Jerry's father. She was not going to have Jerry be like that. She made him work on not having that short temper."

Linda Burba, whose father, Richard Ford, was the last of the Ford brothers to pass away, also said that her grandmother did not directly discuss her past with her. (Both she and Foster had also not heard the story about the knife until this interview.) She thought of Betty Ford, who would later use her platform as a president's wife to discuss her struggles with alcoholism.

"It would be akin to anybody talking about alcoholism prior to my Aunt Betty making it public in homes across America," Burba told Salon. "They hid the secret. It was just the way it was with domestic abuse," especially when it came to discussing it with children. "That's why I'm in awe of her strength." Burba speculated that this strength came in part from Gardner's lonely role as a "mama bear protecting her child."

Credit also belongs to Gerald Ford Sr., whom the future president always thought of as his real father. Gerald Sr. treated his stepson exactly as he did his three biological sons, and served as a role model for Ford. As V. Scott Kaufman, a historian at Francis Marion University who wrote a biography of Ford, told Salon, the elder Ford was a businessman and a staunch Republican. He opposed President Franklin Roosevelt, a Democrat, and his son shared his father's disdain for FDR's liberal New Deal economic policies. He taught his sons that if they worked hard and followed an old-fashioned ethical code, they could be successful and happy.

It must be noted here that Ford's presidency was something of a mixed bag, starting with his decision to pardon Richard Nixon for the many likely crimes he committed during the Watergate scandal. Ford was an old-fashioned center-right Republican, but also a decent and honorable man who sincerely tried to navigate any number of challenging issues during his brief tenure in the White House. He was also the last Republican president before Ronald Reagan began pushing the party toward the far right, whence it has never returned. (And he will probably always be the answer to a trivia question: Which U.S. president was never elected to nationwide political office?)

After Jimmy Carter narrowly defeated Ford in the 1976 election, he took the rare step of thanking his defeated opponent during his inaugural address: "For myself and for our nation, I want to thank my predecessor for all he has done to heal our land." Even before he and Carter became good friends in their post-presidential lives, he could inspire that kind of respect.

Yet in the end this is not a story of partisan politics. Anyone, from any background, can be subjected to abuse, or can benefit from an abuse survivor's strength. Everyone who fights these battles, in their own way, creates the possibility of survival, healing and growth for others. One of these heroes was a woman who did that at a time when it was especially difficult, and while raising a boy into a man who became a college football star, a Navy veteran, a congressman, a vice president and president.

Years after that traumatic encounter with the biological father he never knew, Gerald Ford recalled that one of the most difficult parts was walking home in the evening and knowing he would have to tell his parents what happened. They answered his questions about the past and reassured him that he was loved. The future president still cried himself to sleep that night, as he told the story later, but got up the next morning and moved on with his life.