Republicans have perfected the troll two-step: The art of being a jerk and then playing the victim

Step one: Say or do something wildly offensive. Step two: Whine that you’re being “canceled.” Bingo, it’s payday! 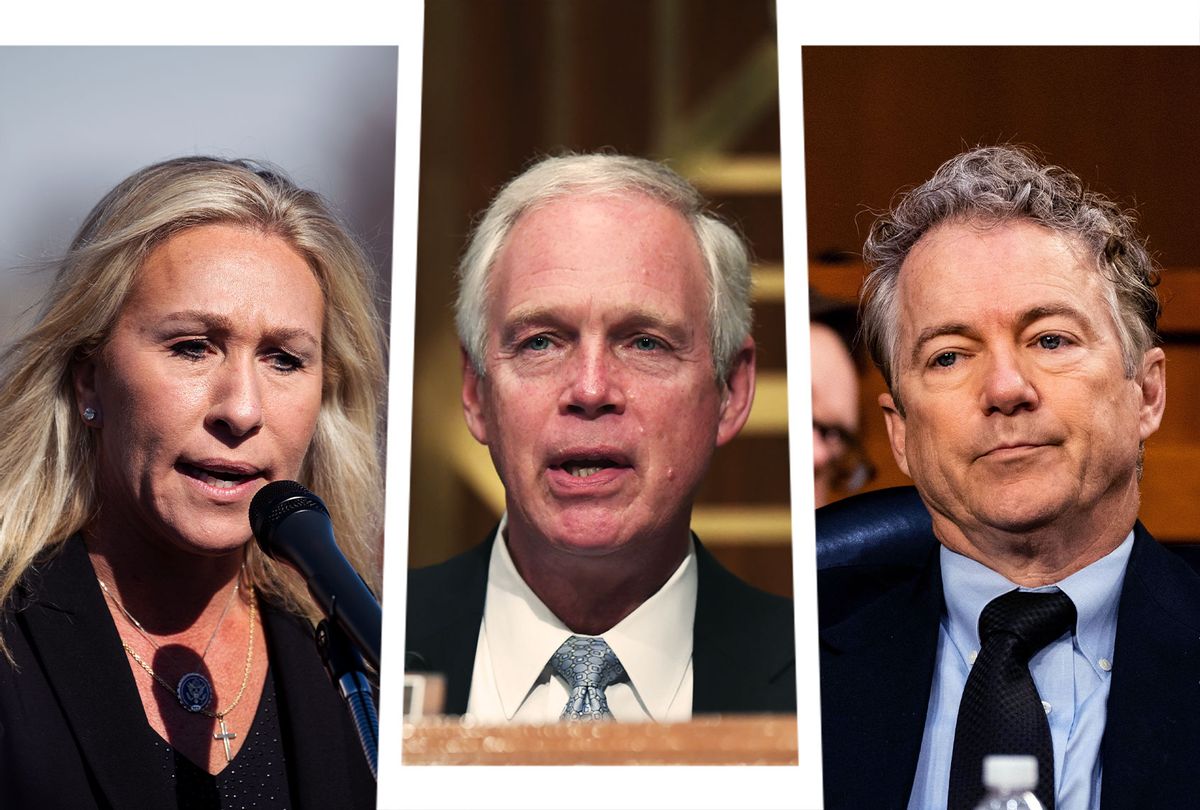 Donald Trump may be off at Mar-A-Lago throwing childish tantrums on his golf course, but his legacy lives on with Republicans, who are increasingly realizing that the best way to appeal to GOP voters is to ape his strategy of acting more like a shock jock than a politician.

Beyond just acting like crude bigots and jerks, the real goal is to rake in the cash in the aftermath of the outrageous behavior. The politician plays the victim of "cancel culture," thereby sanctifying whatever gross thing they said or did with the holy water of "free speech," which is merely coservative code for the "right" to be free of any pushback or criticism.

Call it the troll two-step. First, draw a huge amount of negative attention from progressives and the press by saying racist things or otherwise acting like a pig. Then, whine about how you're being "canceled" — even though your critics have no power to actually silence you — and bathe in the sympathy (and often dollars) generated by the victim-tripping right wing crowd. The best part? You don't even have to defend the indefensible thing you said or did, because you've now successfully changed the subject to a vapid debate over whether your "rights" are being violated.

Republican Sen. Ron Johnson of Wisconsin, who is up for re-election in the 2022 midterms, has been performing the troll two-step in recent days with ugly comments that are both racist and making excuses for the insurrectionists Trump sent to overrun the Capitol.

The whole thing started earlier this month when Johnson was interviewed on the right wing Joe Pags show, and claimed that he wasn't afraid of the insurrectionists because "I knew those were people that love this country, that truly respect law enforcement, would never do anything to break the law." It was a self-evidently ridiculous statement, since the crowd was attempting to overthrow a legal election and were so violent towards the police that one died from the attack, two others committed suicide shortly thereafter, and 140 were injured, some quite severely.

But Johnson wasn't done, and instead threw some racism in for good measure, claiming that if "those were tens of thousands of Black Lives Matter and Antifa protesters, I might have been a little concerned." This, despite research showing that no one was hurt at 98% of Black Lives Matter protests, and when there was violence, the police often started it or made it worse.

Luckily for Johnson, he is spared from having to actually defend his own racist comments because the "cancel culture" nonsense means he can instead talk about his alleged victimization at the hands of imaginary leftist censors. After Johnson was predictably called out by progressives, including his Senate colleague Sen. Bob Menendez, D-N.J., Johnson joyfully embraced his victimization narrative. "I Won't Be Silenced by the Left," blared the headline at the Wall Street Journal over an op-ed written by Johnson, in which he whines about progressives using "the worst possible accusations to silence anyone who challenges their left-wing agenda."

Note, of course, that this alleged champion of free speech is complaining not about being imprisoned or censored in any way, which has not happened, but that other people are using their own free speech to criticize him. As usual, "cancel culture" complaints are not defenses of "free speech," so much as they are conservatives asserting a unilateral right to say whatever they wish without criticism.

Johnson kept up his victim trip over the weekend, going on Fox Business Sunday to whine that liberals "reflexively play the race card primarily to silence their critics or silence anybody that they don't want their viewpoint spread around." Yet despite the power he attributed to "the race card," his voice continued to be broadcast to a national audience, disproving his allegations of being "silenced."

It's important to note that in his original interview with Pags, Johnson prefaced his remarks with, "this could get me in trouble," a comment he claims was made in dread but was clearly was more of a wish that came true. For right-wing grifters and politicians alike, being "in trouble" — i.e. getting liberal criticism — is the best possible thing. All the base cares about these days is "triggering the liberals,"  and now Johnson's credentials as a liberal-triggerer have been nicely burnished.

Johnson is only the most obnoxious recent example, but the sad truth is the troll two-step is turning into a primary — if not the primary — method that Republican politicians use to get attention, adoration, and most critically, campaign donations. Witness Sen. Rand Paul, R-Ky., playing the game regarding mask-wearing on Fox News last week:

Rand Paul tells Tucker Carlson he was running on a treadmill without a mask recently, prompting "some Karen" to complain about him pic.twitter.com/paXgt49wfd

Step one: Do something deliberately offensive that is guaranteed to get a negative response. Step two: When the provocation works and someone reacts, play the victim to much acclaim and sympathy on right-wing media. Rinse, repeat. Bonus points for continuing to redefine "Karen" away from its original definition of "racist white woman" to a sexist term to shame women for setting boundaries, no matter how reasonable they may be.

The troll two-step is also shaping up to be the preferred method for starting a campaign, as demonstrated by Josh Mandel, a former Ohio state representative who is hoping to be the Republican's nominee to replace Sen. Rob Portman, R-Ohio, who is retiring in 2022. Mandel went on Twitter last week and unleashed a bunch of racist vitriol about "the various types of illegals flooding across the border," citing "Muslim Terrorists" and "Mexican Gangbangers," When Twitter reacted predictably, by removing this blatant violation of their rules against hate speech, Mandel shifted seamlessly to playing the victim.

"Conservatives everywhere should be frightened by the ongoing censorship by Twitter, Facebook, Google and the liberal media," he decried in a statement. Et voilà! Instant sympathy and victim status, without even having to raise a finger defending the original statement, which was equal parts racism and blatant lies.

The two-step works so well that the notorious Rep. Marjorie Taylor Greene of Georgia — who has been making a fortune in donations with false claims of being "censored" — was able to skip the first step of provocation-and-response and move straight to the second step of playing the victim recently. When Twitter accidentally suspended her account for 12 hours last week before reinstating it with an apology for the error, Taylor Greene immediately moved to playing the victim, tweeting, "I was just told @Twitter suspended me for 12 hrs in "error," on the same day Dems introduced a resolution to expel me from Congress. What a coincidence?" Even though she really should have been banned long ago for violating terms of service, the result of the fake cancellation: $210,000 in 24 hours of re-election fundraising for Greene.

This is why the troll two-step crystallizes how much "triggering the liberals" has become the central — and often only — tenet of modern conservatism.

Republicans know they can't defend their policies or ideas, and they certainly can't defend the various bigotries that animate their base voters. But what they can do is turn liberal-triggering into a sport, where it doesn't really matter what is triggering the liberals, so much as the fact that the liberals are triggered. Nor does it matter that no one is actually being censored and that criticism is not censorship. All that matters to the right is playing the victim and whining to the cameras about "cancel culture," a fake controversy that allows Republicans to avoid talking about policies and ideas, areas where they inevitably lose the debate.

It's tempting to imagine there's some way liberals could game this situation to defeat the troll two-step. After all, does liberal-triggering count if no liberals are triggered? Is this a situation where ignoring trolls makes them go away? Sure, sometimes that can work. Not all bait needs to be eaten after all! But ultimately, it's also not good to let racist comments and outright attacks on public health go without any meaningful pushback, either.

The better solution when dealing with trolls is to go meta.

Instead of merely criticizing the racist comment or boorish provocation, which invites the "cancel culture" whining, liberals can call out the game. Johnson isn't just a racist, but a racist troll who is throwing out red meat to distract from his seditious support for an insurrectionist president. Paul, Mandel, and Taylor Greene are all openly trolling for money and attention. Calling out the game is the best way to avoid playing it. It allows liberals to avoid giving conservatives that "triggered" reaction they so desire and allows liberals to rise above. It also helps sidestep false accusations of censorship, by avoiding the back-and-forth over whether or not someone is "really" being silenced to focus on why they would lie about such a thing.

Don't feed the trolls. Expose them. It's the only way to get out of the vicious cycle of right-wing provocation and victim-tripping.