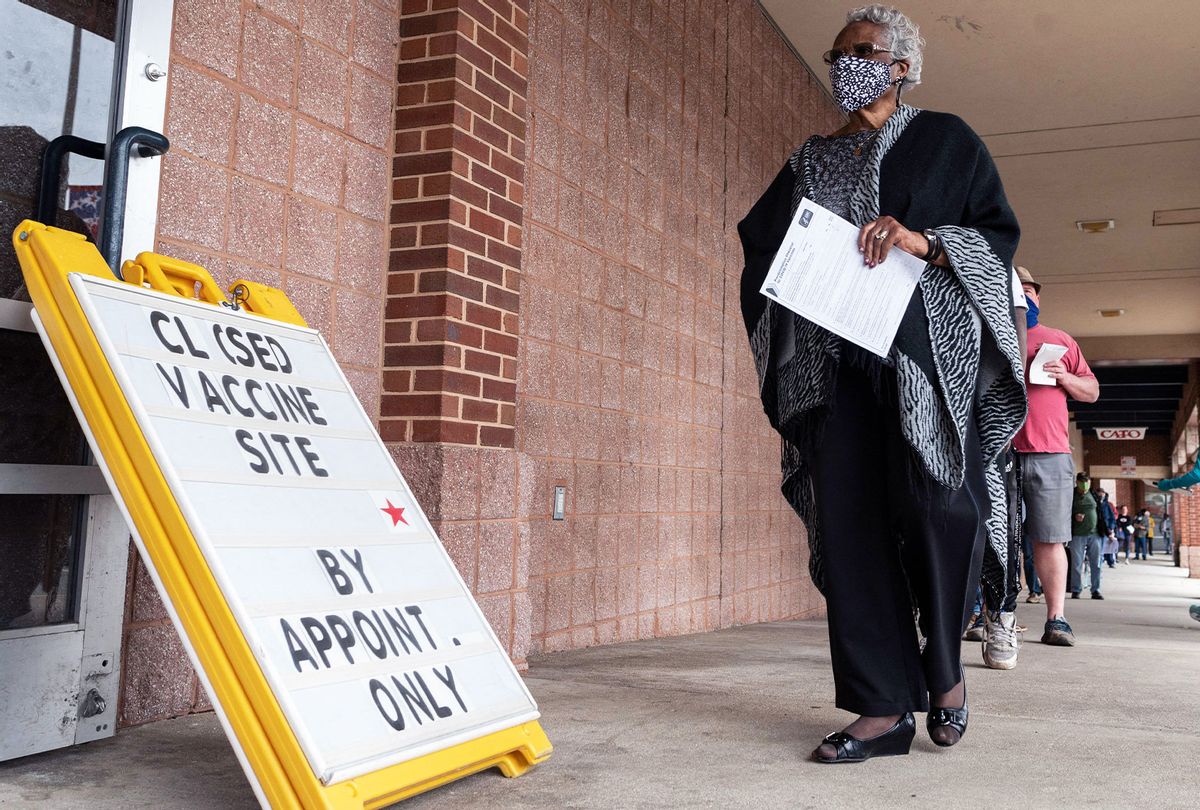 People line up before a Covid-19 vaccination drive the Lynchburg fire Department is helping organize at an old TJ Maxx store in Lynchburg, Virginia on March 13, 2021. - The Lynchburg Fire department teamed up with the city government and private industry to help administer and distribute vaccines to the counties around. They also use outreach with community groups to attract county residents from the surrounding areas to the mass vaccination sites. The biggest challenge the department sees moving forward is getting the vaccine to people in the rural areas. Health workers in the United States have administered more than 100 million Covid-19 vaccine doses, an official tracker showed Friday, March 12, around 30 percent of the world's total of shots in arms so far. (ANDREW CABALLERO-REYNOLDS/AFP via Getty Images)
--

Jen McGrew lives in Salt Lake City, Utah, but she didn't get vaccinated there. Instead, she traveled to Ogden, Utah — about 33.5 miles north of her home — for her first shot of the two-dose Pfizer vaccine.

McGrew, who was already traveling to Ogden daily to visit her mother in the hospital, didn't have a formal appointment — she just got lucky.

"I stepped off the elevator on the ground floor one afternoon and saw the wrap up of that day's clinic," she told Salon via email. "I stopped to ask if there were any leftovers or 'walk-in' shots remaining, and within five minutes I was in front of an attendant who got my paperwork started."

Her second shot is scheduled there for the end of this month.

Ogden, a ski town, is the county seat for Weber County, which with a population of 231,000 is less than one-fourth the size of Salt Lake City's eponymous home county. But the town of Ogden is much more conservative than Salt Lake City, which, in spite of Utah's reputation, leans very much to the left.

McGrew's story highlights a peculiar trend playing out nationwide: one in which urban city-dwellers, struggling to find vaccines in their home cities, have found success getting vaccinated in neighboring counties that are more conservative and, in some cases, more rural.

Since vaccines are distributed to counties based on population, that suggests that more right-leaning regions should have more of a surplus of vaccines than more liberal regions. And indeed, that seems to be borne out by which states are opening up vaccinations to all adult residents.

On Tuesday, Texas announced that all residents over the age of 16 will be eligible for coronavirus vaccinations next week. Currently, all adults over the age of 16 are eligible to get a vaccine in red states like Alaska and Mississippi. Utah will expand eligibility this week, and Tennessee announced last week that all residents 16 and older will be eligible for vaccinations starting on April 5.

On a more granular level, red counties within both blue and red states across the country appear to have a greater supply of vaccine, suggesting that vaccines are going unused and untaken in those areas. For example, a rural Missouri town on the border of Iowa was left with 1,500 unused doses after a mass vaccination drive.

In February, The Colorado Sun reported that rural counties were vaccinating people faster than urban ones; one southwest Colorado county had already run out of people to vaccinate. While this isn't true of all rural areas — some have reportedly had messy vaccine roll-outs due to a lack of resources — it does appear to be a trend in some regions.

Experts, like those weighing in on the trend in Colorado, have chalked this up to population differences. Yet vaccine hesitancy may also play a role. As has been reported time and again, rural Americans appear to be less interested in the COVID-19 vaccine — even though many rural states have been hard-hit by the pandemic. In North Dakota, about 1 in 500 residents died from the coronavirus. Yet now, public health officials say the state's biggest hurdle to get its population vaccinated is vaccine hesitancy.

"I think it's just going to take a bit of time for some people to make that decision to get vaccinated, but we just have a lot of work correcting misinformation that's out there,"  Immunization Program Director Molly Howell said at a press conference earlier this month.

Dr. Amesh Adalja, a senior scholar at the Johns Hopkins Center who is based in Pennsylvania, said he's seeing this trend play out in his home state, too. Adalja says that he has observed rural counties vaccinating people from surrounding counties with more densely-populated cities. As a doctor, he has even advised his patients to seek out vaccines in rural places in some cases.

"Some counties will even say we're vaccinating people from all counties, not just our home county, because there may have been differences in allocations or maybe differences in vaccine uptake, differences in expiry dates," Adalja said. "So they're all sort of moving at their own pace. I encourage people to be tenacious about this."

Adalja said he's heard of people going out of state to get vaccinated. While he said he believes the trend moves both ways — people going from rural to urban, then urban to rural — when asked why some rural counties appear to have a surplus of vaccines, he said it's "multifactorial."

"I don't know that vaccine hesitancy is playing a major role in every place . . .  it might be in certain places, but it's probably idiosyncratic to the county," Adalja mused. "It might have to do with how much a state allocates to a given county and how they make that formula— for example, we know that some states allocated to nursing homes based on the number of beds they had rather than the number of occupied beds, so that could have created a surplus in certain counties, versus others."

In the United States, nearly 2.5 million doses are being administered a day. According to the Centers for Disease Control and Prevention (CDC), as of March 23, 2021, 128,217,029 doses have been administered and 164,300,795 doses have been distributed across the country. While various states and counties have differing eligibility requirements, Adalja said he doesn't think it's a "bad" thing when it comes to crossing state and county lines to get inoculated.

"It's not a bad thing, because in the end we want vaccines in people's arms, and it's less important what side of the county line they live on, rather than just making sure they're actually getting vaccinated," Adalja.

Instead, the need for people to travel great distances speaks to the rockiness of the roll-out thus far.

"Unfortunately, our vaccine rollout wasn't wasn't perfect, and still is not perfect, but it's getting better," Adalja said. "And that's just a reflection that people can't go to in their own municipality and get vaccinated."