With red carpets relegated to Zoom, we can only hope to recapture the spirit of such camp plumage post-pandemic 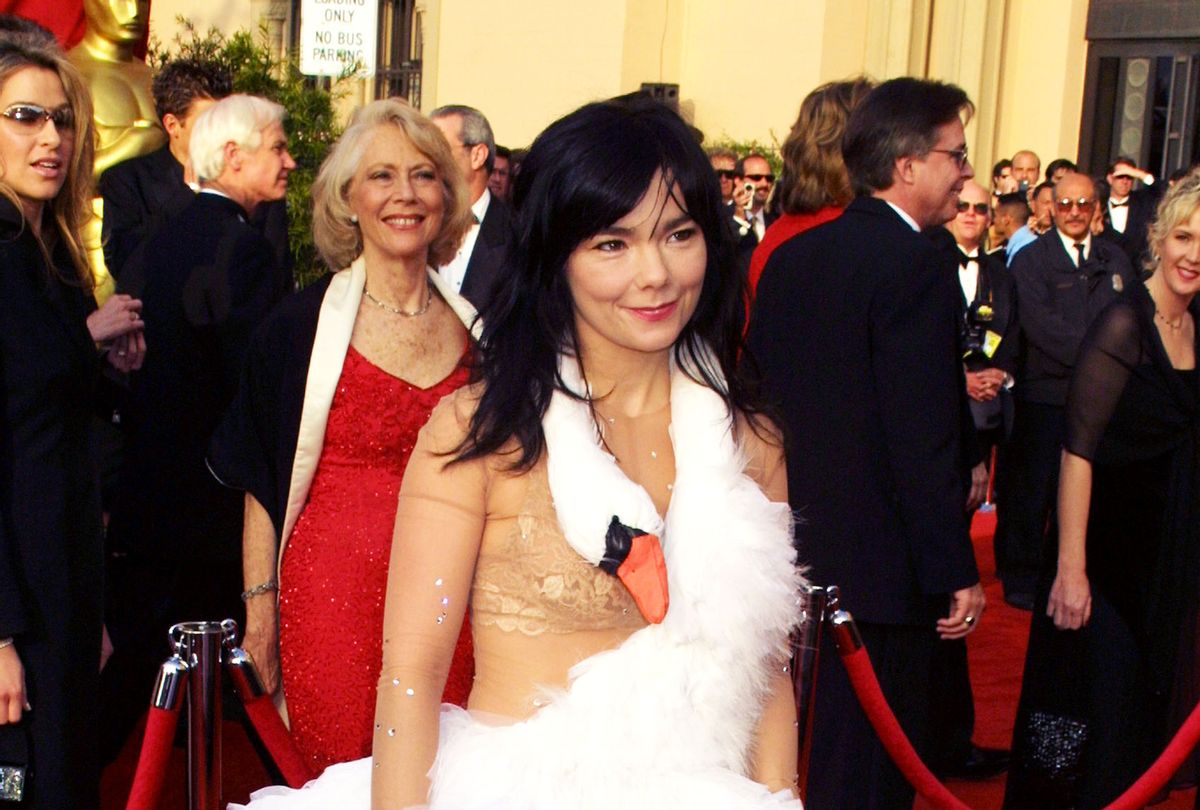 jork in her iconic swan dress on the Oscars red carpet on March 25, 2001 (Jeffrey Mayer/WireImage)
--

Twenty years ago on March 25, avian history was made while simultaneously changing the significance of the red carpet look forever.

In less dramatic terms, it's the day that Icelandic musician Björk debuted her swan dress at the Oscars. The swan dress – designed to mimic the large bird with its white body gracefully draped across the neck and torso of the wearer – is a cultural touchstone for lovers of modern celebrity culture. Although other major stars dabbled in the sartorial absurd – like Dennis Rodman with his colorful experimental outfits, Justin and Britney's infamous denim ensemble, or Rose McGowan's see-through 1998 VMA's dress – Björk's set the tone for the following decades of Lady Gaga and Nicki Minaj-filled-camp couture as its own form of promotion and spectacle.

The garment in question was designed by Marjan Pejoski, and came from Björk's inspiration to send a message in the briefest and most effective way possible.

"I was very aware when I went to the Academy Awards that it would probably be my first and last time. So I thought my input should really be about fertility, and I thought I'd bring some eggs."

When she mentions eggs, that is not just a metaphor. At the awards ceremony, Björk literally had an egg underneath her gown, squatted to the ground and then proceeded to "lay it" in front of the masses.

Predictably, this dress caused quite the stir. Fashion commentators like the late Joan Rivers noted, "the girl should be put into an asylum," while others said that she was simply there to provide the "kook factor," whatever that actually means.

The gown also became an indelible part of the cultural zeitgeist. Both Ellen Degeneres and Kevin James wore their own versions of the dress in parody. It has arguably been one of the most widely debated fashion moments in recent history, even being featured at an exhibition exploring the camp aesthetic  curated by the Metropolitan Museum of Art in 2019. Björk's decision to wear this gown to one of the most prestigious awards ceremonies out there indicates that there was more to this look than being just, well, a look. What Björk gave us was a moment.

And so, as we find ourselves fondly reminiscing two decades later while our society is largely still on pause, one can't help but wonder: Can we return to a time where there's another swan dress moment?

Despite the pandemic eliminating in-person red carpets, we are still getting red carpet looks . . . just from home. Zendaya wore a stunning custom Giorgio Armani Prive gown with a simple updo for her acceptance of best actress at this year's Emmy awards. Regina King and Anya-Taylor Joy were just some of the many stars that drew praise for their respective ensembles at the Golden Globes.

But even then, part of the excitement around King's gown centered on her senior dog, 15-year-old Cornbread, who appeared in the background as she modeled her sequined Louis Vuitton dress. There's a level of humanity to these remote ceremonies that's heartwarming, and yet removes some of the performance aspect of wearing such elaborate attire.

This humanity can also be taken to extremes. An exhausted-looking Jason Sudeikis was a topic of discussion that same night for wearing a now sold-out tie-dye hoodie for his unexpected acceptance speech for best actor in Apple TV's comedy series "Ted Lasso."

Some other highlights of these more laid-back looks include Jodie Foster's pajama set to accept her award for best supporting actress, as well as Chloe Zhao's green long-sleeve shirt and braids for best director of a motion picture.

While these people have every right to simply be comfortable at home, this gravitation towards a casual awards ceremony could mean trouble for the future of the very shows themselves. Without the promise of celebrities looking their best in designer duds, fans of all kinds or even just fashion enthusiasts may not tune in.

Adweek reports that viewership for the Golden Globes has taken a sharp decrease with about 6.9 million viewers in 2021, a 62% drop from the previous year, and the lowest turnout the ceremony has faced in about 26 years.

The trend is not isolated to just the Globes: The Emmys, The Grammys, and the American Music Awards also saw significant decline in their numbers. This could be attributed to a number of factors, like a global pandemic still raging that would likely distract some from the navel-gazey nature of watching rich people talk about each other for an entire evening.

But it could partially be due to the fact that the excitement involved with keeping up with your favorite celebrities' outfits is for the most part, gone. Even if they do decide to dress up, it's much less satisfying to try and parse the entire thing via a grainy Zoom display.

It's difficult to say whether or not these kinds of moments will have a place in future award ceremonies or red carpets. Perhaps people have lost interest in the usually long, drawn-out shows and their stale writing that caters to an impossibly small niche of the human population.

But if there is a renewed interest in the costuming spectacle that we witnessed in meat dresses past, then maybe we'll get a comeback post-COVID. And leading the flock will always be a small Icelandic woman in a white feathered get-up.