MSNBC host brought the receipts to a years-old controversy, throwing down with right-wing Texas senator 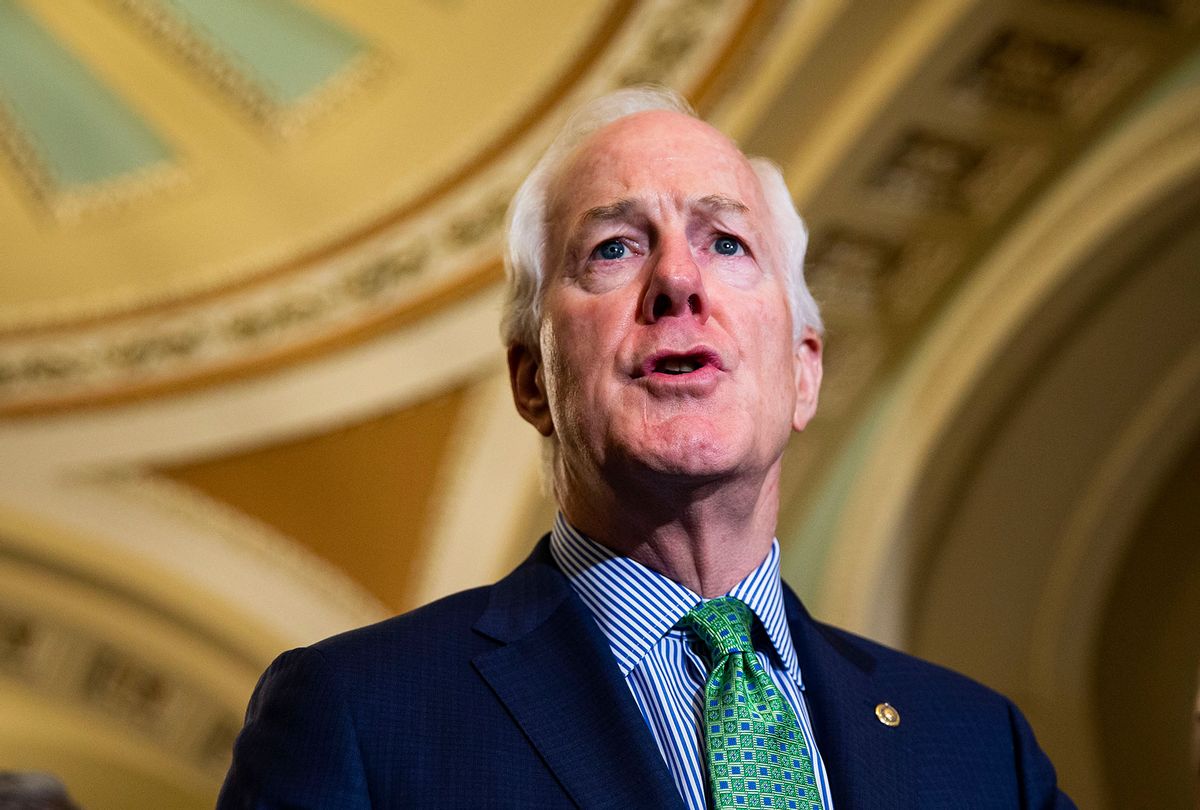 MSNBC host Rachel Maddow tore into Sen. John Cornyn, R-Texas, over his efforts to derail one of President Biden's key Justice Department nominees, rolling back the tape and calling out the GOP senator over turning a blind eye to a racist mass arrest scheme targeting innocent Black people in Tulia, Texas.

Maddow dug into the record book and appeared to come up with a reason why Cornyn might be trying to block Vanita Gupta's appointment as associate attorney general, the third-highest DOJ position. The apparent tensions between the two date back to 1999 when an undercover officer named Tom Coleman was busted for sending "dozens of black people to prison on bogus drug charges in Tulia," according to The Associated Press.

As Maddow pointed out on Wednesday night, it was Cornyn who gave Coleman a "Lawman of the Year" award in Texas, while Gupta spearheaded a legal effort to overturn the dubious convictions and free wrongfully imprisoned people. Here's how Maddow put it:

A senator from Texas who used to be attorney general ... Texas Sen. John Cornyn ... is the guy who gave officer Tom Coleman the Texas "Lawman of the Year" award for his great work in Tulia, Texas. Before Vanita Gupta came in and exposed who that guy actually was. Before he was convicted of perjury. Before every single one of those cases was overturned because that guy made them all up.

All those wrongfully arrested got full pardons from then-Texas Gov. Rick Perry, Maddow observed, "because of the Kafkaesque nightmare that was that guy, who John Cornyn named 'Lawman of the Year.' I just wonder if Sen. John Cornyn might be at all embarrassed about this and about the young lawyer who came to Texas and exposed this thing, this terrible and cartoonishly evil thing that he had helped along, that he had celebrated, that he had given an award to."

"Vanita Gupta is going to be confirmed by the Senate ultimately," Maddow continued. "She will be the No. 3 official at the U.S. Justice Department under [Attorney General] Merrick Garland, despite Republican opposition to her led by the senator who she humiliated for his enabling, encouraging, celebrating role in one of the worst, most racially explosive, astonishingly brazen law enforcement put-up jobs in the last generation. Sen. Cornyn, I do not know if he's ashamed by his role in all that. I wonder if he ever tried to get the award back? But his effort to get revenge on the woman who had to come in and fix his mess, that effort will fail."

"She will win, and he will lose. Again. God bless Texas," the MSNBC host concluded.

As NPR reporter Carrie Johnson noted on Wednesday morning, Cornyn has made it clear that he wants to speak ahead of Gupta's confirmation vote.

Republican Senator John Cornyn said he wanted to speak before any vote on Associate Attorney General nominee Vanita Gupta. GOP lawmakers have criticized her record, but Democratic Sen. Dick Durbin says the objections may really be about voting rights.

In the Senate Judiciary Committee on Wednesday, "after nearly two hours of debate, the committee voted along party lines, 11-11," on Gupta's nomination," The New York Times reported, leaving the nominee in limbo for the moment. "Several Republicans gave lengthy comments opposing Ms. Gupta, including Senator John Cornyn, Republican of Texas, who called Ms. Gupta a liar for saying that she has never advocated for the decriminalization of all drugs. He pointed to a 2012 editorial in which she said that simple possession of drugs should be decriminalized,"

Now it will be left up to Senate Majority Leader Chuck Schumer to bring the nomination to the floor and marshal the votes of every single Senate Democrat — and either at least one Republican, or Vice President Kamala Harris as tiebreaker — to confirm Gupta.

You can watch the full clip above via MSNBC.