What is an NFT, and why does John Cleese want to sell you his for $69.3 million?

Big name artists like Kings of Leon, Boy George and Grimes are all betting on the future of non-fungible tokens 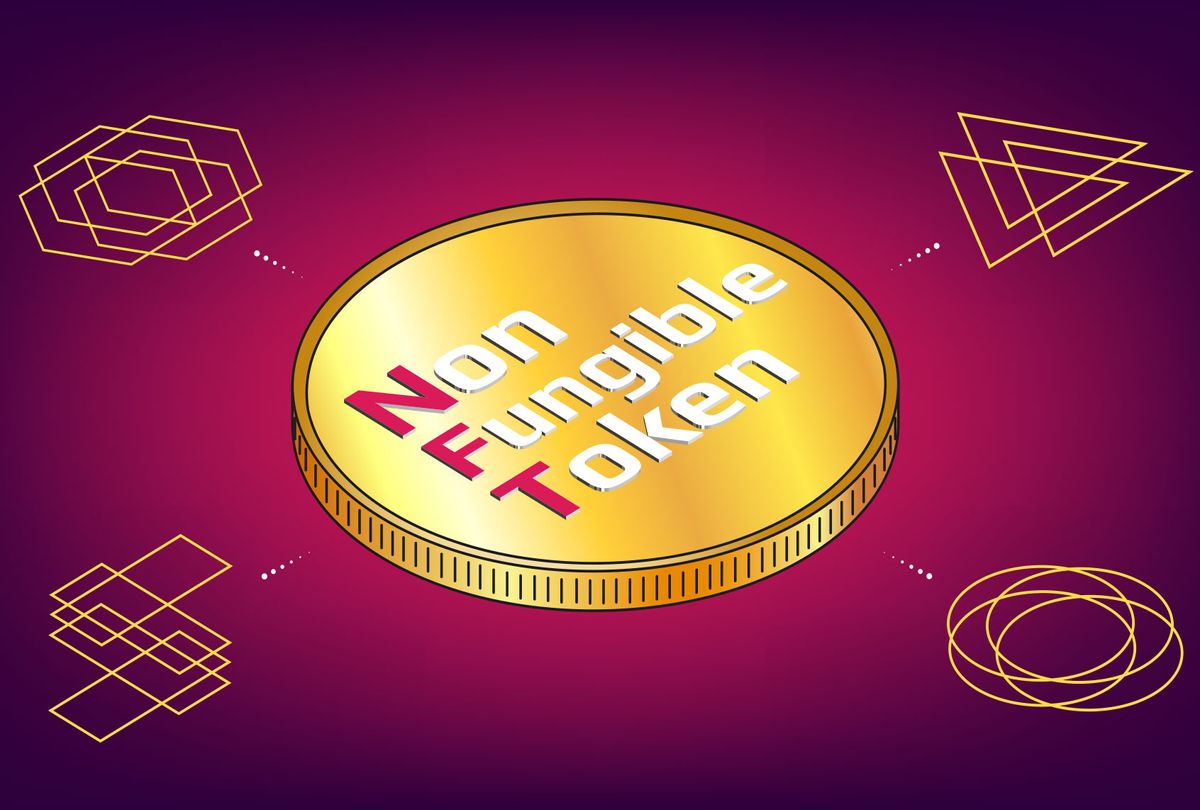 "Monty Python" actor John Cleese wants to sell you the Brooklyn Bridge. Well, a very rudimentary sketch of the landmark that he made on his iPad Pro. And for the low, low price of $69.3 million, you can own this unique digital piece of art, the latest celebrity offering of an artform known as the NFT, aka non-fungible token.

While you could, ostensibly, just screenshot Cleese's image that he shared on Twitter, it would essentially be a knock-off or a fraud, and wouldn't have much (if any) value. That's because an NFT is like a virtual trading card that comes "tagged" with digital proof of authorship and ownership.

Cleese's foray into digital art and currency is being done with a wink; it's a kind of commentary on the current NFT frenzy that has infiltrated the worlds of traditional art and music. For instance, an NFT of a piece by the digital artist Mike Winkelmann, who goes by Beeple, sold for $69 million at Christie's earlier this month. Cleese's asking price is a play on that number.

In an interview with Vanity Fair, Cleese said that the selling price of Beeple's work is proof that "the world has gone terminally insane."

"Technology is changing and moving so quickly that we can't even see we're standing in quicksand as we stare at a bunch of pixelated JPEGs, wondering what they might sell for next," he said.

However, the sale of Cleese's image will run through April Fools' Day and the current bidding is up to nearly $36,000, so people obviously don't think it's a total joke. So, what exactly are NFTs? And what impact is their use going to have on music and culture? Here's a beginner-friendly guide to what you need to know:

What exactly is an NFT?

An NFT — or non-fungible token — is part of the Ethereum blockchain. Ethereum is a cryptocurrency, like bitcoin or dogecoin.

"Non-fungible" essentially means that the tokens are unique, in that they can't simply be replaced with something else. For example, if I have a dollar bill and trade it for another dollar bill, I'm in basically the same position I started. If, however, I have an ace of hearts playing card and exchange it for a Yu-Gi-Oh! trading card, I have something that is similar in form, but fundamentally different.

There are non-fungible assets that we already interact with on a day-to-day basis.

"Domain names, event tickets, in-game items, even handles on social networks like Twitter or Facebook, are all non-fungible digital assets,"  Devin Finzer, CEO of the NFT marketplace Open Sea, wrote in an explainer. "They just vary in their tradeability, liquidity, and interoperability."

This concept has simply reached the mainstream art market. While NFTs can still be traded in the same way as bitcoin — they're stored on a decentralized database without much government oversight — they represent the ownership of artwork, songs, videos or poems, instead of cash-like balances in a digital wallet. It's like you have proof of provenance for your own digital art and collectibles gallery, which can include GIFs, digital renderings, video clips and video game skins.

"[NFTs] are unique files that live on a blockchain and are able to verify ownership of a work of digital art," Jacob Kastrenakes wrote for The Verge. "Buyers typically get limited rights to display the digital artwork they represent, but in many ways, they're just buying bragging rights and an asset they may be able to resell later."

Like analogue artwork, there is typically only a select amount of these digital pieces, which drives a competitive market.

Relatively so. As Andrew Steinwold, a crypto investor and analyst who founded the NFT investment firm Sfermion, wrote in a post about the history of the digital tokens, forms of NFTs have been around since 2012; but it wasn't until 2017 that NFTs really hit the mainstream with the introduction of CryptoKitties

"CryptoKitties is a blockchain-based virtual game that allows players to adopt, raise, and trade virtual cats," Steinwold wrote. "Cats, on a blockchain!"

The game's developers describe them as "breedable Beanie Babies," each with its own unique 256-bit genome. Like real-world pet breeding, the CryptoKitties are "tagged" with documentation about their origin. In 2017, the average price for a CryptoKitty was about $27, but CNN reported in December of that year that the most expensive CryptoKitty had sold for the equivalent of $110,707.

"It might seem a strange way to spend a small fortune, but no more so, it could be argued, than splashing out on real-world collectibles," CNN's Matt Linares wrote. "A Pokémon card, for example, sold for almost $55,000 in 2016."

If NFTs aren't new, why am I hearing so much about them now?

While NFTs steadily gained popularity in some artist circles, more mainstream artists and corporations tossed their digital hats into the ring during the pandemic when traditional income streams, like concerts and live shows, weren't possible. As Rolling Stone reported earlier this month, Kings of Leon released their new album "When You See Yourself" as an NFT— becoming the first band to do so.

Three types of tokens were released: one was a special album package, the second included live show perks, and the third included exclusive audiovisual art. The album was released everywhere albums are currently released, as well — Spotify, iTunes, Apple Music — but the NFT, which was originally priced around $50, will be the only product with enhanced media.

The sale of the album NFT lasted for two weeks, and no more are currently being made, hence the token is now a tradable collectible.

This is just one example of how NFTs could revitalize the music business. Josh Katz is the CEO of YellowHeart, "a company that wants to use blockchain technology to bring value back to music and better direct-to-fan relationships." He helped organize the "When You See Yourself" NFT sale.

"Over the last 20 years — two lost decades — we've seen the devaluation of music," he told Rolling Stone. "Music has become great at selling everything except music. There's been a race to the bottom where, for as little money as possible, you have access to all of it. Previously, it cost $20 to go get one song.

Other musical artists have jumped on the NFT bandwagon, as well, including Grimes, Portugal the Man, Post Malone, Snoop Dog, Lionel Richie and, as of Wednesday, Boy George, who is planning to release exclusive NFT content.

"I think life turned me into art," George said in a press release about the decision. "My role models were both artistic types and hard-working types. I've painted myself and others. I have painted myself into a corner. I love metaphors and mystery and crypto sound like klepto so that makes me a crypto maniac."

Alright, so music I get — but why are people investing in digital clips of NBA stars dunking a basketball?

Right, so you're talking about entrepreneur Mark Cuban's recent purchase of a clip of Dallas Mavericks player Maxi Klieber from NBA Top Shot, an online-only marketplace where users can buy, sell and trade NBA highlights. Those highlights are being traded and sold as NFTs.

Cuban, who also literally owns the Mavericks, wrote about the decision on his blog, where he likened it to old-school trading cards.

"I get to enjoy knowing I own my Maxi Klieber dunk Moment, along with knowing the serial number and much more," he said. "Some people might complain that I can get the same video on the internet anywhere any time and watch it. Well guess what, I can get the same picture on any traditional, physical card on the internet and print it out, and that doesn't change the value of the card."

He continued: "The value is still set by the same laws of supply and demand."

And currently, the demand is high. As CNBC reported, Top Shot has generated over $230 million in gross sales, according to its creator Dapper Labs, whom, it should be noted, is the firm that also developed CrytoKitties. In February, a LeBron James highlight sold for $200,000. A Zion Williamson edition went for a little less than that.

The jury is still out on this one, honestly. In many ways, the current digital art market is reminiscent of 2020's OnlyFans boom. There were a ton of independent content creators and sex workers who used the platform before celebrities with pre-established fan bases started to join.

There was a lot of outcry, for instance, when actress and singer Bella Thorne became the first creator on OnlyFans to make $1 million in a single day. Many of the site's users complained that Thorne was just "a celebrity gentrifying a platform and making obscene amounts of money," as Rolling Stone reported, without recognizing or acknowledging actual sex workers who rely on it for income.

"For a technology that promises to 'disrupt' the world of digital art, it is tremendously efficient at replicating the most inaccessible paradigms of its physical predecessors," Arielle Gordon wrote for Stereogum.

There are already hierarchies in the physical world when it comes to music, art and fame — and celebrities benefit from those in the digital world, as well. Grimes, for instance, sold over $6 million worth of digital art via NFTs in a week, temporarily crashing the NFT platform NiftyGateway.

This causes investors, Gordon wrote, to seek out some undiscovered talent and treat them like stock that's meant "to be consumed at their lowest possible value to be cashed in after they've achieved mass popularity."

Is this particularly innovative? That's how things work in the analogue art market. It just means that, despite blockchain's "decentralized, supposedly more democratic nature" it's currently operating under many business practices that are exhaustingly familiar: supply and demand, speculation, investment trends and the power of celebrity.

Questions remain, however, about how many average art and music enthusiasts will start putting their real-world dollars into NFTs, how long the current craze will last and whether it's as accessible for burgeoning digital artists as it purports to be.