Moore's dark joke about the Boulder shootings might not have been graceful, but it expressed something profound 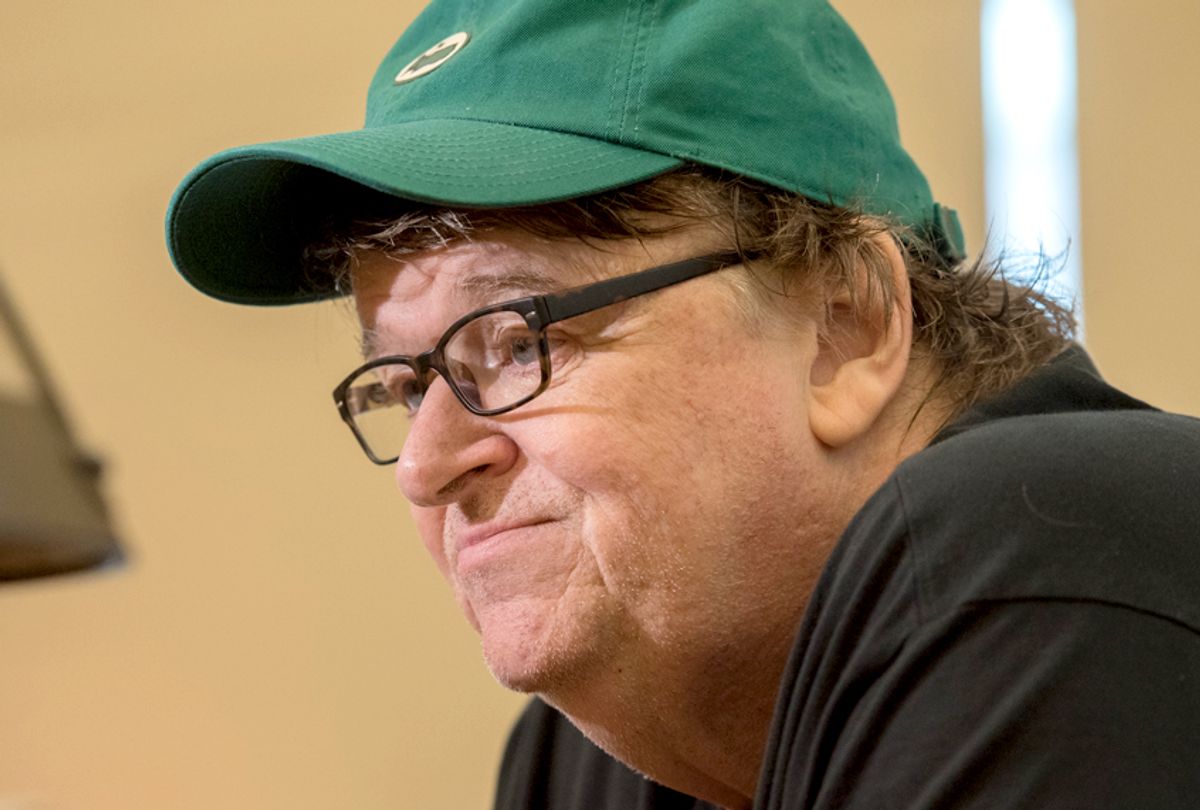 The right-wing "cancel culture" mob has once again grabbed their torches and pitchforks. Their newest target is documentary filmmaker and political commentator Michael Moore.

What is Moore's most recent offense?

In response to Monday's mass shooting in Boulder, Colorado, Moore tweeted "The life of Ahmad Al Aliwi Alissa shows that people can come from all over the world and truly assimilate into our beloved American culture," and included an image of the Statue of Liberty.

Alissa is the alleged shooter in the Boulder tragedy. He was born in Syria but came to the United States as a child in 2002.

Reasonable persons may choose to disagree with Moore's timing, or his tone. But the fact remains that his comments about the Boulder mass shooting are largely correct.

Those on the right and elsewhere who are performatively "outraged" at Moore's comment are just angry because he spoke the truth about America's gun culture and our societal addiction to mass shootings and gun violence.

A society's culture is not a buffet where a person chooses the things they like and then ignores or denies the existence of those they do not. Such thinking is immature, simplistic and lacks nuance. In other words, it confirms what research by social psychologists, neuroscientists and others has shown about how conservatives and right-wing authoritarians think about morality, politics and society more generally.

As demonstrated by historian Richard Slotkin in his landmark book "Gunfighter Nation", guns and gun violence are central to America's culture and identity.

During an interview with Bill Moyers about the 2012 mass shooting at Sandy Hook Elementary School in Connecticut, Slotkin elaborated:

And what we have in this country is we have a history in which certain kinds of violence are associated for us with the growth of the republic, with the definition of what it is to be an American. And because we are also devoted to the notion of democratic individualism, we take that glorification of social violence, historical violence, political violence, and we grant the individual a kind of parallel right to exercise it, not only to protect life and property but to protect one's honor and to protect one's social or racial status. In the past that has been a legitimate grounds.

To that end, mass shootings and other examples of gun violence are one of the principal ways that America is truly an "exceptional" nation.

As I explained in an earlier essay at Salon:

The U.S. has the highest rate of gun-related deaths among wealthy nations. The number of deaths from gun violence would be even higher if not for dramatic recent advances in trauma and emergency medicine.

The U.S. has more guns per capita than any other country in the world — even more than Yemen, a nation torn apart for years by a bloody civil war. In fact, there are more guns in the United States than there are people. Gun violence is estimated to cost the U.S. economy more than $200 billion a year, according to a 2019 report.

It is especially worth noting that just 3 percent of gun owners possess half the total number of guns in America. Some of these "super-owners" have dozens of guns. They are overwhelmingly white and male. …

While gun "advocates" have created superhero narratives, such as the fantasy about "a good guy with a gun" who stops "a bad guy with a gun," the reality is that a gun owner is much more likely to shoot a family member, a neighbor, a friend or themselves — by accident or suicide — than a criminal assailant. "Defensive gun use" statistics are inaccurate and wildly exaggerated.

Many members of the right-wing chattering class and others of that tribe are responding to Michael Moore's basic observations about guns and American culture as though they had suffered a narcissistic injury. This is true more generally in how the American right responds to nearly all attempts to enact reasonable gun safety laws.

But what is the source of this injury? For many gun owners, especially right-wing white men, the gun is a key part of their core identities in terms of privilege, sense of self and power. It is not just the gun that they fear will be regulated — they believe their literal personal existence will be imperiled if access to guns were to somehow be even marginally curtailed. Such deep attachment to guns as an extension of the self is largely explained by what social psychologists have termed "terror management theory."

This posits that because human beings are aware of their own mortality, they therefore develop compensatory behaviors which include cultural institutions like religion and patriotism. Symbols such as flags, and in the case of Christianity the crucifix, have a totem-like power which gives the believer and follower a sense of immortality. These systems of meaning and dynamics are at work on both a conscious and subconscious level, for individuals and society as a whole.

In American culture, guns have effectively become sacred objects. In that role, the gun is a means of symbolic and literal protection from death. It is also a tool for getting and keeping one group's power over others as seen with the genocide of Native Americans, the enslavement of black people, militarized policing, and the creation and maintenance of American empire.

Moore's tweet about guns and American culture were even more triggering for conservatives and other members of the right because he included an image of the Statue of Liberty, a sacred object in the national imagination.

It is no coincidence that death anxieties are a key factor that correlate with high levels of support for Trumpism and other authoritarian movements.

Death anxiety has a profound influence on American politics in other ways as well: In red-state regions where coronavirus rates (and death rates) are highest, support for Donald Trump during the 2020 Election was also at its highest. In essence, death and sickness have made Trump's followers increasingly loyal to him and the Republican Party.

Ultimately, America's inability to create and enforce effective gun laws is rooted in competing conceptions of freedom. Conservatives emphasize "negative freedom" and a belief that government should be shrunk down to the bare minimum, and that "freedom from" is the most important aspect of democracy and human existence.

Liberals, progressives and other more humane thinkers understand that government can play a positive role in society. In this conception, "positive freedom" means that citizens can live better and more productive lives where, for example, they are free from anxieties about being killed in a mass shooting, or free from the fear that they may fall ill and not have access to health care, or free from the fear that their environment is dangerously polluted.

To state this equation differently, a gun owner's freedom ends at the boundaries and limits of public safety. Likewise, the "personal freedom" not to wear a mask during the coronavirus pandemic ends at the health and safety of other people.

A healthy democracy always involves a balance between these positive and negative understandings of freedom.

What Michael Moore hinted at in his tweet about gun violence is the reality that we need to embrace a new form of American patriotism, one grounded in the facts and realities of American history, life and culture.

If the American people keep on lying to themselves about who they are, then the plague of mass shootings and gun violence will continue — and all the other existential problems in our society that feed into this epidemic of violence will keep getting worse as well.