"Donald Trump will be back in office in August!" 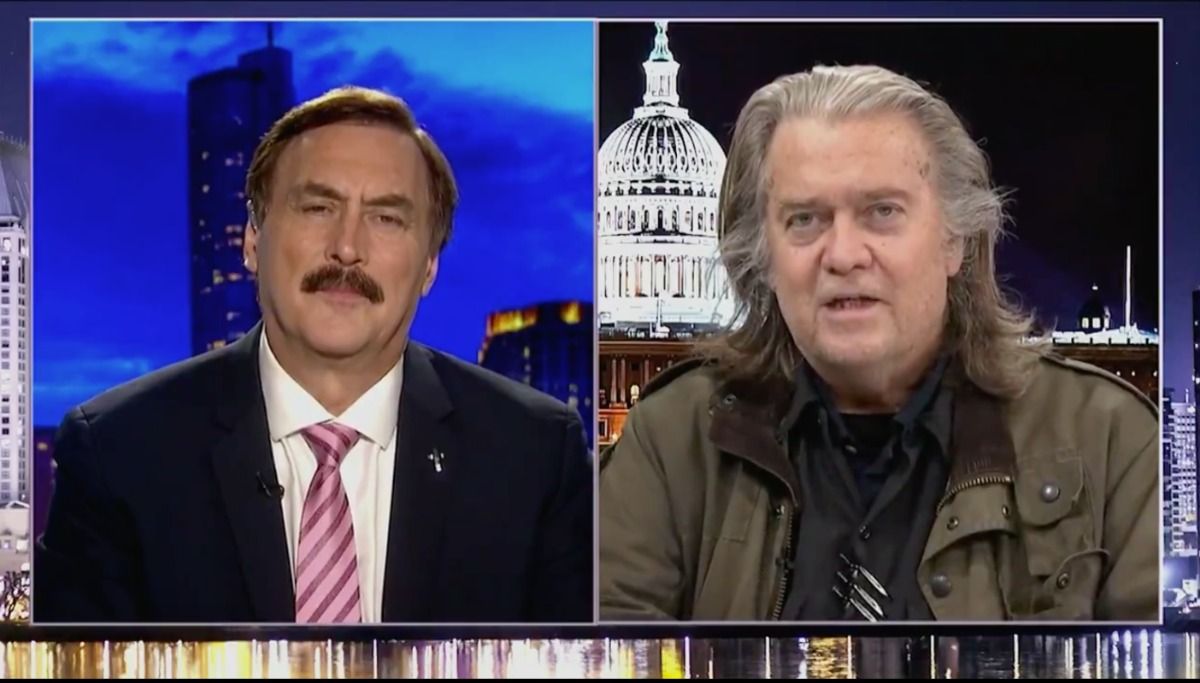 MyPillow CEO and fervent President Donald Trump supporter Mike Lindell declared on Friday that Trump will be re-installed as president come August during a podcast appearance on Steve Bannon's "WarRoom Pandemic" program. The far-fetched remark caught wind and was quickly mocked on Twitter midday on Monday.

"What I'm talking about, Steve [Bannon], is what I've been doing since Jan. 9th," the pillow maven said with authority. "All the evidence I have - everything is going to go before the Supreme Court, and the election of 2020 is going bye-bye. It was an attack by other countries, communism coming in," he continued. "I don't know what they're going to do with that after they pull it down."

"Hold on a sec, hold on," Bannon tried to interrupt before Lindell shouted out: "Donald Trump will be back in office in August!"

Mike Lindell declares that as a result of voter fraud lawsuit he'll soon be filing, "Donald Trump will be back in office in August." pic.twitter.com/5Ewtd9SZ1O

Reacting to the clip of Lindell stating Trump will return to the White House come August, Mother Jones' David Corn wrote: "This guy needs more rest." "If some constitutional law scholar is bored today, I would read 1000 words on what Lindell is talking about. (I think the short answer is: No, one Congress certifies the electoral count you can't un-do it.)," Washington Post reporter Dave Weigel further remarked.

During that same segment on Bannon's podcast, Lindell announced he would be releasing a new documentary (using the term "documentary" lightly here) entitled "Absolute Interference," which, according to the CEO, has the evidence and proof that his first film, "Absolute Proof," was notably lacking. Lindell didn't immediately return a request for comment from Salon on Monday afternoon about if his second film will truly have "absolute proof" of widespread election fraud. Salon executive editor Andrew O'Hehir reviewing the original two hour "Absolute Proof" film, gave a blistering critique, writing, "It resists all structural and narrative conventions, makes no effort to tell a clear story, contradicts itself and leaps from subject to subject, and could fairly be described as a meditation on what has gone awry in our society." The release of the second film, "Absolute Interference," is slated to occur in "a few weeks," alongside Lindell's new right-wing alternative social media platform "FRANK," which stands for "Free, Forthright, and Sincere Expression of Speech." Lindell has billed the new social media platform as being indestructible, claiming it was built with "reverse engineering," but as of now the information page is being powered by a rather standard WordPress backend.

"Absolute Interference," the upcoming and second Lindell "documentary" on "election fraud," according to the pillow chief, will feature "whistleblowers" in disguises due to the alleged threats they have been receiving. Asked by Bannon during the Friday podcast appearance if the "whistleblowers" were Dominion Voting Systems employees, Lindell awkwardly agreed and said he has been in touch with numerous former and current Dominion employees.

Last week, Lindell, one of Fox News' largest advertisers, railed against Fox News, declaring on a small right-wing YouTube channel that the cable news heavyweight might be "in on" the $1.3 billion Dominion lawsuit filed against him."Why can't people go on there [Fox News] and say their free speech, then?" Lindell asked aloud. "You're already sued, Fox. What do you have — are you going to get double sued? What's the matter with you? What are they in on it? I don't get it. Is it a fake lawsuit?" Lindell stated.

Lindell, a steadfast supporter of Trump, maintains that Trump won the 2020 election and has since turned his focus to Arizona, where he believes enough votes and fraud could turn up, to have Trump re-installed as president ultimately. Facing a $1.3 billion lawsuit and shelling out lots of cash to right-wing groups, the shot-clock is on for Lindell to turn up evidence of widespread election fraud, which he has yet to accomplish. Oh, and what happens if the second documentary catches on? Will the "end of time" come for the world?