Biden has made rapid progress on the pandemic and the economy. But the fight for democracy will be his legacy 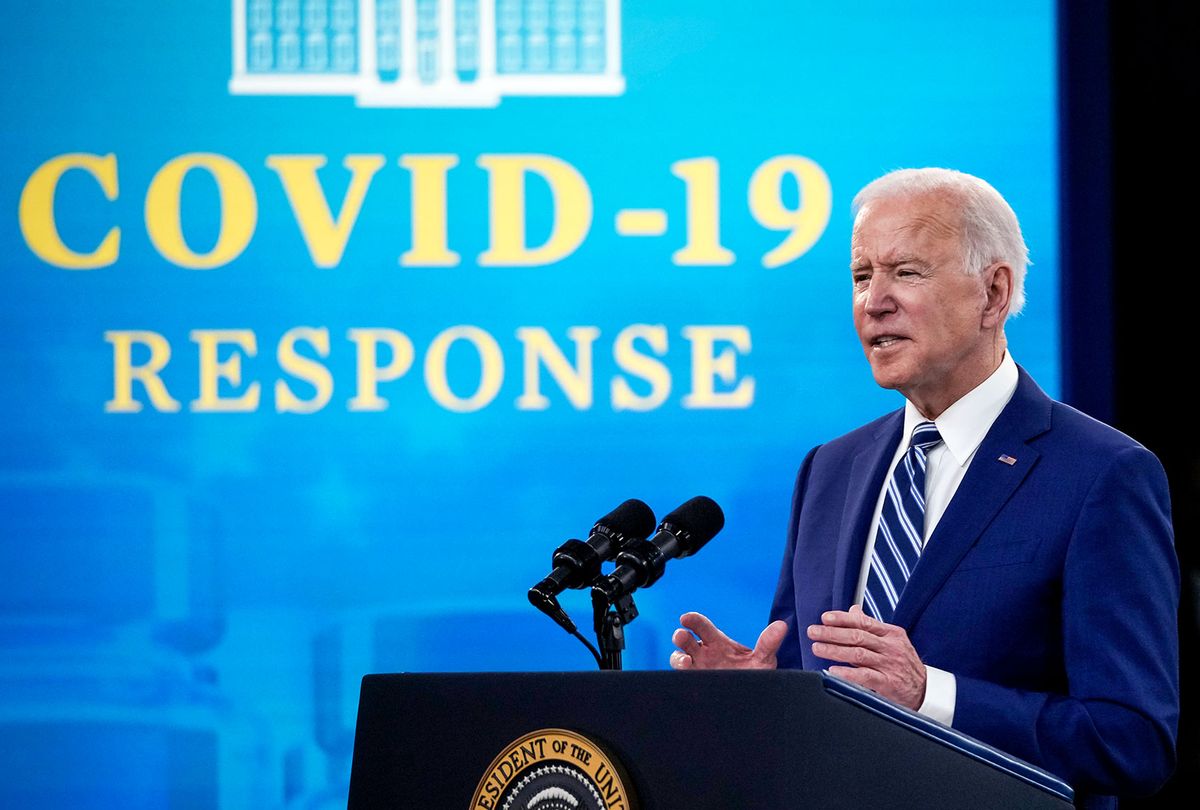 Vice President Kamala Harris looks on as U.S. President Joe Biden delivers remarks on the COVID-19 response and the state of vaccinations in the South Court Auditorium at the White House complex on March 29, 2021 in Washington, DC. (Drew Angerer/Getty Images)
--

Joe Biden is a war president, fighting enemies on at least three fronts.

With the American Rescue Plan, Biden and the Democrats are trying to end a plague that has killed at least 550,000 people in the United States.

The American economy is in ruins because of the COVID pandemic which has left at least 10 million Americans unemployed. (The actual number is much higher.) At least 10 million renters are behind by $5,000 or more. Food insecurity has dramatically increased. What social scientists and medical professionals describe as "deaths of despair" — largely meaning drug and alcohol overdoses and suicides — have also increased because of the misery and isolation of the pandemic.

Biden's third campaign is a battle to save American democracy from the Republican Party and its allies, who in 43 states across the country — most notably Georgia — are dramatically changing voting laws, in an obvious effort to stop Black and brown people and other key members of the Democratic Party's coalition from voting.

Writing at FiveThirtyEight, Perry Bacon Jr. sharply and neatly summarizes this reality: "Put another way: Georgia Republicans didn't come out of the 2020 elections with a goal of finding new messages or policies to appeal to Georgia's growing population of people of color. They instead opted to imply that these voters participated in the Georgia elections in improper ways that should be prevented in the future. The Washington Post suggests in its motto that 'Democracy Dies in Darkness.' But based on the actions of much of today's Republican Party, it might be more accurate to say it's dying right out in the open daylight."

Because the Republican Party cannot win free and fair elections, it is now trying to create a new Jim Crow-style apartheid for 21st-century America. For Republicans, the only type of democracy that is legitimate is white democracy. Unfortunately, such Herrenvolk white supremacist politics are not an outlier in American history. In reality, for most of the country's history Black and brown people have not been able to vote or otherwise participate in the polity as equal members with whites. The Republican Party, and the white right more generally, are once again proving to be revanchists, throwbacks, driven by the worst type of primitive bigotry, who want the United States to return to the worst aspects of its past. They long to turn America into a living nightmare for Black and brown people while recreating a "whites only" utopia for racists and white supremacists.

Given the United States' changing racial demography and the social and economic costs of white supremacy and other forms of discrimination, the Republicans' Jim Crow dreams pose an existential threat to the country's prosperity, security and leadership role in the world.

As historian Timothy Snyder writes in his newsletter, "Voter suppression is racist authoritarianism. Making it impossible means starting from the principle that it is everyone's individual responsibility to vote — and America's collective responsibility to make it as easy as possible for every citizen to vote."

As with Jim and Jane Crow in prior decades, these white supremacists in nice suits are also aided in their anti-democratic campaign by paramilitaries and other political hooligans wearing camouflage — or simply polo shirts and khaki pants.

As Ruth Marcus of the Washington Post writes, there is nothing subtle about this Republican attack on democracy, which must be understood as "a product of GOP desperation to retain or regain power":

Alice O'Lenick, chairwoman of the Gwinnett County election board, didn't mince words about the need to tighten up voting rules in Georgia. After the "terrible elections cycle" in 2020, when Republicans lost both Georgia Senate seats and Biden won the state's electoral votes, "I'm like a dog with a bone," she told fellow Republicans in January. "I will not let them end this session without changing some of these laws. They don't have to change all of them, but they've got to change the major parts so that we at least have a shot at winning."

Conservative lawyer Michael Carvin, representing the Republican National Committee in an Arizona voting rights case before the Supreme Court earlier this month, was equally transparent — and transactional. When Justice Amy Coney Barrett asked why the RNC was involved in the case — in particular, why it had an interest in preventing people from having their votes counted if they were cast in the wrong precinct — Carvin didn't bother to pretend this was about anything other than partisan politics.

"Because it puts us at a competitive disadvantage relative to Democrats," he said.

"Politics is a zero-sum game, and every extra vote they get through unlawful interpretations of [the Voting Rights Act] hurts us."

A shot at winning. Politics as zero-sum game. Proof positive that this isn't about the phantom menace of voter fraud. It's about making it as hard as possible for voters who aren't inclined in Republicans' favor to have their ballots cast or counted.

President Biden responded last week to Georgia's new anti-voting and anti-democracy law, describing it as "un-American," an "atrocity" and an example of "Jim Crow in the 21st century." During his White House press conference on Thursday, Biden also said that "the Republican voters I know find this despicable."

But as a war president fighting to save American democracy, Biden must not show weakness, or offer his adversaries any opportunities to counterattack. He risks being overly generous in his assessment of their intent and goodwill. In fact, his assessment of Republican voters is entirely too kind.

Public opinion and other research consistently show that Republicans and other right-leaning voters (especially Trump supporters) do not favor multiracial democracy. There is an abundance of evidence in support of that conclusion.

For example, a majority of Republicans believe (or at least claim to believe) Trump's "Big Lie" that the 2020 presidential election was somehow "stolen" by Biden and the Democrats. Other polling and research shows that Republican voters believe that voter fraud, vote theft and other irregularities were rampant — especially in Black and brown cities and other Democratic areas of the country.

Republicans also support the imposition of new Jim Crow voting restrictions in Georgia and other parts of the country — although as philosopher Jason Stanley explained in a recent interview with Salon, they have managed to convince themselves that such white supremacist laws are "protecting" and "securing" the vote.

Other research shows that Republicans and Trumpists are willing to destroy American democracy if white people are no longer the most dominant and powerful group. The Jan. 6 coup attack on the Capitol was a literal and symbolic rejection of Joe Biden and Kamala Harris' victory and the very idea of multiracial democracy in America. A large percentage of Republicans supported the Capitol attack.

Law enforcement and other experts warn there will likely be a violent right-wing terrorist insurgency campaign, which may continue for years, as a backlash against the country's increasing racial and ethnic diversity. To make matters worse, political scientists and other researchers have shown that there is a growing base of support for such a right-wing violent insurgency among middle-class white Americans.

There is other public opinion and social science research that demonstrates how white Republicans hold the delusional belief that they are the "real victims" of racism in America and that "reverse racism" against whites is a bigger societal problem than racism against Black and brown people.

Approximately 40 percent of Americans hold authoritarian values or show considerable agreement with them. White Republicans, especially Trump supporters, are more likely to exhibit such personal traits and values than are Democrats.

As president of the United States, Joe Biden must serve as the country's cheerleader, civic priest and counselor, conscience and guardian. The public's response to his efforts to defeat the COVID pandemic and the misery it has caused has been overwhelmingly positive. After all, Biden is obeying the most fundamental rule of politics: Give the people what they want.

He has chosen to be a uniter, determined to transcend the Republican Party's obstruction and assaults on democracy and the common good, in hopes of healing a country that has been badly broken and divided by Donald Trump's neofascist regime and movement.

Those intentions are noble. But Biden must still confront the fact that there are tens of millions of Americans, most of them white Republicans, who do not believe in multiracial democracy — are willing to betray it or destroy it in order to maintain their real and perceived individual and group power. This is an existential dilemma for the United States, one that has bedeviled and threatened the country's stability and future since before the founding. How Joe Biden chooses to respond to an America divided by racism and white supremacy — and by an attempted fascist coup — will be his legacy.

At this early point in his presidency, Biden has waged a successful campaign on two fronts, in seeking to control the pandemic and resuscitate the economy. But it may well be the third front — the centuries-long battle against American racism and white supremacy — where he and the Democratic Party are outflanked, with disastrous results for them and the entire country, in the 2022 midterms and beyond.