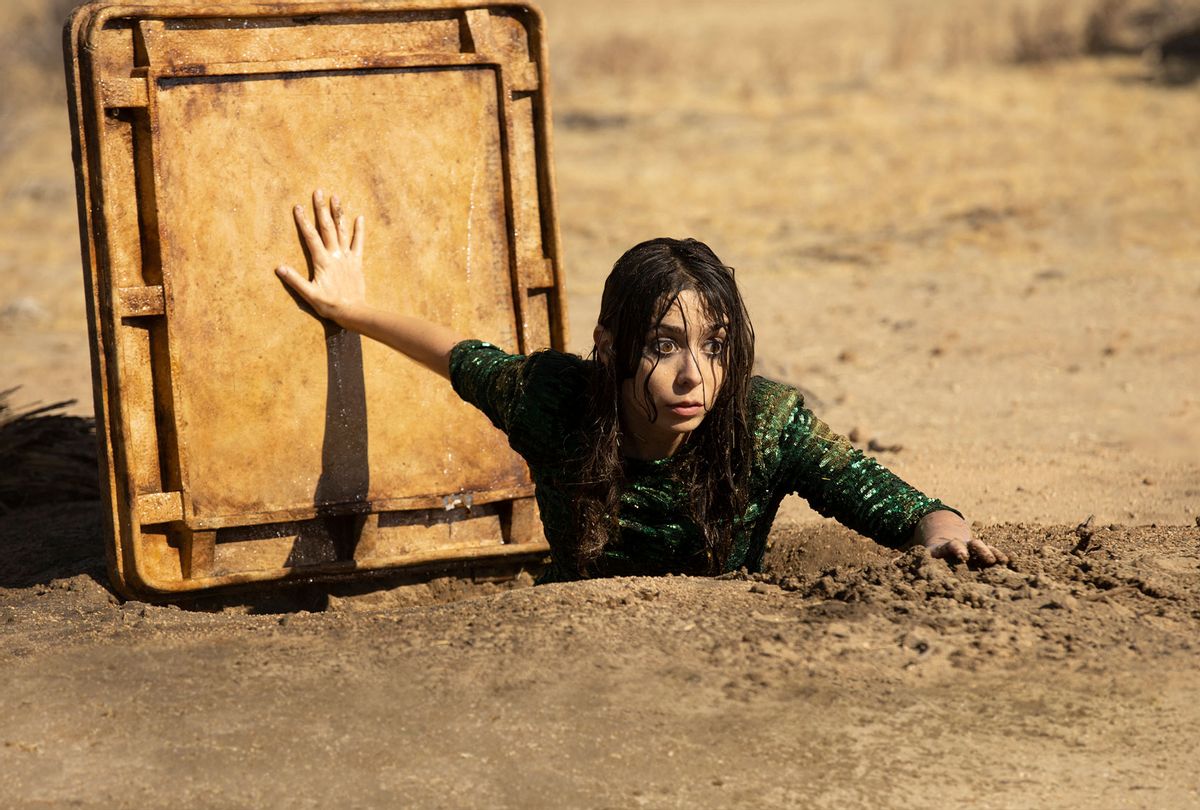 Sometimes, parts of a TV show are charming enough to distract you from its faults . . . or the plot's subtext.

HBO Max's "Made For Love" is such a case, a feather-light black comedy about a disillusioned wife attempting to escape her smothering husband. Its premise has taken a thousand and one shapes over the years by way of sitcoms, Lifetime women-in-peril flicks or dystopian trifles.

Alissa Nutting's 2017 novel inspired this fast-paced tale, which is energized by winning performances from Cristin Milioti and, further into the season, Ray Romano. Nevertheless "Made For Love" never manages to ascend beyond something more than conventional buddies-on-the-run comedy within the four episodes made available to review.

Milioti is engaging enough to buy forgiveness despite the show's shortcomings until you're well into the season. A lot of passable half-hour shows coast on the charisma of such stars, and to the credit of "Made For Love" there's also more going for it besides the names at the top of its credits. But at first it's tough to discern what's hounding Milioti's Hazel Green, introduced when she emerges from the ground in the middle of the desert, dripping wet and flipping off a building in the distance.

How did she get there? What made her so angry? Why is she wearing a green sequined dress unsuitable for wilderness hiking?

Enter the overly employed time-jumping trope known as in medias res, with the writers dropping us into the midst of Hazel's first major anxiety before yanking us backward to recapitulate the 24 hours leading up to it. This glimpse into the near past shows Hazel living in a virtual Elysium called The Hub created by her husband, tech bazillionaire Byron Gogol (Billy Magnussen). The presumably happy couple hasn't left The Hub in 10 years. It's also the base of operations for Byron's tech company Gogol – yes, like Google – which manufactures an array of devices and employs a cadre of sycophants.

Byron is on the verge of debuting his greatest innovation, a chip called Made For Love that syncs two minds into one, when Hazel realizes she's had it with a life structured by optimization. No one could blame her, since her every waking move is guided by an Alexa-type device, and her husband insists she submit star ratings on all of her mundane experiences so he can track their quality . . . including her orgasms.

What she doesn't know until she makes her escape is that Byron has already installed Made For Love into her brain. That means she can run from him, but he can see where she is, where she's going and everything she does.

Hazel's situational predicament reflects the devil's bargain offered by technological innovation and optimization: in exchange for an easy life Hazel loses her freedom, privacy or even her space for independent thought. She only understands this once she physically attempts to opt out.

Seeing "Made For Love" as such a metaphor invites us to appreciate it as a clever twist on the "woman on the verge" narrative, and Milioti's appeal plays into this quite well.  She's portrayed women reminiscent of Hazel recently in "Palm Springs" and a couple of years ago in the "Black Mirror" episode "USS Callister", where her incel tormentor robs her character of her agency and her genitals.

Milioti pours a portion of that anger into Hazel here while also presenting to us a woman made to rediscover the larger imperfect world while examining her own flaws, and her trembling vacillation between fight or flight dread in the opening episodes makes a satisfying shift over to exhausted and livid resolve once she completely grasps her situation.

This visceral aspect of Milioti's performance also makes "Made For Love" translate as a story about stalking and physical violation. In their marriage Hazel is less of a wife and a partner than a controllable device through which Byron receives pleasure and satisfaction; her rage and horror at realizing he meant their marriage vows as an agreed upon set of terms and conditions is jaw-slackening but also fitting. To normal humans the marriage contract is a set of agreed upon guarantees and permissions forged and guided by feelings and sentiment.

But if you don't have a heart or soul, they are a set of parameters to be interpreted to the extent of what a person can get away with. In the case of Byron and Hazel, that means he feels free to submit his wife to an invasive medical procedure to placate his ego. Depending on the type of person that you are it may be tough to find the light side of this even with all the biting punchlines and dark physical humor surrounding it –but no judgment!

One of those repeating gags involves Hazel's aggressive defense against Byron's head of security Lyle (Dan Bakkedahl), the main one pursuing her after she escapes. Lyle keeps on coming with Terminator-like determination even though he plainly feels all the pain she inflicts on him, which is not insignificant. Bakkedahl's comedic brilliance serves him well in these scenes.

Meanwhile Romano's Herbert, Hazel's father, provides contrasting commentary on how easily people can replace flesh and blood relationships with synthetic ones. Hazel turns to her widower father after a decade without contact and discovers a man who lost his wife to cancer and has found solace and a partnership with a life-sized sex doll he's named Diane.

Through Romano's sensitive portrayal, we're made to see the difference between good and bad relationships comes down to the care one partner shows towards another, and by extension, the people in their larger community. Herbert is the opposite of the man his daughter married, who may be a genius in the usual ways but shows himself to be an ignoramus when it comes to basic human interaction.

Nutting is an executive producer on the series, and through showrunner Christina Lee realizes Byron as an obvious stand-in for any tech titan unburdened with a soul or a conscience. Magnussen endows his character with the requisite Mark Zuckerberg-esque artificiality we've come to expect from billionaire tech bros, making Byron a creature of perpetual tension even when he puts on a happy face. There's never a time where the actor's performance isn't wholly disconcerting, even in pathetic moments, such as when Byron's fawning assistant (Caleb Foote) has to explain to him what a donut hole is.

Of course, Byron doesn't take pains to hide his sociopathy. Early on he watches violence erupt as people fight to get their hands on the latest Gogol release, lamenting that there weren't more injuries. Rioting is a type of data point, you see – and data is a firm way to measure consumer passion for a product.

This augments the frazzled humanity in Hazel, a woman whose frustration and anger Milioti expands as wide as her shocked gaze as the tangible threads of her reality fall together beyond her flawless prison.

All of this conspires to make "Made For Love" watchable even though the story itself is ultimately forgettable. For all that it purports to say and do (and despite potentially triggering aspects of Hazel's great escape) the story comes off as a standard narrative about our inability to outrun the choices we've programmed into our lives, realized as a succession of road trip legs.

Beyond this isn't much profundity save whatever meaning we assign to the people navigating it, which gives it about the heft of a cinematic or a sim. And that's a fine distraction for a week or two, but not worth any long-term emotional commitment.