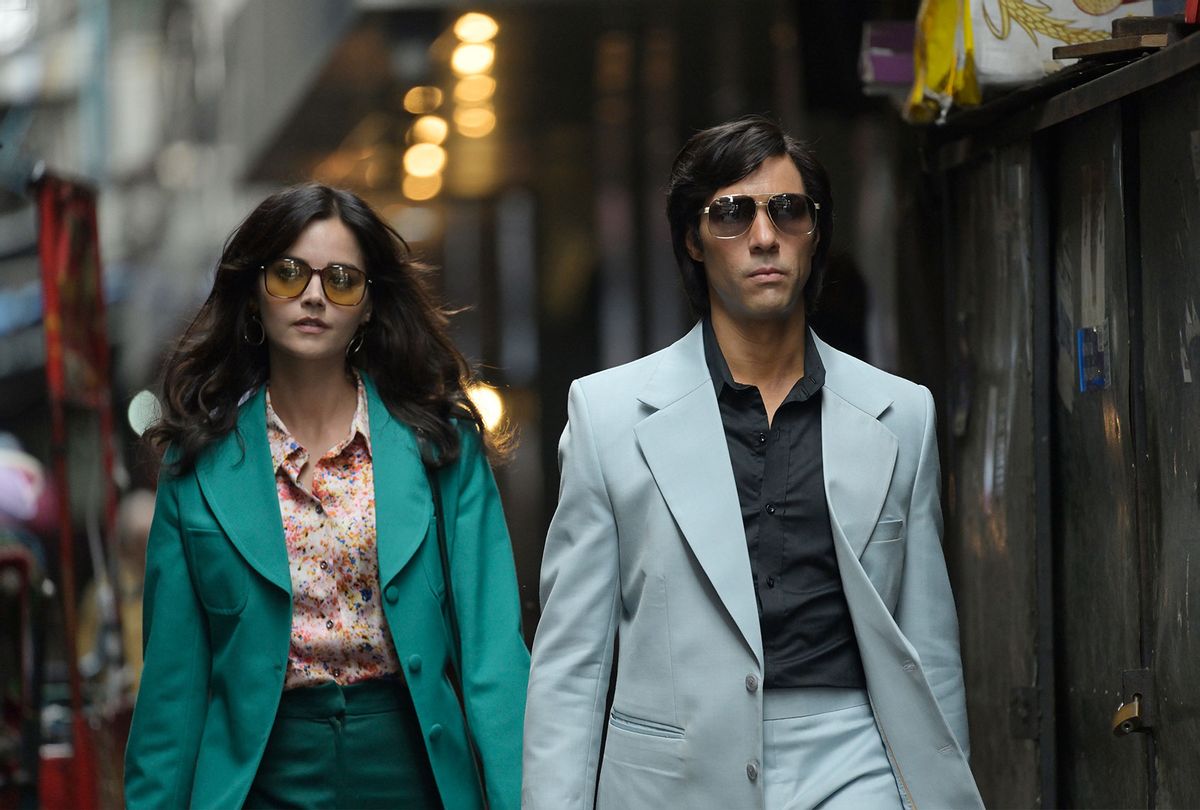 Jenna Coleman and Tahar Rahim in "The Serpent" (Netflix)
--

Netflix's drama "The Serpent" builds real-life serial murderer and con artist Charles Sobhraj's world with a shrewdness the attentive viewer can't help but appreciate at times, if only for a limited span. A few such instances occur in the second episode where Sobhraj, played by Tahar Rahim ("The Mauritanian") seduces Marie-Andrée Leclerc (Jenna Coleman) away from the man she's traveling with. Sobhraj is sexy and mysterious and voraciously flirts with Leclerc, who is then a dreamy young woman from Quebec curious about the world.

As their affection grows one of Serge Gainsbourg's more notorious tunes thumps in the background – but not "Bonnie and Clyde." That would be too on-the-nose for a couple of lovers and co-conspirators in a theft and murder racket. Instead, the music supervisor offers a subtler commentary by setting the blossoming of their love affair to "Requiem Pour Un Con," a title many English speakers understand to mean "Requiem for a Con" but a French person may translate to "Requiem for an A••hole."

Either way works since it's a tune dripping with contempt and insult. Most people don't realize that because most people don't listen closely to the lyrics or bother to look up what Gainsbourg is saying – the libidinous bassline, the teasing guitar lick and hungry drumbeat are saying something else entirely. That's the part that gets inside of a person's head to the point that nothing else matters, making it an appropriate theme song for these two.

This is but one example of the small details supporting the work Rahim, Coleman, the set designers and directors Tom Shankland and Hans Herbots do to conjure the ambience of 1975, a time in the world defined by aimlessness and disillusion. "The Serpent," based on a series of actual crimes, depicts the 1970s as the previous decade's dirty hangover, and flaunts the naivete of privileged white kids too young to have experienced the supposed countercultural nirvana promised by late '60s but wealthy enough to pursue it by way of international travel.

Scores of such souls backpacked across a route in Asia that came to be known as the Hippie Trail, where Sobhraj and Leclerc crossed paths with and murdered at least a dozen, stealing their money and passports to enable them to move between countries without being traced.

"The Serpent" presents Sobhraj, who is currently living out his golden years in a Nepalese prison in real life, as a young keen, non-nonsense gem broker with Leclerc at his side as his fashionable, doting wife – the face cooing over wandering but not yet lost lambs. Together they lure in bohemian travelers with their unusual combination of earthy generosity and flashiness, winning their trust before Sobhraj poisons them to incapacity.

Rich visuals capturing the lush beauty of Thailand dazzle us all the while, even as we accompany Sobhraj's victims into his hazy lair where the party never ends and a revolving door of backpackers fall ill and disappear, never to be heard of again. For all of the ways it falls short one "The Serpent" is beautiful, without question, as are its co-stars.

Peel back the façade, however, and there isn't much to explore beyond the filthiness of the crimes and the frustration tying up Sobhraj's pursuers at every turn, namely Herman Knippenberg (Billy Howle), a junior diplomat at the Dutch Embassy in Bangkok who can't let go of a plea from one vanished couple's family to find them. Knippenberg's boss advises him that solving mysteries isn't his job, but something about this request bores into his brain, and he also realizes that the local cops will do nothing.

With the help of his wife Angela (Ellie Bamber) and a fellow Belgian diplomat Knippenberg finds his lost hikers, and although their story doesn't have a pleasant ending their misfortune is only the beginning of his hunt.

If this reads as an entirely formulaic cat-and-mouse mystery thriller well, there's "The Serpent" for you. Breaking it down in such a linear fashion is deceptive, however, since a central irritant with this series is the script's incessant leaps back and forth through time – a few months ago here, then a few months later there, eventually jumping around over the space of years.

The cold open is set during a 1997 interview with an American reporter who can't get Sobhraj to explicitly admit to killing anyone on camera, as if any killer would do so intentionally. But this sequence also allows us to see how emotionless and icy Rahim makes Sobhraj becomes in late middle age, when he has convinced himself that he's untouchable.

Most of the limited series' eight episodes covers a small capsule of time during which Sobhraj still exhibits a few droplets of humanity, enough to win the trust of young, naïve travelers drunk on the foreignness of their surroundings. This would be sufficient to lock in one's interest if writers Richard Warlow and Toby Finlay reduced the chronological leapfrogging and expanded their examination of Sobhraj character and what made him tick beyond his cultural background.

Much of his psychological profile hinges on his feeling of being an outsider; he was born to Vietnamese and Indian parents and raised in France, and occasionally sneers at the excess that white travelers display when they visit Asia, presenting this disdain to his conspirators as an excuse to rob, poison and kill them. Though Rahim works to play up the inky evil underneath his character's impenetrable presentation the script doesn't seem to give him much in the way of unspoken, deeper-seated impulses that he could tap into.

Then again, part of the reason Sobhraj's story has inspired three books and two films made before "The Serpent" is because so much about him is unknowable and he got away with so much outrageousness as to ostensibly make the why of what he did beside the point.

But this is the problem with spending eight episodes following a charismatic, lethal figure during a compressed timespan. After a point the grift and murders cease to shock and a person may start wondering what truly drives a man like Sobhraj. His extremity is the melody, but the words describing his soul don't appear to be anywhere in the script.

Rahim and Coleman exude a leonine elegance as Sobhraj and Leclerc, and Howle is solid as their adversary, especially since for most of the series they're barely aware of who he is. As for the Asian characters besides Sobhraj's Indian accomplice Ajay Chowdhury (Amesh Edireweera ) who is painted as your basic seedy sidekick . . . there aren't any which, given that the story is set in Thailand about a South/Southeast Asian serial killer, should tell you something about whose interiority and emphasis Warlow and Finlay decide is worth exploring here and who they deem worthy enough to be part of the scenery.

A more overwhelming annoyance, exacerbated by the quick switchbacks across months and years, is the feeling that the crime story and the hunt are operating as two separate, shallow story streams. Knippenberg is all determination and little else; Bamber's Angela is a creature of patient loyalty who occasionally snaps, and eventually they land on the heels of their quarry.

Having said that, critics may be more tired of serial killer tales than the average viewer, who seems to have an endless appetite for them. This retelling would seem to have everything that audiences could possibly want – travel, seduction, danger, and enough beauty to offset the frequent bouts of projectile vomiting. And while there might not be enough of a grip here to ensnare you in a full true crime binge, enough people may find "The Serpent" and its namesake a palatable enough to consume few small doses at a time.

"The Serpent" premieres on Friday, April 2 on Netflix.