This year's hot cross buns should be sourdough

Hot cross buns pop up around Easter and are most commonly associated with their place of origin, the United Kingdom 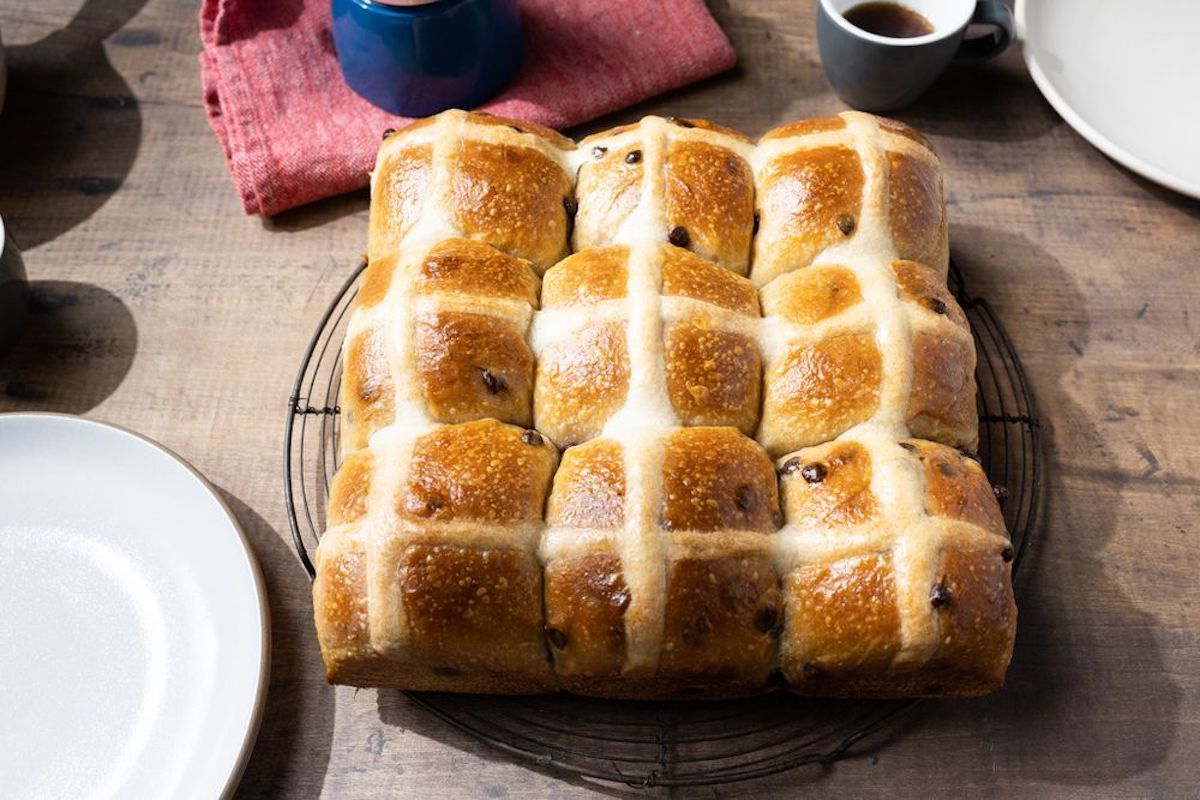 The Perfect Loaf is a column from software engineer turned bread expert (and Food52's Resident Bread Baker) Maurizio Leo. Maurizio is here to show us all things naturally leavened, enriched, yeast-risen, you name it — basically, every vehicle to slather on a lot of butter. Today, he tells us how to turn classic hot cross buns into tender, slightly tangy, chocolatey hot cross buns.

At the right time of year and in the right location, you can smell hot cross buns — leavened sweet buns spiked with spices and dried fruit — before even making it inside a bakery. Usually topped with a sweet glaze and a white cross of flour and water, hot cross buns pop up around Easter and are most commonly associated with their place of origin, the U.K. Admittedly, I have never seen them grace a pastry case out here in the southwestern U.S., but I recall seeing their bright white crosses in bakeries during my travels through Europe in years past.

It's safe to say I'm happy to have rediscovered these beautiful buns lately, because when baked well, they are hard to resist. They have all the right components for a festive treat: sweetness from the sugar in the dough, dried fruit, and simple syrup glaze; spice from the cinnamon, nutmeg, and allspice; and a tender texture and richness from the butter and egg. For me, a good hot cross bun has the spice of an oatmeal cookie, the texture of a soft dinner roll, and the sweetness of a cinnamon bun.

Typically, hot cross buns are leavened with commercial yeast, which gives them their tall rise and light interior. My approach to these — of course — is 100% naturally leavened, using a sourdough starter.

But first, let's take a look at what else sourdough does when making hot cross buns.

What does sourdough bring to bot cross buns?

While I might be biased, I think sourdough always carries a welcome depth of flavor that isn't generally found in recipes that rely on commercial yeast and require a shorter rise time. The lengthy fermentation time needed for sourdough starter (or a starter-based levain) to acidify and make dough rise produces organic acids: the longer the fermentation time, the greater the acidity — and complexity of flavor.

The acid by-products of lengthy natural fermentation indeed make for a more delicious bun, contributing to the dough's tender interior and helping awaken the palate to other flavors in the treat — I like to think of it like adding vinegar to a salad or a splash of lemon juice to steamed vegetables. For a bonus, the acids also lend nutritional benefits, namely by helping to break down the dough's gluten, which makes it more digestible, improves glycemic response, and helps unlock nutrients in the grain for better absorption by our bodies.

Converting a yeasted product to be 100% naturally leavened can bring challenges. In this case, the dough has a relatively high sugar percentage, which can inhibit fermentation activity. Sugar, being hygroscopic, robs yeast cells of the water necessary for fermentation. Having a little sugar in a dough can help spur fermentation as a kind of "fuel" (you may know this if you've added a pinch of sugar to a bowl of warm water or milk and commercial yeast), but as the sugar percentage in a dough increases, the fermentation activity decreases. If you've ever baked sourdough cinnamon rolls or another heavily enriched dough, you'll know just how sluggish it can be — sometimes requiring several hours more rise time than a leaner dough (one with no butter, sugar, or eggs).

Why doesn't commercial yeast have this problem? Compared to natural leavening, typical instant yeast doesn't suffer from this because it's created to be resilient even in the face of high sugar concentrations. This type of leavener is what you'll typically found in pastry applications and other enriched doughs. But this doesn't mean we can't use sourdough for sweet baked goods; we just need a few adjustments.

The first step to making hot cross buns is to swap out the commercial yeast with a sourdough starter; but to further dial things in, we can make a dedicated levain specifically for these buns. Making a dedicated levain helps skew the ratio of bacteria to yeast in the desired direction. In this case, we're looking for increased yeast activity (for a strong rise) and decreased bacterial activity (to reduce sourness — great in sourdough bread, not as desirable in hot cross buns).

Let's take a look at the three things I focused on when developing my sourdough hot cross bun recipe: Ensure fermentation activity is vigorous by increasing preferment percentage, increasing fermentation time, and reducing excessive acidity. Let's break it down.

When baking with commercial yeast, you might only need around 1% yeast to total flour in the mix. But with natural leavening, which is not quite as potent, we need a large preferment—which in the case of sourdough is our sourdough starter or levain — to ensure vigorous fermentation from the start and to avoid excessively long fermentation times. Typically, with a sourdough bread recipe (without any sugar in the dough), my preferment percentages are around 15 to 20%, but because this hot cross bun dough has a high percentage of sugar to total flour (8%), I increased the levain percentage to 37.14%.

By increasing the preferment percentage, we start with a higher bacteria and yeast population. This increase means from the beginning, there will be more "workers" helping to ferment the dough, speeding up the timeline to ensure the dough is fully fermented by the time it goes in the oven.

Despite the increased preferment for this recipe, it's also necessary to increase the fermentation time. Since we're using natural leavening instead of extremely potent commercial yeast (which isn't affected by sugar in the dough), it takes longer. But this is a good thing! A longer-running fermentation time ensures the bacteria has enough time to do its work, creating the organic acids that add flavor and aid digestion.

While some acidity is a flavor boost, excessive amounts — especially in a sweet application like these buns — can be overpowering and detract from the eating experience. To keep acidity low, I first settled on using all white flour (instead of whole-wheat flour) — in this case, higher-protein bread flour. Not only will this flour ensure a tall rise and fluffy texture, but white flour also has less bran and germ present from the wheat berry, which helps limit the sour flavor in these buns. The bran and germ act to buffer the dough's total acidity during fermentation, allowing bacteria to function for much longer before their activity begins to wane (bacterial activity decreases as pH decreases): The longer bacteria functions, the more acidity in the final baked product.

To further reduce acidity in the dough, I add a small amount of sugar to the levain, limiting bacterial cell count while it's ripening. Most bacteria are negatively affected by sugar, so adding a small amount to the levain skews the levain to be more yeast-dominant, reducing the final dough's total acidity.

Now we're on our way toward a hot cross bun with classic texture and a slight sourness that keeps luring you back, bite after bite. This brings me to one more adaptation:

Swap the dried fruit for chocolate — if you dare

Traditionally, hot cross buns are loaded with dried fruit, typically raisins, cranberries, apples, or even a mix. In my take, instead of the dried fruit, I use chocolate to bring additional sweetness — and a little bitterness — which pairs wonderfully with the added spices (cinnamon, nutmeg, and allspice) and orange and lemon zests. While chocolate might not be a traditional addition to these hot cross buns, after trying it, I wouldn't have them any other way.