West Virginia gave John F. Kennedy a massive boost toward the White House. My, how times have changed 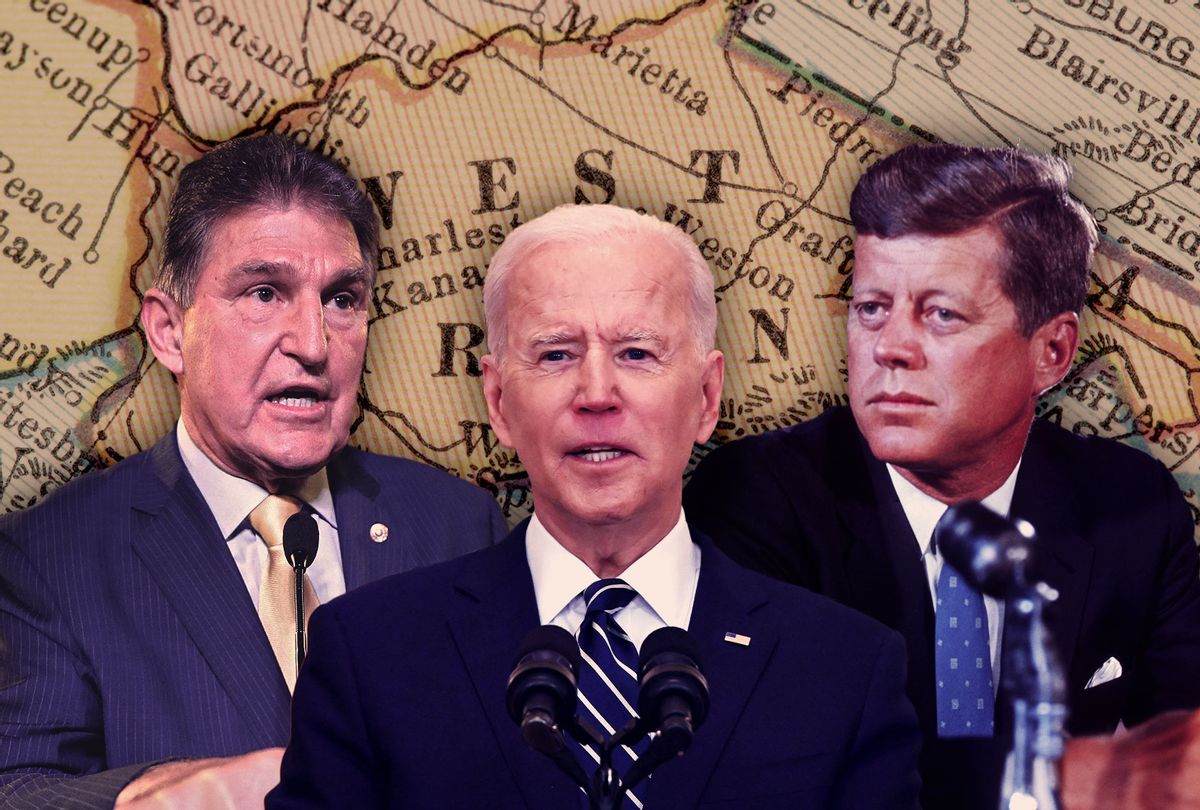 Once upon a time, West Virginia Democrats played a crucial role in making their party more inclusive and breaking down the barriers of prejudice.

Tragically, the opposite appears to be true today. There is little question that the most powerful Democrat in the state is Sen. Joe Manchin III, who has been in the Senate since 2010 and previously served as West Virginia's governor and secretary of state. He voted with Donald Trump roughly half the time during the latter's tumultuous presidency and has been a thorn in the side for the Democrat who followed him, Joe Biden. Because Democrats only control the 50-50 Senate by virtue of Vice President Kamala Harris' ability to cast tie-breaking vote, they need every single member of their caucus to support Biden's agenda.

Manchin knows this and has used it to maximize his power and leverage. He pressured the party to cut the amount of unemployment relief in its recent $1.9 trillion stimulus bill. Back when the bill might have included a minimum wage increase, he wanted to reduce it from $15 an hour to $11 an hour, then voted against the $15 increase included in the final package. Perhaps most significantly, he has been one of the staunchest supporters of the filibuster, a legislative trick that Republicans can use to stop Democrats from protecting voter rights, fighting systemic racism, advancing LGBTQ causes and combating climate change.

Manchin has the freedom to do this because West Virginia is a reliably Republican state, and Democrats know that if he quits or is defeated, his replacement would almost certainly be a Republican. The state has backed the Republican presidential nominee in every election since 2000, with more than two-thirds of its voters supporting Trump in both 2016 and 2020. Yet once upon a time West Virginia was solidly Democratic, and played a crucial role in dismantling a major prejudice in American political life.

Until the election of John F. Kennedy in 1960, no Roman Catholic had ever been president. (Although by that time, Catholics were easily the largest single religious denomination in America.) In his Pulitzer Prize-winning book "The Making of the President — 1960," journalist Theodore H. White explored how Kennedy struggled to win the Democratic nomination because party leaders were convinced that most white Protestant voters would never back a Catholic candidate. In those days state primaries were fewer and less important to the nomination process, but Kennedy believed that he had to win over Protestant voters in those contests to prove his vote-getting ability. His first major effort, in the Wisconsin primary, was a wash: He won the state over Sen. Hubert Humphrey of Minnesota, but did so mainly by winning in predominantly Catholic areas.

That's when the next state on the primary calendar, West Virginia, entered the picture.

West Virginia was then an overwhelmingly white and Protestant state, and is only slightly less so now. (The state's current estimated population of just under 1.8 million is roughly 92% white and 88% Protestant.) It was widely believed that West Virginians had rejected New York Gov. Al Smith, the only previous major-party Catholic nominee, in the 1928 election because of anti-Catholic prejudice, and political reporters encountered similar pockets of mistrust in 1960 as well. Kennedy believed, reasonably enough, that if he lost West Virginia, his campaign was doomed. But if he won, that might prove a Catholic was electable.

Unlike Humphrey, Kennedy had a well-financed campaign, but on the ground in West Virginia, that wouldn't be enough. He had to do something to tackle the religious issue directly. White's telling of the story is so eloquent it ought to be quoted in full:

It was up to the candidate alone to decide. And, starting on April 25, his decision became clear. He would attack — he would meet the religious issue head on.

Whether out of conviction or out of tactics, no sounder Kennedy decision could have been made. Two Democratic candidates were appealing to the commonality of the Democratic Party; once the issue could be made one of tolerance or intolerance, Hubert Humphrey was hung. No one could prove to his own conscience that by voting for Humphrey he was displaying tolerance. Yet any man, indecisive in mind on the presidency, could prove that he was at least tolerant by voting for Jack Kennedy.

Humphrey, to be fair, was opposed to all forms of bigotry and never tried to defeat Kennedy by appealing to anti-Catholic prejudice. Yet by sending the message to West Virginians that they could display tolerance by voting for a New England Catholic to the presidency, and by campaigning tirelessly throughout the state, and performing strongly in both a televised speech and a one-on-one debate with Humphrey, Kennedy won a starting victory, with 60% of the vote.

That was the moment, most scholars agree, when Kennedy became the Democratic frontrunner and was launched on the path toward becoming America's first Catholic president.

No doubt anti-Catholic prejudice still exists in America, but Kennedy's election did a great deal to demolish it, and last year Joe Biden became the second Catholic elected to the presidency. Joe Manchin himself is a Catholic, a notable fact in a state where that faith only comprises 6% of the population. Yet over the years West Virginia has drifted decisively toward the right, and has not supported a Democratic presidential nominee since Bill Clinton in 1996. Manchin is now the only statewide elected Democrat, and it's likely fair to consider him the most conservative Democrat in the Senate.

None of that is likely to change in the immediate future, but West Virginia Democrats say they see hope. Donald Trump, after all, was elected in part by promising to bring back mining jobs to West Virginia and other major coal-producing states — a promise he had no way to deliver. If Biden can implement his economic agenda and lift thousands of struggling West Virginians from poverty, it may become possible for populist Democrats like Richard Ojeda to advocate for the state's working class while avoiding the racist excesses of Trumpism. A better future for West Virginia is possible, and will become more so if the state can remember the most important lessons of its past.